Accessibility links
In The Abortion Debate, Rigorous Empathy And Common Ground Two national advocates on opposite sides of the abortion rights movement disagree on policy, but agree that the labels that define the debate — pro-life and pro-choice — are insufficient. 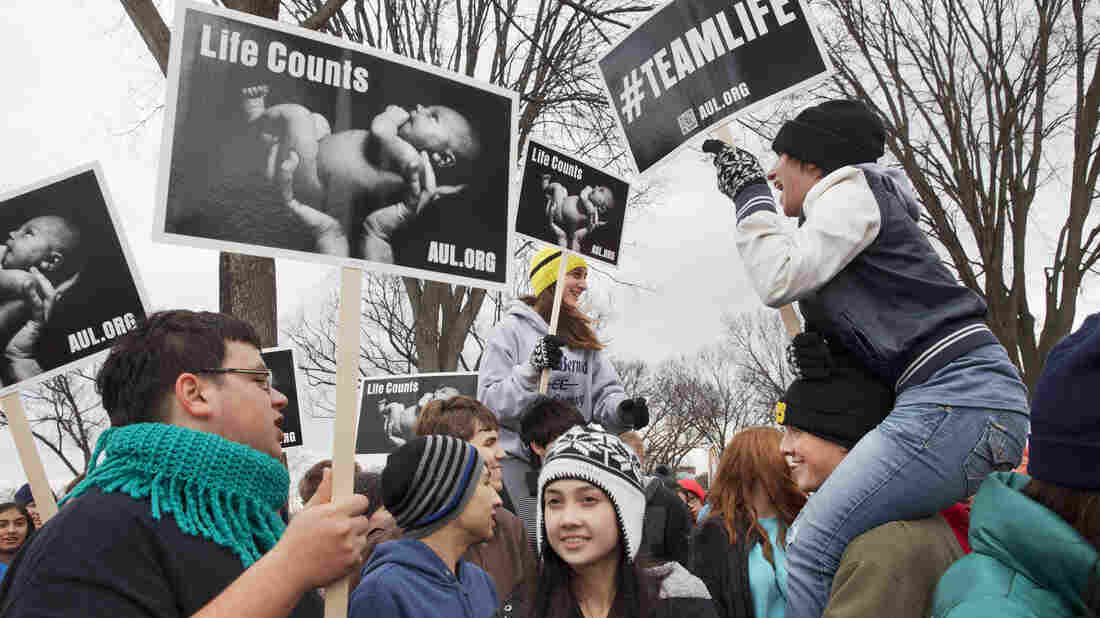 Rosie Mami (center) and her sister Ayleana Mami, 19, of Cullman, Ala., (right), sit on their friends' shoulders as they lead a chant about loving babies, with other members of St. Bernard Prep, as anti-abortion demonstrators rallied at the annual March for Life, Jan. 22, 2015, on the National Mall in Washington. Jacquelyn Martin/AP hide caption 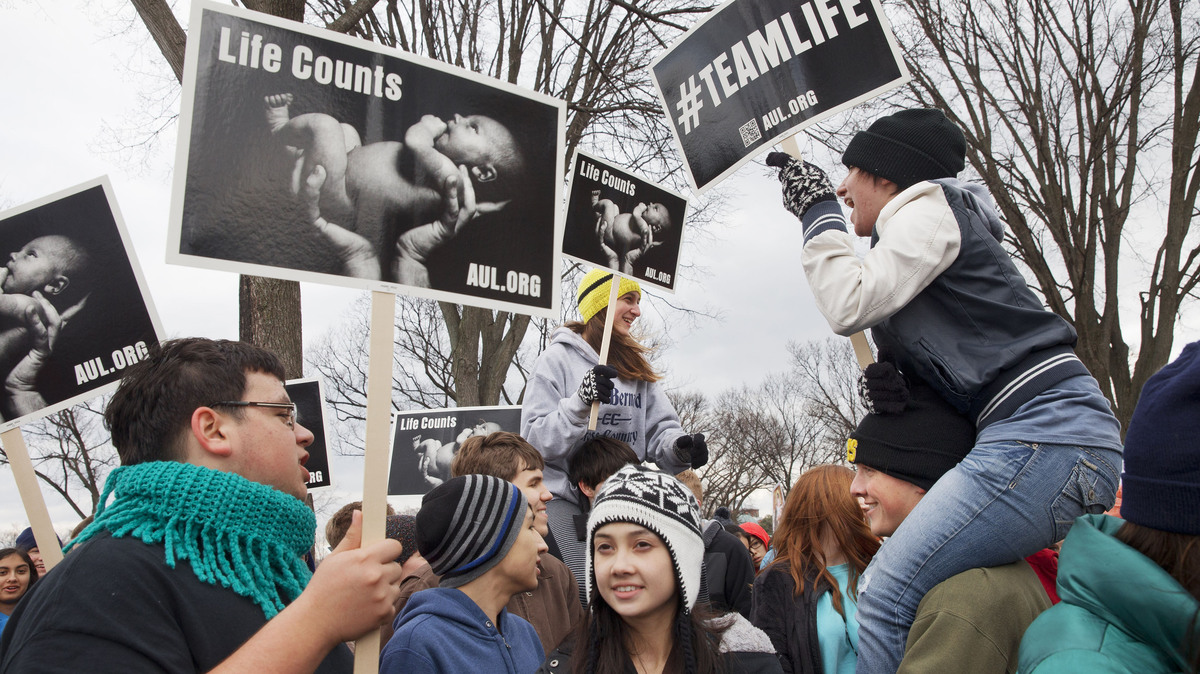 Rosie Mami (center) and her sister Ayleana Mami, 19, of Cullman, Ala., (right), sit on their friends' shoulders as they lead a chant about loving babies, with other members of St. Bernard Prep, as anti-abortion demonstrators rallied at the annual March for Life, Jan. 22, 2015, on the National Mall in Washington.

Last week, the abortion rights movement marked a win in North Carolina, when the high court turned down a request to revisit a North Carolina law requiring women to have an ultrasound before undergoing an abortion.

Opponents of abortion rights had their own win in Texas: A federal appeals court in upheld key provisions of a strict abortion law, possibly leaving only a handful of abortion clinics to operate in the state.

Late Friday night, a group of clinics filed a petition asking the Supreme Court to suspend that ruling.

The political strategy of both sides in this debate has evolved.

This week on For The Record: The Long Battle over Abortion. We talk to two women who have been on the front lines of this fight for the past decade. Click the audio link on this page to hear the full conversations. 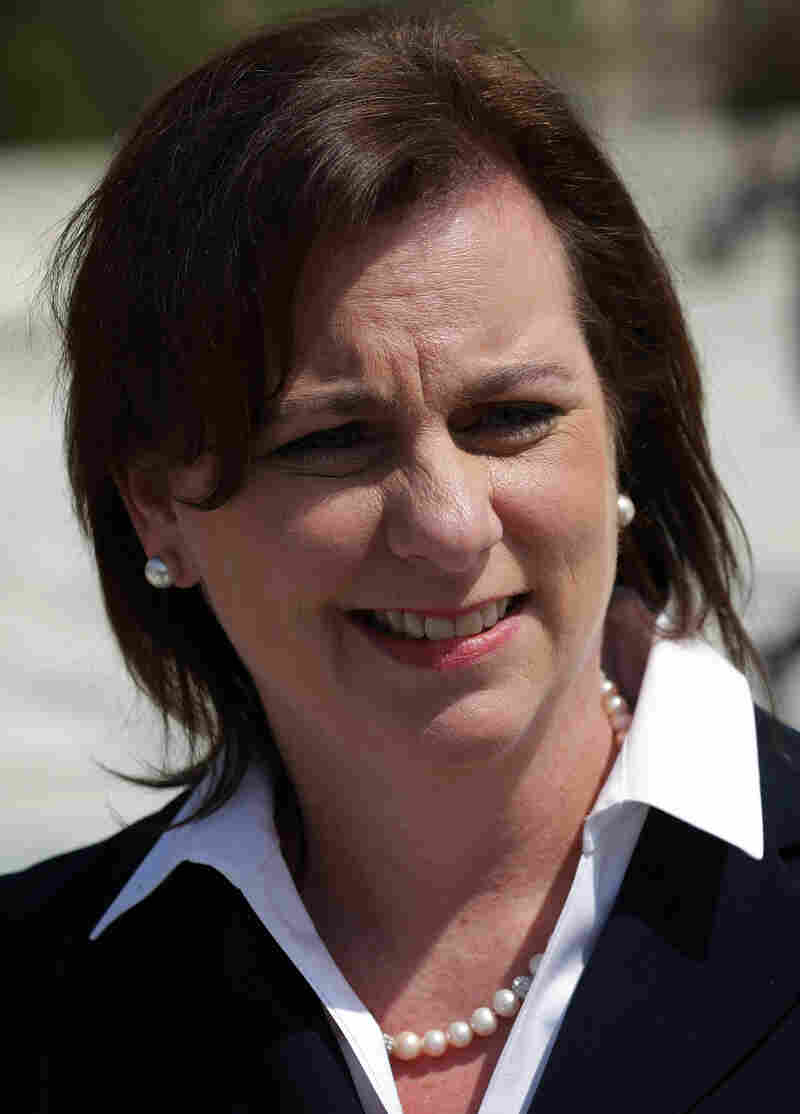 Marjorie Dannenfelser, president of the Susan B. Anthony List

"Susan B. Anthony List was founded to give voice to women who feel very strongly that the pro-life position is the natural place for women," Dannenfelser says.

Dannenfelser grew up in a family that debated the big issues of the day, she says, and when she was younger she supported abortion rights. When she got to college, she got involved with the young Republicans group on campus and eventually she changed her mind.

Richards traces her personal connection to the abortion rights movement back to her first experience with the organization she would end up leading.

"I remember my first trip to Planned Parenthood for birth control was in college in Providence, Rhode Island," she says, "far away from my home of Texas." 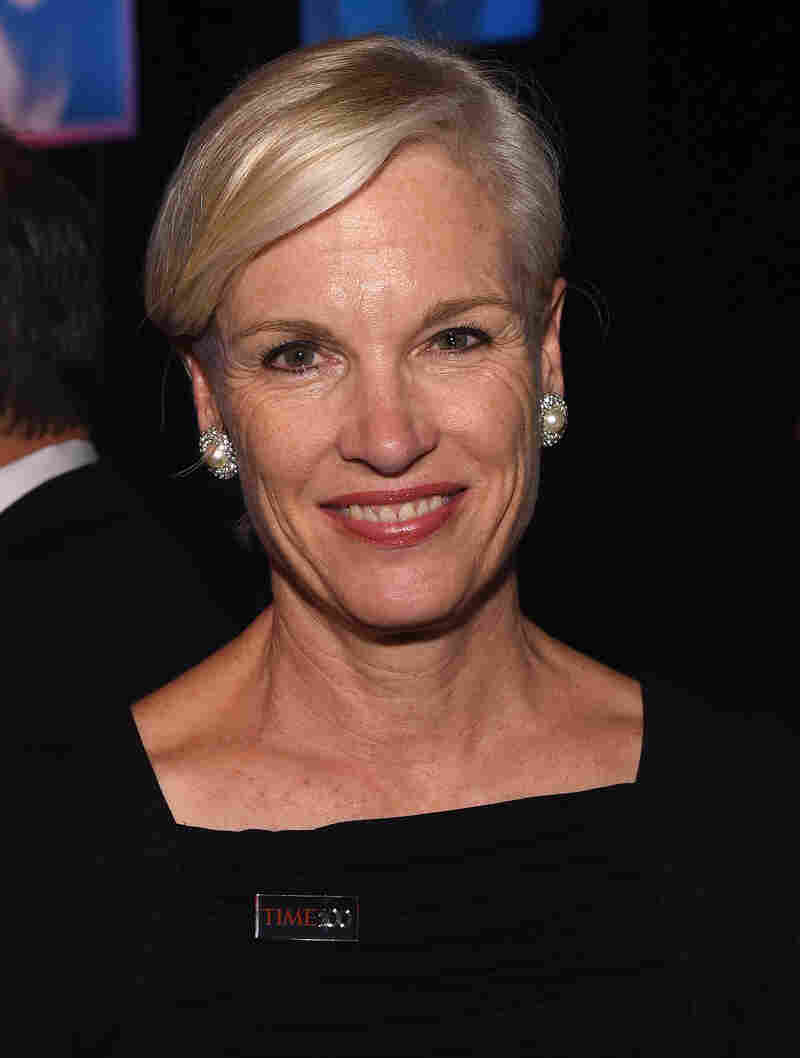 Texas, where her family was very active in Democratic politics. Her mother, Ann Richards was the nationally well-known governor of the state — and a supporter of the abortion rights movement.

While Roe v. Wade makes abortion legal across the country, in recent years the anti-abortion movement has waged challenges to abortion laws at the state and local level.

Instead of battling over whether or not abortion should be legal, Dannenfelser and her fellow activists have been fighting over questions like, "What is the method that is appropriate to abort?" she says. "Who needs to be consulted before the child is aborted? How much information should a woman know? What should we be insisting that clinics do in terms of the safety of mothers?"

On the abortion-rights front, Richards says, her group meets all the other side's challenges.

"I'm very proud of the fact that we stand and fight, and stand for women, and most particularly in those states where there may be no one else standing," she says.

Both women believe that the ideological labels that have come to define the debate — pro-life and pro-choice — are insufficient.

"Many, many pro-choice people don't say, 'Yes, I'm pro-choice, but of course I'm not for late-term abortion,' " says Dannenfelser. "At some point, the labels start to fade in their significance, and the actual policy matters far more."

Richards says, "There are people who, if they had to pick a political label, they would say that they might be personally pro-life, but in fact, when it comes down to it, they believe that women should make decisions of their pregnancies, not politicians and not government."

Both advocates say they don't let their positions on abortion interfere with their personal relationships.

"Oh not at all," says Richards. "I actually think that part of the strength of not only Planned Parenthood but this work is rigorous empathy, and I believe that's what makes this organization and this movement stronger."

Dannenfelser says she has friends and family who disagree with her on abortion.

"Oh continually, and actually I was truly blessed to have lived in a situation where disagreement, even on such a profound issue, did not alienate," she says. "And I don't believe that should be true. I think if we're going to get to some common ground it can't be true."