Accessibility links
Snapshot Sleuthing Confirms Russian Military Presence In Ukraine Like young adults everywhere, soldiers in the Russian military are fond of documenting their doings via social media. One journalist traced a soldier's presence in Ukraine through his photos online. 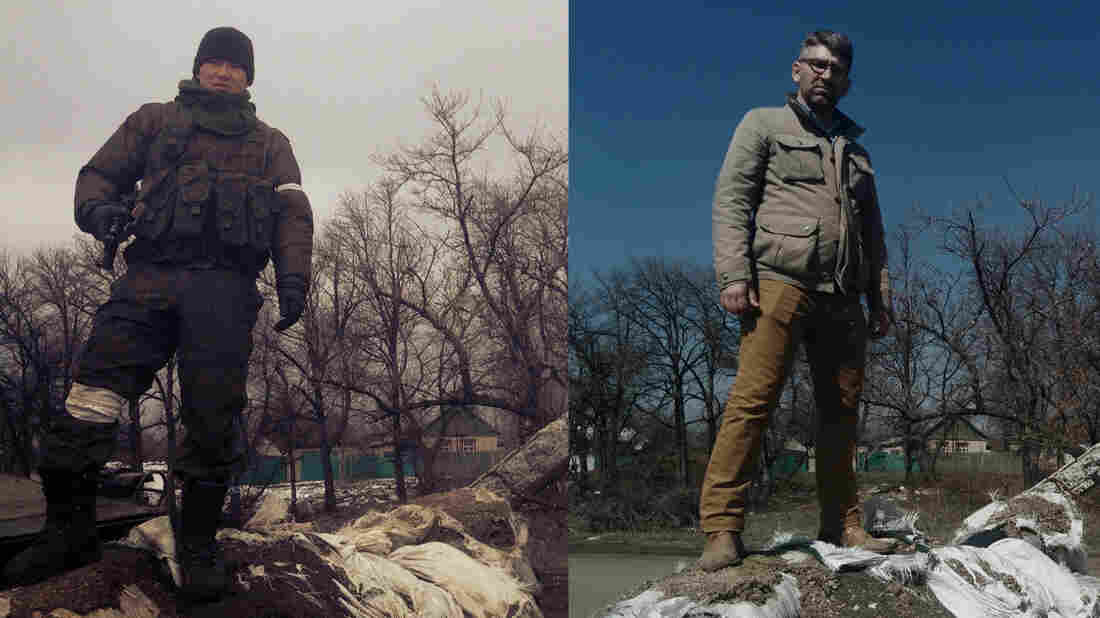 A soldier in the Russian army posed, rifle in hand, for a snapshot at a battlefield checkpoint. Simon Ostrovsky, at right, located the same spot in Vuhlehirsk, in Ukraine's Donetsk region. VICE News hide caption 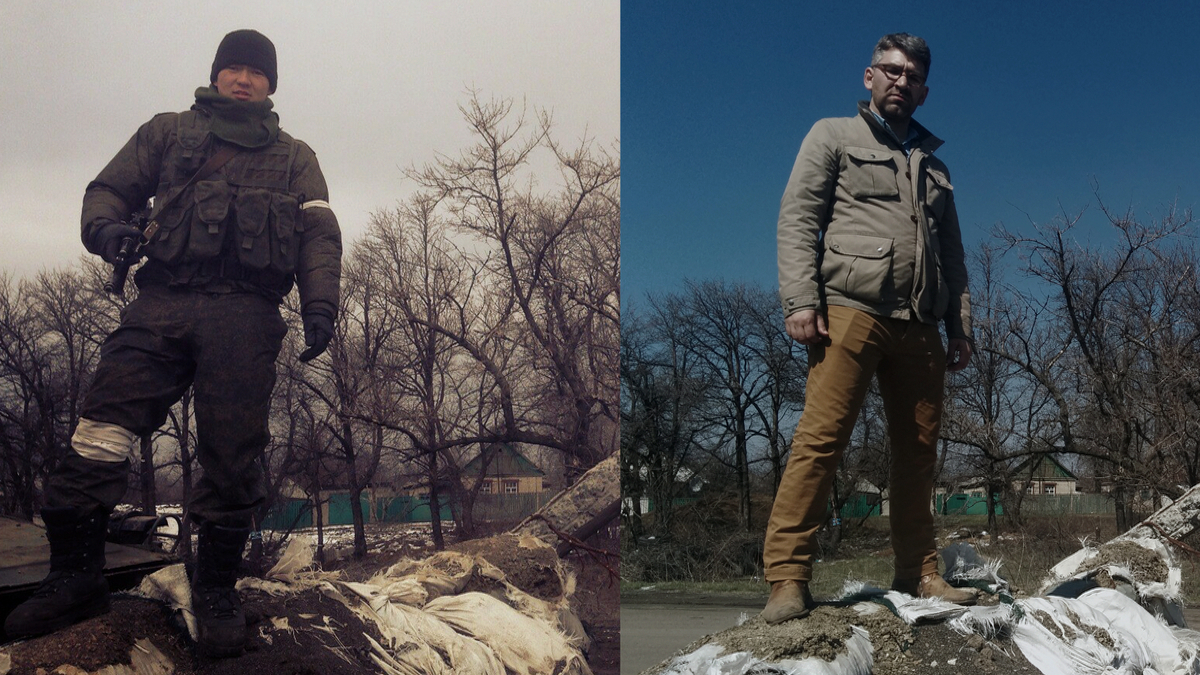 A soldier in the Russian army posed, rifle in hand, for a snapshot at a battlefield checkpoint. Simon Ostrovsky, at right, located the same spot in Vuhlehirsk, in Ukraine's Donetsk region.

Reports of the Russian military helping pro-Russian separatist fighters in Ukraine are common — but can be hard to confirm. Russia denies that its soldiers are fighting in Ukraine.

VICE News correspondent Simon Ostrovsky decided to retrace the steps of one soldier — as documented in the soldier's social media posts — to see where exactly the soldier had been, and if this might help confirm Russia's direct involvement in Ukraine.

Ostrovsky's new documentary, Selfie Soldiers, chronicles his journey in the footsteps of Bato Dambaev, who he'd confirmed was enlisted in the Russian military. He then contacted Dambaev directly.

The film follows up on recent work by the Atlantic Council, a Washington, D.C., think tank that issued a report relying on open-source information to track and verify locations where photos and videos of Russian soldiers and equipment have been taken in Ukraine.

"I wanted to find any way to be able to confirm what pretty much everybody already believes, which is that the Russian government has been directly involved in the conflict in eastern Ukraine," Ostrovsky tells NPR's Arun Rath.

"And it just happened to be that it was the Russian soldiers themselves who provided that proof inadvertently, by posting photographs of themselves online in Ukraine," he says. "And it couldn't have been simpler. So there it is."

On how he found Bato Dambaev

We were working together with the Atlantic Council and Elliott Higgins, who's a citizen journalist who's been geolocating — which is to say, finding the location of photographs — for a long time, until we found one who'd posted a photograph of himself in an area that looked like it was a battlefield and was different from all of the other photographs that he'd posted of himself.

So once we saw that there was a photograph there that looked a lot like it could have been taken in Ukraine, we started focusing on this soldier. ... We traced his entire journey from Siberia, 4,000 miles away, to eastern Ukraine.

He denied everything. I think he'd actually been prepared, as all soldiers are, that they're supposed to take off their insignia before they go into Ukraine. They're supposed to not take cellphones with them. He'd broken that rule, so he knew that he was in trouble.

I know that he reported me having contacted him immediately after I spoke with him on the phone. And this isn't in the film, but a few hours after I put the phone down, the security services came and paid me a visit in my hotel and I was essentially hounded by them out of Russia thereafter.

On Russia denying its role in Ukraine

It's a very sensitive issue, the participation of Russian soldiers in Ukraine, because everybody from Putin on down denies that it's happening. So until Russians understand, until the Russian government admits that it's taking part in the conflict, I don't think there's going to be any kind of a resolution. And I hope that this film brings us a little bit closer, at least, to that sort of an admission that it's going on. ...

One ... way I think the Russians are trying to prevent this kind of reporting is I've been applying for journalist accreditation, which I've been able to get before, for the last year, over a year. And it was a few days after I was basically pushed out of Russia that I finally got an email saying that I would be denied journalist paperwork.

An explanation was never given to me, and I think this is an extra method that the government is using to prevent reporting on its activities on Ukraine.