Accessibility links
Carnivals, Curses And Mermaids Fall Slightly Flat In 'Speculation' Erika Swyler's generous yet somewhat disappointing debut follows a young man and a mysterious book — but despite rich language and observations, it suffers from going in too many directions at once. 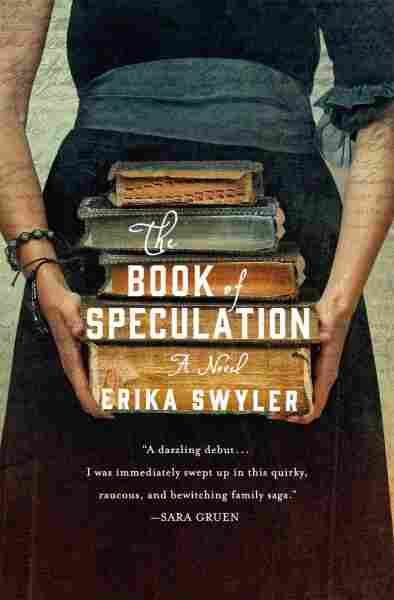 The Book of Speculation

Books about books can be tricky things, a fact that Erika Swyler slyly acknowledges in her generous yet somewhat disappointing debut novel, The Book of Speculation. In it, a young librarian named Simon Watson finds himself in the midst of numerous erosions and breakdowns: His family has all but disintegrated following the death of his parents, budget cuts are threatening his job at a Long Island library, and the house that's belonged to his family for generations is in the process of gradual collapse. Things go crazy — in good ways and bad — when Simon finds a mysterious old book delivered to his doorstep.

Instead of turning into a tedious meditation on books for books' sake or, even worse, a self-referential slog, The Book of Speculation mostly avoids the meta. Swyler has a tale to spin, and she does so with directness and wit. In the wake of Simon's strange gift, he discovers an eerie coincidence involving the death of his mother when he was seven; a presumed suicide, she walked into the ocean and drowned. As it turns out, she's not the only woman in his family who has died on that same date, July 24, by drowning. Even more curious, Simon's mother — like numerous women in his family, many of them carnival workers — had the ability to hold her breath underwater for superhuman lengths of time.

Simon's increasingly obsessive detective work becomes complicated by upheavals at work, a new romance with an old friend, and the arduous task of trying to save his seaside home from the ravages of the elements. Swyler spices things up by splicing in a parallel narrative — the history of an 18th-century carnival owned by a proto-P. T. Barnum impresario named Hermelius Peabody, and a pair of star-crossed lovers who work for him as attractions in his traveling phantasmagoria.

This back-and-forth structure takes on a deeper resonance as Simon gradually unearths the connections between Peabody's carnival and his family's tragedy. The biggest twist in Simon's quest, though, comes when his prodigal sister Enola, herself a breath-holding "mermaid" in a carnival, returns home with her unusual new boyfriend Doyle. A chain of mishaps and revelations ensues, which shakes the foundation of their family, their reality, and the house they grew up in (but don't know as well as they thought they did).

The Book of Speculation abounds with imaginative flourishes, but they don't always stick. As a first-person narrator, Simon is largely stiff and drab; many of the other major characters feel similarly flat and colorless, or else contrived in their quirky oddness. A convoluted tarot-card motif fights for air with various other underdeveloped themes of the magical and fantastic. And the book's abundant charm too often lapses into tepid domestic melodrama.

To her credit, Swyler resists the temptation to self-consciously mash together the genres of literary fiction and fantasy; instead The Book of Speculation wisely ignores genre distinctions altogether, and it's a stronger work because of that. But the book still pulls itself in too many directions at once, and despite a heavy-handed countdown that's inserted into the story, any urgency it might have had is mostly drained away. There are a lot of things The Book of Speculation does well, from its sturdy premise to its rich language to its ultimate observations about family, history, and fate. Unfortunately, being a gripping read isn't one of them.

Jason Heller is a senior writer at The A.V. Club, a Hugo Award-winning editor, and author of the novel Taft 2012.