Accessibility links
Review: 'Death And Mr. Pickwick,' By Stephen Jarvis Stephen Jarvis's debut novel explores the creation of Charles Dickens' classic serial, back when he was an unknown writer going by the name of "Boz," and the real star was illustrator Robert Seymour. 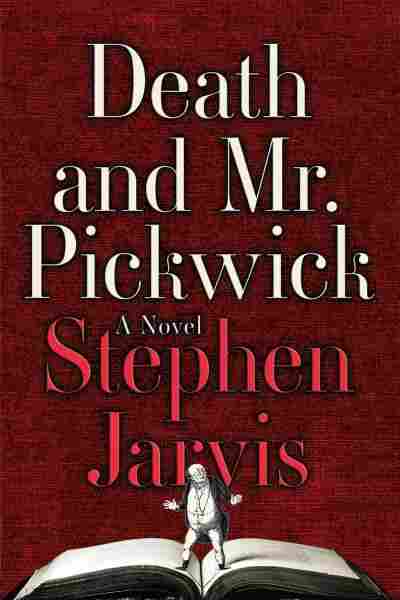 "One of my life's greatest tragedies," said George Orwell, "is to have already read Pickwick Papers. I can't go back and read it for the first time." The serialized novel of 1836 was one of the first commercial blockbusters of the English-speaking world. The author? A virtual unknown, a 24-year-old hired gun writing under the penname "Boz." The illustrator? A then well-known caricaturist, Robert Seymour, who provided a series of gently satiric etchings to illuminate the text.

Boz, of course, would rise to fame as Charles Dickens, one of the most celebrated authors of all time. Seymour blew his brains out two months into the Pickwick project, an enterprise he himself initiated. And therein lies a tale.

Stephen Jarvis's debut novel, Death and Mr. Pickwick, dramatizes the origin story of The Pickwick Papers, bringing alive Dickens and Seymour in rollicking scenes of early 19th century England. Driving the narrative are the circumstances of Seymour's creation of Pickwick, his shocking suicide and Dickens's later claim of authorship.

In Death and Mr. Pickwick Jarvis explores the creation of The Pickwick Papers, originally titled The Posthumous Papers of the Pickwick Club. The book evolved as the somewhat cracked doings of a gentlemen's club, whose members travel about the English countryside having genteel adventures and drinking way too much. There were four central characters in the original Pickwick: the poet Snodgrass, the sportsman Winkle, the ladies man Tupman and the jolly, loveable, hapless protagonist, Samuel Pickwick himself, bespectacled, with a "capacious chin," distinctly fashion-backward in his swallowtail coat, tights and gaiters.

Jarvis finds the drama behind the drama of The Pickwick Papers: The idea of the roly-poly Pickwick character, he writes, came not from Dickens but from Seymour. Without the illustrator, Jarvis argues, there would have been no Pickwick. Robert Seymour would provide the all-important etchings. What he needed was a writer. Any hack would do.

Jarvis leavens this tale with an array of characters, shaggy dog stories and toasts (these are "brandy-and-ale-soaked adventures" after all). For someone saddened that there will never be any more new novels coming from the pen of Charles Dickens, Jarvis's sprawling, 800-page work could be the next best thing.

As he appears in Death and Mr. Pickwick, Robert Seymour struck me as a compelling and tragic character. But the book really comes alive halfway through, when Jarvis brings Dickens into the story. We witness the young genius introduced to Pickwick's future publishers as "a parliamentary journalist." No one has heard of him.

Some of the most satisfying, colorful passages celebrate the original novel's explosive debut. All of London was laughing over Pickwick; lines formed at the booksellers the morning of each installment's release. There were Mr. Pickwick hats, a Penny Pickwick cigar, Pickwick plates and mugs, unauthorized musical productions. A new word, "Pickwickian," came into play, along with catchphrases like "pig's whisper" or "frog hornpipe." (Slang has certainly changed since then; it may be time to bring back an expression like "It's all gammon.") In the contemporary publishing sweepstakes, Pickwick Papers came in behind only the Bible and Shakespeare. It was as if Samuel Pickwick was actually alive and about in London, a personage more recognizable than the prime minister.

Does it matter who dreamed up the titular creature? Was this, as the author writes, "the greatest literary hoax in history?" Yes, Pickwick burst forth from Robert Seymour's fertile brain. Yes, Boz picked up the ball and ran with it. By the time he became the accomplished novelist Charles Dickens – gaining fame and riches as a result of this early venture – he insisted that the idea was his own. Dickens denied Seymour's bereft wife and children all but a pittance of the book's vast proceeds.

In my reading, Jarvis's arguments about authorship seem less important than his evocation of Dickensian (Seymourian?) England. Is Samuel Pickwick, as one of his enthusiasts claims, "the most famous character in fiction there has ever been"? Is The Pickwick Papers "the best-known book in the world ... apart from Holy Scripture"? Is it "an enchanted book?" Death and Mr. Pickwick has sent me back to The Pickwick Papers to decide for myself.