Accessibility links
What Right Do Muralists Have To The Buildings They Paint On? Musicians have their instruments, painters have their canvases, and muralists have ... walls. But when the building a mural is on is changing, the muralist has to choose to fight — or say goodbye.

It took artist Katherine Craig about a year to create her nine-story mural on 2937 E. Grand Blvd. in Detroit. Most people who drive around the city have seen it — one side of the Albert Kahn-designed building is covered in a blanket of electric blue, and a flowing waterfall of multicolored paint splatters descend from the roof line. It stands in stark contrast to the rest of the landscape of low buildings and muted Midwestern colors.

It's called "The Illuminated Mural" and it's become emblematic of Detroit's North End neighborhood.

This week, it was also on the auction block. 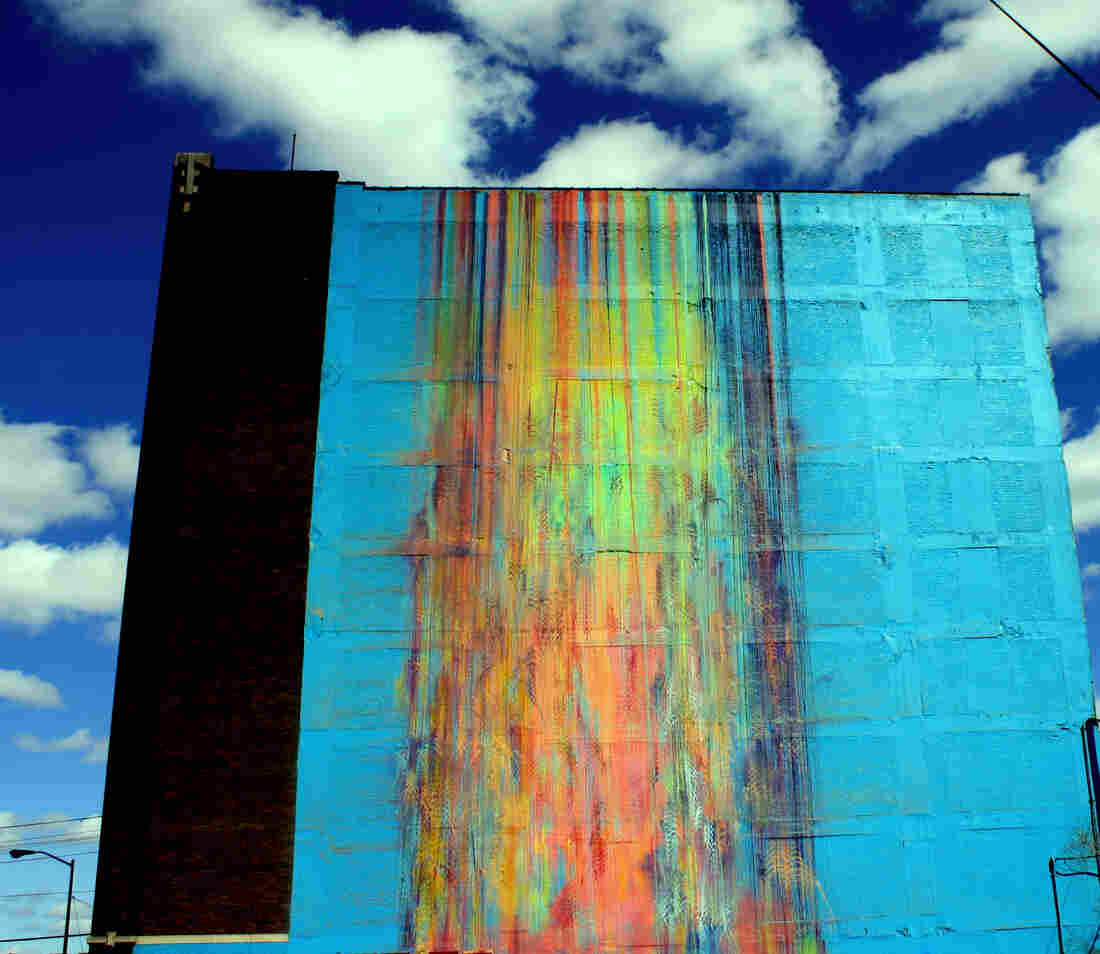 Katherine Craig painted Illuminated Mural in Detroit with the help of neighborhood children. The building it's on was auctioned this week. BB and HH/Flickr hide caption 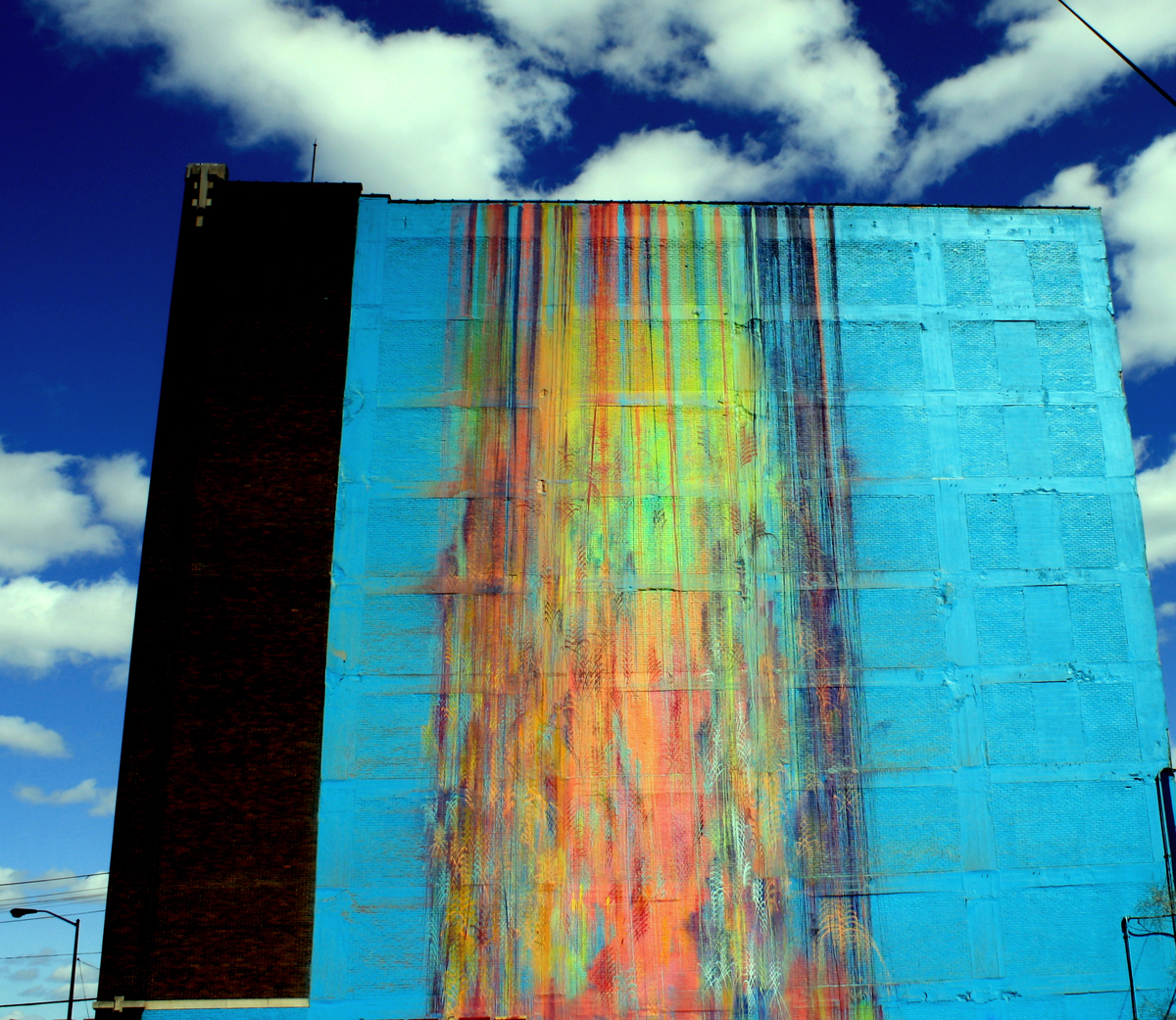 Katherine Craig painted Illuminated Mural in Detroit with the help of neighborhood children. The building it's on was auctioned this week.

Well, the building is. But what does that mean for Craig's mural? What rights does a muralist have to the wall she painted on?

That's a question that echoes throughout the country right now, as muralists try to lay claim to their artwork under the Visual Artists Rights Act of 1990.

A Massive Loss, A Huge Win

California muralist Kent Twitchell was in a hotel room in Sausalito, Calif., when he got the call — his six-story mural of Ed Ruscha in Los Angeles had been painted over. It was June 2, 2006, a date he remembers vividly because it was the day he lost his mural, and also the day of his daughter's wedding. 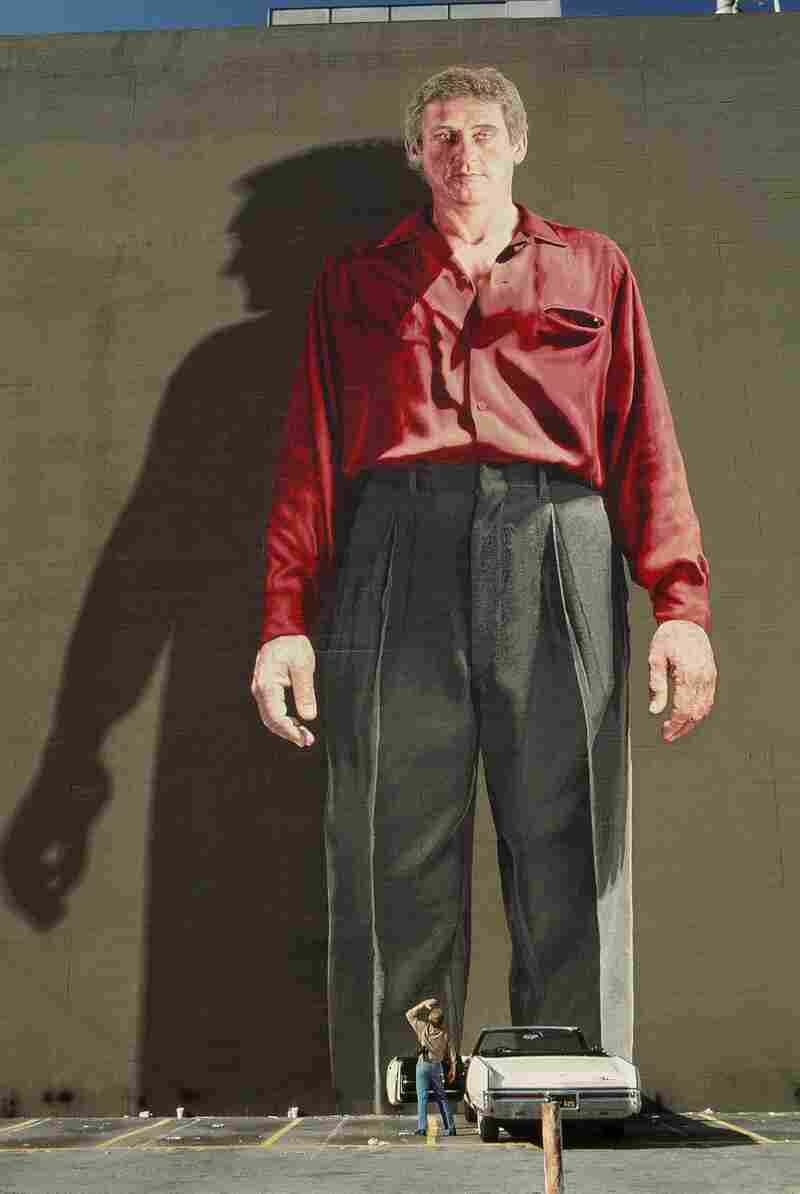 Kent Twitchell's Ed Ruscha Monument, located on the side of a building in Los Angeles, was destroyed in 2006. Melba Levick/Courtesy of Kent Twitchell hide caption 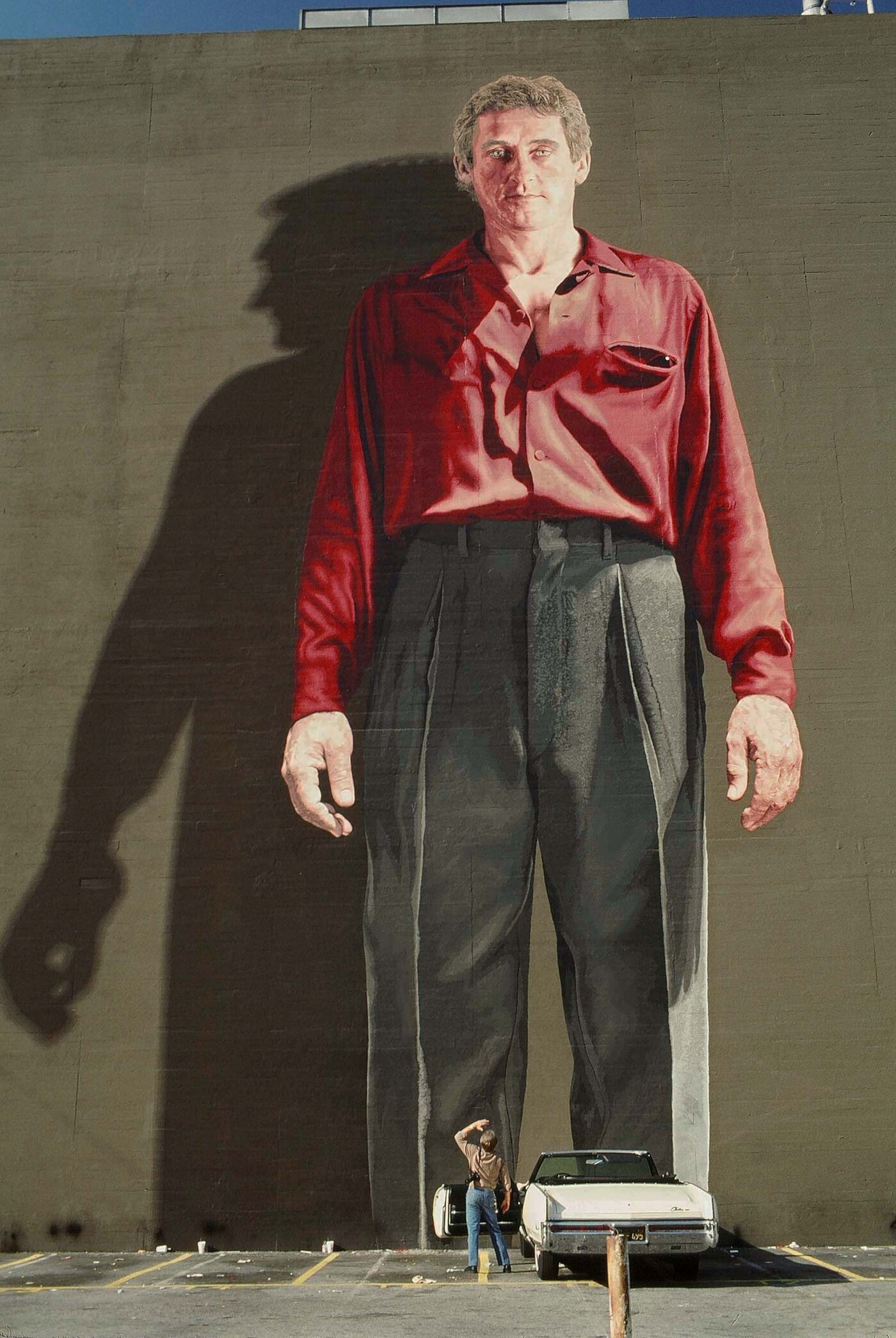 Kent Twitchell's Ed Ruscha Monument, located on the side of a building in Los Angeles, was destroyed in 2006.

Twitchell had worked on the mural over the course of nine years, and it was ruined in one day.

"It's hard to describe," he says. "It's like being kicked in the stomach, I guess. It takes the wind out of you."

So he took the case to court. He sued the U.S. government, which owned the building, and 11 other defendants for damages under the Visual Artists Rights Act, which prohibits the desecration, alteration or destruction of public art without giving the artist at least 90 days' notice.

He won $1.1 million, which is regarded as the largest win under VARA.

"If the work is destroyed, it's like part of your resume being destroyed," says Eric Bjorgum, the lawyer who won Twitchell's case, and the president of the Mural Conservancy of Los Angeles.

Many disputes surrounding murals have a lot to do with advertising, Bjorgum explains. When an area of a city is downtrodden, muralists choose highly visible walls for their works to spruce up the space. But when that area is developed, large spaces that are seen easily from the street are ideal real estate for advertisers.

Money is always a motivator — in one of Bjorgum's cases, a brewing company was paying $18,000 per month to have a beer ad on a wall, covering up a mural.

Muralist Robert Wyland knows how that goes all too well. In 27 years, he painted 100 whale-themed murals, called Whaling Walls, in cities around the world. With that many murals, it makes sense that he's run into problems. Some of the murals were painted over, relocated or destroyed.

Others were covered with gigantic, multistory advertisements.

That's what happened in his hometown of Detroit. Whale Tower, painted in 1997, is on the back side of the 34-story Broderick Tower. The Grand Circus Park area wasn't very populated when he painted the mural, Wyland explained, so when the new stadium, Comerica Park, went up next door in 2000, the wall his mural was on became a hot commodity for advertisers.

In 2006, a gigantic vinyl ad for Chrysler's Jeep Compass was put up over the mural. Verizon Wireless followed suit. Wyland was angry, but knew that even if he sued the companies under VARA, it would only be a "drop in the bucket" in comparison to the ad revenue they were getting from the space. They'd pay him off and keep his mural covered. 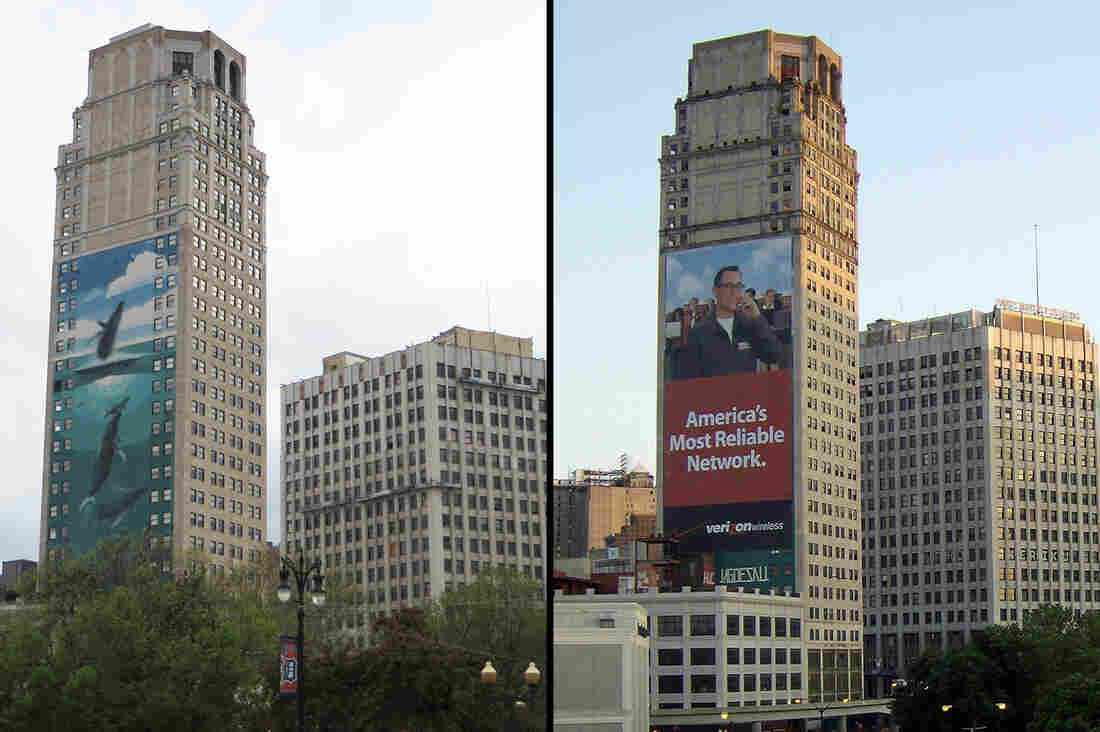 Robert Wyland's Detroit mural in 2014 (left) was covered by an advertisement in 2007. Ken Lund/Flickr and Mike Russel/Wikimedia Commons hide caption 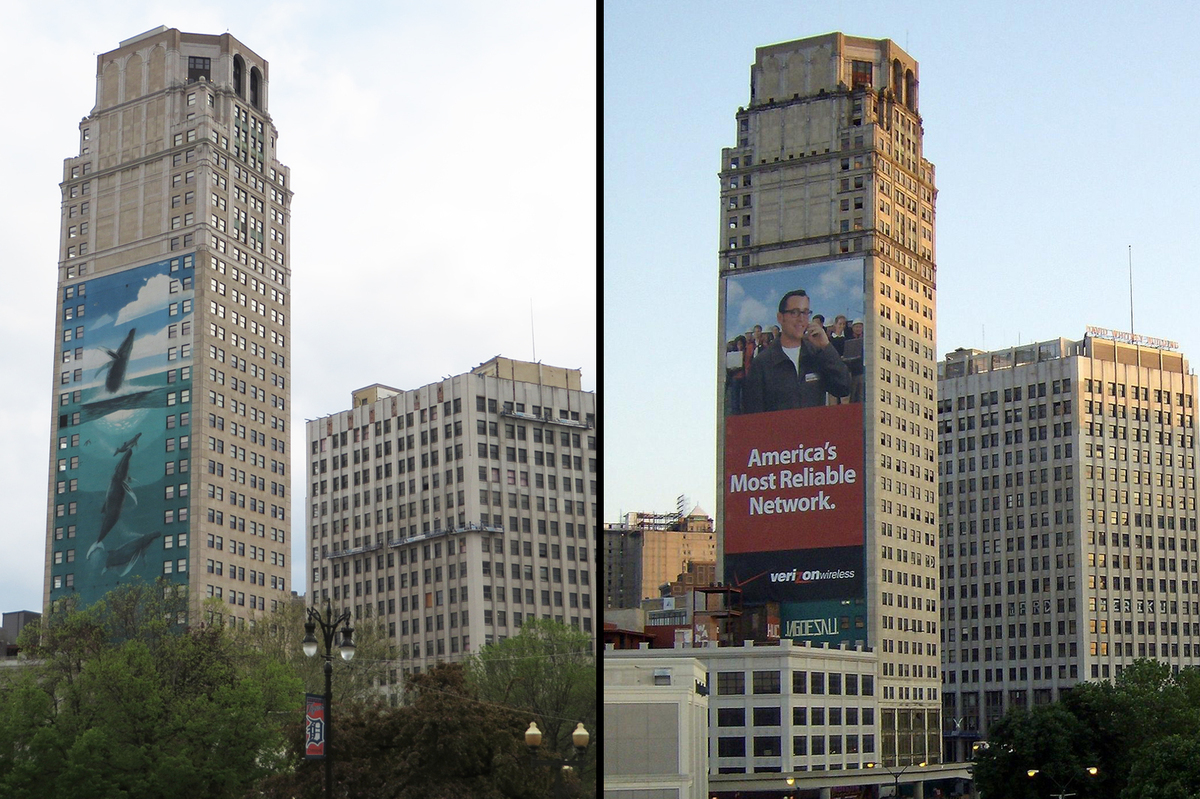 Robert Wyland's Detroit mural in 2014 (left) was covered by an advertisement in 2007.

"The art doesn't belong to the owner of the building," Wyland says. "It belongs to the community. So it's outrageous that people think they can do whatever they want with public art."

He doesn't always fight back when his works are ruined or covered up. Lawsuits under VARA mean a lot of time and money spent that mural artists like Wyland or Craig don't necessarily have.

"It's harder to save the walls than it was to paint them," Wyland says.

Finding Compromise In A Changing City

In Philadelphia, murals reign supreme. Around most corners there are huge, colorful paintings of people, places and things that serve as a walking art tour of the city's culture.

Jane Golden of the Mural Arts Program is the engine that has powered Philly to become the mural mecca it is today.

Golden started painting murals in the 1970s and worked with Kent Twitchell in Los Angeles on her first mural. She moved back to her hometown of Philadelphia because of health problems, and joined in on Mayor Wilson Goode's anti-graffiti effort in the Mural Arts Program. She reached out to graffiti writers in the city and started creating murals with them.

"People started to fall in love with the murals," Golden says. "It was like a mirror held up to them that said, 'Your life counts, you matter.' "

These murals snowballed from collaborations with taggers, to collaborations with truant kids, then entire communities. Under Golden's care, the Mural Arts Program has created nearly 4,000 works of art since 1987. She's seen the city undergo a lot of change in the past 30 years, and she has been striving to have the program change along with it.

A big part of that change is the development of lots that were vacant or empty — spaces that were once prime placement for murals are now also ideal for condominiums and parking garages. And when land is bought that could jeopardize a mural, Golden says the first step is to communicate with the developer. That's what she did when she found out that Joe Zuritsky of Parkway Corp. was going to build a high-rise directly in front of the Legacy mural. 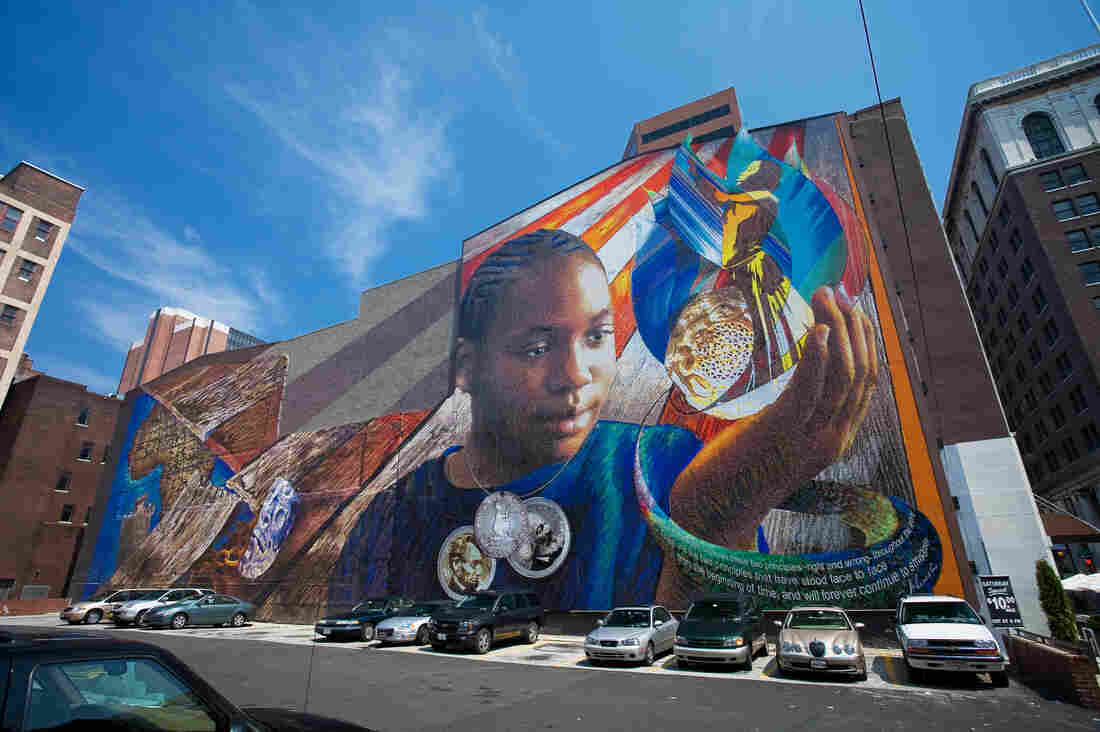 The Legacy mural will be adjusted when construction begins in the neighboring lot. The mural was done in 2006 by Josh Sarantitis and Eric Okdeh. Jack Ramsdale/Courtesy of the City of Philadelphia Mural Arts Program hide caption 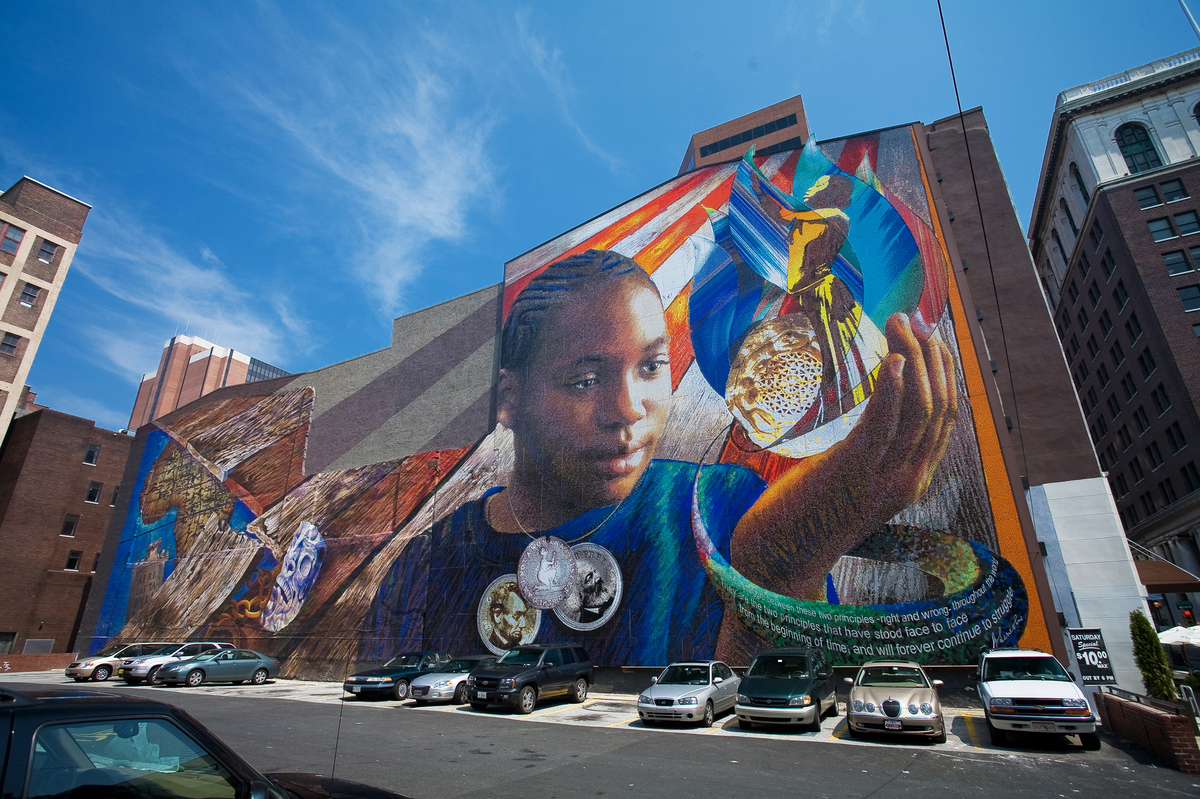 The Legacy mural will be adjusted when construction begins in the neighboring lot. The mural was done in 2006 by Josh Sarantitis and Eric Okdeh.

Jack Ramsdale/Courtesy of the City of Philadelphia Mural Arts Program

"No one would ever give a wall for a mural if they thought they could never build and cover it up," Zuritsky says. "That would be giving away the right to the real-estate with no compensation."

And that's just not good business, he says.

Zuritsky and the Mural Arts Program agreed that the Legacy mural shouldn't be completely obscured. The developer plans to install columns in front of portions of the mural, but the mural will be wrapped around the columns, so as to not disrupt the flow of the work.

When To Fight, When To Say Goodbye

But sometimes compromises can't be reached. Wyland has a Whaling Wall in Philadelphia as well, on the side of the Marketplace Design Center. The building is slated for renovation this month — a renovation that could destroy the East Coast Humpbacks painting.

Golden explains that losing murals comes with the territory of creating art in a city that is rapidly growing. Occasionally the Mural Arts Program invokes VARA, but it became clear over time that the program couldn't fight for every mural. Sometimes it had to say goodbye.

"Every time we lose something, we try to create lemonade out of the lemons," Golden says. "The memory of it should be so profound that it continually reminds us that art is important in our lives."

So what is a mural artist to do after the loss of a piece?

"I'm really enjoying this recovery, this new lease on life," Twitchell says. "To have something lost and then recovered is always a good thing."

Back in Detroit, Katherine Craig is waiting anxiously. The auction on 2937 E. Grand closed on Thursday. She hopes that the winning bidder is a fan of murals.

Otherwise, she'll be looking for a lawyer.