Accessibility links
Review: 'We Don't Need Roads,' By Caseen Gaines This oral history of the Back to the Future movies offers a wealth of fascinating historical trivia — but critic Genevieve Valentine says it's carefully broad scope can mean a lack of sharp analysis.

For This Nostalgia Trip, 'We Don't Need Roads'

For This Nostalgia Trip, 'We Don't Need Roads' 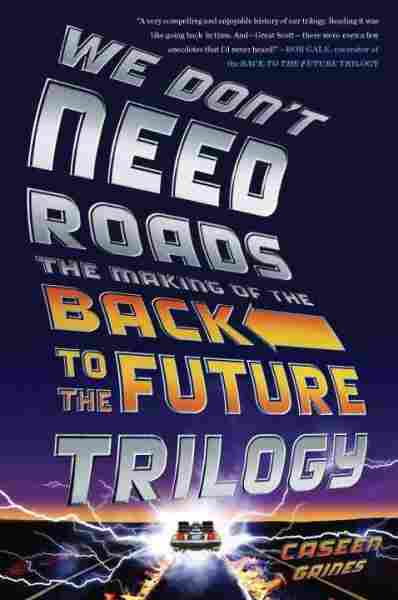 The Making of the Back to the Future Trilogy

There's no question the Back to the Future trilogy has entrenched itself in the collective pop-culture imagination for even longer than Reagan could have imagined when he adopted the movie's catchphrase about not needing roads to appeal to The Youth. It's been a video game (twice), a theme park ride three times over, and it's common knowledge even for a generation who wasn't born until after the third installment was released. (As New Year's Eve 2015 approached, Twitter and Tumblr – known for youthful users – went wild circulating photos of Griff Tannen and his hoverboard gang with captions like "Reminder: This is how we're supposed to dress starting next year.")

With that bedrock of interest, and our ever-increasing appetite for behind-the-scenes movie gossip, now seems as good a time as any for Caseen Gaines' We Don't Need Roads: The Making of the Back to the Future Trilogy. A chatty group memoir – the result of an impressively exhaustive interview process – We Don't Need Roads is an enthusiastic and thorough oral history that benefits from dozens of contributors, plus the combined authority of director Robert Zemeckis and producer Bob Gale. (It even comes with a distinctly-'80s photo insert, evoking the novelizations of yore.)

The book also runs into the expected problems of trying to synthesize 30 years of disparate memories into a cohesive unit; in its attempts to embrace all perspectives, things occasionally run aground into dry prose as Gaines deconstructs the band behind "Johnny Be Good" or the sheer number of people it took to make that iconic DeLorean.

But you see the value of that hands-off completism when things turn sticky: Almost-ran casting stories are some of Hollywood's favorite urban legends, and the Back to the Future franchise boasts not one, but two. History goes fairly easy on Eric Stolz, whose dismissal after a few weeks of shooting startled everyone and created worried buzz during production of the original movie. Given that he seems to have been fired more or less for Reason of Insufficient Goof, the scales tip favorably in everyone's trip down memory lane. Sentiment is a bit more murky when it comes to Crispin Glover's recasting (after he declined to return for the sequels), which seems to have gone poorly for everyone involved—but then again, unpicking those knots is half the fun of a book like this.

The carefully earnest scope of We Don't Need Roads means it avoids too much analysis —despite the sense that Gaines' qualified speculation occasionally hides a pointed editorial. (When speaking of Chuck Berry's reluctance to allow himself to become part of Back to the Future's musical punchline, he suggests — with the sort of shade you could sit under — "Perhaps it was a dispute over money, or maybe the rock'n'roll pioneer had a problem with the film's revisionist history, a white teenager inventing rock and black musicians just copying his lead.") Some of the book's greatest value seems to lie in the jutxaposition of what's being presented without comment, and — in an age where Hollywood's hiring practices are being investigated by the ACLU — what that lack of comment means.

Sometimes things speak for themselves: knowing Steven Spielberg is an unsurprising ace in the hole when you have to solve a problem with the studio bosses. But some of the stories Gaines relays beg for more comment — like the aside that while Lea Thompson was in her prosthetically-enhanced Lorraine getup, "Steven Spielberg came to visit, dropped his keys down her fake cleavage, and picked them back out, much to her amusement." And one — the full story of what happened to stuntwoman Cheryl Wheeler when her concerns about the hoverboard chase in Back to the Future II were dismissed — is chilling, a cautionary tale that even Gaines' just-the-facts presentation seems to hint was unavoidable, given the forward momentum of the project and the sheer number of men who didn't listen to her.

That moment is the closest the book comes to having a distinct editorial point of view about any of the major behind-the-scenes events. Unfortunately, that's not quite enough to give the book particular weight for the casual Hollywood scholar, outside of some fascinating production minutiae. This is a book concerned only with collecting the history of Back to the Future, not with where that history fits in a larger picture. But for the people who love the movies and want to know what it really felt like to be making (and remaking) some of science fiction cinema's most iconic time travel, We Don't Need Roads offers a chance to revisit that Enchantment Under the Sea dance all over again.

Read an excerpt of We Don't Need Roads