Accessibility links
It's Like It Never Happened: A 'Terminator' Dossier As Terminator: Genisys opens in theaters, we provide the necessary refresher on how exactly the franchise got to this complicated, complicated place. 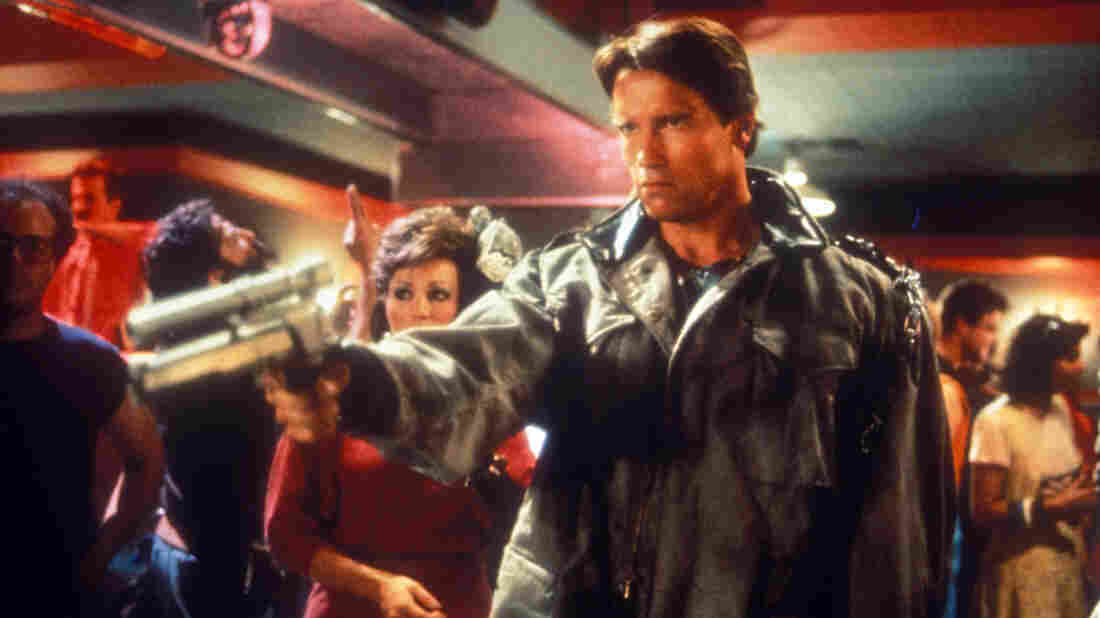 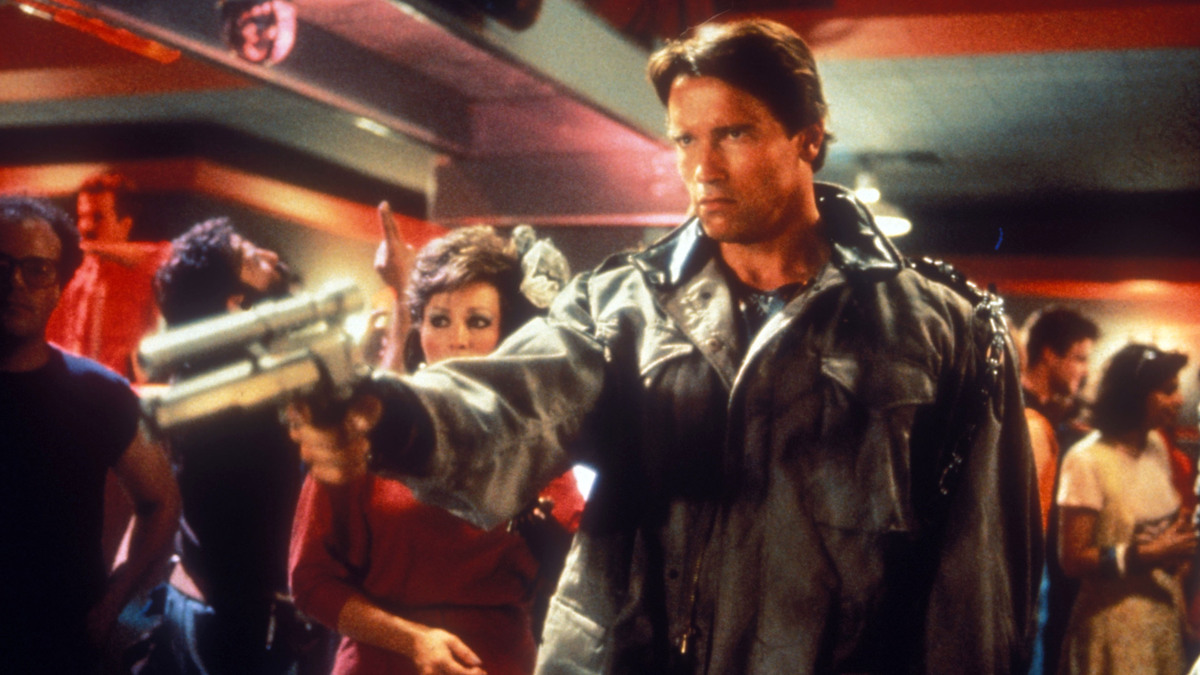 Arnold Schwarzenegger as The Terminator.

In 1984, a $6.4 million sci-fi chase flick by a skinny 29-year-old whose prior feature directing credit was a T&A horror flick called Piranha II: The Spawning became a surprise hit, launching the career of future King of the World and depths-plumbing oceanographer James Cameron. He'd sold his screenplay and his rights to The Terminator to his future ex-wife, producer Gale Anne Hurd, for $1 and the promise that he would direct the movie. That means Cameron has never seen a penny from the various 21st century efforts to extend the franchise he created after its peak, Terminator 2: Judgment Day — the biggest hit of 1991, and his exit from the story. He went on to write and direct the two highest-grossing pictures in the history of cinema, so he's probably doing okay.

The franchise, however, has become the wandering ronin of would-be blockbusters. Its features, of which this week's Terminator: Genisys [sic] is the fifth, have come from four different studios. Four different actors have appeared in the key role of John Connor, leader of the resistance against the machines that want to eradicate us. (Arnold Schwarzenegger may play a different, mass-produced robot of the same model each time, and he may be 30 years older than he was when The Terminator was made, but it turns out he's the series' one irreplaceable element.) Need more? Emilia Clarke, Genisys's new Sarah Connor, is the second Game of Thrones cast member to take on that part —Lena Headey played her on the Fox TV series Terminator: The Sarah Connor Chronicles, circa 2008-9.

That TV show treated the first two Terminators— the ones on which reasonable people can all agree, the Cameron ones — as gospel, while retconning away the events of a more recent sequel, not to mention one that was in production as the show was airing. That's the problem with time-travel stories: Everything is reversible. 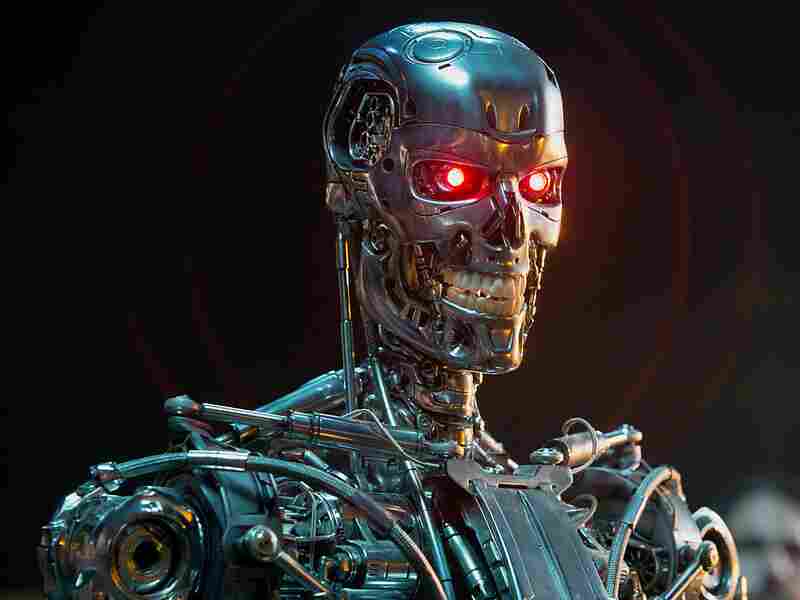 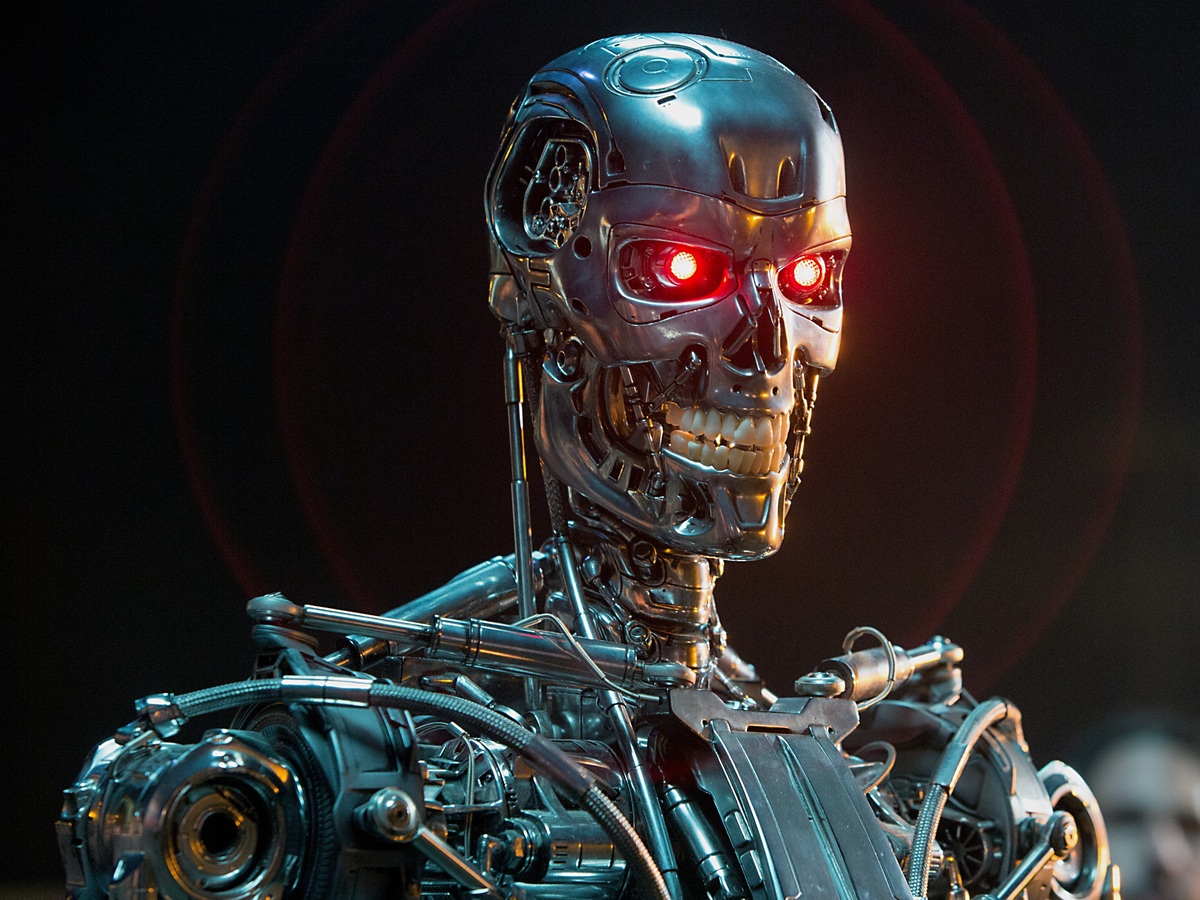 Because Genisys' wet-blanket ad campaign spoiled months ago the fact that the film — which I've not yet seen — shall redraw the whole of the Terminator mythos rather than just its less beloved later chapters, here is a handy guide to the various Terminator features (theatrical only) that no longer happened.

THE FILM: The Terminator

THE PREMISE: In the 21st century, an artificial intelligence built to run the U.S.'s military defenses tries to hunt humankind to extinction. With the meat-sacks on the verge of victory, it sends a robot disguised as a not-exactly-inconspicuous human being back in time to 1984 to assassinate Sarah Connor, a waitress destined to give birth to the resistance's greatest leader, John Connor. The puny humans send her a puny human bodyguard.

AFTER-ACTION REPORT: Everybody wins! Inspired by a fever-dream Cameron had while suffering through food poisoning contracted from the room service scraps he stole while camped out in an Italian hotel room, The Terminator walks and talks like the 1984 from which it hails, but it's a propulsive, exciting midnight movie that cleverly manages to keep most of its far-out sci-fi stuff offscreen. Blu-ray isn't especially kind to Stan Winston's makeup effects, but considering the film had about one-fifth the budget of year's biggest hit, Ghostbusters, its visual effects are good — especially Winston's 100-lb., life-size Terminator puppet, a glistening chrome skeleton with angry red eyes.

Schwarzenegger was up for the role of Reese, with O.J. Simpson (!) in the running to play the Terminator. Cameron convinced the Austrian Oak, over the objections of his agent, that he should play the robot assassin instead. After the movie came out, Cameron was promoted from screenwriter of Fox's long-brewing Alien sequel to its writer-director. 31 years later, The Terminator holds a Tomatometer rating of 100% fresh. 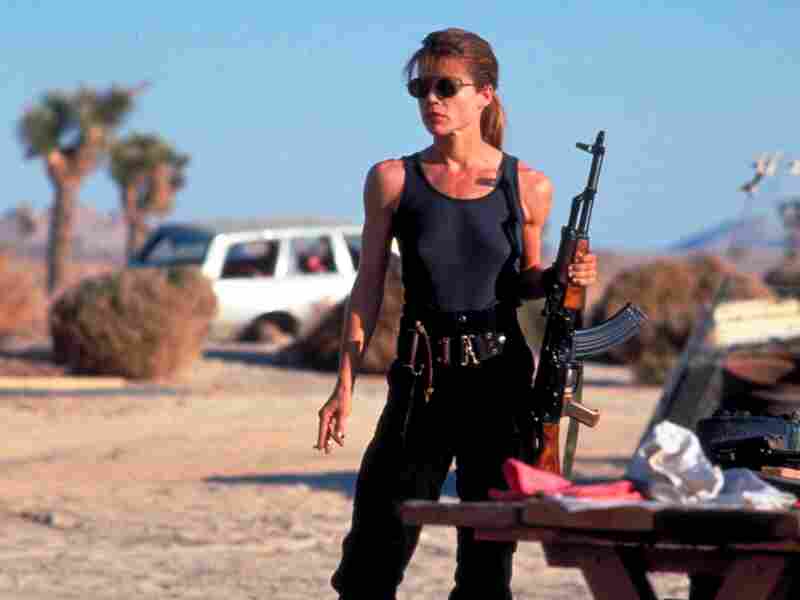 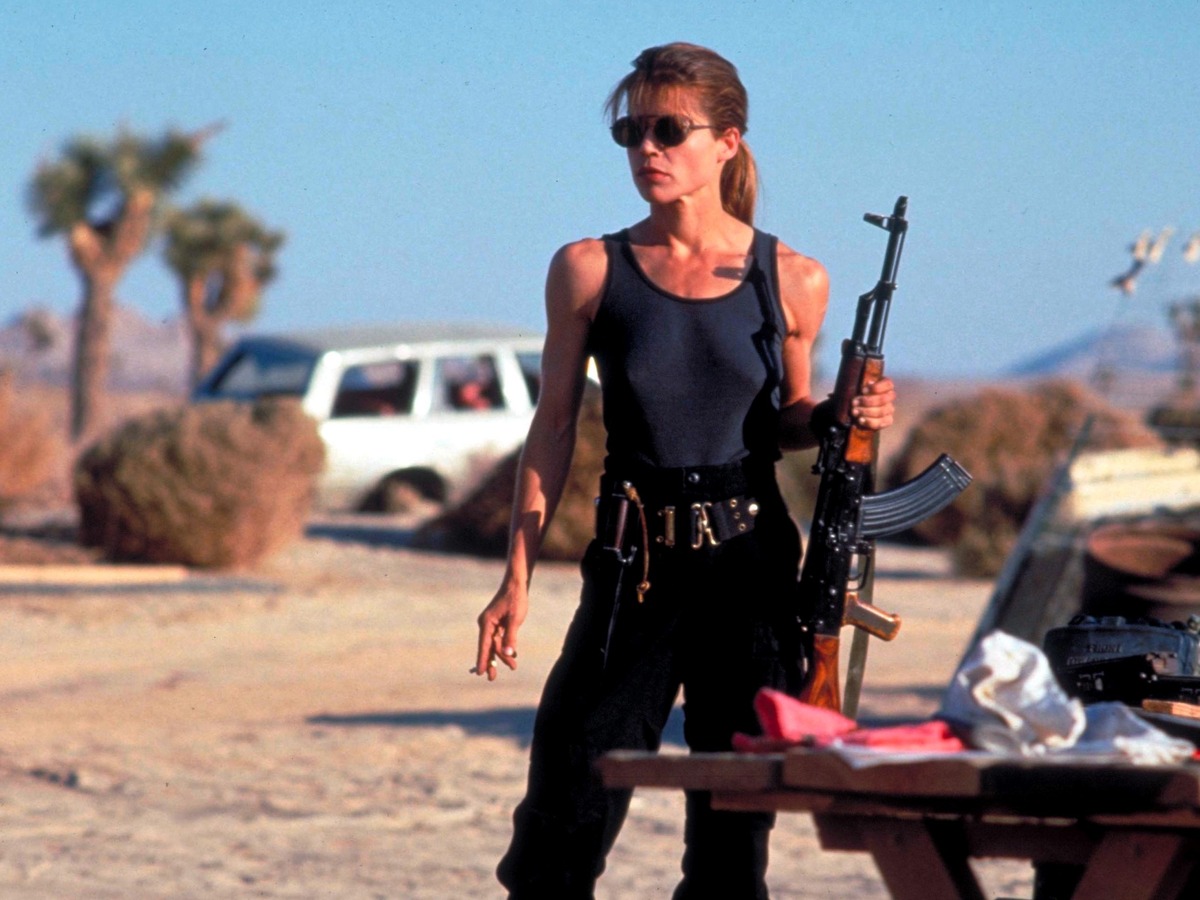 THE THREAT: The T-1000, a "mimetic polyalloy" Terminator that can briefly assume the physical appearance of any person it touches, and can also form solid-metal shapes, like swords and long hooks.

THE PROTECTOR: A T-800, Arnold-model Terminator reprogrammed to be young John Connor's bodyguard and obey his commands.

THE PREMISE: SkyNet strikes again, sending a more advanced murderbot back to the mid-'90s to clip John while he's an ATM-hacking, dirt bike-riding juvenile delinquent. He's in foster care, because his mom's attempts to warn the world about the threat of SkyNet and the coming Judgment Day — a nuclear strike that winnows the human herd by half — have landed her in an asylum. The "good" Terminator wants to keep John underground and alive, but John wants to bust out his mom and she wants to put a bullet in the brain of the decent-family-man scientist who's destined to invent SkyNet.

AFTER-ACTION REPORT: Cameron starts with ten times The Terminator's budget and inflates that by 50 percent before it's all over, but it's all onscreen, in the second perfect sequel of his career (after Aliens). To play the militarized, traumatized Sarah Connor, Linda Hamilton transformed her body into a sinewy, lethal instrument — something women in movies didn't do in 1990. Industrial Light & Magic comes through with then-revolutionary computer effects to depict the liquid metal T-1000's shape-shifting, though it's unknown actor Robert Patrick's catlike performance that really sells the character's otherworldly menace. And Schwarzenegger? It's the role he was born to play, Baby. Cameron's screenplay, written with his boyhood pal William Wisher, expands the scale and enriches the characters from the original without ever taking its eye off the narrative ball or swelling into abstraction. The movie is huge. Everybody's happy.

THE THREAT: The T-1,000,000, a giant, liquid-metal spider! Also, long lines. The film was shown only at Universal Studios Theme Parks.

THE PREMISE: The T-800 and Eddie Furlong's teenage John Connor travel forward in time to after Judgment Day and try to blow up SkyNet together. How that happens is something the 12-minute short doesn't have time or interest in covering. But Schwarzenegger, Hamilton, Patrick, and a now-much-more-grown-up-looking Eddie Furlong are all in it, and Cameron directed it, so it counts.

AFTER-ACTION REPORT: This thrill-ride was an actual ride. The 3-D presentation felt novel in the '90s and was cleverly combined with the performances of live stunt players, plus seats that shook and even dropped a short distance in time with the onscreen demolitions. Arnold cradles the chrome skull of a Terminator he's just beheaded and quips, "He was my college roommate." Definitely better than the Mummy ride.

THE FILM: Terminator 3: Rise of the Machines

THE THREAT: The T-X, an even-more-advanced shape-shifting Terminator that carries futuristic energy weapons and defaults to a female appearance. It's played by actress and model Kristanna Loken in a red-leather bodysuit, because SkyNet is only getting worse about making its "infiltration units" blend into a crowd.

THE PROTECTOR: Just another plain-old programmed-for-good T-800. "I'm an obsolete design," a 55-year-old Schwarzenegger says in the movie.

THE PREMISE: You thought our heroes had prevented SkyNet's creation in the prior movie, but "Judgment Day is inevitable," as Schwarzenegger intones. John Connor, now in his twenties, has been living off the grid, but inexplicably remained in Southern California. So when another Terminator shows up in Los Angeles trying to off him, it diverts to its secondary targets, which include Kate Brewster, his future wife. But the resistance has sent an old T-800 to protect-and-obey Brewster now. (Couldn't they at least have sent a T-1000?) Sarah Connor? Well, she has died of cancer. Did Linda Hamilton not want to be in the movie?

AFTER-ACTION REPORT: With Cameron in the middle of a long, ocean-exploring break from features after the multi-Oscar-winning, box office record-smashing Titanic, Jonathan Mostow — he of Breakdown and U-571 — steps in and delivers a serviceable tech-thriller. The script, by John Brancato and Michael Ferris, has some fun with the series' now-formulaic gearworks. But it all just feels too familiar this time around, and our heroes — Connor, now played by Nick Stahl, and his future wife, played by Claire Danes, make for a dour, boring pair. Curiously, in a time when blockbusters were suddenly being allowed to creep towards three hours, T3 comes in at a thrifty 109 minutes, which is a few too few for the story it wants to tell. But the ending is terrific — surprising and yet inevitable, as movie endings should strive to be. Coda: Four months after it opens to good-but-not-great business, Schwarzenegger is elected governor of California.

THE PROTECTOR: Sam Worthington, playing a death row inmate who signs his body over to science in 2003 and then wakes up in the year 2018 feeling nearly confused as the audience. Bale, sometimes. And Anton Yelchin's 19-year-old Kyle Reese, sometimes.

THE PREMISE: No time travel. Just John Connor — now played by Bale in high Dark Knight Dudgeon — in a war against the machines that is unfolding differently than his mother told him it would. He also has to deal with other resistance leaders who consider him a false prophet, including Michael Ironside from Top Gun and Starship Troopers.

AFTER-ACTION REPORT: At least, and at most, Terminator: Salvation tries to be different from the other films in the aging series, spending almost the entirety of its run time in the future war only glimpsed previously. Unfortunately, it also spends a lot of time with Worthington's mysterious character, who remains a cipher despite the reported best efforts of big-name (and uncredited) script-doctors Jonathan Nolan and Paul Haggis, rewriting Brancato and Ferris, who did T3. So its Bale vs. Worthington to see who can yell louder, basically. Bale seems conflicted enough to be believable as a man who can't explain why the future he's living through differs from the one moms told him was coming. Hey, who hasn't gotten some advice from a parental unit that turned out to be wrong?