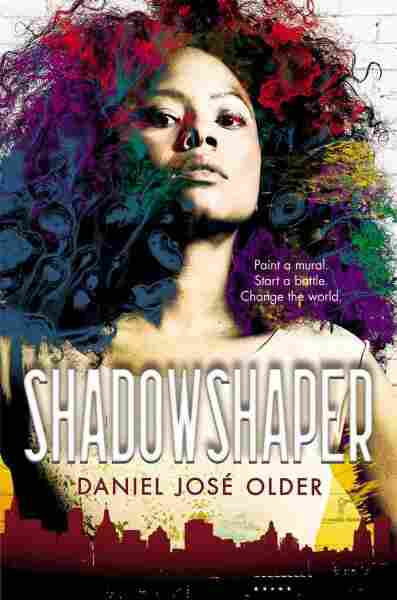 Shadowshaper had me crying at 3 percent of the e-book. Not because it was sad, but because I am one giant button when it comes to stories about family, heritage, language, art, and the magic mixed up in them, and this book knew just where to push.

Brooklyn teenager Sierra Santiago is an artist, painting her first full-size mural on an abandoned building under the approving eye of her grandfather's domino-playing friends. But something's happening to the murals in her neighborhood: One by one they're fading too quickly, some of the faces in them shifting from joy to terror, some of them shedding tears. Sierra thinks she must be imagining it — until her grandfather, bed-ridden after a stroke, gains enough lucidity to try to tell her about the sorcerors, called shadowshapers, in her lineage, and the danger threatening them. It's crucial, he says, that she finish the mural as quickly as possible.

At her grandfather's insistence, Sierra seeks out Robbie, a fellow artist, to help her — and together with a posse of Sierra's friends, they begin unravelling the mystery surrounding shadowshapers, their connection to her family, and the destructive power stalking them through the city.

What struck me throughout this book was the beautiful, nuanced, supportive and loving nature of Sierra's community. Made up of her friends, her family, her extended family's friends, her neighbors, there's tremendous joy in their every interaction: The banter, the support, the kindness threaded through merciless teasing. There's conflict too, of course, but that bedrock of love and affection is always there — and it's utterly nourishing to see such a gorgeous, diverse mix of characters from different backgrounds frankly discussing their histories and futures. Sierra's own movement through her family secrets is very effective, and the decisions she makes — of what to embrace in herself, from her nappy hair to her magical abilities — are powerfully moving.

I was also deeply moved by the revelation of who — and what — is the villain of the piece. Without giving too much away, the creeping gentrification of Sierra's neighbourhood and the person actually eliminating shadowshapers share the same narrative root: A well-meaning savior complex that, under the auspices of rescuing people, actually exploits, possesses and harms them. While the villain's revealed relatively early on, the developing facets of his threat and motivation are complex and brutal when seen for what they are, and the resolution where he's concerned reads as a far-reaching act of resistance.

If there's a flaw running through Shadowshaper, it's that the plot unfolds in fits and starts; revelations occur haphazardly, awkwardly delayed and then in a rush, in such a way that the plot — where incidents were concerned, not the overall arc — sometimes felt beside the point. Because the real story, ultimately, is in the relationships — and the places where plot necessity meets character interactions sometimes clunk or stall. But overall these snags dissolve in the warm current of vivacious voices and settings.

This is a book full of music and dancing, flavors and colors and sound. Women love and support each other, brothers rescue sisters who rescue boyfriends, and the whole is an uplifting, beautiful story with the kinds of creepy twists and turns that remind you of playing hide and seek in graveyards as a kid. It's joyful and assertive and proud, and makes me want to read everything else of Older's, for more of these voices, connections and lives.