Accessibility links
After Sketchy Science, Shark Week Promises To Turn Over A New Fin Shark Week is here, and scientists are afraid. Not of the toothy swimmers — but of inaccuracies, bad science and the demonization of animals that aren't as ferocious as Discovery Channel has made out. 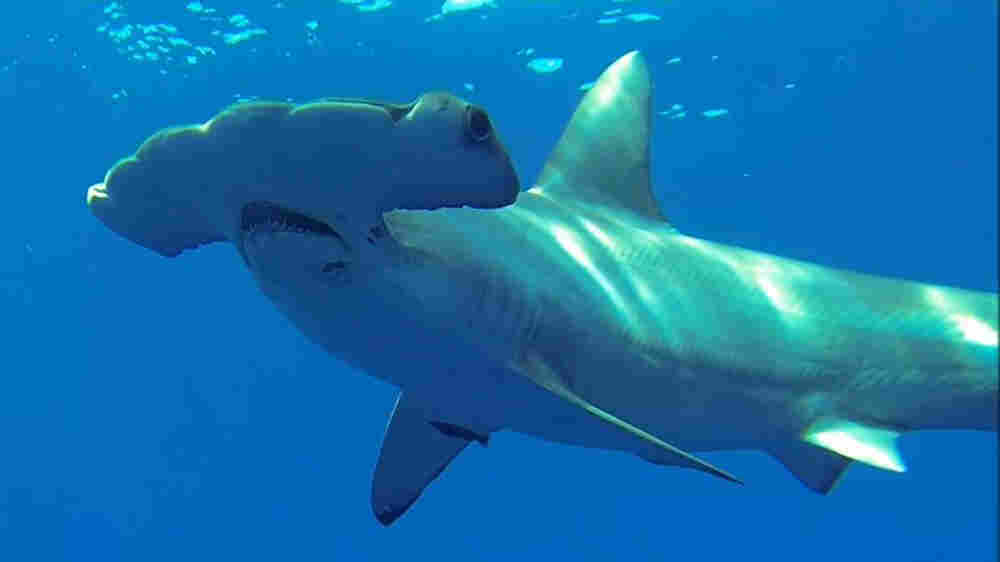 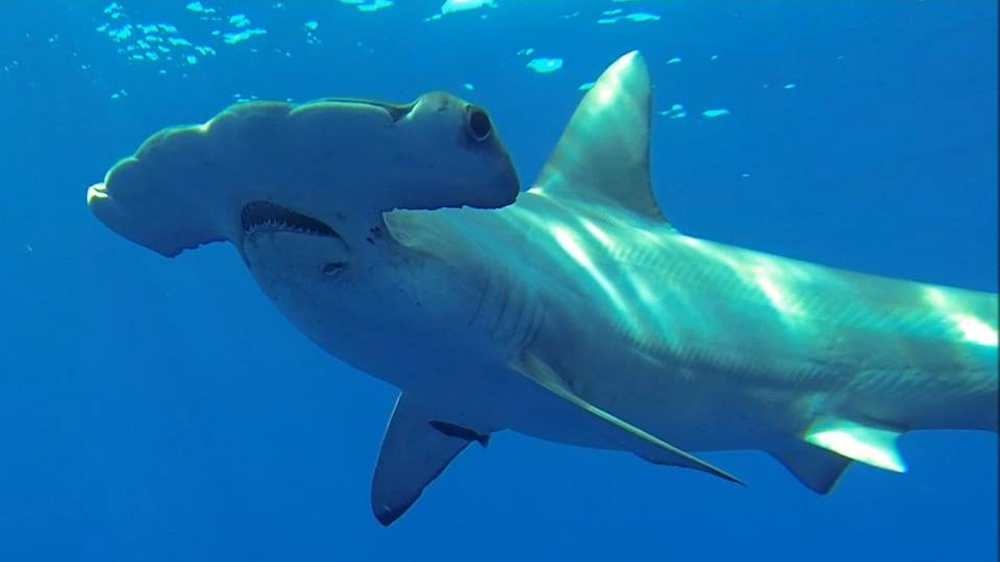 This photo from Discovery Channel shows a great hammerhead, one of the largest sharks in the world, during an episode of Shark Week.

It has been called the "Super Bowl of the ocean."

Shark Week is a ratings bonanza for the Discovery Channel with more than 40 million people tuning in last year. Shark Week kicked off this weekend with the most hours of programming ever in its 28-year history But many scientists think the huge audiences — and the hype — have come at the expense of real science.

A generation of shark scientists cut their teeth on Shark Week.

"I've always dreamed of being on Shark Week," he says. "It was my ultimate goal when I was a kid. I always watched it, and it was extremely informative when I was younger."

So imagine Davis' joy when Shark Week producers called him two years ago to make a documentary, which they said would be about his research on bull sharks in Louisiana's Lake Pontchartrain. As a graduate student at the University of New Orleans, Davis was thrilled when they paid for a day of tracking and tagging sharks.

The producers interviewed Davis about his work and at the end, he says, they casually asked if he ever heard of a legendary shark of the bayous called the Rooken.

Broken Teeth And Fake-umentaries: Another Shark Week Gone By

"And I said, 'No, of course not. That sounds like a ridiculous fisherman story,' " Davis says.

You can guess what happened next. To his horror, Davis found himself featured on a "documentary" that had little to do with his research. Voodoo Shark strongly suggested that Davis believed in the Rooken.

"There's no way I could've known they were going to portray it like that," he says.

Voodoo Shark shows Davis and his team doing real research, pulling sharks out of the water and tagging them on the deck. Davis says he did not see any unusual sharks. What was unusual was a producer's reaction when they hooked a big one.

"One of the guys was like, "Oh, maybe you should just let it bite you, that would be so exciting.' And I was just thinking to myself, 'Are you kidding me? You really think I wanna let the shark bite me just for ratings? Are you serious?' "

Ellen Prager, a marine scientist who has taught at the University of Miami and writes books for children about sharks, says she and her colleagues have a list of things that drive them crazy about Shark Week, such as the emphasis on sharks attacking people and feeding frenzies.

"That's not what you typically see in nature," Prager says. "And in fact, some of the shark researchers I know have hardly ever even seen sharks feeding in the wild."

Then there's the frenzy of factual errors. David Shiffman, who studies sharks at the University of Miami, has spent the past few years calling out Shark Week in public.

"Shark Week two years ago did not appreciate it when I recommended an 8-year-old neighbor to fact check the scripts for them," he says. "Because that 8-year-old knew more about sharks than whoever was writing those scripts did."

All these scientists agree that Shark Week hit bottom two years ago with an infamous, fictionalized "documentary" about a 100-foot, 80-ton shark they called "the serial killer of the seas."

It was presented in such a way that you could very easily watch it and not know it was fictional.

That shark, named Megalodon, also happens to be extinct — and has been for more than a million years. But Discovery resurrected Megalodon, with made-up stories of sightings and attacks. The narrator even threw in some exciting Nazi connections.

Megalodon: The Monster Shark Lives was the highest-rated program in Shark Week history. Even though the network ran a disclaimer saying it was fake, experts like Shiffman were unimpressed.

"It was presented in such a way that you could very easily watch it and not know it was fictional," he says.

But Discovery says it's turning over a new leaf — or a new fin — when it comes to Shark week, says Howard Swartz, who recently took over as head of development and production.

"This year we're focusing quite a bit on research and science, more so probably than we have in the past," Swartz says.

Under The Sea, Sex Is Slimy Business

The Discovery Channel has promised it will produce no more fake documentaries.

"We've toyed with a lot of different types of storytelling over the years," Swartz says. "And I just think now in a forward-looking direction, I think we wanna focus more on the research angle."

But how do you make anything as sexy as a 50-ton Nazi-affiliated shark? Swartz says you go to Cuba, where there are stories about a monster great white roaming the coasts.

"Allegedly, a 21-foot, 7,000-pound great white," Swartz says. "So the question was, you know was that the biggest great white ever caught? And if it was, was there something unique to these Cuban waters that these animals are growing so big or attracting animals so big?"

This year, Shark Week sent some of its shows in advance to some critics, including Shiffman. He says sharks need the Discovery Channel to not demonize them.

"When I say one out of every four species of sharks, skates and rays are threatened with extinction, there are some people that say, 'Good it should be more of them going extinct. Sharks are bad! Sharks are scary!' But they're not!"

Shiffman says sharks are beautiful and wild. He hopes this year Shark Week will make them reality stars.