Accessibility links
The Mornin' Ain't So Beautiful For This Dark 'Oklahoma!' Production In upstate New York, an experimental staging of Rodgers and Hammerstein's classic sets a key scene in total darkness and adds coldblooded murder to the plot. 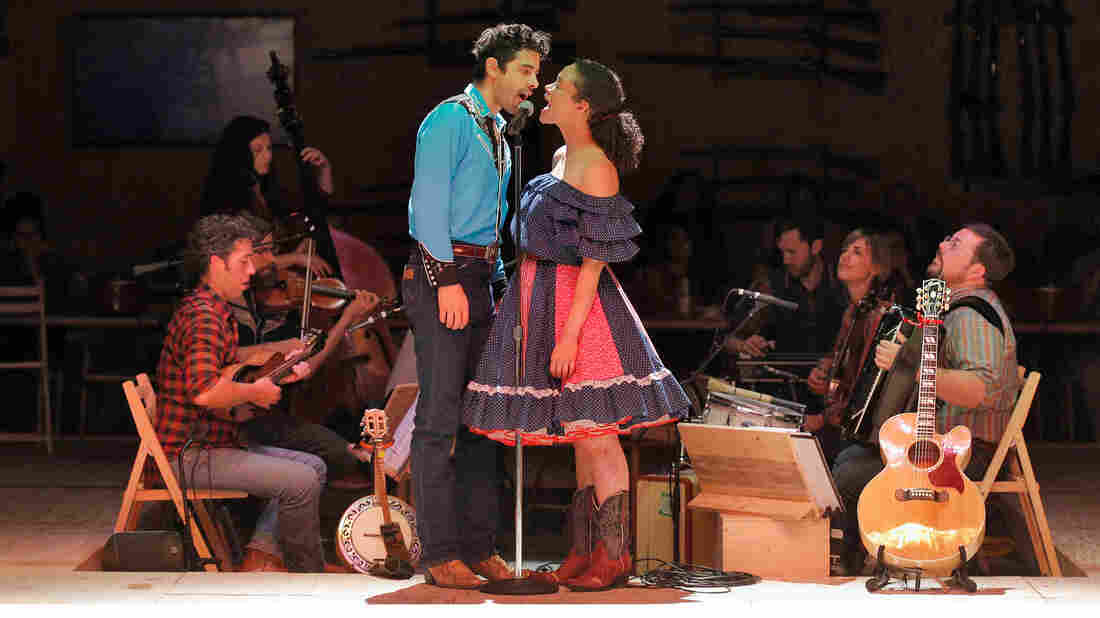 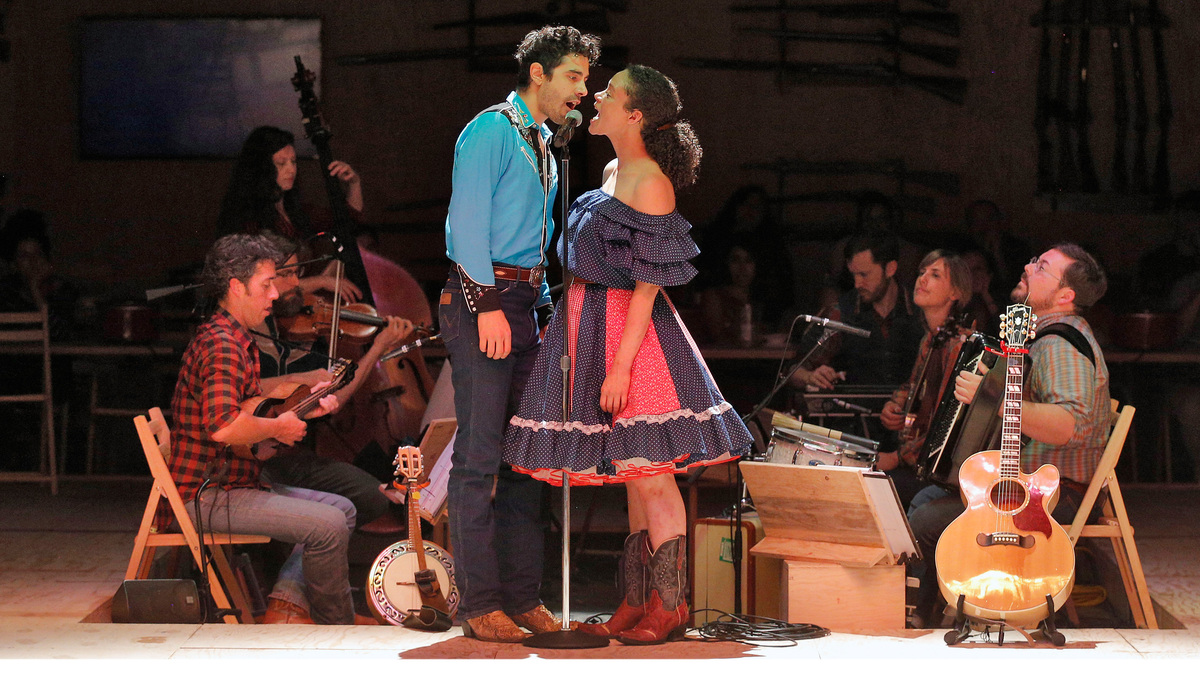 Oklahoma! was the first musical that the celebrated team of Richard Rodgers and Oscar Hammerstein II wrote together. On the surface, it tells the story of a young woman (Laurey) deciding whether to go to a party with a dangerous, lonely farmhand (Jud) or a nice, young cowboy (Curly).

But the show also has a dark undercurrent: It's set at the turn of the 20th century before Oklahoma became a state, when the territory was in social and political upheaval. Now a new, experimental production at the Bard SummerScape festival in upstate New York is asking audiences to focus on the darker story behind the musical's well-known songs.

Producer Gideon Lester explains: "There is no history of colonization or expansion or the building of nationhood that doesn't contain violence in it, and Oklahoma! dramatizes that. Now, it does it in a way that is sunny and funny and full of beautiful music. And that juxtaposition makes that violence even more disquieting."

To help the audience feel the musical's conflicting emotions, Fish puts them close to the action: They sit at long tables on all four sides of the playing space, which is made to look like a community hall. There's no chorus, and instead of a full orchestra, there's a six-piece band onstage, including a pedal steel guitar and a banjo. And the actors sometimes just speak their lines, sitting in chairs.

Some of Fish's staging ideas are also very different, says Ted Chapin, who represents the Rodgers and Hammerstein estates. "If somebody said to me, 'We're thinking of doing this, what do you think of that?' I'm not sure I would've said, 'That's a good idea,' " Chapin says. "[Fish has] made a bold choice of what is really the scariest scene in the show — the confrontation between Jud and Curly."

In Fish's production, Curly, the cowboy, confronts Jud, the farmhand, in the gloomy hovel where Jud lives. Fish says Hammerstein spends some time in his libretto describing the place. "That it's dark, that it's the source of a kind of sexuality and a kind of unknown. And so, well, how do you do that in this space? Well, sometimes the dumb answer is just the best answer: Well, what will happen if we do this in the dark?"

It's amazing how uncomfortable a bit of darkness makes people.

Damon Daunno, who plays Curly, says the scene and the way it's presented are essential to the production's exploratory aesthetic. "It's amazing how uncomfortable a bit of darkness makes people — understandably — but it really changes the sort of spine in the room. You can really feel that. And then it makes every word really specific."

The production may be most controversial at its end, where the original play's accidental death becomes a coldblooded murder. Fish says, "It makes the community culpable, and I would argue that it probably makes the audience culpable, as well."

And that, he says, gives them something to think about. "It's an old story, but it's also a story that matters now in terms of issues of community, in terms of violence, in terms of how we create outsiders and in terms of love."

While this production only runs through July 19, both commercial and nonprofit producers have been traveling to Bard to see whether this re-imagining of Oklahoma! might work in New York.