Accessibility links
Texas Bikers Arrested After Waco Shootout Say They Are Innocent Ester and Walt Weaver are among the 177 people jailed after a fight between rival motorcycle clubs in May. They say the guns they carried are legal and they weren't part of the clubs or the violence. 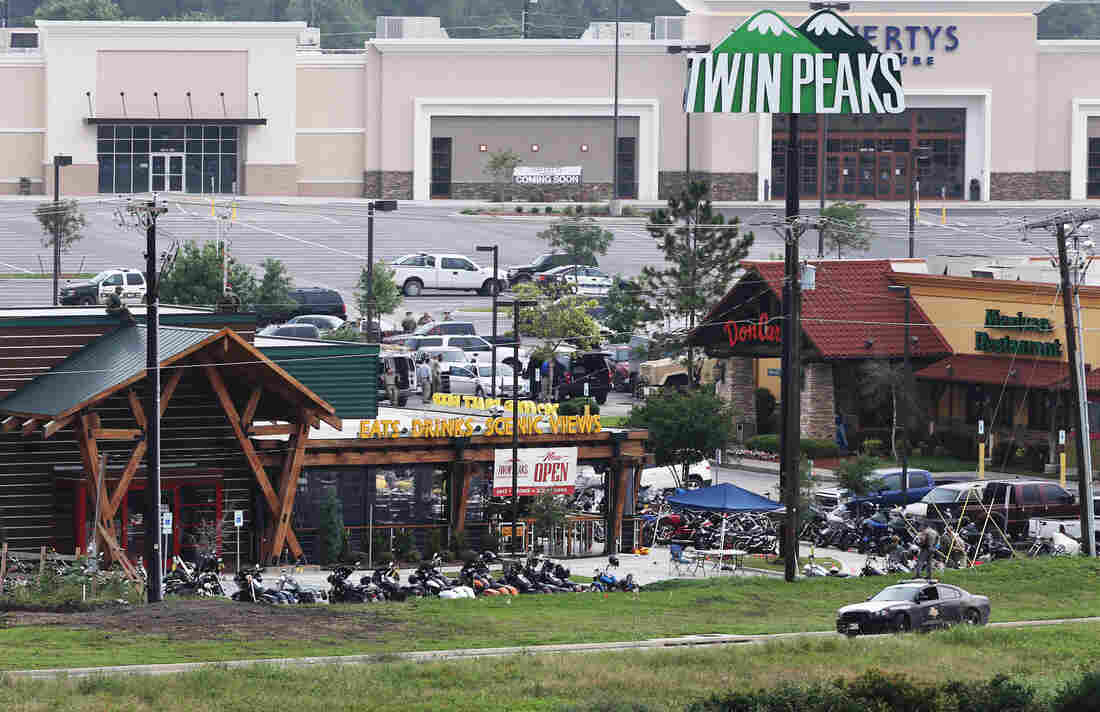 Motorcycle gang-related gunfire killed nine people at the Twin Peaks restaurant in Waco, Texas, on May 17. More than 170 people were arrested on charges of "engaging in organized criminal activity." Jerry Larson/AP hide caption 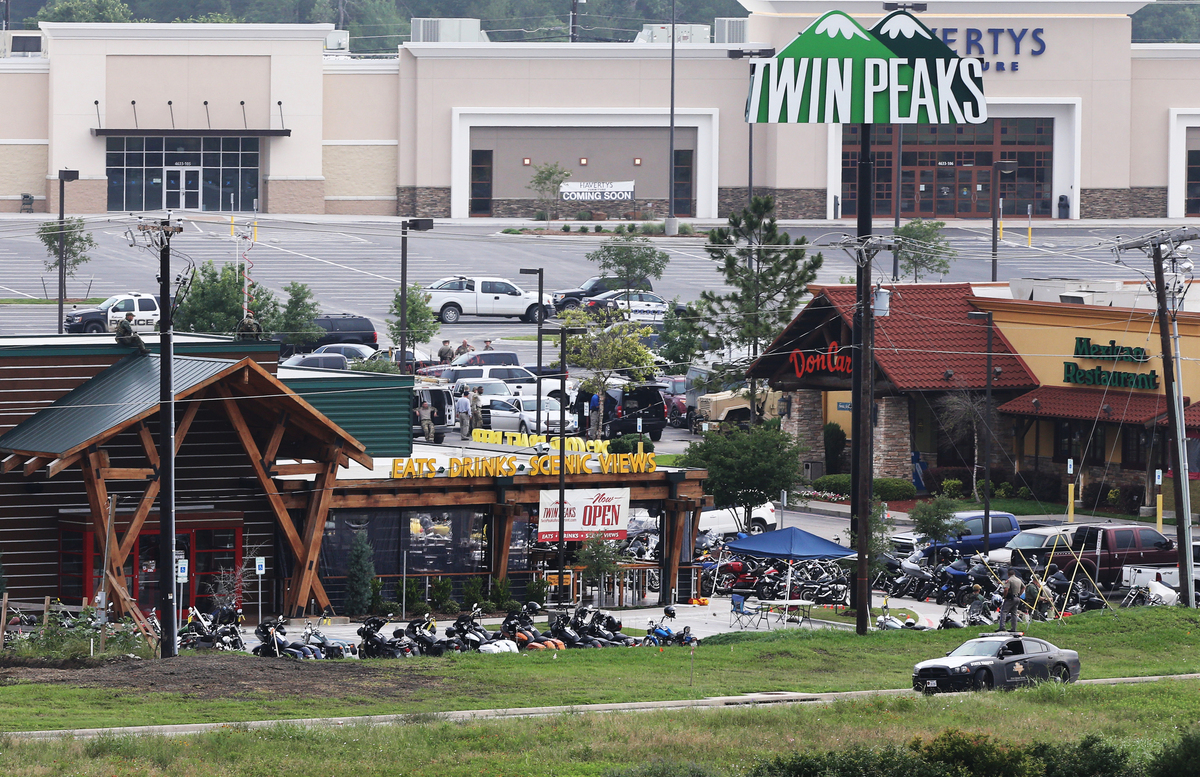 Motorcycle gang-related gunfire killed nine people at the Twin Peaks restaurant in Waco, Texas, on May 17. More than 170 people were arrested on charges of "engaging in organized criminal activity."

In May, a fight between two rival motorcycle clubs turned into a bloodbath in Waco, Texas. Nine people were shot dead, and at least 20 were injured.

In the end, 177 people were arrested and jailed on charges of engaging in organized crime.

Among them are Walt and Ester Weaver. Walt says he's stunned by the way authorities handled the situation.

"Two months ago if you'd told me this could happen to this many people in the manner in which it was done, I would've looked you in the eye and called you a liar," he says.

Walt is a veteran who still works for the Army. The 54-year-old rides a Harley and says he used to be in motorcycle clubs but isn't in one now.

Ester, 46, is a housewife. She rides a big Honda and wears a black leather vest with patches for the Queens of Sheba Motorcycle Club — a club that rides on weekends and raises money for charities.

She says ever since she was arrested, people point at her and whisper.

"I can tell by how people stare — because I guess, well, we've been in the newspaper and the Internet," Ester says. "You know it's put a bad cloud over us."

'This Is Not Downtown Baghdad'

It all started on a Sunday afternoon. Walt and Ester planned to go to a regular meeting of the Texas Confederation of Clubs & Independents — a group that lobbies for bikers' rights. 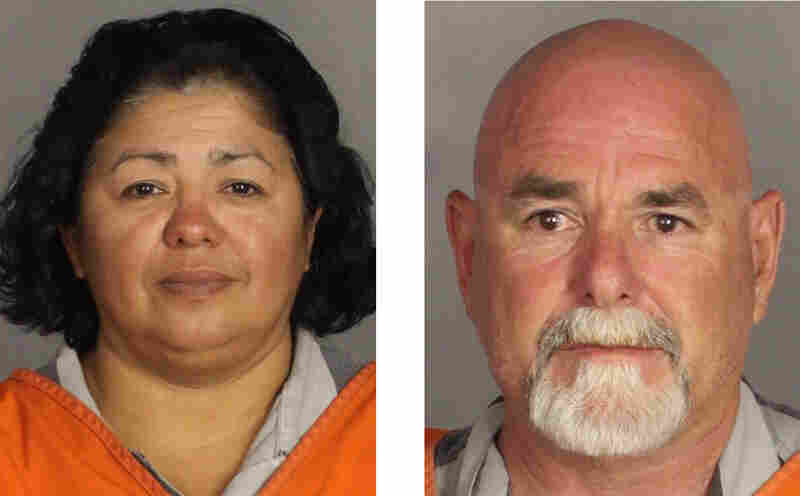 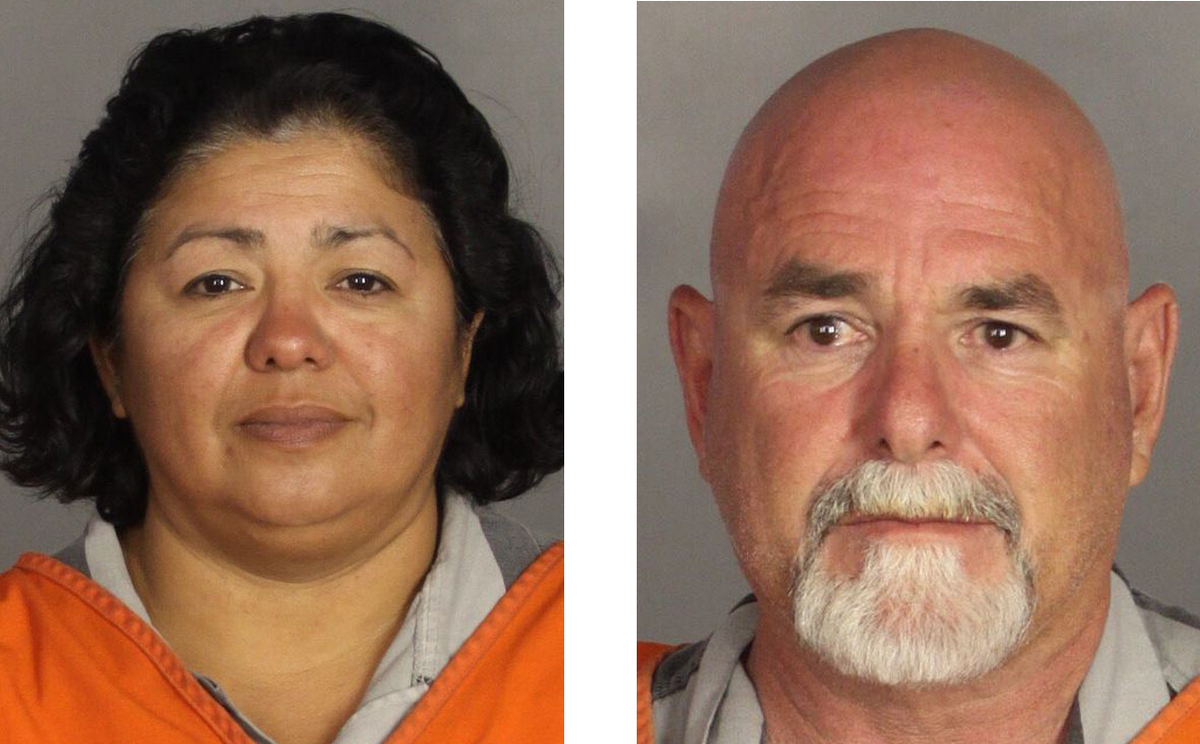 Ester Weaver (left) and Walter Weaver are shown here in booking photos taken after their arrest.

The meeting was set for 1 p.m. at a chain restaurant called Twin Peaks, which Walt and Ester say is famous for hangover burgers and underdressed waitresses.

Walt drove a few friends over in his truck. Ester rode over later on her motorcycle.

Walt says motorcycle clubs of all sorts were there that day — outlaw clubs the police say are involved in drug trafficking and prostitution, but also Christian clubs and gear heads who restore old bikes.

As people were milling about and greeting each other, Ester parked her bike, started to light a cigarette and walked toward her husband.

"I did not see where they came from. I stood there for a second," he recalls. "I'm like, just that whole second in your brain where you go, 'Are you kidding me? It's a Sunday afternoon in the middle of Waco in Texas. This is not downtown Baghdad.' "

Police say two motorcycle clubs that had been at war for months — the Cossacks and the Bandidos — had planned to negotiate some kind of truce that day, though lawyers for the Bandidos say that's not true.

Either way, police and witnesses say one Cossack was knocked down by a Bandido or a Bandido supporter in the parking lot. Guys from both sides rushed in and threw punches and then somebody started shooting. Police eventually fired shots, too.

According to the Waco Police Department, 44 shell casings have been collected from the crime scene; 12 of those casings came from Waco officers' weapons.

When the shooting began, Walt says, he bolted toward a little grassy hill at the edge of the parking lot. Ester did the same. 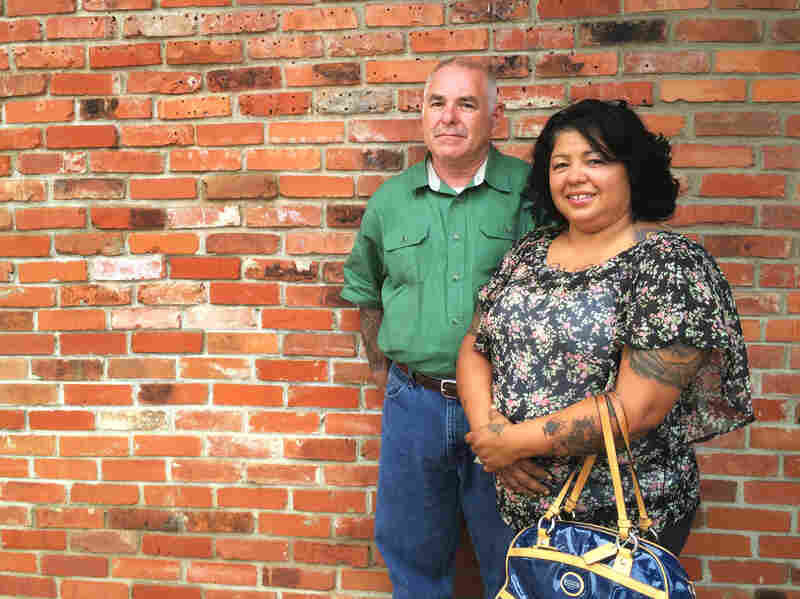 Walt and Ester Weaver (shown here outside their attorney's office in Waco) were released on bond after their arrest but are still on curfew, can't associate with other members of motorcycle clubs, and could still be indicted. Tom Dreisbach/NPR hide caption 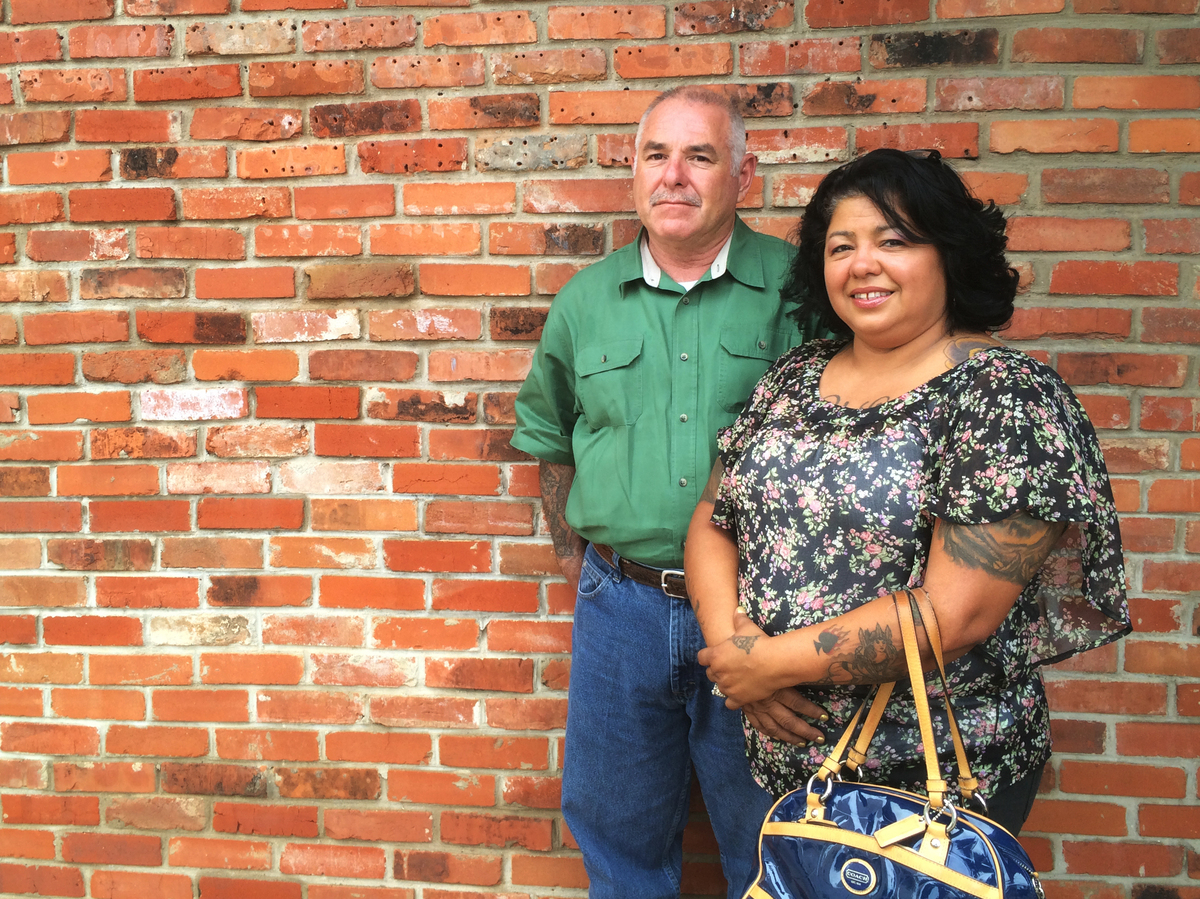 Walt and Ester Weaver (shown here outside their attorney's office in Waco) were released on bond after their arrest but are still on curfew, can't associate with other members of motorcycle clubs, and could still be indicted.

"I looked to the right and I saw Walt on the ground as well," she says. "And I was like, 'OK, we're safe. He doesn't look like he's hurt or anything.' And that was that."

Police told everybody to stay on the ground.

"If I remember right, there was one policeman, he was pointing his weapon at your back," Walt says. "The other one would come to you and ask you if you had any weapons on you. You would say either 'yes' or 'no.' "

For Walt and Ester, the answer was "yes." They both had new Smith & Wesson five-shot revolvers. They say they didn't draw their guns that day. Both have concealed-handgun licenses and carry their guns most of the time.

Eventually the two were rounded up, handcuffed with zip ties and bused with hundreds of other people to a nearby convention center.

"The assumption was that they were gonna keep us. We were gonna make witness statements. 'What did you see? What didn't you see?' " Walt says. "And then we were gonna go home."

But that didn't happen.

Walt and Ester say police did question them a little but did not read them their rights. Then, around 3 a.m., they were herded into buses again and taken to jail.

"So I remember as soon as I got off the bus and he got off the bus, I went to give him a kiss," Ester says. "And the guard pulled me and pulled him, and we're like being pulled away as we're trying to kiss each other. And we never got to kiss. And then that was it 'til I saw him again 18 days later." 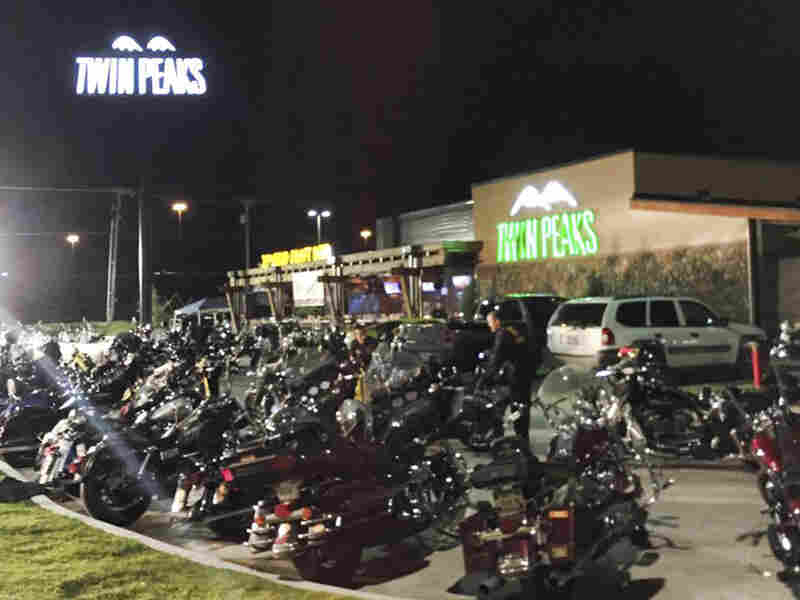 Waco police on the scene of the deadly shootout at the Twin Peaks Restaurant in Waco, Texas. The investigation into the May 17 incident continues, with assistance from the FBI and Bureau of Alcohol, Tobacco, Firearms and Explosives. Waco Police Department/Reuters/Landov hide caption 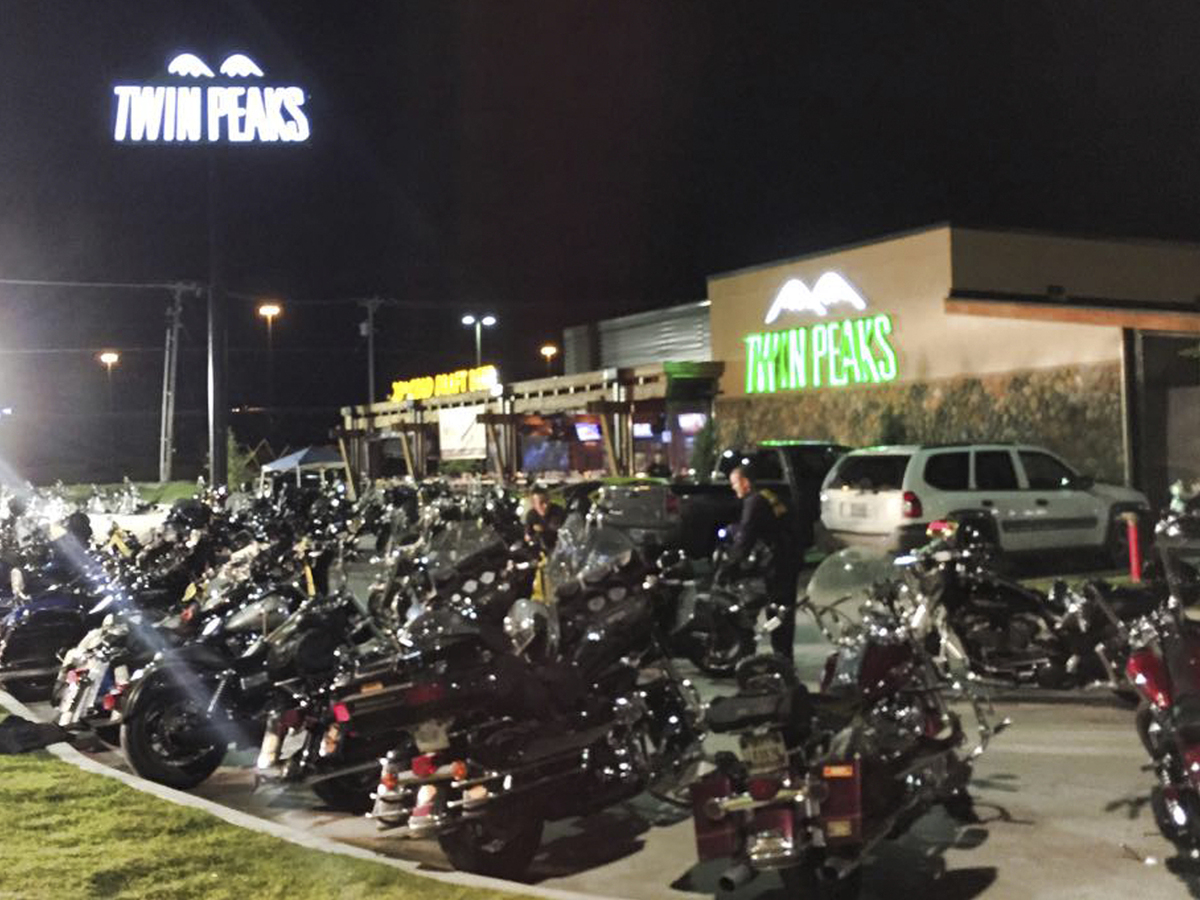 Waco police on the scene of the deadly shootout at the Twin Peaks Restaurant in Waco, Texas. The investigation into the May 17 incident continues, with assistance from the FBI and Bureau of Alcohol, Tobacco, Firearms and Explosives.

Police detained 239 people at the Twin Peaks crime scene. The majority of those people — 177 in all — were ultimately arrested.

Sgt. Patrick Swanton of the Waco Police Department says there was good reason to make all of those arrests.

"We do believe that there was probable cause to put those individuals in jail," Swanton says. "Otherwise we wouldn't have put them in jail."

Most suspects, including the Weavers, hired lawyers, got their bonds reduced, and eventually got released. According to the Waco Tribune, only four individuals arrested that day remain in jail.

But still, Walt and Ester are on a curfew, they can't associate with other members of motorcycle clubs, and they could still be indicted. Walt says he can't believe this happened in his state.

"This is Texas," Walt says. "This is a good Republican red state. They don't violate people's rights here. Take that to Chicago, New York, not here."

Frustrations Over Roundup And Arrests

The Waco Police's Swanton says the Weavers, like all of the other suspects, will be able to make their case in court.

Uneasy Rider: The Origins Of Motorcycle Gangs And How They Remain A Force

On 'Menace II Society' And 'Easy Rider': Why All The Talk On Bikers And Thugs Matters

"They will be allowed to have their say," Swanton says. "The criminal justice system is working as it should."

It's not just the Weavers who are upset. A lot of people who were arrested that day say they are innocent, that they had nothing to do with the two outlaw biker clubs that got into a fight.

And these are people who usually support the police. Walt and Ester, for instance, say that they've taken cops out to lunch.

Now, some people in Waco are starting to believe police planned the Twin Peaks incident as a way to round up bikers. Police deny this.

Walt and Ester's lawyer, Lewis Giles, says it's more likely that tempers got hot, a fight broke out, and a few people committed deadly violence.

He says the bystanders shouldn't have been arrested for simply being at a restaurant, riding motorcyles, legally carrying guns, and wearing black leather vests with club patches.

"That is literally a case of the fashion police," says Giles.

Defense lawyers are pressing police to release video from security cameras that recorded what happened in Waco that day, but police and prosecutors have opposed releasing video and other evidence pending the official investigation.

Swanton says the Bureau of Alcohol, Tobacco, Firearms and Explosives and the FBI are assisting in the case, analyzing video as well as autopsy results and ballistic reports.

"There are lots of pieces of evidence that are getting processed by other entities," says Swanton. "I think what's so important for our citizens to understand is that we're working on timelines of other people."

For now, Walt Weaver says he just wants an apology. But he says he doubts he'll get one.