Accessibility links
For This Tarantula-Killing Wasp, Dinner's A Meal Best Served Living All the recent rain in Texas is great for insects — including the terrifying tarantula hawk. It's a big, nasty wasp that doesn't just sting tarantulas ... it turns them into food for its offspring. 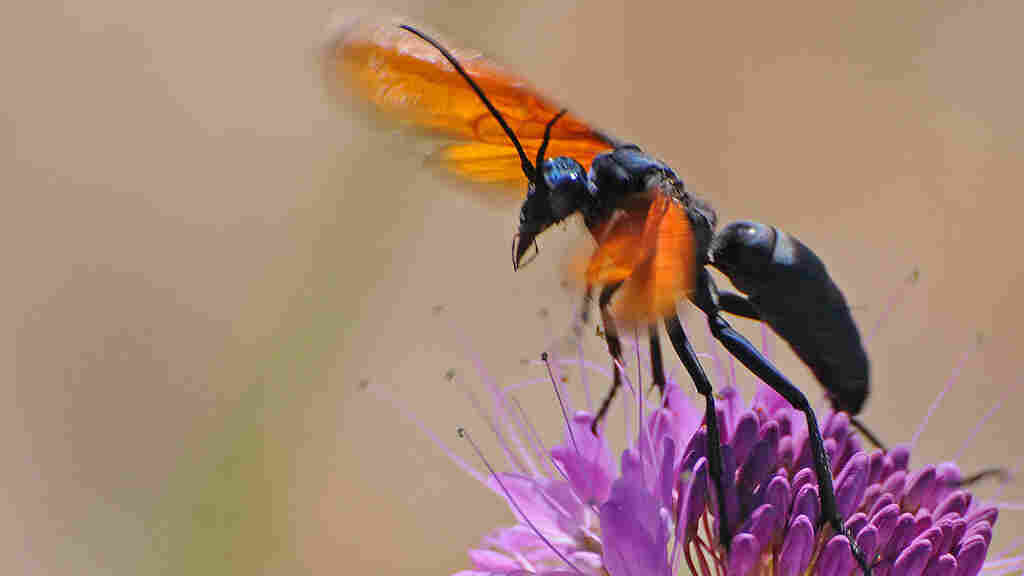 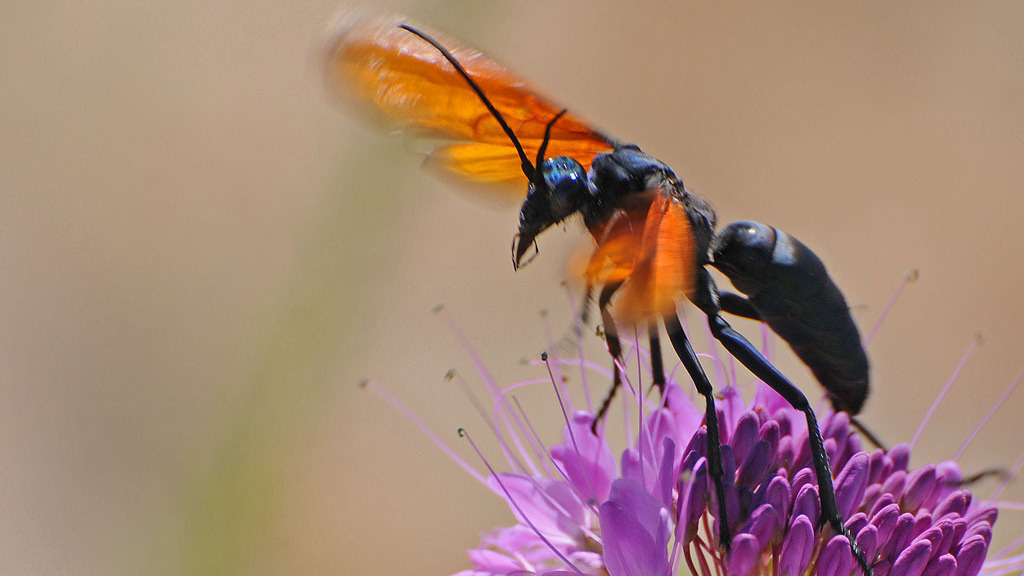 The tarantula hawk, undoubtedly eyeing its next hapless eight-legged prey.

It's been wet in Texas this year — exceptionally wet, as a matter of fact. With record amounts of rain, Texas is more than a little hot, green and rife with happy insects.

Take the tarantula hawk, for example. In case you've never heard of it, it's a wasp that's so big, and so nasty, that it attacks tarantulas — who happen to be quite big and nasty themselves.

So, what does a happy tarantula hawk look like? Ben Hutchins, an invertebrate biologist with the Texas Parks and Wildlife Department, takes NPR's Wade Goodwyn through all the gruesome wasp-on-tarantula details.

On what a tarantula hawk does to tarantulas

It's a pretty spectacular show ... we actually have several different species of tarantula hawk, and each one has its own different approach.

Some will actually flip over onto their back and crawl upside down underneath the tarantula to sting the tarantulas. Others will dart under there and grab the rear leg of the tarantula and then flip it over. 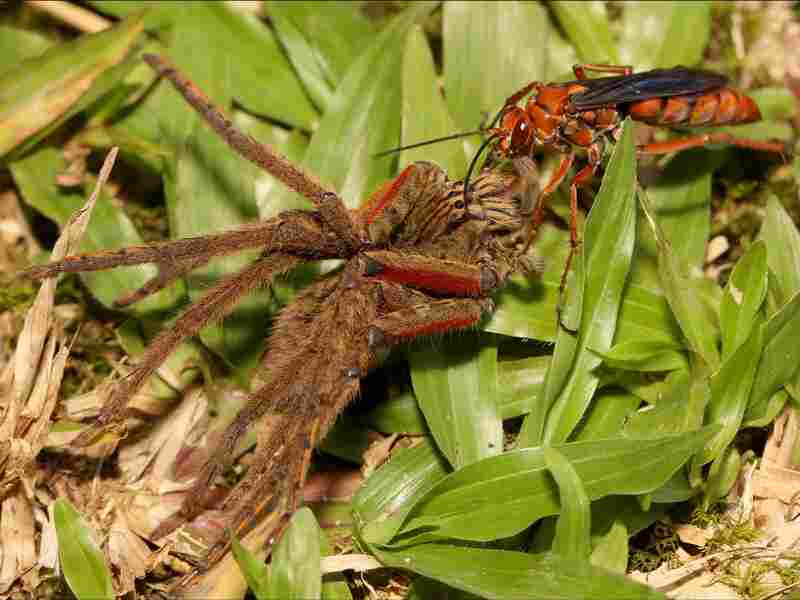 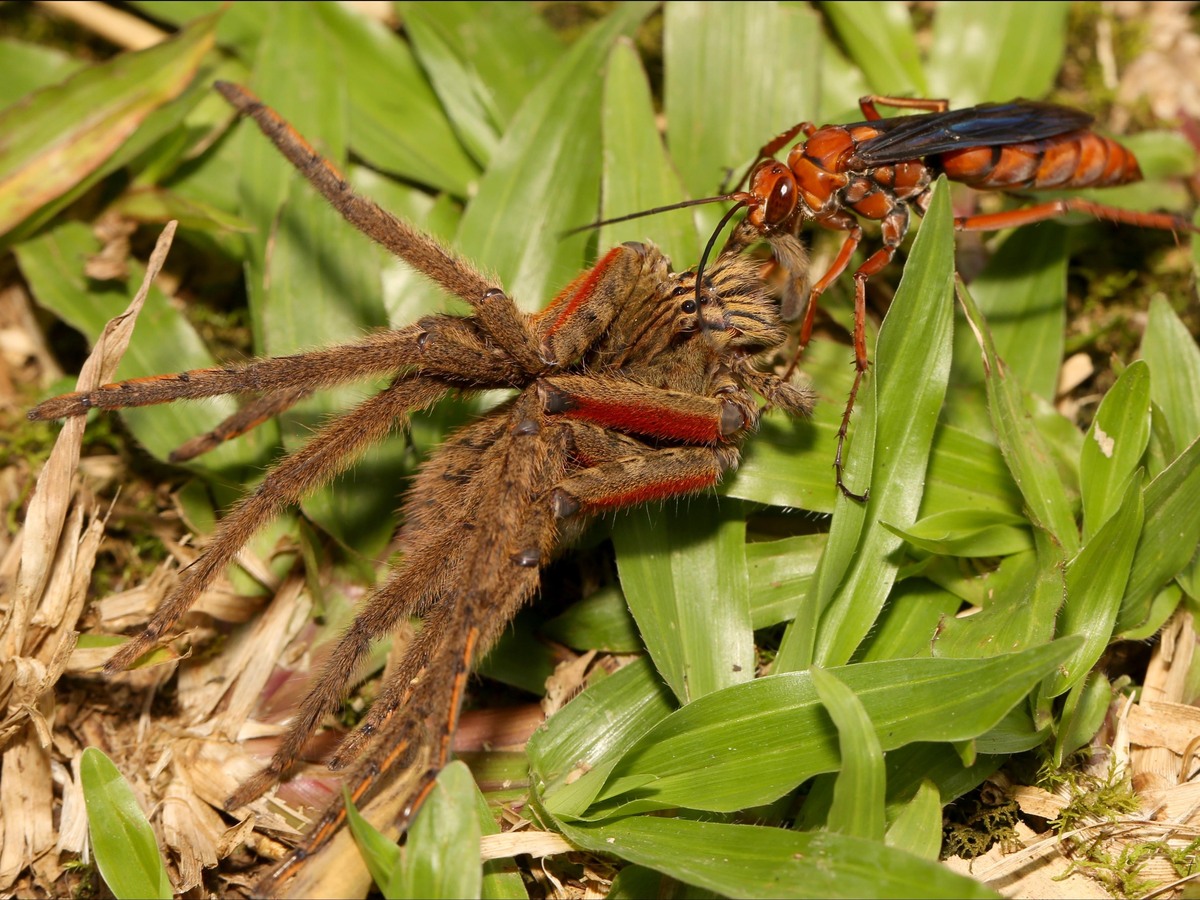 Meal time for one species probably means sleepless nights for others.

And the tarantula hawk will actually use its back legs to pin down the tarantula's fangs to keep itself from getting bit. Then it delivers that sting, usually at a chink in the armor of the tarantula — so, at joints in the legs or in the abdomen of the tarantula. And they can sting multiple times, as well, so they'll get in there and they'll make sure that that tarantula is paralyzed. ...

Paralysis sets in almost instantaneously. In a second or two, the tarantula is almost incapacitated, still alive.

In a few days, that egg will hatch, and the larvae will begin to feed on the living tarantula. ...

Interestingly enough, if the egg doesn't hatch, the tarantula can actually recover and go on its way. But more often, that larvae will hatch and eat its way into the living, but still paralyzed, tarantula. And it'll feed on that tarantula for several weeks. At least some species will selectively feed on non-vital organs first to keep the tarantula alive longer.

On what a tarantula hawk does to people

The tarantula hawk is a bit infamous, in that it has one of the more painful stings known to man. There are actually a number of sting pain indices, and in all of these indices, the tarantula hawk ranks right up top. The pain associated with this sting has been described as traumatic, debilitating, instantly excruciating. So it's bad. You don't want to step on these guys.

On seeing the wasp-tarantula struggle firsthand

Unfortunately, I've never seen this show. I can't wait, though. The day that I see a tarantula hawk come into contact with a tarantula, I'm going to sit back and enjoy this dance. But you can see the tarantula hawks. They're actually quite common and quite conspicuous on the landscape, particularly throughout the Southwest, and indeed all the way from California to Virginia.

On their interest in humans — or lack thereof