Accessibility links
'Cold Iron' Asks: What If Tolkien Had Been American? Stina Leicht's novel melds Tolkienesque fantasy with muskets and gunpowder in a tale of elves at war with humans. Critic Amal El-Mohtar calls it "an impressively character-driven doorstop."

'Cold Iron' Asks: What If Tolkien Had Been American?

'Cold Iron' Asks: What If Tolkien Had Been American? 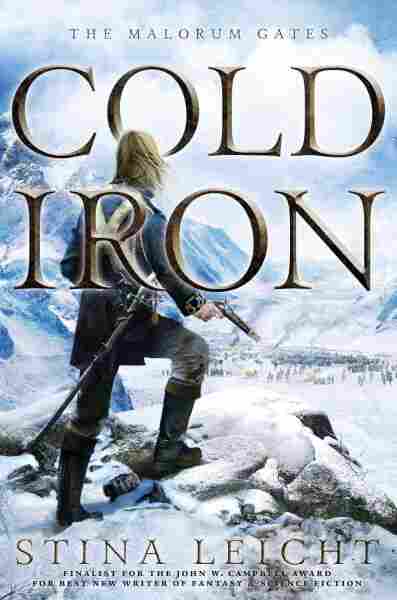 In the acknowledgements for Cold Iron, Stina Leicht writes that one of the questions at the core of her new Malorum Gates series is, "if Tolkien had been American, what would fantasy look like?" It's a fascinating question — and I don't intend to sound cynical or glib when I say that, according to Cold Iron, the answer is, at least partly, "more full of guns." Cold Iron is very attentive to the nuances of early modern warfare, on both land and sea. It explores the clash between competing technologies and philosophies as magic-wielding Kainen (elves) and musket-firing Acrasians (humans) wage war on each other.

Eledore is one Kainen kingdom among several, built on rigidly observed traditions — most especially around the handling of blood and death. Only soldiers may kill, touch weapons, bury the dead; consequently soldiers are cautiously venerated but fundamentally segregated from polite society. Nels and Suvi, twin brother and sister and heirs to the throne of Eledore, chafe against these taboos, but nevertheless respect them — until Nels stumbles into the thick of an Acrasian ambush and needs to kill in self-defense. Stripped of his position, he becomes a soldier, and the book splits into three perspectives: Nels in the army, Suvi in court intrigue, and Ilta, a young healer and commoner, moving through and between their worlds.

This is a thoroughly enjoyable book, with solid, believable characters, absorbing action, and sprawling scope. It's what I think of as '90s Epic Fantasy (mostly because of how many books like this I was devouring at the time) — fantasy that's figuring out its relationship to its own history and lineage in order to unabashedly revel in it. It reminded me, pleasurably, of Robin Hobb's Assassin's Apprentice series; I was invested in Nels, Suvi and Ilta's lives and adventures, their own perceptions of their actions and selves. I sympathized with their self-doubt and cheered on their courage.

That said, I felt that the world-building often posed more questions than it answered. The Kainen, for instance, come into their magic at different times and in different ways: Some have healing powers, some have divination magic, some have "command magic" — a form of telepathic domination deployed, among others, by generals over their soldiers, ostensibly to make them fearless in battle. But the stakes of this are very haphazardly, if not inconsistently, explored. In a book that features some wonderful discussions of sexual consent, I found it odd that Leicht seems to shy away from looking at the implications of command magic too closely. Sometimes she condemns it, sometimes it's absolutely necessary; sometimes it's a powerful weapon and sometimes completely ineffective.

In a similar vein, as much as the point-of-view characters are complex and nuanced, the villains tend towards the cartoonish. The twins' Uncle Sakari is so transparently, uncomplicatedly wicked that I just couldn't understand the other characters' tolerance of his plotting; later, Colonel Pesola seems like a carbon copy of Sakari, right down to the sexual sadism that rounds off their stock-villain clichés. But Cold Iron is doing so much work on so many other plot-mechanics levels that I can forgive it a couple of wooden bad guys to prop up the rest.

Some facets of that work: I very much appreciated the ethics Leicht establishes around killing. For instance, Nels cannot plunge a blade into someone without connecting with them telepathically, flashing through the details of the life he's just ended. That choice lays the groundwork for the Kainen society's solemn approach to killing, which is tangled up with confronting older, deeper evils that will no doubt be explored in the next couple of books. The overall shape of Cold Iron is deeply satisfying as well, pulling off the feat of ending the first book in a sequence in a way that leaves me wanting to know what happens next without resorting to wild cliff-hangers.

This is the first book of Stina Leicht's I've read, and it's an impressively character-driven doorstop with which to launch a new series. I look forward to the next.