Accessibility links
In Palestine, A Child Of Violence Becomes A Music Educator Children of the Stone tells the story of a rock-throwing Palestinian teen's journey to found a music school. NPR's Lynn Neary speaks with Ramzi Aburedwan and author Sandy Tolan. 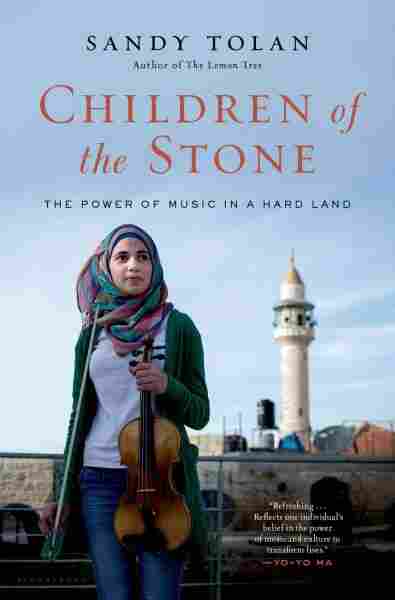 When the first Palestinian uprising began in the late 1980s, the images from the intifada showed exploding tear gas canisters launched by Israelis, answered by Palestinian youngsters shooting slingshots and hurling rocks. A photographer snapped a photo of a boy with tears in his eyes, an 8-year-old named Ramzi Aburedwan. The image came to represent the rage and frustration of life in the refugee camps. But although his face was famously stuck in time, Ramzi's life changed dramatically when he was introduced to music at age 16. He began playing viola, received a scholarship to study at a conservatory in France and became a teacher. In 2005, he started Al Kamandjâti, schools to bring music to Palestinian children.

Today, Ramzi is touring America, playing an Arabic instrument called the bouzouk, along with other Middle Eastern players from the Dal'Ouna Ensemble. Sandy Tolan, a radio producer and author, has been following Ramzi's story told in his new book, Children of the Stone. Read their conversation with NPR host Lynn Neary below, and hear the full audio in the link above.

Lynn Neary: Let's start with you, Sandy. How did you first hear about Ramzi? 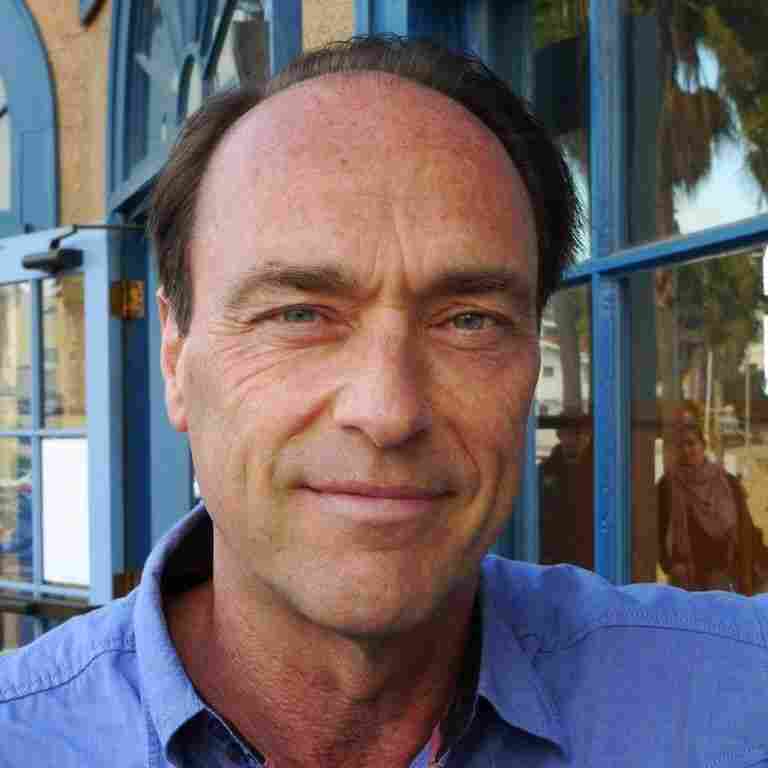 Author and journalist Sandy Tolan is also the author of The Lemon Tree: An Arab, A Jew, And The Heart Of The Middle East and Me and Hank: A Boy and His Hero, Twenty-Five Years Later. Nubar Alexanian/Bloomsbury USA hide caption 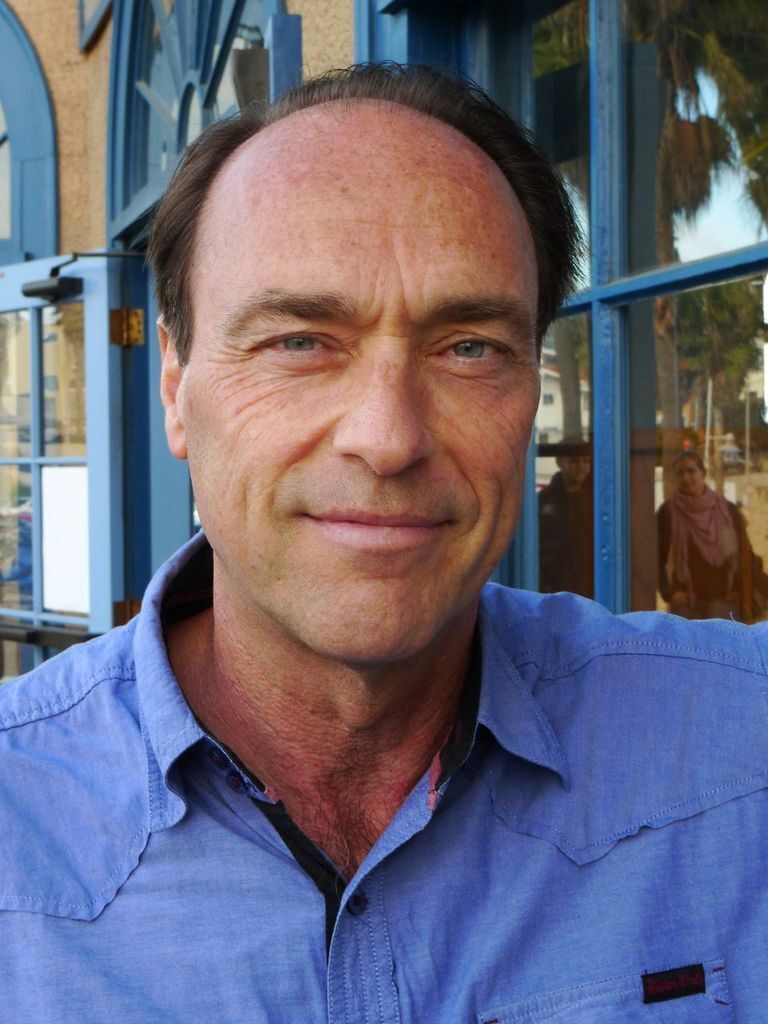 Author and journalist Sandy Tolan is also the author of The Lemon Tree: An Arab, A Jew, And The Heart Of The Middle East and Me and Hank: A Boy and His Hero, Twenty-Five Years Later.

Sandy Tolan: I saw Ramzi's image as a young 8-year-old stone-thrower in the famous iconic image on a poster for the National Conservatory of Music, but alongside that image was another of 18-year-old Ramzi playing the viola. These twin images of throwing a stone and playing the viola — same guy, 10 years apart — fascinated me so much. I just wanted to know who this guy was and what his story was. I managed to find him at the Al' Amari refugee camp, where he had been raised with his grandparents, and did a piece for NPR back in 1998, during which time he told me, "My dream is to open up music schools for the children of Palestine."

Neary: Ramzi, can you give us a sense what that was like for you, to have that introduction to music, and how it did begin to transform your own life?

Ramzi Aburedwan: Actually, when I started, I was very surprised by the sound of the instrument. When I went to the room for the first time, the teacher asked me which instrument I would like to play. I said, "I would like to play the violin." There is a bigger violin, and that was the viola. For me, I didn't know the difference, and I was very happy. The first six months when I started these lessons and workshops, actually I was still in between playing music and throwing stones — at the same time. Sometimes I had a break of 20 minutes waiting for my lessons, and I would just go down, throw stones at cars. And slowly, slowly the expressions from the music side started to be bigger and higher in myself.

Neary: There's a young girl on the cover of the book. Her name is Ala, and she's holding a violin. In a film that's been made about the school, she says that the violin has become her weapon. Tell me a little bit about her and what she means by that?

Neary: You've put on some concerts in places where you are directly challenging Israeli authorities. One was at a checkpoint — can you explain to me why you did that and how it came about?

Aburedwan: Fighting through stones in the first intifada now continues through sound, through the instrument. That was a way to say "no" to all the soldiers who were there, and also to play for all Palestinians who were waiting in big lines, just waiting to go to their houses or their work every day, and to get our message to the world that we'd love to have our freedom, and we will do it with even the most pacifist way that exists.

Neary: Sandy, you said that that's a very joyless place, that checkpoint, but that that day they brought joy to the checkpoint. Tell me what it was like.

'The Lemon Tree' Tells Mideast History Via Friendship May 15, 2006

Tolan: This is a massive checkpoint, full of steel barriers and 25-foot-high walls and gun turrets. It's basically a barrier between Ramallah and Jerusalem, Jerusalem being the hoped-for capital of the Palestinians. So, people who have these precious permits that they were able to get were crossing the checkpoint to go to Jerusalem. Suddenly, Ramzi and the Al Kamandjâti musicians pull up in this bus, right at the edge of the checkpoint, and all of a sudden you see them marching out right to the checkpoint itself, right on the other side of these steel bars where the soldiers were. They set up their music stands, and let me tell you — I've been a journalist for 30-some years — I don't remember a more amazing experience. To see this space transformed and to see the joy on the faces of these kids — they were going back in jubilation at the end of the concert. At the time Ala was 13. I said, "Ala, how do you feel?" She goes, "This was the best concert of my life."

Neary: The news out of the Middle East, forever and a day it seems, has been nothing but bad, and the situation seems so intractable, and it's very hard to see that it's ever going to get better. So you really want to believe your message that music can transform people's lives or perhaps transform a political situation. But do you really believe that?

Aburedwan: I have no choice to not believe. I believe that through this message, you see that we are alive and we are seeking our freedom. Through music, all these young [people] and all these people in Palestine are trying to fight in the best ways that they see, and the more beautiful unique ways, just to tell everybody that we are there and we are alive. We would like just to raise our kids in a free Palestine and in a peaceful and normal situation, like how kids grow everywhere in the world.

Tolan: Just to add to that, I think that music cannot in and of itself change a political structure. But what I've seen it do with the kids of Al Kamandjâti, it makes them agents of their own sense of self-worth, and it makes them agents toward their own freedom and sends an example out that we are here, we are human too and deserve the rights that children all over the world also have.

Read an excerpt of Children of the Stone