Accessibility links
She Was Groot: After A Galactic Hit, Marvel Screenwriter Tackles Comics Nicole Perlman was the first woman to get a writing credit on a Marvel Studios movie, last year's Guardians of the Galaxy. Now, she's taking on a more earthly challenge: Writing her first comic book. 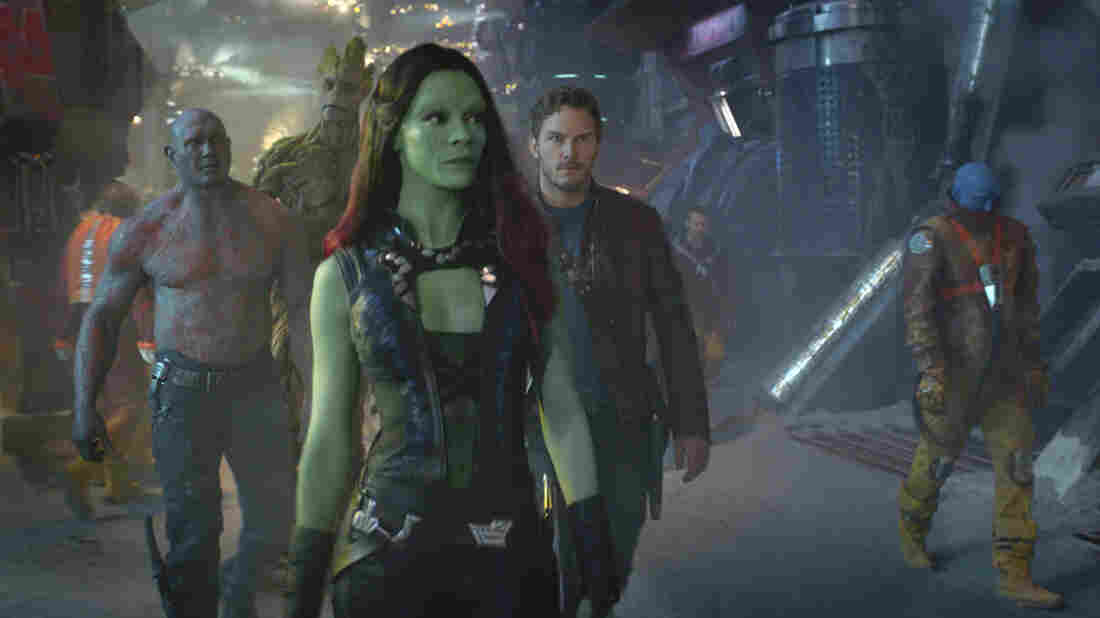 One of screenwriter Nicole Perlman's next projects is a comic based on Gamora, the green-skinned killer played by Zoe Saldana in 2014's Guardians of the Galaxy. Marvel Studios hide caption 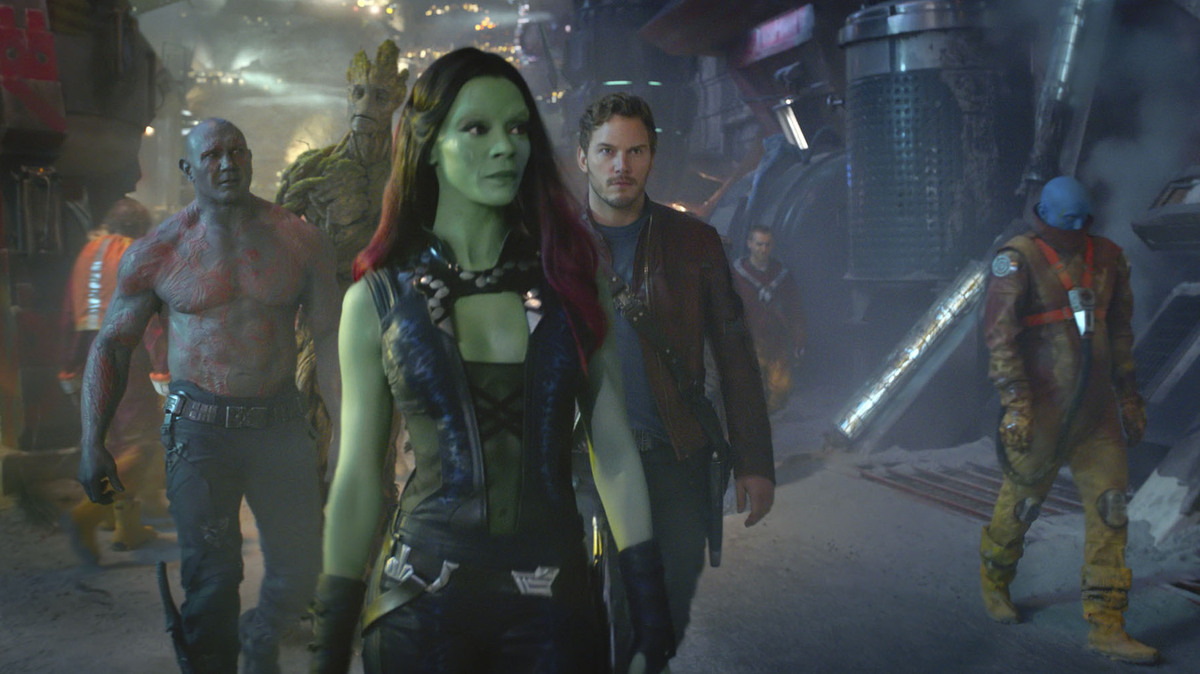 One of screenwriter Nicole Perlman's next projects is a comic based on Gamora, the green-skinned killer played by Zoe Saldana in 2014's Guardians of the Galaxy.

Nicole Perlman was the first woman to get a screenwriting credit on a Marvel Studios movie, for last year's big hit Guardians of the Galaxy.

Perlman has been tapped to write the upcoming Captain Marvel movie, too, but first she's navigating a slightly less galactic challenge: Writing her first comic book. 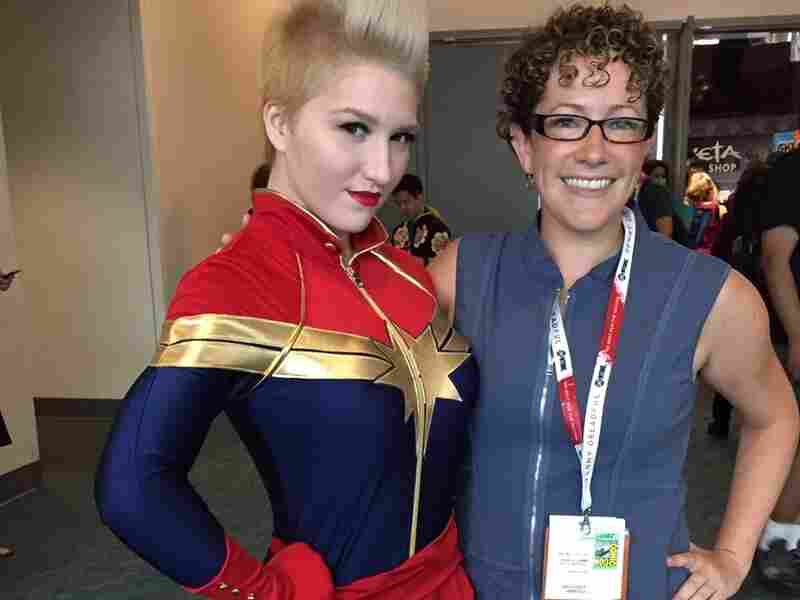 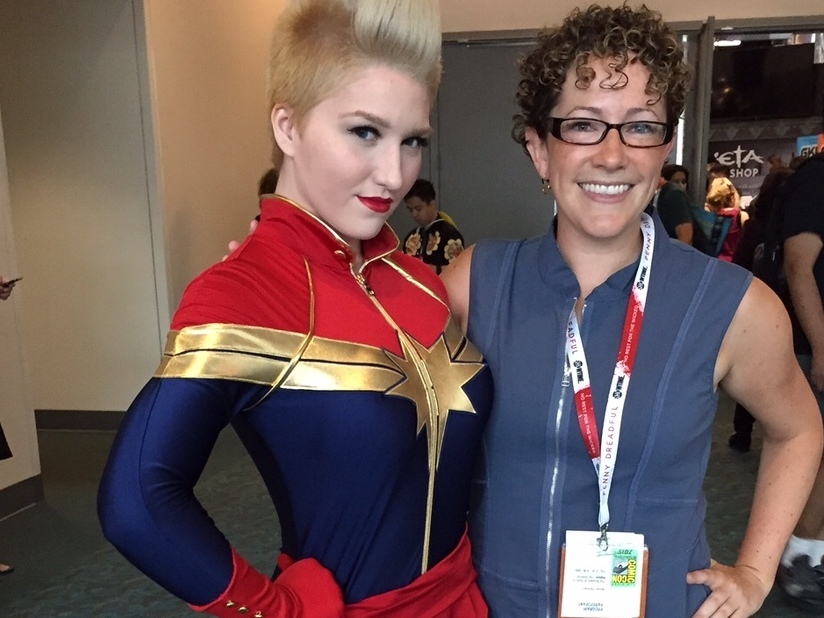 Perlman poses with an unnamed cosplayer dressed as the current version of Captain Marvel.

What better place to prepare for that than San Diego Comic-Con?

The convention is famously full of costumes — and Perlman says she got very excited the first time she saw someone dressed up as her new project, Captain Marvel. "She looked fantastic, so I completely accosted her and I kind of whispered it shyly, 'I'm writing the movie, take a picture with me please!' "

This year Perlman has time for the occasional selfie — and a quiet conversation in her hotel room before plunging into the convention center. That's completely unlike last year, which was a non-stop whirl of publicity for Guardians of the Galaxy — a project Perlman started when she was part of an experimental Marvel Studios screenwriting program. Beginning writers were given a choice of the company's more obscure properties.

"C-list, D-list, you know, it didn't get as far down as Hit Monkey or Squirrel Girl, but only a little bit above that," she laughs. "Things that nobody thought were ever going to get made."

Perlman felt drawn to Guardians of the Galaxy ... and you know what happened next. Or maybe you're one of the few moviegoers who never heard Vin Diesel wring a galaxy's worth of emotions out of the three words "I am Groot!"

'Guardians Of The Galaxy': Let's Hear It For F.U.N.

But here's the question: What do you do next, when your first big movie turns out to be this big? Well, you go even bigger, with Captain Marvel.

And you also go smaller: Perlman is set to write a comic book series based on Gamora, the green-skinned killer played by Zoe Saldana in Guardians.

Luckily, San Diego Comic-Con is the perfect place to learn. Perlman's arranged to meet up with some other women in the industry. "Just get any advice they might have on how to tackle a very different medium than screenwriting," she says.

Down on the convention floor, she starts shopping for good comics — which led to a fortunate meeting with Noelle Stevenson and Shannon Watters, the creators of Lumberjanes, a lighthearted comic about a group of girlfriends at a mysterious summer camp. They had some choice advice on writing comics.

"It's very hard and I wouldn't recommend it," Stevenson laughs.

Study the way other artists work, Watters says. Don't get too involved in the page layout. "A lot of people in their first comic will do like, 'and then there's a three-quarter panel, that takes up one third of the page.' Trust your artist."

And possibly the most important thing? "Always end on an inhale," Watters says, taking a dramatic breath.

Watters and Stevenson knew what they were talking about. Later that night, Lumberjanes won two Eisner awards (kind of like the Oscars of the comics world).

It's not news that women have a hard time in comics — that they've been marginalized and harassed. But here and now it feels like there's a network of women supporting and advising each other, a moment of connection in the chaos of the convention floor.

And that connection extends beyond this convention. If you're writing a screenplay, Perlman has advice for you: "I would say just write the best movie you possibly can, write the movie you want to see, and just keep at it."

Perlman's comic book is scheduled for sometime this year — and Captain Marvel will land in theaters in 2018.