Accessibility links
'Ant-Man': Not Just Small, But Downright Trifling Hard as Paul Rudd may try, he can't put a spark in Ant-Man, an underpowered Marvel movie that badly needed the visionary director it unfortunately lost along the way. 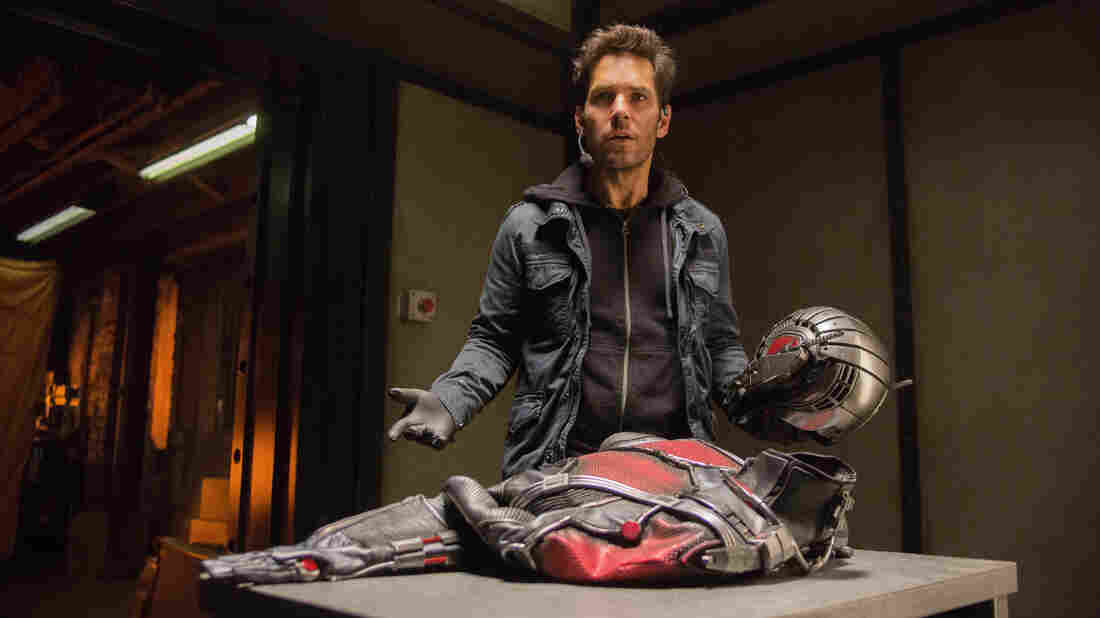 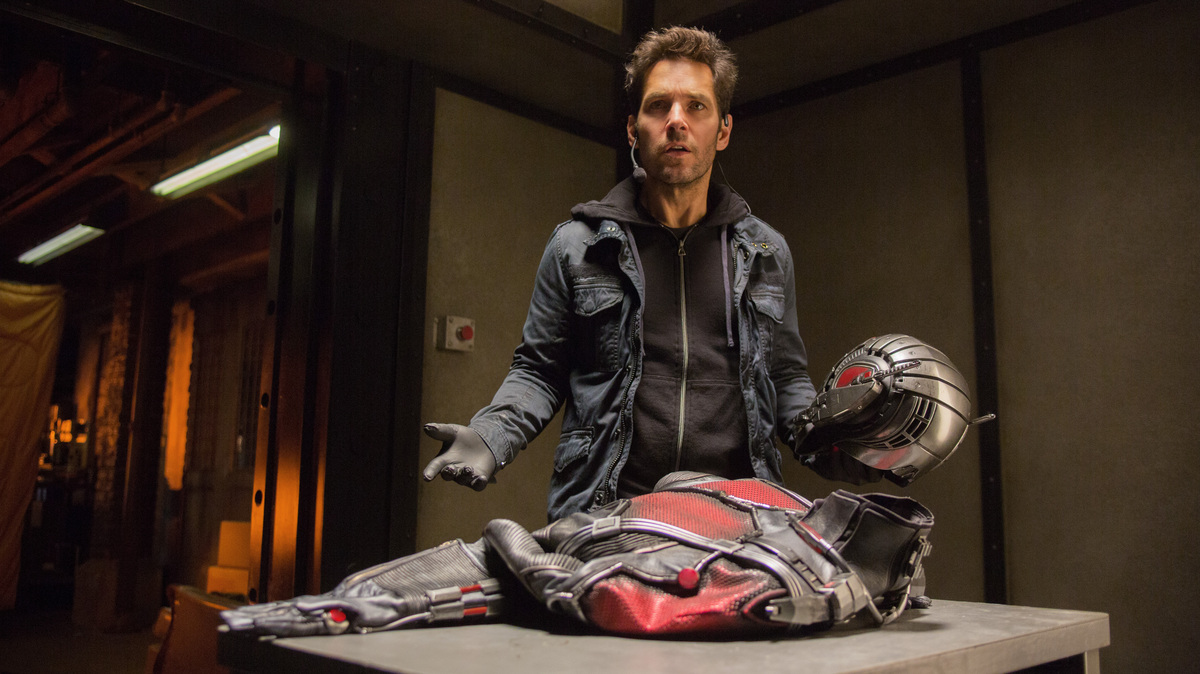 Maybe one day, if we're good boys and girls, we'll get to see the Edgar Wright cut of Ant-Man. Wright, a beloved cult filmmaker best known for his "Cornetto" trilogy of genre parodies, left the itty-bitty-superhero movie in a high-profile split with Marvel last year, after nearly a decade of work on the project. He was replaced by the decidedly less idiosyncratic Peyton Reed (Yes Man), though various parties have insisted the bones of the film remained in place, and Wright still has a co-writing and executive-producer credit. So it's difficult to know how much a Wright-helmed Ant-Man truly would've differed from Reed's. But pretending there's a more fascinating version of this film out there somewhere, like the Richard Donner cut of Superman II, is a great way to come to terms with how rote and unremarkable Ant-Man is.

Even without a principled defender of cinema at the helm, there should have been a lot going for Ant-Man. Its centerpiece is a Marvel hero who is inarguably, even proudly (in this film's depiction, anyway) a member of the company's B-team, which means he comes with fewer fan-imposed restrictions. His power — the ability to shrink and grow at the push of a button, while controlling an army of ants with his mind — is goofy as all get out. And he's played by ageless funnyman Paul Rudd, of Anchorman and countless others, a guy who is the living embodiment of a humorous quip. That's a potent combination; Guardians of the Galaxy made it work with similar ingredients. But here, two hours transpire with very little of merit to show for it. Did time shrink when we weren't looking, like Ant-Man does at one point to escape a prison cell?

We open in flashback on Hank Pym (a grizzly Michael Douglas), mad scientist for good and enemy to Iron Man's Stark dynasty, furiously leaving his own company over a dispute regarding his secret formula. Pym, as all good nerds know, was the original Ant-Man, and later we glimpse blurry photos of him in action during his '50s prime — though he mostly just looks like a splotch on the camera. (Pause to note that this film sorely could have used an "Amazing Stories"-style reel of Ant-Man's exploits, with era-appropriate miniature sets. Alas, 'twas not to be.) He recruits Scott Lang (Rudd), an electrical engineer turned burglar, just finishing a prison sentence and trying to turn his life around for the good of his estranged daughter. To stop his rival, the bald megalomaniac Darren Cross (Corey Stoll, smug as a bug in a rug), from unleashing his shrink tech upon the world, Pym needs a second-generation Ant-Man to don the ancient suit and infiltrate the lab from within.

There are lots of family issues, although this being a movie about creatures with hive minds, all the emphasis on personal emotion seems misplaced. Beyond Scott's ritual movie-hero devotion to his daughter, there's also his estranged wife (Judy Greer) and the dreaded New Boyfriend (Bobby Cannavale), who's also a cop, although they could've saved time by just making the otherwise useless wife the cop. And there's Pym's daughter Hope van Dyne (Evangeline Lilly), who is angry that Scott is taking over the Ant-Man suit instead of her. I didn't realize until the credits were rolling that Hope's anger is the only reason for her existence — the back-pat to justify such a thankless role is to pretend she could've had a shot at the big time. The Pyms' endless dialogue about their family history reeks of overheated exposition, like a dung heap waiting to be fertilized so that action sequences may grow.

Those effects scenes are the only ones projecting the sense of cheesy adventure that should be all over this thing. When Scott shrinks for the first time, he becomes a prisoner in his bathtub before falling through his apartment's floorboards and onto a spinning record at an EDM party death trap. Later, he and Darren — who has by this point become the laser-shooting pest Yellowjacket — stage an epic battle in a child's playroom. They shoot at each other while riding model trains, which is as it should be. Why Ant-Man's insta-grow weapons aren't put to more use (like, say, on the terrifying rabbit doll Scott buys his daughter) is beyond me.

When Rudd gets to crack a smile, or when he lets his sidekick Michael Peña do it for him, the film gets a spark. But most of what's in Ant-Man has also been in every other Marvel movie to date, including but not limited to the superfluous Avenger cameo. To be interesting on their own merits, Marvel movies need a genuinely creative personality at the helm: your Whedons, your Russos, your Gunns. Without Wright, this Ant-Man doesn't even bear the signs of a creative dispute — it's too small to bear many signs at all, and it's shrinking as we speak.