Accessibility links
Men Strut Their Stuff At Their Very Own New York Fashion Week This week was the debut of New York Fashion Week: Men's. Sixty designers and some big-name sponsors showed up. Jacki Lyden went behind the scenes for The Seams, our series about clothing as culture. 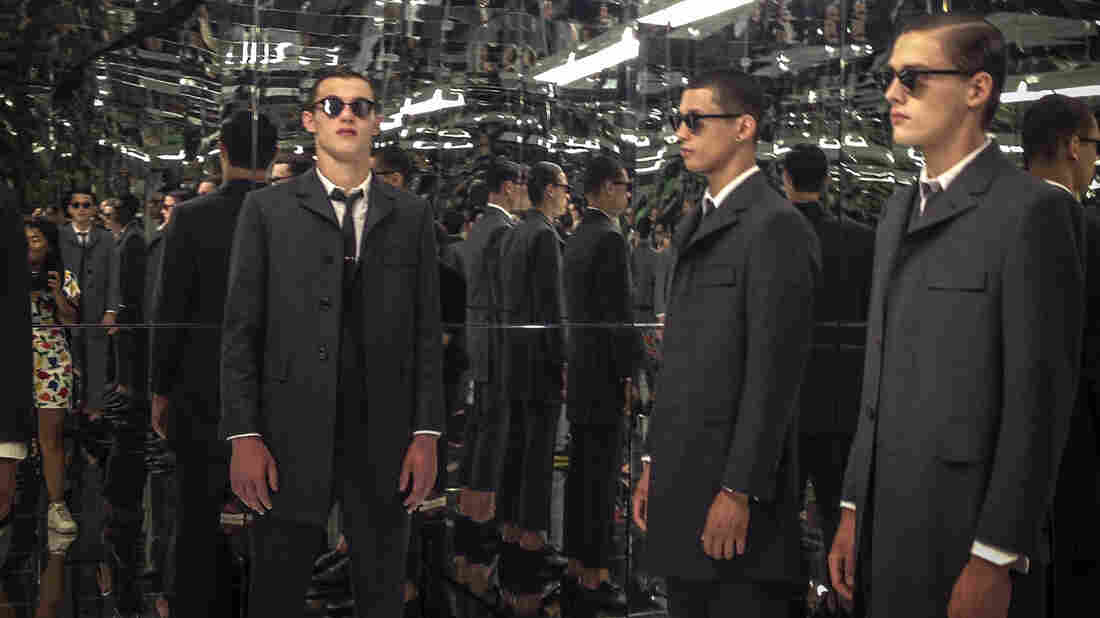 Designer Thom Browne says he usually shows his men's collections in Paris, but he felt it was important to support the first Fashion Week for men in New York. Jacki Lyden hide caption 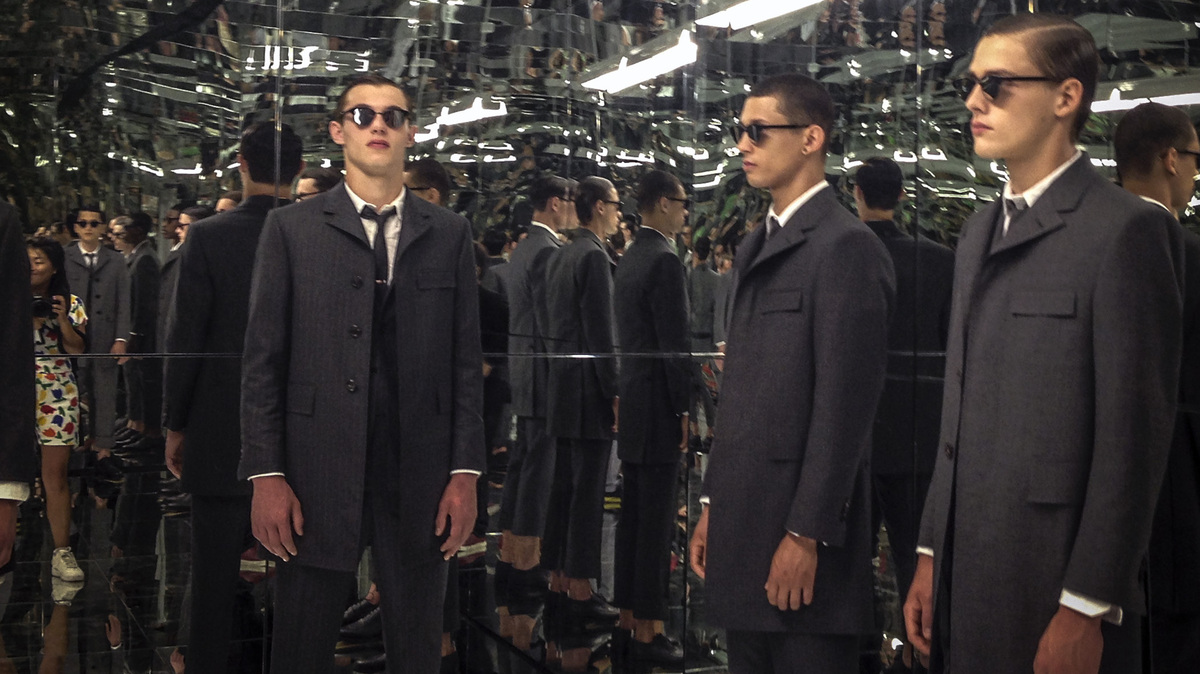 Designer Thom Browne says he usually shows his men's collections in Paris, but he felt it was important to support the first Fashion Week for men in New York.

Celebrated designer Thom Browne opened the week: "I do show my men's collection in Paris," he says. "But, it being the inaugural season for Men's Fashion Week here in New York, it was really important for me to be here and support men's fashion here in New York." 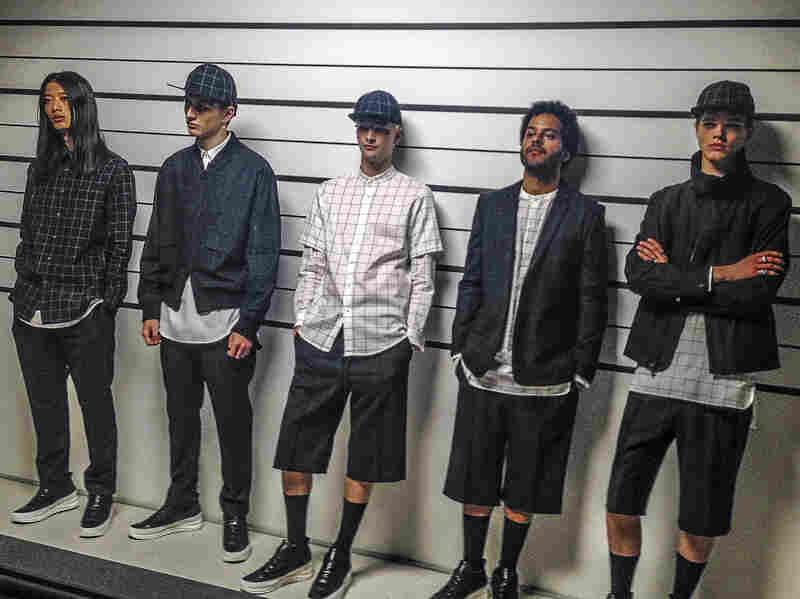 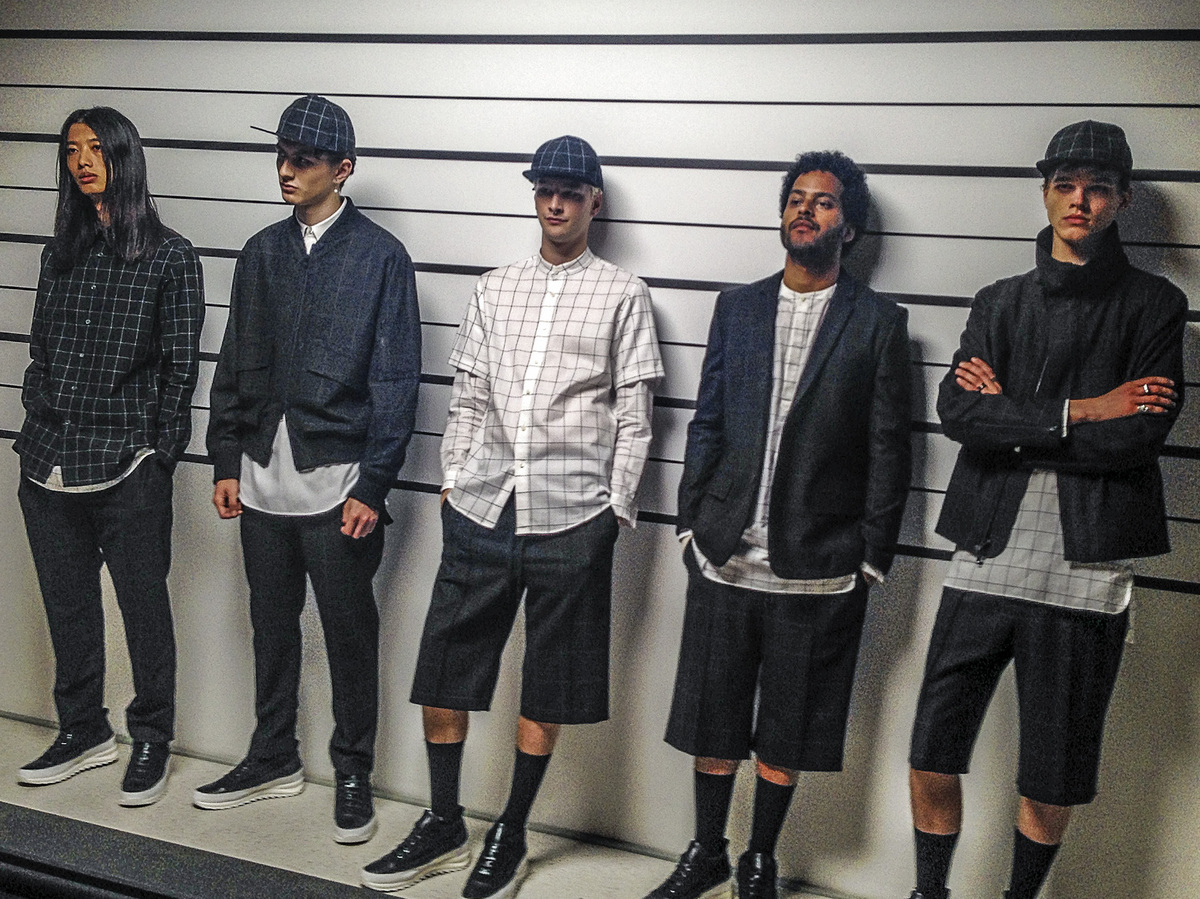 Buzzed-about designers Public School showed their collection in the form of a mock police lineup.

The very buzzy designers Public School showed their spring 2016 collection in a mock police lineup — Asian men, white men, black men, a Sikh wearing a turban, all side by side in front of an official-looking backdrop as an announcer beckoned each to step forward in turn.

Dao-Yi Chow is one of the co-founders of Public School, along with Maxwell Osborne. "We wanted to draw that parallel, where basically everyone is dressed the same, side by side," Chow says. "Everyone is the same. The message is about unity and solidarity, especially in these times."

To Chow, a New York City native, fashion can be social commentary. He and Osborne have been nurtured by the Council of Fashion Designers of America, the fashion industry trade association that's putting on this show. This year, Chow and Osborne were named creative directors at DKNY.

One reason menswear is having such a significant moment? Social media. Bruce Pask, the men's fashion director for Bergdorf Goodman, says information makes for a confident and curious shopper. "I think that information has served to really educate and excite a male shopper. And I think that is great for the business in general."

The market-analysis firm Ibisworld says for menswear, sales in brick-and-mortar stores are growing 4 percent a year. Online, sales are even better: There's an average of 17 percent annual growth rate, each year, over the past five years — and the CFDA wants to take advantage of this.

In the past, menswear has shown with the women in September. Now, the designers get their own stand-alone event, complete with big-name sponsors like Amazon Fashion and Cadillac, who want to support American design. 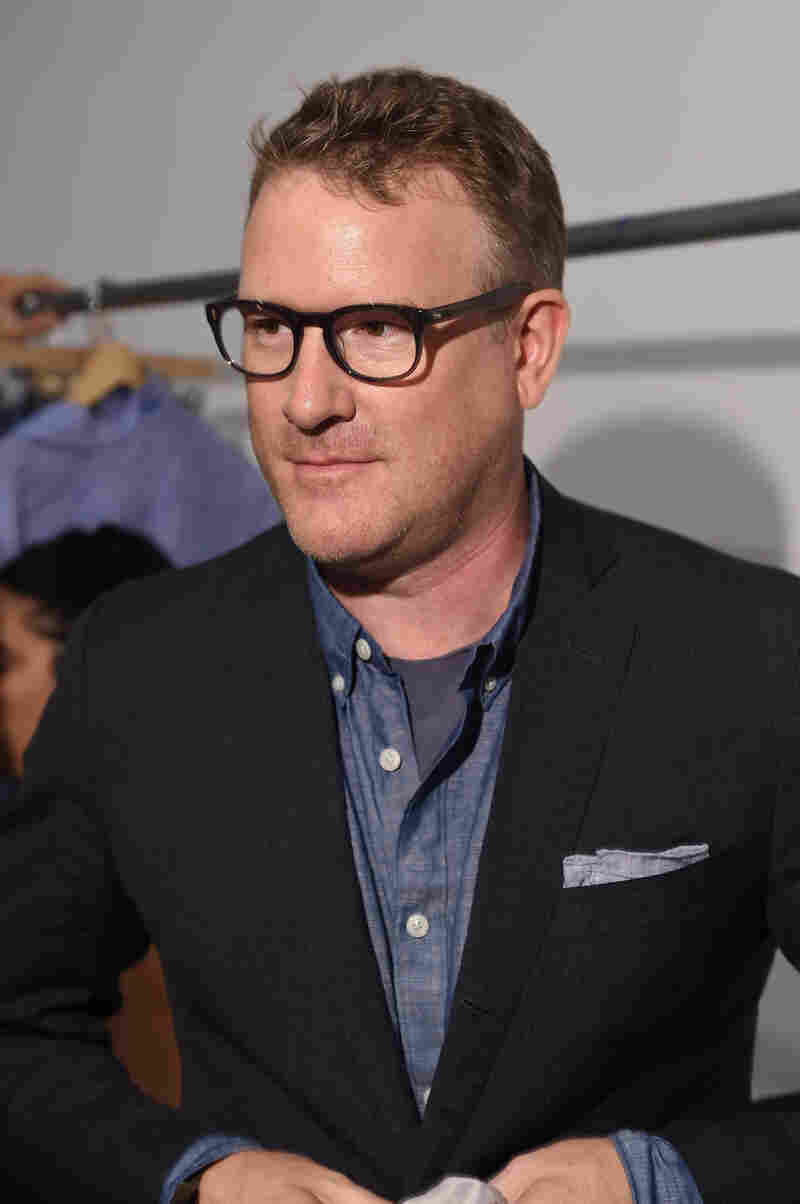 Todd Snyder backstage during his show — the biggest one he has ever done. Michael Loccisano/Getty Images hide caption 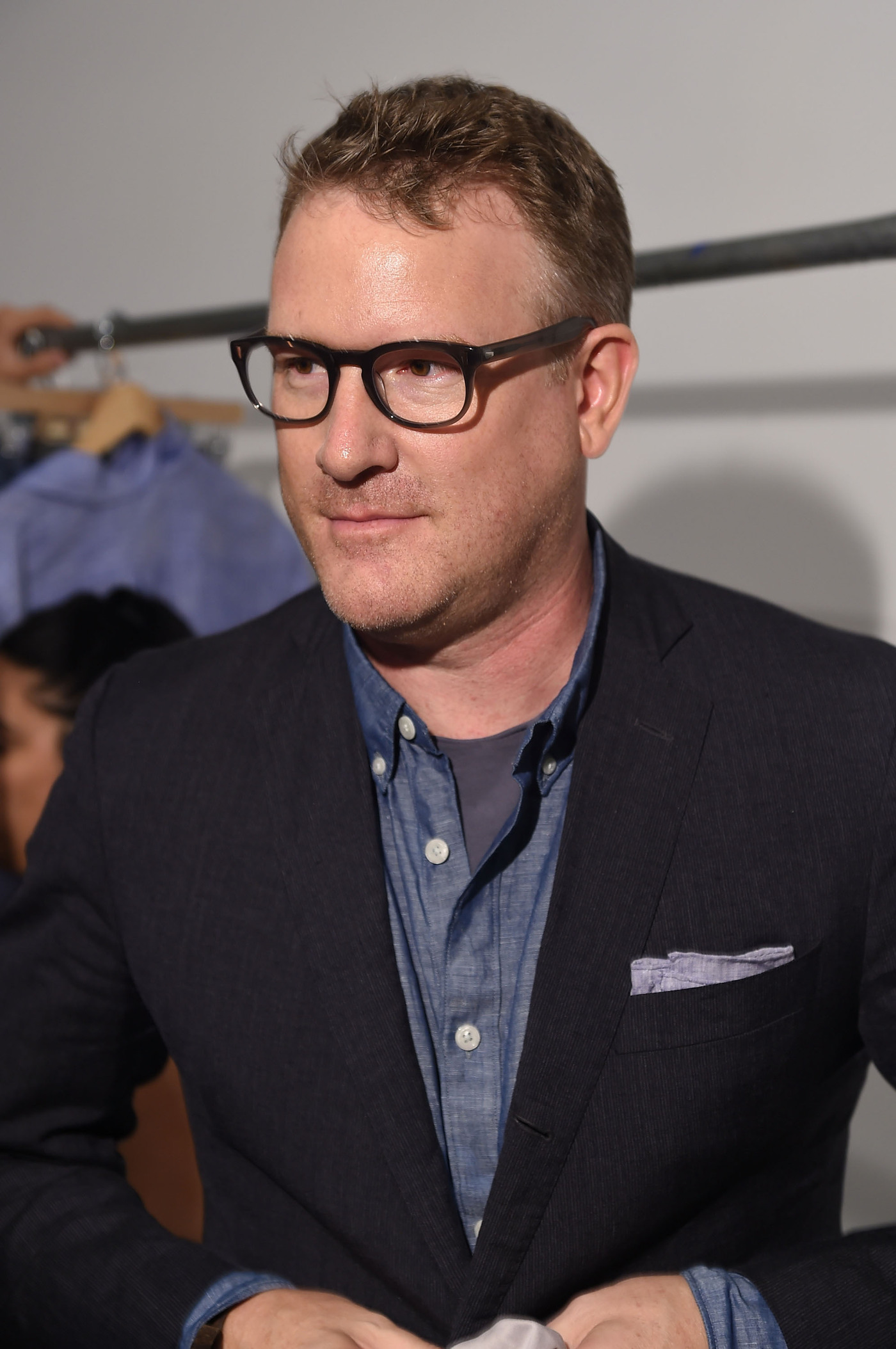 Todd Snyder backstage during his show — the biggest one he has ever done.

No designer is more all-American than Todd Snyder. The Iowa native and former high school athlete is suddenly breaking out after 20 years in fashion. This week, he spent $75,000 putting on his biggest show ever, with a large audience and deep bench of international buyers and editors.

"I really wanted to make it the best I can, just because I felt that eyes are upon us and we need to represent the U.S. well. I feel like I'm in Olympic battle. You're always up against, you know, the Italians or the French or U.K. or Japan," he says. "It's always important to, like, show your best."

It's also important just to show up as a huge variety of people did: Athletes, musicians, actors ... and the people who dress them, like Memsor Kamarake, the stylist for the acclaimed actor Anthony Mackie, who plays the superhero Falcon in movies from Marvel Studios.

"I think it's great to check out the up-and-coming, bubbling talent. So I just love — if there's a name I don't know — to go and check it out. Because that's what my job is. It's my job to also help support the talent that's here in this city. Having such a wide range of talent on display just makes my job a ... lot easier," he says.