Accessibility links
Amy Schumer And Judd Apatow Talk Storytelling, Commitment And Spooning In 2011, Apatow heard Schumer on the radio and was struck by her candor. The two went on to collaborate on the film Trainwreck, about a woman who doesn't want a relationship. 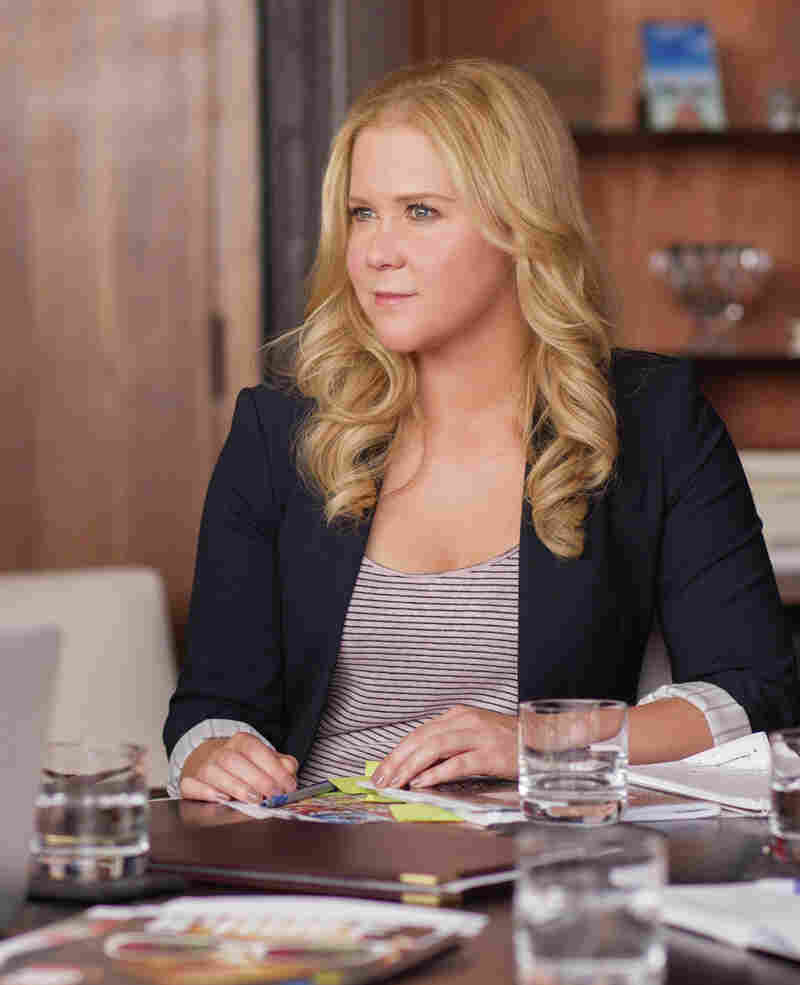 Trainwreck, written by Amy Schumer and directed by Judd Apatow, stars Schumer as a woman who lives her life without apologies. Mary Cybulski/Universal Pictures hide caption 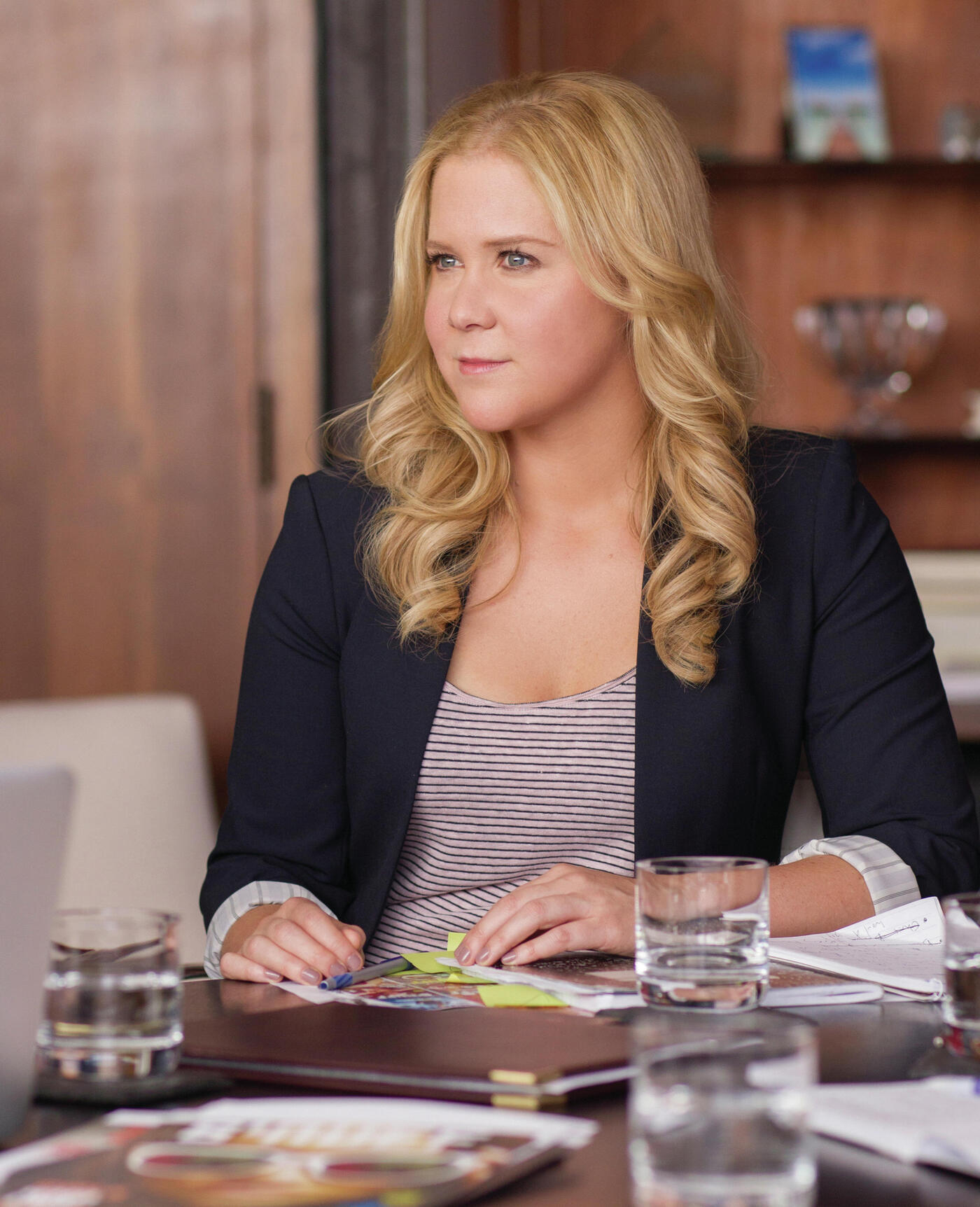 Trainwreck, written by Amy Schumer and directed by Judd Apatow, stars Schumer as a woman who lives her life without apologies.

Comedian Amy Schumer is — by her own admission — an oversharer. Whether she's talking about one-night stands or drinking habits, she has a tendency to bare all.

In 2011, Schumer's blend of honesty and humor caught the attention of director Judd Apatow, who heard her being interviewed on the radio by Howard Stern.

"She was telling stories about her relationships and also stories about her dad, who has multiple sclerosis ... and the stories were very dark and sad, but ... they were really funny and warm at the same time," Apatow tells Fresh Air's Terry Gross. "I remember sitting in the car thinking, 'This is a hilarious stand-up comedian, and I don't think she understands what a great storyteller she is.' "

Apatow contacted Schumer and the two went on to collaborate on the screenplay for Trainwreck. In the film, which Apatow directed, Schumer plays a single woman who doesn't want to commit to a relationship. It's a role that resonates with the comedian.

"I've always had this major fear of having my heart very broken," she tells Gross. "I've mostly been in long-term relationships, but I think I've never really given myself over to them for the fear of being hurt." 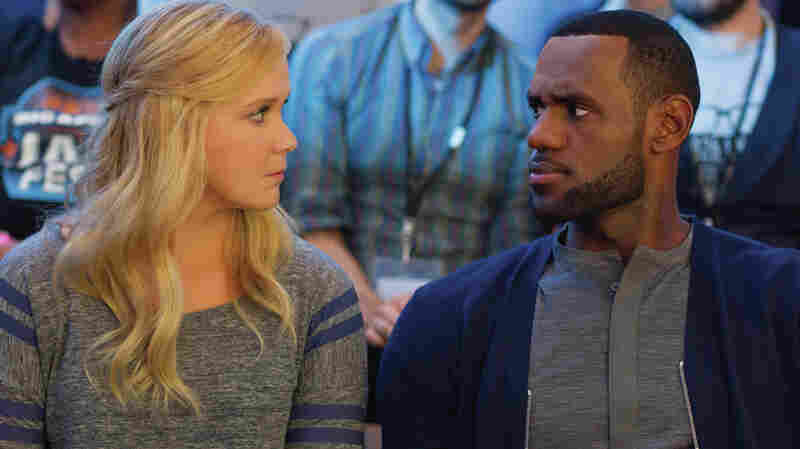 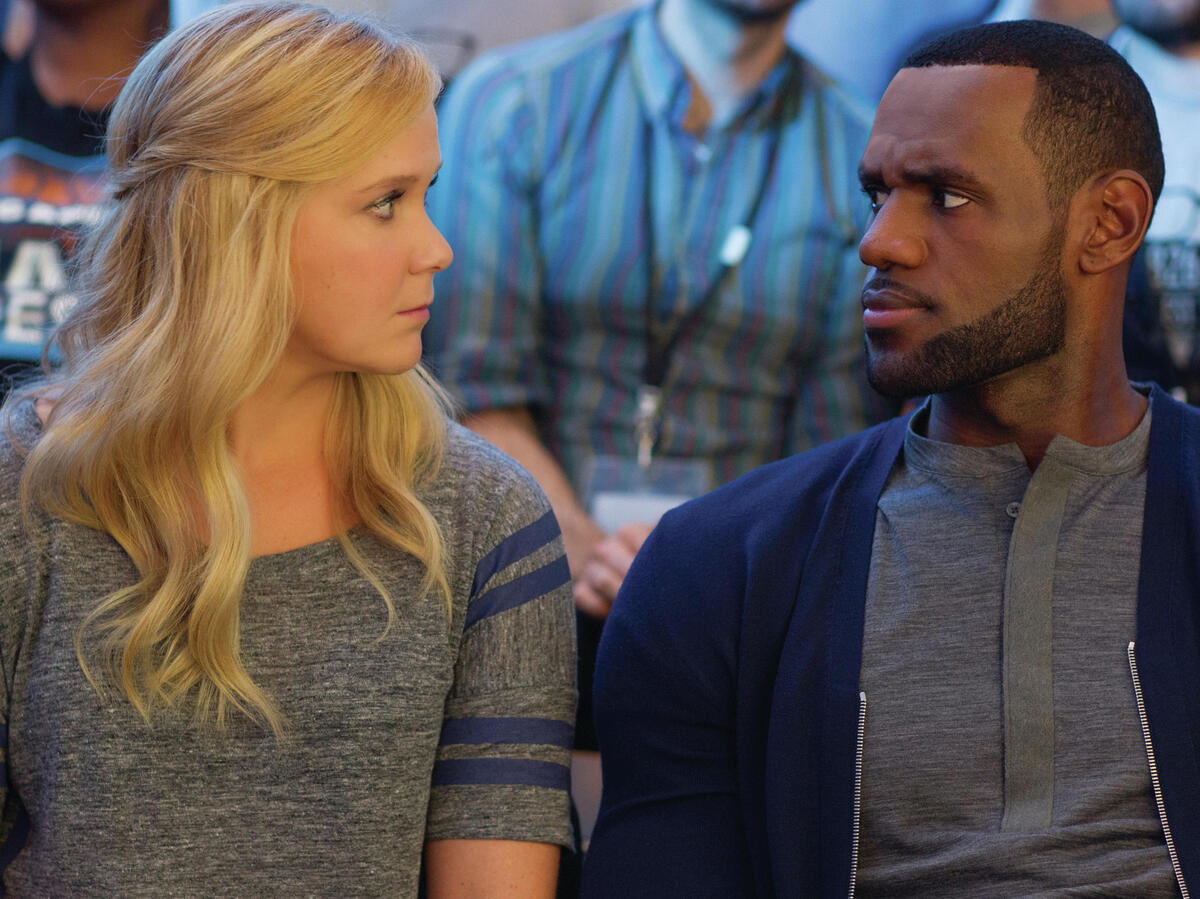 LeBron James (playing himself) asks Amy about her intentions in Trainwreck.

Schumer's character in Trainwreck has a sister who is married and has one child and another on the way. The sisters struggle to see eye-to-eye on relationships, raising a family and how to care for their ailing father. The sisters' relationship is similar to Amy's relationship with her real life younger sister, Kim Caramele. Caramele left a job as a school psychologist in Chicago to work as a producer and writer on the Comedy Central show Inside Amy Schumer.

Apatow and Schumer talk with Gross about their collaboration on Trainwreck, and — if you listen to the audio above — at the end you can hear Caramele talk about what it was like to watch herself portrayed onscreen.

Amy Schumer: A lot of this version of myself is based on me in college, I would say my sophomore year specifically, where I did have a bunch of partners who I knew I wasn't going to date.

Schumer: Yes, song-writing partners, Judd. And we tried to keep Judd very sheltered. We told him that his daughters are here because of storks bringing them. So there were these experiences and, yeah, sometimes you're like, "I'm going to spend the night here," and then there's some guy and he's breathing on you and you're just like, "Ugh!" you just resent him.

So I was like, what if this were different if I were to actually say to him, "I'm not just going to try to be the thing that you want and try to be this perfect person for you? If I'm going to stay here I'm going to put a pillow between us and don't breathe on me." ...

For me personally, there's this misconception that women want to be held all night, and some do, and some guys like that, and I love spooning ... I love to be held, I'm very affectionate, but when I go to sleep I'm like a "please-don't-come anywhere-near-me" person. 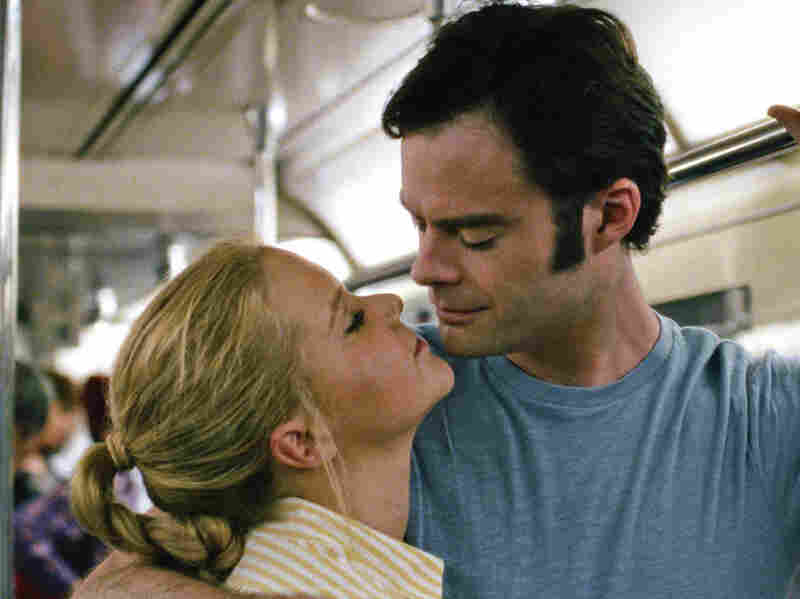 Schumer: Truly, it did not make me feel self-conscious. I think, as a woman, I just kind of feel like wherever my weight is, if it's up or down when I take off my clothes there's a certain sense of "You're welcome," you know? And I feel like I look like a real person and I'm soft and squishy but I'm a woman and I feel sexy and I got to tell you, Ter, when you're naked with someone who is jacked like that, you still feel hot. The way it feels to touch a person like that, for me, it wasn't as exciting as I kind of thought it would be. ...

Apatow: It's like having a Mack Truck on you.

Schumer: Yeah, it's like a refrigerator fell on you. I like someone who is a little squishier.

On her father's reaction to seeing himself portrayed onscreen

Schumer: If I thought he would be offended by anything that would definitely interfere with my writing. There's a lot I didn't put in the movie about both of my parents, but my dad has seen all of his scenes in the movie and he loves it. It's the cloth that I'm cut from; he's also an oversharer and someone who is very open about being a human being and the mistakes he's made and he knows it's an accurate portrayal and he's thrilled, honestly. I'm not like, "The art comes first!" If I thought anybody that would be hurt by something, I would never write about it.

On her experience of helping her father move into assisted living

Schumer: The way that he went into assisted living was that he remarried and he moved in with this woman — he was living with her in New Orleans — and then she, out of nowhere, kind of kicked him out and left him on the side of the road in his wheelchair, and we had to just go get him and move him into assisted living. So she kept all of his stuff. ... This might've been ... six years ago. Yeah, it was horrible. I got the call and I had to go onstage right after and, yeah, it was traumatizing.

On how their own parents' divorces influenced their own relationships

Schumer: I think, for me, I honestly haven't met anyone yet that I want to be with forever, that I would want to commit to, that I would want to start a family with. I love that idea and I'd be into that. I don't know how realistic I think monogamy is for some people, and I sort of have some evolving views of that, but I love the idea of making a commitment to someone and having a family, but, yeah, I've never met — there's no "one that got away." I never ran from something that would've been good. ...

My reason for not marrying young like some of my friends and starting a family is because I didn't want to do it. I never fanaticized about being married; I never played "wedding" or "bride" when I was a little kid. My interests were in other places and I wasn't lucky enough to meet that person.

Apatow: As a kid you just think, "Why didn't you guys try harder? Why didn't you figure it out?" because you only see it through your eyes, of how it affects you. I think it made me think there's work that goes into it. ... My parents should not have been together, so as you get older you realize, "There was no way that was going to work anyway." ... But I got very lucky I met an amazing person young and I have two amazing kids, so I'm not in the situation my parents were in. I'm in a very happy situation that still requires work, but it wasn't what my parents were dealing with.

On the 'Twelve Angry Men' episode of Inside Amy Schumer, in which 12 men debate whether Amy is "hot enough" for television, a parody of the 1957 film

Schumer: This was the first scene that I thought of over our hiatus. ... My two friends, [who are] male comics, were deliberating at a party if they thought Michelle Williams was hot, the actress, and they're both really debating this and, "I don't think I'd have sex with her," and I'm just looking at them and they look like complete gargoyles, you know? I just kept thinking of the word "deliberating" and I was like, "What's the ultimate deliberation?" 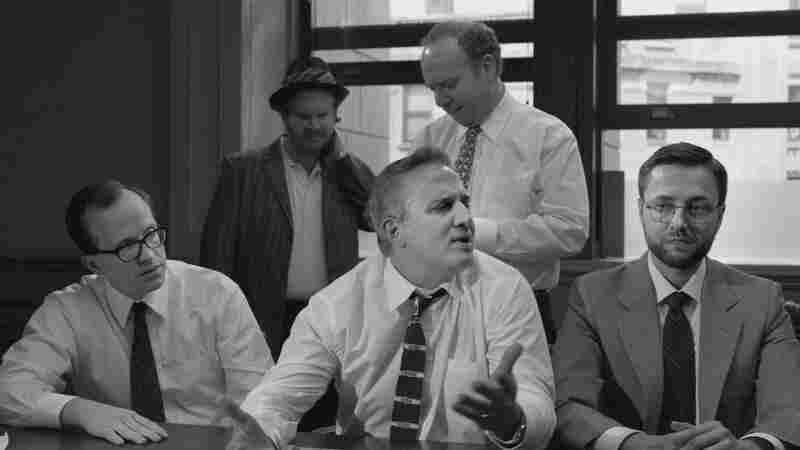 Schumer spoofs the 1957 film Inside Angry Men with a jury of men who deliberate over whether she is hot enough for television. Above, jurors (front, from left) Chris Gethard, Nick DiPaolo and Vincent Kartheiser and (back from left) Henry Zebrowski and Paul Giamatti. Comedy Central hide caption 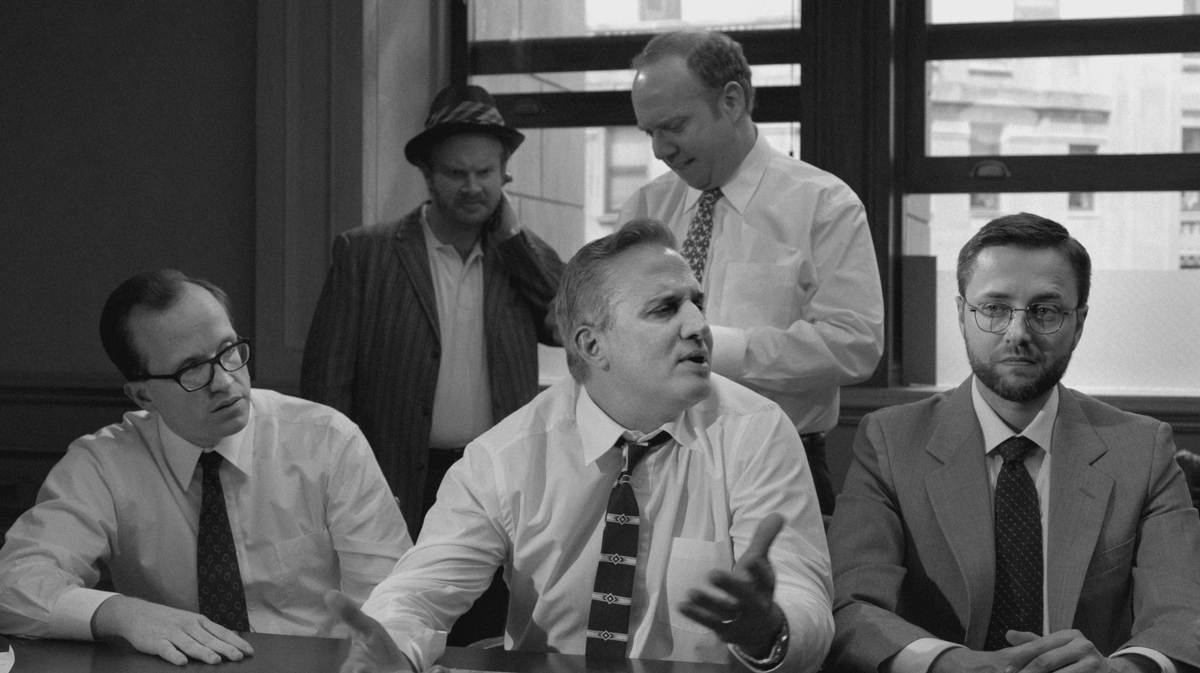 Schumer spoofs the 1957 film Inside Angry Men with a jury of men who deliberate over whether she is hot enough for television. Above, jurors (front, from left) Chris Gethard, Nick DiPaolo and Vincent Kartheiser and (back from left) Henry Zebrowski and Paul Giamatti.

There's a constant stream of articles and comments about Lena [Dunham] and Mindy [Kaling] and myself, and I love that movie, I've seen it a million times, and I just thought, "What if I did a scene, just a scene from it?" I thought it could be half the episode and just really re-create it and use amazing actors ... and Kevin Kane, who is one of the producers on the show, was like, "What if you made it the whole episode?" I was just so ecstatic. It just breathed a whole new life into me. ...

I was like, "I'm going to write this thing." So I wrote it and it was the hardest I've ever worked [on] and it was really difficult to cook up. ... I got kind of upset, it got to me. I had been writing, I was on the road, I'm on trains and on planes and I'm writing horrible things about myself — saying I'm built like a linebacker, I've got Cabbage Patch-like features. ....

I spent so much time writing that and then writing which shots I wanted to re-create and preparing to direct it. ... The network said, "Sure." ... And I'm so proud of it. I can't believe it happened. ... It was so liberating to write this and I just feel very free from judgment and it was really liberating and therapeutic.