Accessibility links
Professor Delivers A Crash Course In Real Estate Investing To Detroiters Housing prices there have dropped, opening up investment opportunities — but only if you know how to invest. One professor is teaching inner-city residents how to get in on the market. 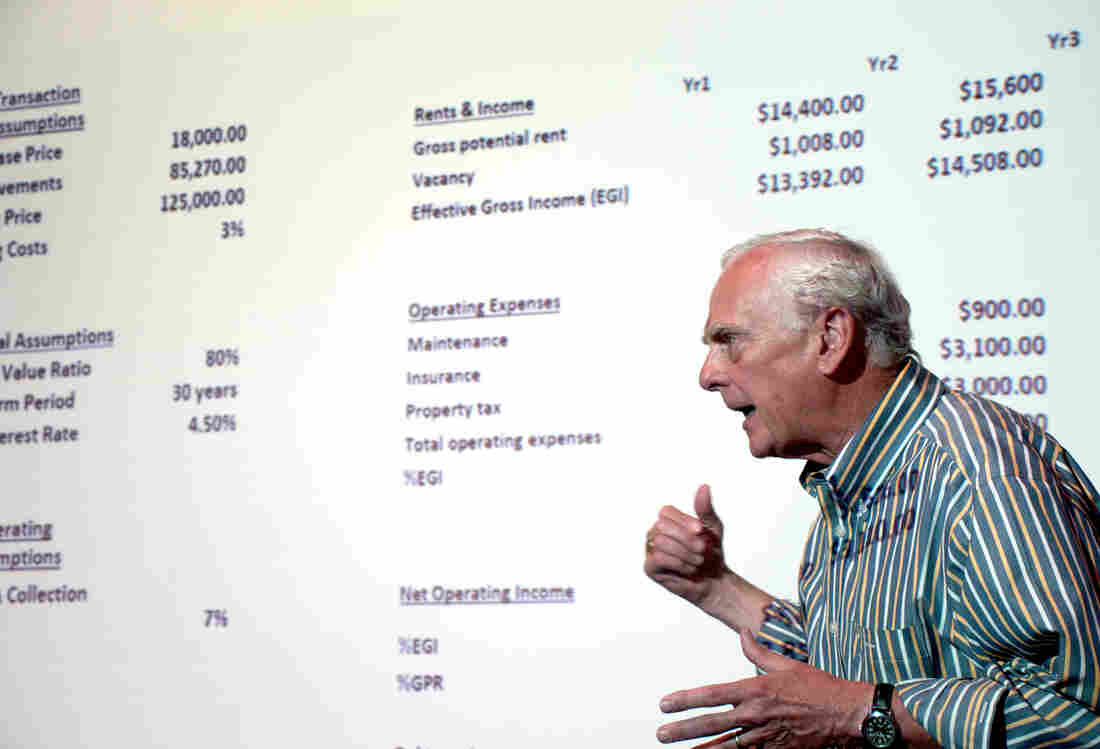 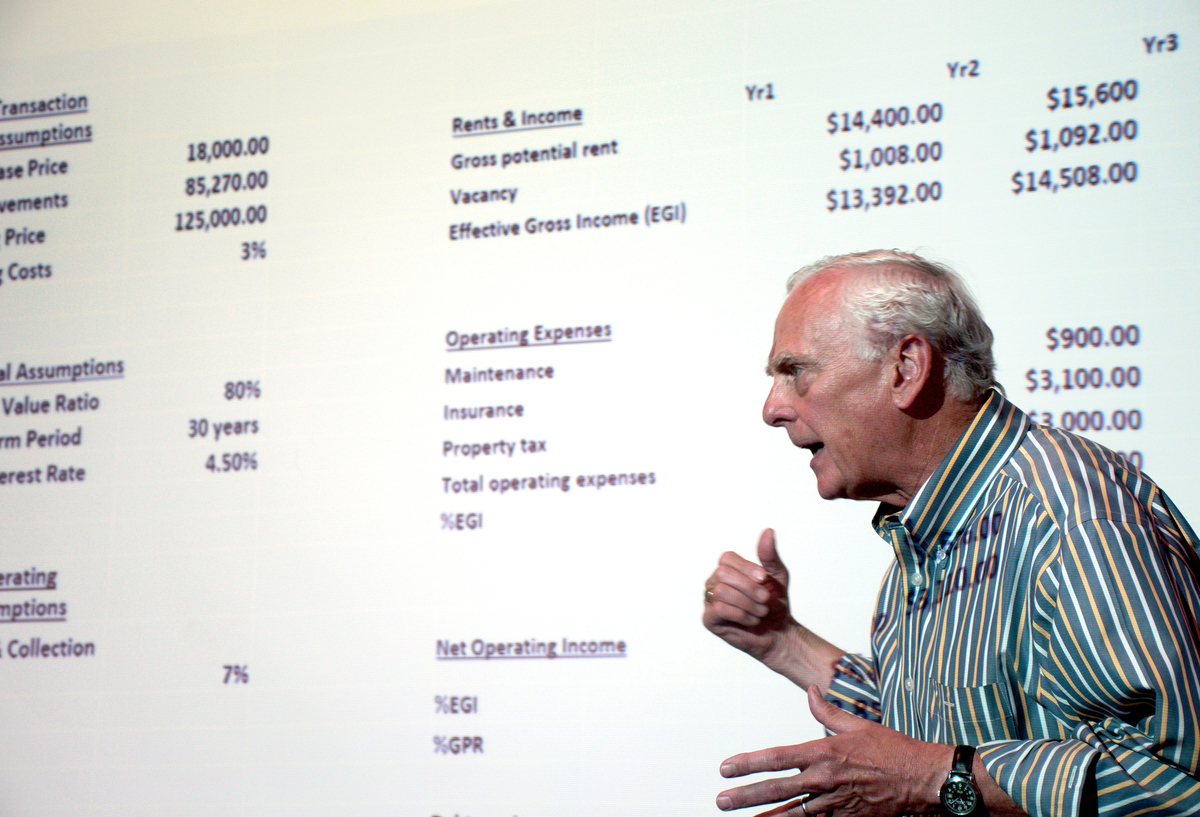 You can snap up a home for just a few thousand dollars in Detroit these days. But just because a property is cheap, that doesn't necessarily make it a good investment.

Peter Allen with the University of Michigan is equipping local residents with housing investment know-how with the hope that they can go on to revitalize their neighborhoods.

Allen has been teaching a real estate investing course to students in Ann Arbor, Mich., for more than three decades. This summer, 45 miles east in Midtown Detroit, he's dedicating his Saturdays to teaching city residents how to become shrewd investors, too.

"I crammed this [class] into four weeks for you all, and I was a little sleepless last night," says Allen, standing in front of the classroom.

He's a little sleepless because he's throwing a lot of new terms and principles at his class pretty quickly.

His 18 students are mostly middle-aged, African-American community leaders. Allen requires them to target a home in Detroit that they could buy, then to work through the numbers.

Lanita Carter stands in front of the classroom showing repair projections for a 900-square-foot house.

"It needs new floors, the plumbing needs to be fixed, the electricity ... ," she says, rattling off a list of repairs.

Now, Allen is helping her evaluate whether it'd be worth taking out a mortgage for repair costs, briefly living in it and then eventually renting it out.

He adds up a few more figures, then reaches the conclusion.

That would leave her earning about $250 a month off of a $4,000 cash down payment. He calls that an excellent rate of return.

Allen estimates that he has taught 3,500 students over 34 years in Ann Arbor. He's now in Detroit because he says he wants to help locals revitalize their own neighborhoods through real estate investing.

"This is the best way — individual, grass-roots, entrepreneurial, house-by-house, skin-in-the-game approach — to neighborhood revitalization than any government program, or city-directed program could achieve," he says.

It's not a get-rich-quick class. It's being offered with help from the University of Michigan's Schools of Social Work and Urban Planning, along with the Skillman Foundation, a Detroit organization that helps schoolchildren.

Allen is volunteering his time and says he'd like to continue teaching in Detroit for another five to 10 years.

"I tell the students the only compensation for me is that when they're finished fixing up a house, they invite me over for dinner," he says.

The students in Allen's Detroit class might be more cautious than the average home buyer. After all, they are taking a class first.

Consider Dana Hart, a woman in her early 40s. We walked around Detroit's North End neighborhood where she rents.

She's considering going against her dad's advice because she sees property values in Detroit coming back.

"If you don't own property, you have a likelihood of being pushed out," she says. "And I don't want to be pushed out of this neighborhood."

Hart has her eye on a place with boarded-up windows, graffiti and overgrown weeds, but she doesn't see an eyesore.

"I think brick, I think look at the steps and the landings that you can put flowers on. I look at the balcony and I'm like, 'Oh you can sit there and relax,' " she says.

And now she thinks about property taxes, interest rates and the first three rules of real estate, which everyone knows have to do with location.

"I know how to do, you know, walkability scores and such," she says. "These things that add value to that property, not just the property itself."

There are some things, though, that are hard to predict in Detroit.

I went to the new home of Lanita Carter, who spoke in class. It's a charming bungalow, at least from the outside.

"It was used as a doghouse. So, that's why, you don't want to go in right now," she says from the front porch. "There were literally seven pit bulls inside this home."

You can still detect the faint odor of canine urine wafting out from inside. The dogs were protecting three squatters who were living there illegally. 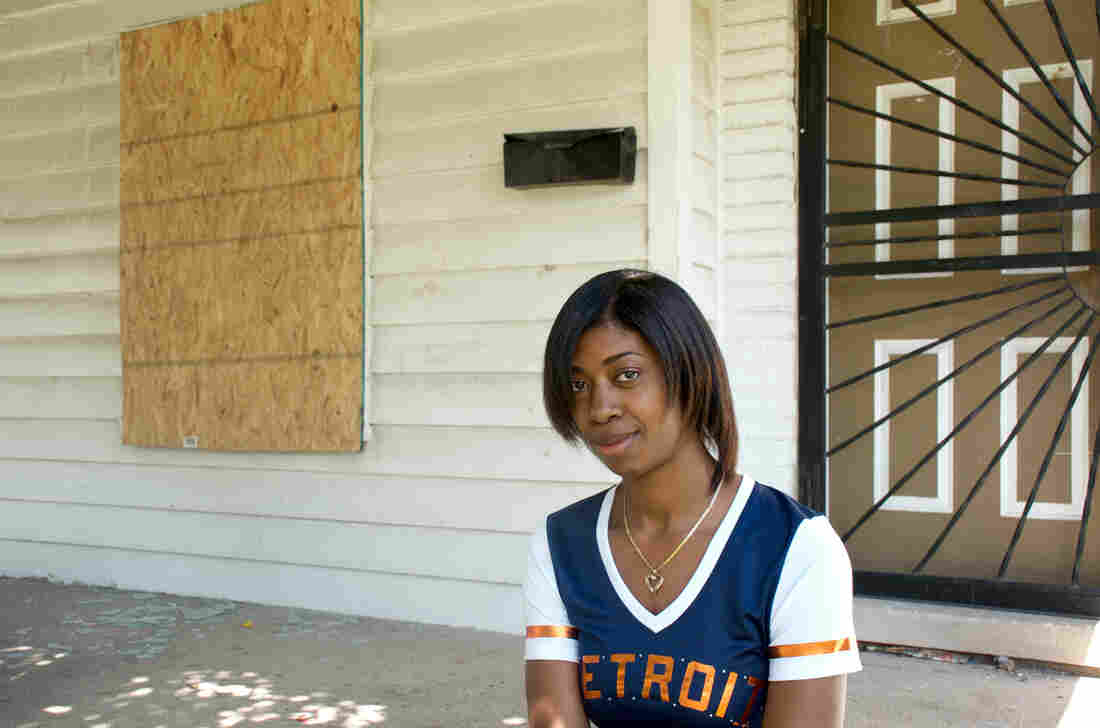 Lanita Carter sits on the porch of the home she purchased in Detroit. Jason Margolis /NPR hide caption

Back in the classroom, Peter Allen used this as a teachable moment.

"As you look back on that process could you have improved upon it?" he asks Carter.

She says she would've moved faster. "I bought the house in October and they just got evicted last month," she says.

The squatters did a lot of damage in that time, and she eventually paid a bailiff $2,000 to evict them.

Allen asks if it might've been better to offer them $1,000 to get out.

That might seem like a form of extortion, but ultimately, Allen says, it's really just about being a wise investor.