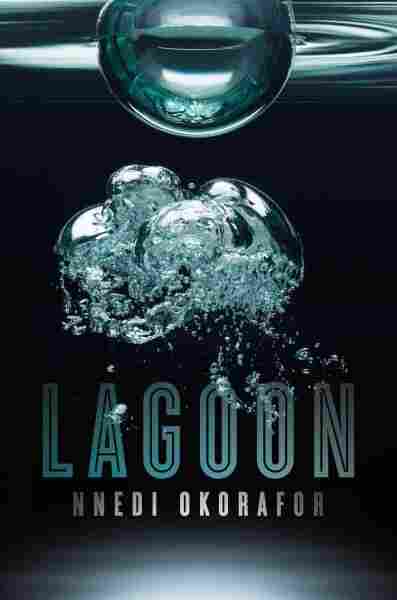 A singer, a soldier, and a scientist walk onto Bar Beach.

In many ways, Bar Beach was a perfect sample of Nigerian society. It was a place of mixing. The ocean mixed with the land and the wealthy mixed with the poor. Bar Beach attracted drug dealers, squatters, various accents and languages, seagulls, garbage, biting flies, tourists, all kinds of religious zealots, hawkers, prostitutes, johns, water-loving children and their careless parents.

What happens next is no joke: A gigantic fist-shaped wave rises out of the ocean and swallows them up, dragging them down to meet the aliens who've parked their ship in the depths, purifying the polluted waters and granting the local marine life's every desire to be bigger, stronger, faster than they've been before. Swordfish grow golden and spiky, flying fish have razor-fins, cephalopods become huger and smarter.

And Anthony, Agu, and Adaora emerge shaken, changed, and accompanied by an alien ambassador in human form calling herself Ayodele as they try to make enough sense of what's happened to tell the rest of Lagos and the world. From that moment on the narrative is dazzlingly refracted through the eyes of bishops, children, presidents, spiders, swordfish, and many, many more, as Lagos erupts in response to contact with aliens who call themselves change.

I felt this book must have been written at least partially in response to Neill Blomkamp's film District 9, an anti-racist fable that drew criticism for its stereotypically negative portrayal of Nigerians; in Lagoon, instead, we have a First Contact story that provides the context for a wide-ranging survey of the people, lives and beliefs that make up the city of Lagos.

Lagoon absolutely teems with characters, perspectives, and Englishes. Everything about it is diverse and varied: In structure it feels part oral tradition, part theater, part screenplay, part memoir; in content it bubbles over with characters from different species, ethnicities, classes, genders, sexualities, religions. If ever a book set out to mirror the vibrant, brimming city for which it was almost titled, Lagoon has certainly done it. But, consequently — and perhaps appropriately — it's as choppy a read as the ocean on a stormy day.

The fast-paced perspective switching is of a piece with the swirling, disorienting nature of the plot: Lagos is introduced to aliens who can shift their shape, heal wounds, resist death and change the bodies of the things around them — and claim to want to change human lives for the better. Thematically it makes perfect sense for the chapters — some no longer than a page — to be shifting, chancy things, sometimes in first-person, sometimes in third, sometimes featuring an observing narrator asking "what would you do?" and sometimes showcasing the satisfaction of a sentient road as it devours the deaths of those killed on it.

The experience of reading it, though, was sometimes necessarily jarring, as the shape of the text shifted from one mode to the next like aliens themselves. It was sometimes difficult to match my expectations to my reading: I want different things, after all, from characters in a folk tale than I do from characters in a novel — and Lagoon is sometimes neither, sometimes both. Characters seen only briefly, early on in the book, come to ends that don't feel earned or necessary, and I found myself wanting more time with them. Ultimately, though, I'm reluctant to consider a proliferation of fascinating, complicated female characters to be any kind of flaw, and Lagoon was certainly full of them.

Chaotic, enthralling, and moving fluidly from character voices to oral-style narration to gut-punchingly beautiful prose, Lagoon is almost less a novel than an experience: Of free-diving, of night-flying, of being cocooned in a spider's web. It's the first novel I've read by Nnedi Okorafor, and it has left me very keen to read more.