Accessibility links
Jesus In A Lowrider: El Rito's Santero Carves Saints In Modern Clothing Nicholas Herrera puts his own touch on the tradition of saint carving. The santero works out of his studio in a small New Mexico town — but his edgy work can be found in museums around the country.

There are two things that have put El Rito on the map. In the little village in northern New Mexico, there's a tiny cafe that serves the best red-chile Frito pie in the world. And then there's the santero — Nicholas Herrera.

"This is where I live," says Herrera. "This is my studio."

As a santero, or saint carver, Herrera continues a tradition of Spanish religious art that goes back to the 1700s in this remote part of the American Southwest. But his works are not relics. He carves edgy, comic, satirical pieces that reflect contemporary realities of the hispanos of the high desert.

Herrera is 51 and still looks like the biker he once was. His black hair falls in a braid down his back; he wears a thick, droopy mustache and a jean jacket.

In his sunbathed studio, he creates art that holds up a mirror to this scenic and socially troubled land. On his table, for instance, is a work in progress. Two police officers standing about a foot high are pointing handguns at a teenager. The teen represents a popular El Rito boy named Victor Villapando, who was shot and killed by the police last summer. He reached for a toy pistol; some say he was suicidal. A grand jury chose not to indict the officer. 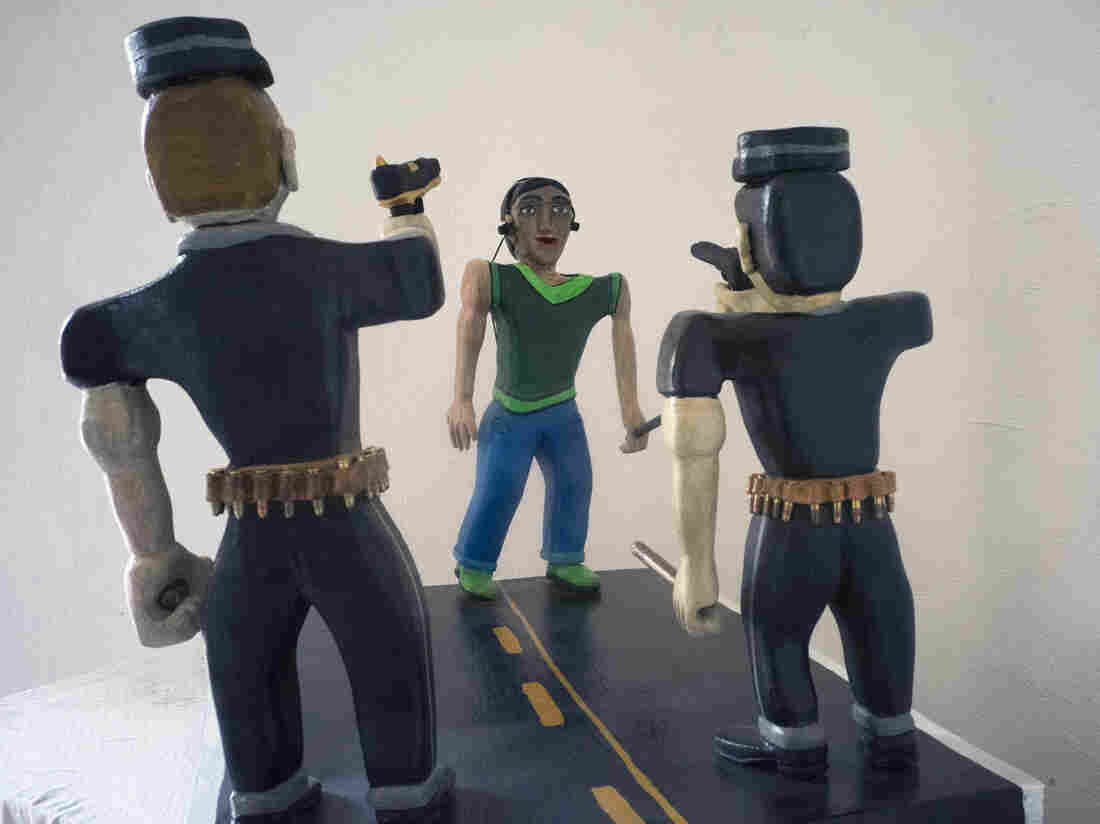 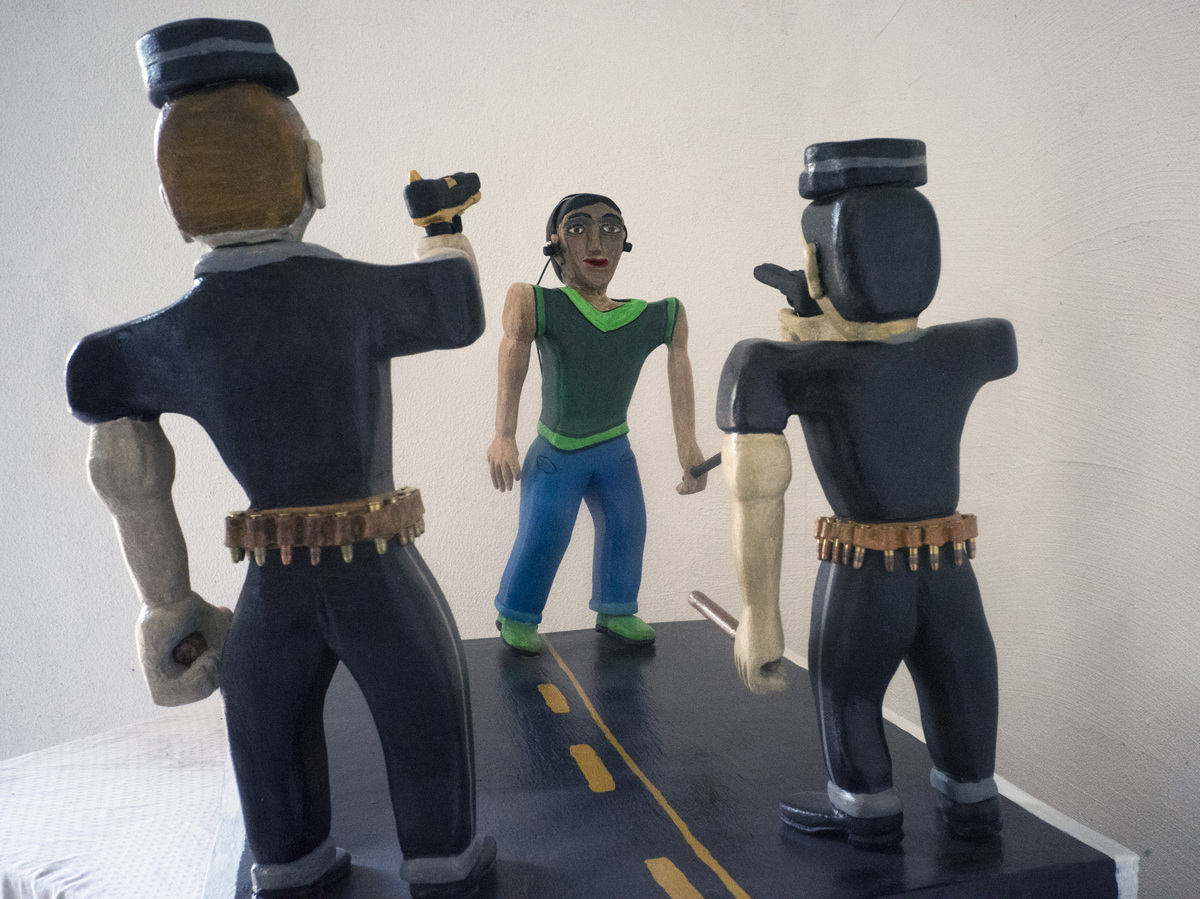 Herrera's latest work in progress represents the police shooting of a local teen.

"I decided to do this piece because I want police officers to think before they shoot, you know, and kids to think about what they're doing, too," Herrera says. "Because it's not a game. These cops are trained to kill you if they have to."

The death of the 16-year-old deeply wounded this village. So it became a subject for Herrera. He imagines that Villapando could have easily been him — in his rogue days, when he drank and doped, rode a Harley-Davidson and got in trouble with the cops.

"All the experiences that I've had from the drugs and drinking, it's in my art now. It's in the Smithsonian, pieces I never dreamed about," he says.

The piece in the Smithsonian American Art Museum depicts Jesus riding in the back of a patrol car — something that happened to Herrera.

"He's like an old hippie, and they're taking him to jail all beat-up," he says.

Herrera's brightly painted carvings incorporate saints, sinners, drug abuse, guns, lowriders and the rich panoply of the symbols of Roman Catholicism. One week, he's carving St. Patrick and the devil, or painting St. Anthony on an altar screen for a church. The next, he's creating a humorous piece that deals with gambling addiction at Indian casinos, or radioactive waste disposal at Los Alamos National Lab, just down the highway.

In a carving called Noah's Truck, the Old Testament patriarch is driving an 18-wheeler with the animals entering and exiting two by two. That one is in the American Folk Art Museum in New York City.

"Nicholas Herrera is a wonderful example of a traditional santero who also incorporates modern-day life into his work and expresses what's going on in the here and now," says Nicolasa Chavez, a curator at the Museum of International Folk Art in Santa Fe, which has 10 of his pieces.

She says that Herrera belongs to a small group of contemporary santeros. "He will draw saints in modern-day clothing; he'll have them riding in a lowrider."

Herrera's deep roots in El Rito are evident during a tour of his property. Across the yard from his workshop, with the snow-topped Sangre de Cristo Mountains in the distance, stands an old adobe house, built by his grandfather in the 1890s. His mother is buried beneath a large crucifix embedded in the stone floor of his home chapel. 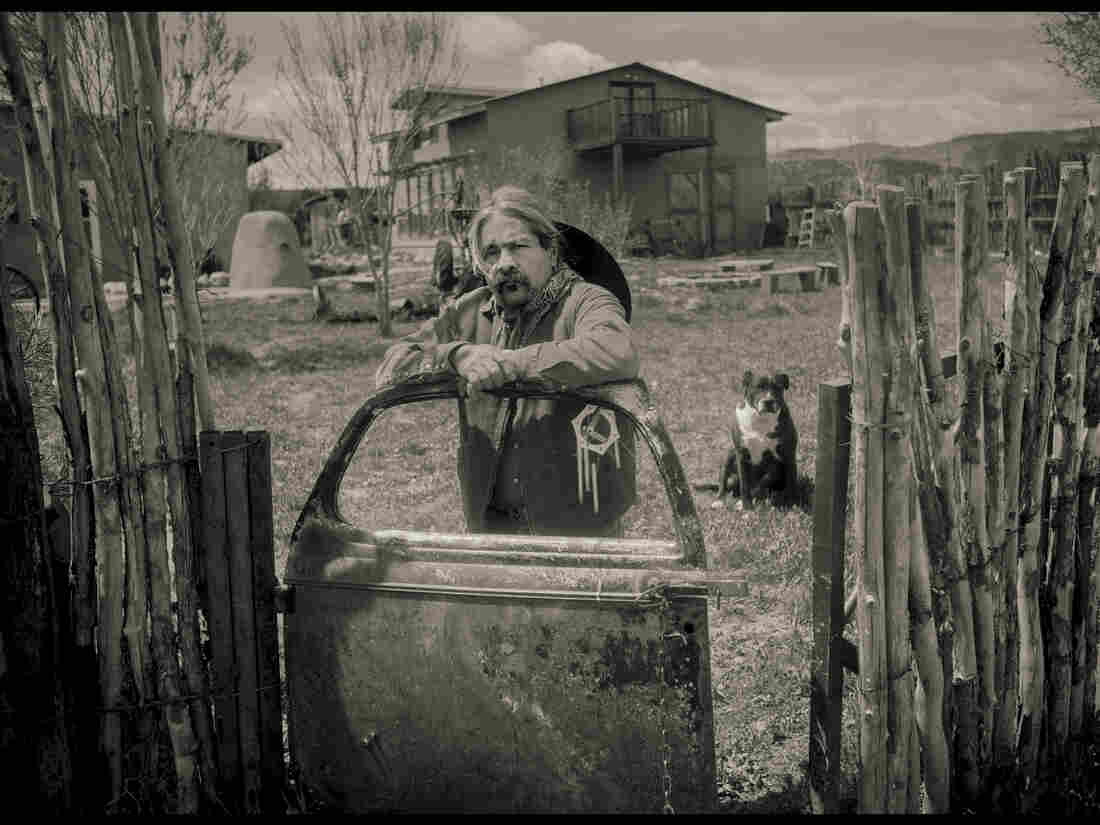 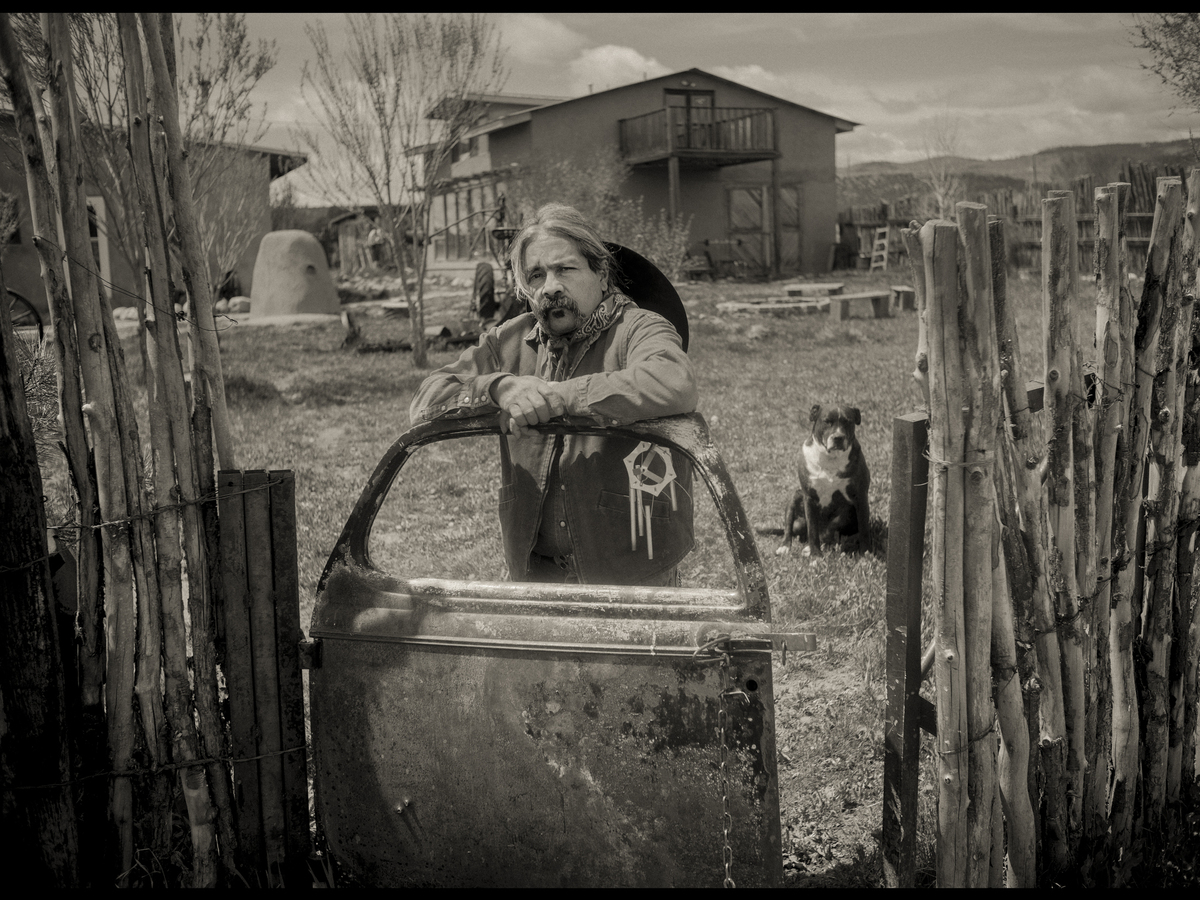 Herrera takes a moment for a photo in front of his home in El Rito. (Photos are courtesy of David Michael Kennedy, another El Rito artist, who was featured on NPR in 2011.)

The de la Cruz Herrera clan has been living in El Rito since the period when New Mexico belonged to Spain two centuries ago. His grandfather was a potato farmer. His father was a janitor at Los Alamos, and a furniture maker. His great uncle, José Inés Herrera, was a renowned carver of death figures.

Nicholas himself is self-taught. He carved toy animals as a kid but never considered it as a vocation. When he graduated from high school, he went to work for the forest service as a firefighter, and later he joined a road crew at Los Alamos.

"It was a head-on collision," Herrera recalls. "There was a truck coming out, and he hit the side [of my car] and that's when it rolled. I was in a Yugo. I almost bled to death that night."

The accident changed Nicholas Herrera. After a near-death experience in the hospital — in which he dreamed he was floating down a river, and his dead relatives were calling to him — he knew what he wanted, what he needed to do.

"I wanted to carve more religious art," he says. "I got more into doing more of the Santo art after that whole accident that happened."

Now, 23 years into his career as a folk artist, his work is in the hands of private collectors and museums all over the country. But he still wonders at the path his life has taken.

"I didn't know I was going to be a santero. You know, you don't plan it; it happened — which is, I guess, is the best way. You know what I mean?" he says. "Because when you plan things, they don't turn out the way you want them."