Accessibility links
PETA Says Undercover SeaWorld Employee Posed As Animal Rights Activist PETA says one of its supporters in California was actually a SeaWorld "agent" who infiltrated its activist network and tried to "incite illegal ... activity." SeaWorld has suspended the employee. 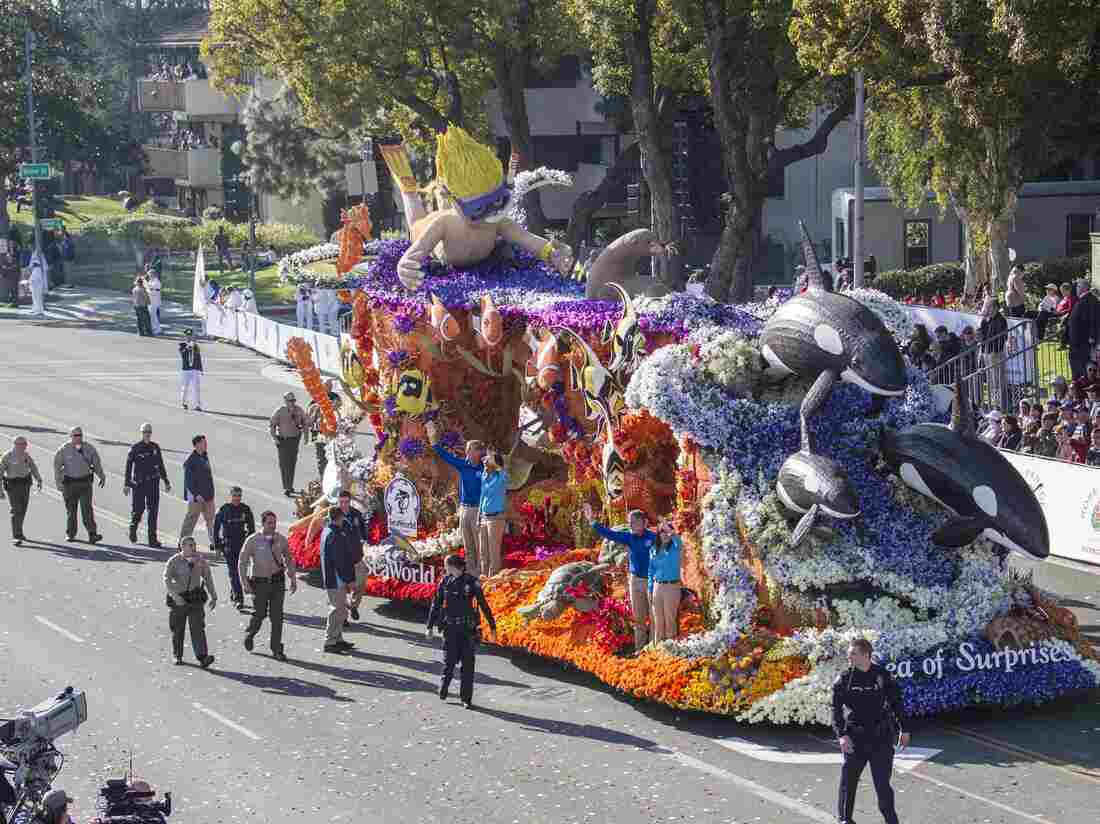 During the 2014 Tournament of Roses Parade, SeaWorld's float was accompanied by police in Pasadena, Calif. PETA supporters were arrested for protesting the float that day, and PETA claims that a SeaWorld employee posing as a PETA volunteer tipped police off to the protest. Ringo H.W. Chiu/AP hide caption 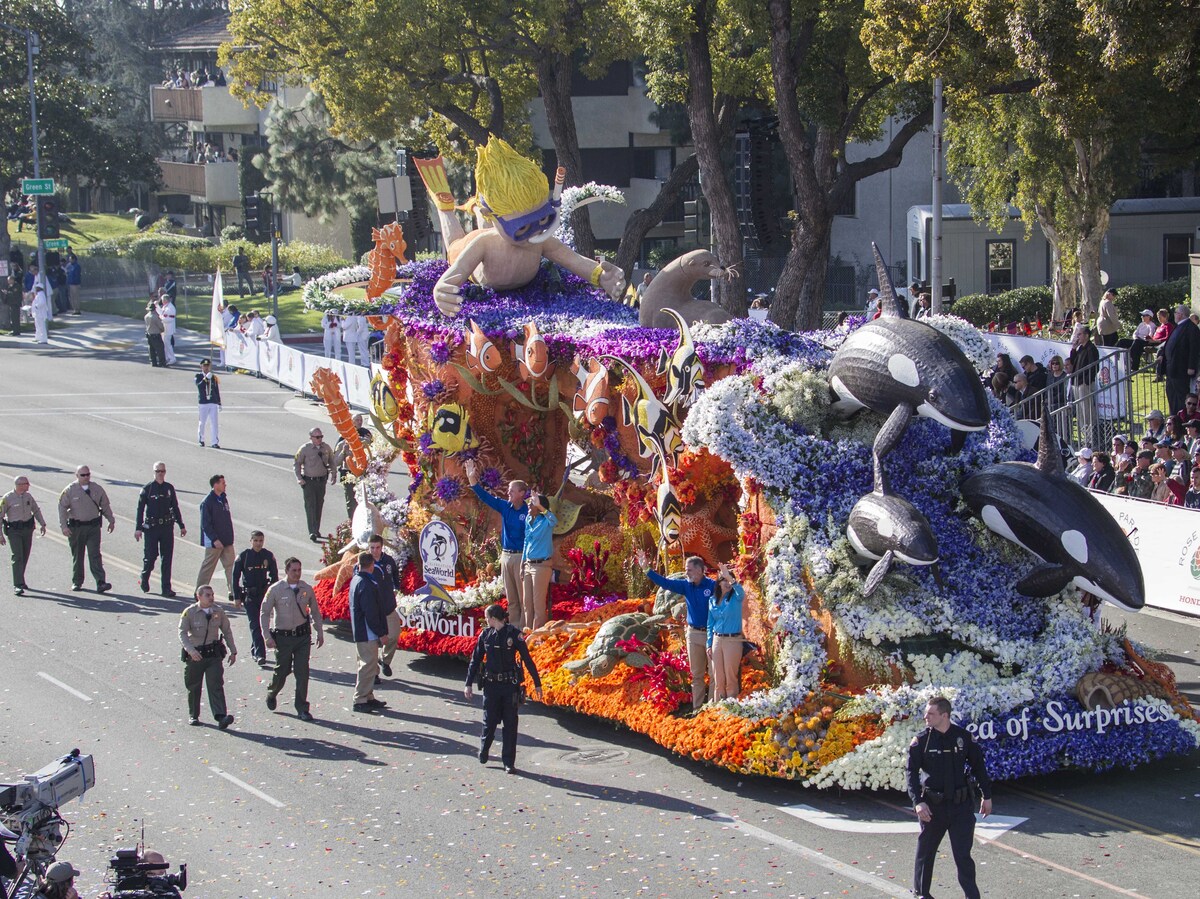 During the 2014 Tournament of Roses Parade, SeaWorld's float was accompanied by police in Pasadena, Calif. PETA supporters were arrested for protesting the float that day, and PETA claims that a SeaWorld employee posing as a PETA volunteer tipped police off to the protest.

In recent years, People for the Ethical Treatment of Animals has waged a protest campaign against SeaWorld, saying that the U.S. theme parks' treatment of trained orcas is cruel. Now, PETA says it has identified a SeaWorld "agent" in its midst.

PETA believes that a California volunteer who went by the name Thomas Jones was actually a SeaWorld employee named Paul McComb. PETA says he joined its network of volunteer activists, infiltrated its planning of SeaWorld protests, alerted police to one protest and tried to incite other PETA volunteers to "illegal actions."

Many volunteers joined PETA after the release of the 2013 documentary Blackfish, which was critical of SeaWorld's treatment of orcas, also known as killer whales. 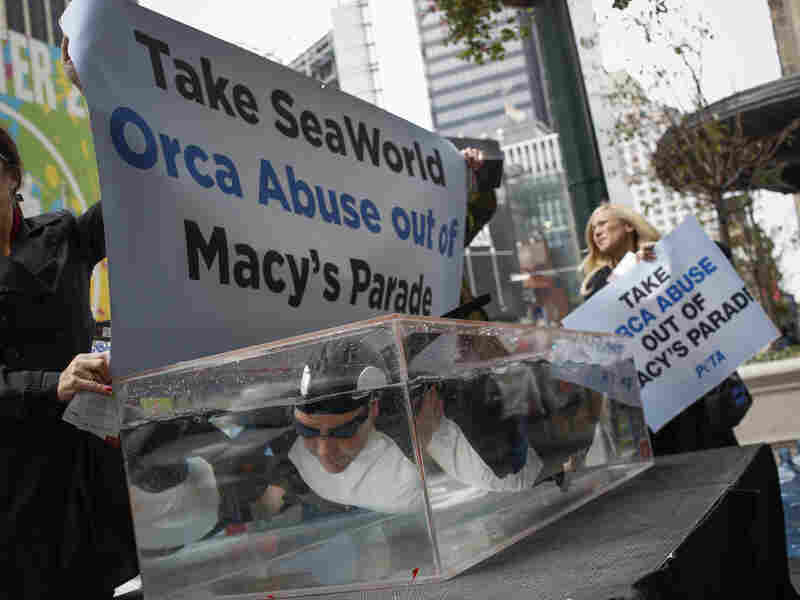 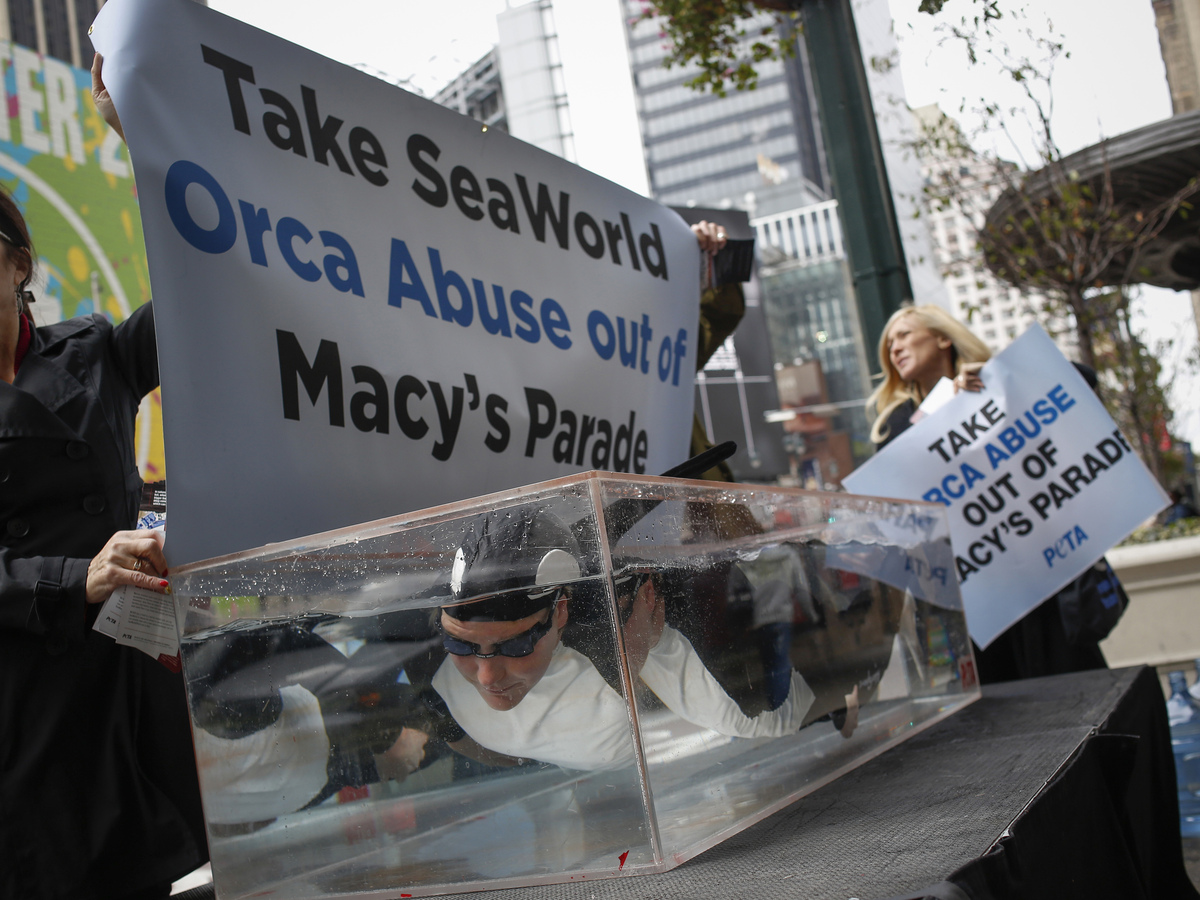 "A lot of people got involved with PETA because they feel very strongly about SeaWorld and wanting to get those [orcas] out of those tanks," says Lisa Lange, PETA's senior vice president of communications.

She became suspicious of Thomas Jones during a PETA protest of SeaWorld's float at last year's Tournament of Roses Parade in Pasadena, Calif. He'd been taken away by police, along with other PETA protesters that day — but failed to reappear after they were released.

"We kept checking ... to make sure we didn't leave anyone behind," Lange recalls. When a concerned colleague got in touch to ask where Jones was, "He said, 'I got out early. ... I forgot my ID, so the police just let me go.' And we were like, that doesn't happen."

Their suspicions aroused, they began to investigate. "We looked at his addresses that he gave us when he signed up for a conference and when he signed up to be on the activist network," Lange says. "And one of the addresses he gave us didn't exist. The other one was a P.O. box that belonged to the director of security for SeaWorld San Diego."

PETA got in touch with Chris Palmeri, an investigative reporter for Bloomberg News, who reported on the story last week. Palmeri scoured Jones' social media accounts.

"In hindsight," Palmeri says, "you can see so many obvious clues that [Jones] was really prodding for information from these people. And he was also goading them into more action."

Lange notes that on social media, Jones "would say things like, 'Everybody grab your torches and your pitchforks — we're gonna go protest SeaWorld!' or 'Who's gonna help me drain the tanks?' "

This was unusual behavior for a PETA supporter, Lange emphasizes. "We watched him trying to incite illegal — and frankly, violent — activity."

"You go to his Facebook page," Lange says. "Most people, even if they're activists for a certain cause, they may have posts about, in his case, SeaWorld, but they'll also say, 'Look! Here's the bagel I had for breakfast!' You know, that's social media. He had nothing on his Facebook page except for SeaWorld this, SeaWorld that. 'Look at me at SeaWorld!' "

Using a private investigator, PETA tracked Jones' license plate number "to an entirely different individual than the name they had," Palmeri says.

The vehicle belonged to someone named Paul McComb, a SeaWorld employee.

Palmeri kept digging: "I was able to see photographs of Paul McComb on his wife's Facebook page, which has since been taken down, and I showed those photographs to three other people who had met him personally over the years. And they confirmed to me that this was the same guy — Tom Jones, the activist that they knew."

SeaWorld declined to make anyone available for this story, and NPR was unable to reach McComb for comment.

In a statement released on July 15, CEO Joel Manby said, "These allegations, if true, are not consistent with the values of the SeaWorld organization and will not be tolerated. The SeaWorld Board of Directors and I have initiated an investigation into this matter. ... In addition, we have placed the employee in question on paid administrative leave pending the findings of the investigation."

SeaWorld has pointed out that PETA runs undercover operations of its own. But Lange says there are differences between McComb's actions and what PETA does.

"A lot of our investigations come from whistleblower calls," she says. " 'Animals are being abused illegally here every day, and I can't get anything done about it. Can you help?' And because of our investigations, we've been able to get cruelty-to-animals charges against people. We always take our findings and report it to the authorities. And that's the difference here."

Lange says PETA is considering its legal options. For now, the organization has filed a lawsuit against the Pasadena police, seeking records of the arrests made during the 2014 Pasadena parade protest.