Accessibility links
'Driving Straight,' Giving Back: Rebuilding A Life After Prison As President Obama pushes to overhaul the criminal justice system, three former inmates share what it's like to strive for success on the outside — and what it takes to leave an old life behind. 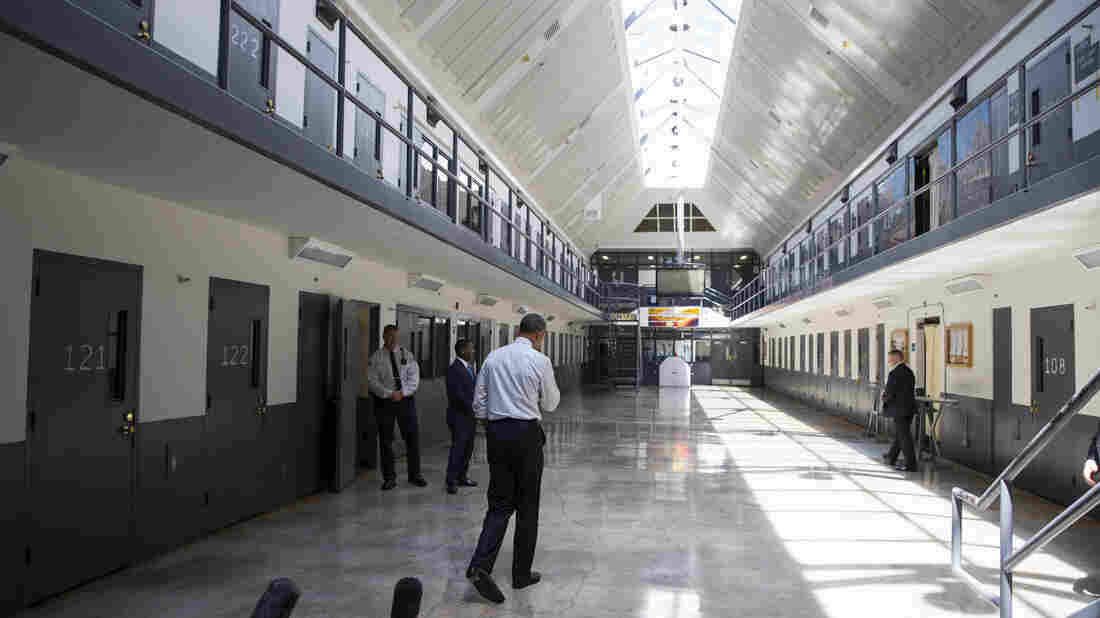 President Obama visited the El Reno Federal Correctional Institution in El Reno, Okla., on Thursday as part of a weeklong focus on inequities in the criminal justice system. While there, he met with non-violent drug offenders. Evan Vucci/AP hide caption 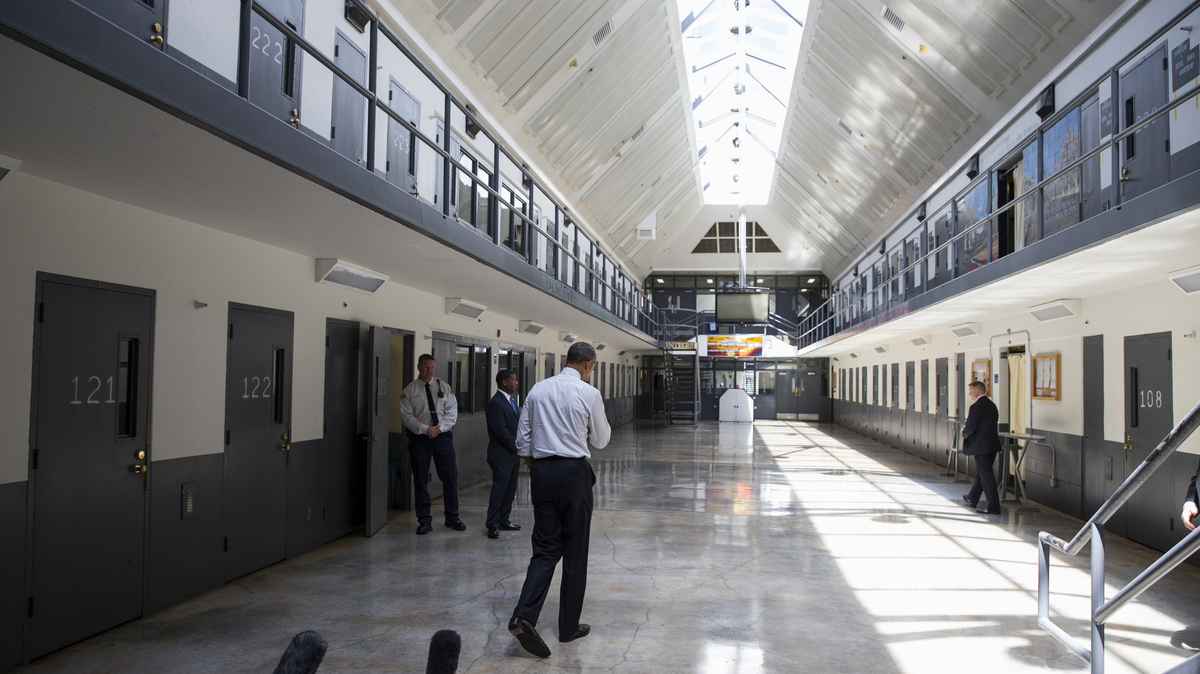 President Obama visited the El Reno Federal Correctional Institution in El Reno, Okla., on Thursday as part of a weeklong focus on inequities in the criminal justice system. While there, he met with non-violent drug offenders.

In a speech last week, President Obama made a case for overhauling the criminal justice system.

"Mass incarceration makes our country worse off, and we need to do something about it," he said.

Obama Visits Federal Prison, A First For A Sitting President

Then he took his message to the people his proposals could affect most. On Thursday, he met with six inmates at the Federal Correctional Institution in El Reno, Okla. — all convicted of nonviolent drug offenses — and became the first sitting president to ever visit a federal prison.

Earlier he commuted the sentences of 46 criminals with nonviolent drug charges. Those people will eventually be released, with a chance to rebuild their lives.

This week on For the Record: Life after prison. We speak with three people who are starting over after incarceration.

When Taitt was growing up, he felt like he had two options: He could be book smart or he could be street smart. He chose the dangerous path and ended up in prison, serving 10 years for robbery.

When he got out, Taitt took the other path: taking classes at John Jay College in New York.

"I'm studying English," he says. "I'm a English major and I'm in my second year."

He remembers how he felt the day he left prison.

"It was just so refreshing to know that I'm driving straight, and when I look back, I can say that was then and this is now," he says.

Whitt has been in prison twice, most recently for 26 months on burglary and theft charges. She spent her first months of freedom at a shelter because she couldn't go back to her family. 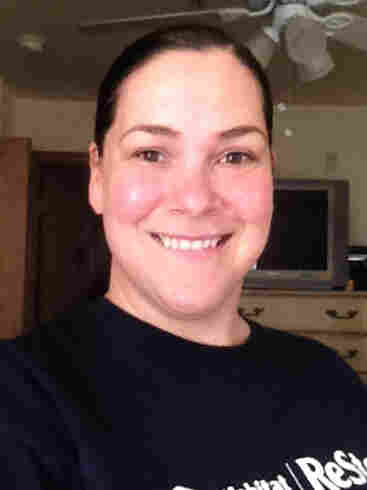 Jacqueline Whitt says in order to turn her life around and get her kids back, she couldn't return to her old life with her family. Courtesy Jacqueline Whitt hide caption 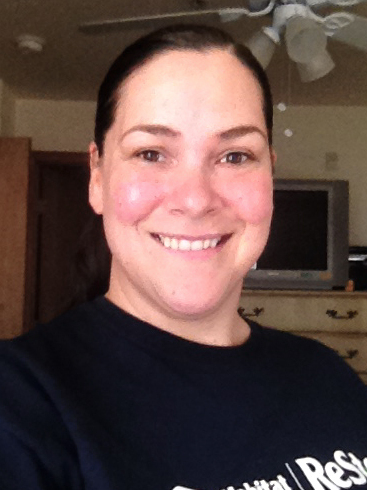 Jacqueline Whitt says in order to turn her life around and get her kids back, she couldn't return to her old life with her family.

Whitt focused on getting her kids back.

"All the steps that I took, and the programs that I got engaged in, was directed at getting me a place so I could get my kids back, and I did that within four months," she says.

For both Whitt and Taitt to move on, they had to reject almost everything about the life they led before prison.

"There have been a lot of times when I've been tempted to return back to my old behaviors — maybe because I'm not able to pay all of my bills, or I feel unsupported or I feel lonely, maybe even boredom ... " she says. "However, I learned how to play the tape through and to not act impulsively. It feels like such a blessing that I've developed a skill not to act on those feelings."

Hernandez was convicted of conspiracy to distribute controlled substances and other charges related to crack cocaine. He served almost 17 years in a number of prisons, including the correctional facility Obama visited last week.

He remembers one day in particular.

"It was Dec. 19, 2013," he says. "The warden came in and said, 'Are you Jason Hernandez? and I said, 'Yes, sir.' He goes, 'Well, I got an executive order right here from the president of the United States, Barack Obama, commuting your sentence from life without parole to 20 years.' And I just started crying right there and then." 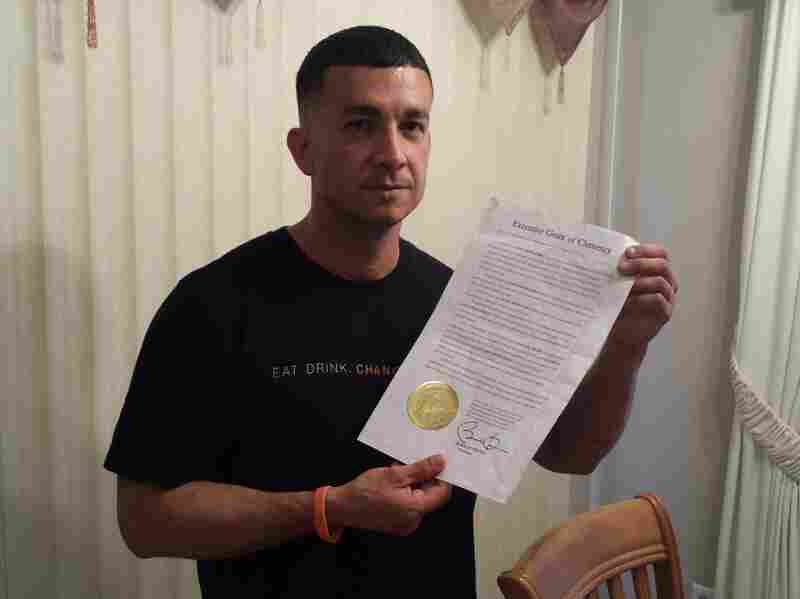 Jason Hernandez holds the piece of paper that changed his life -- the letter from President Obama commuting his sentence. Stephanie Kuo For NPR hide caption 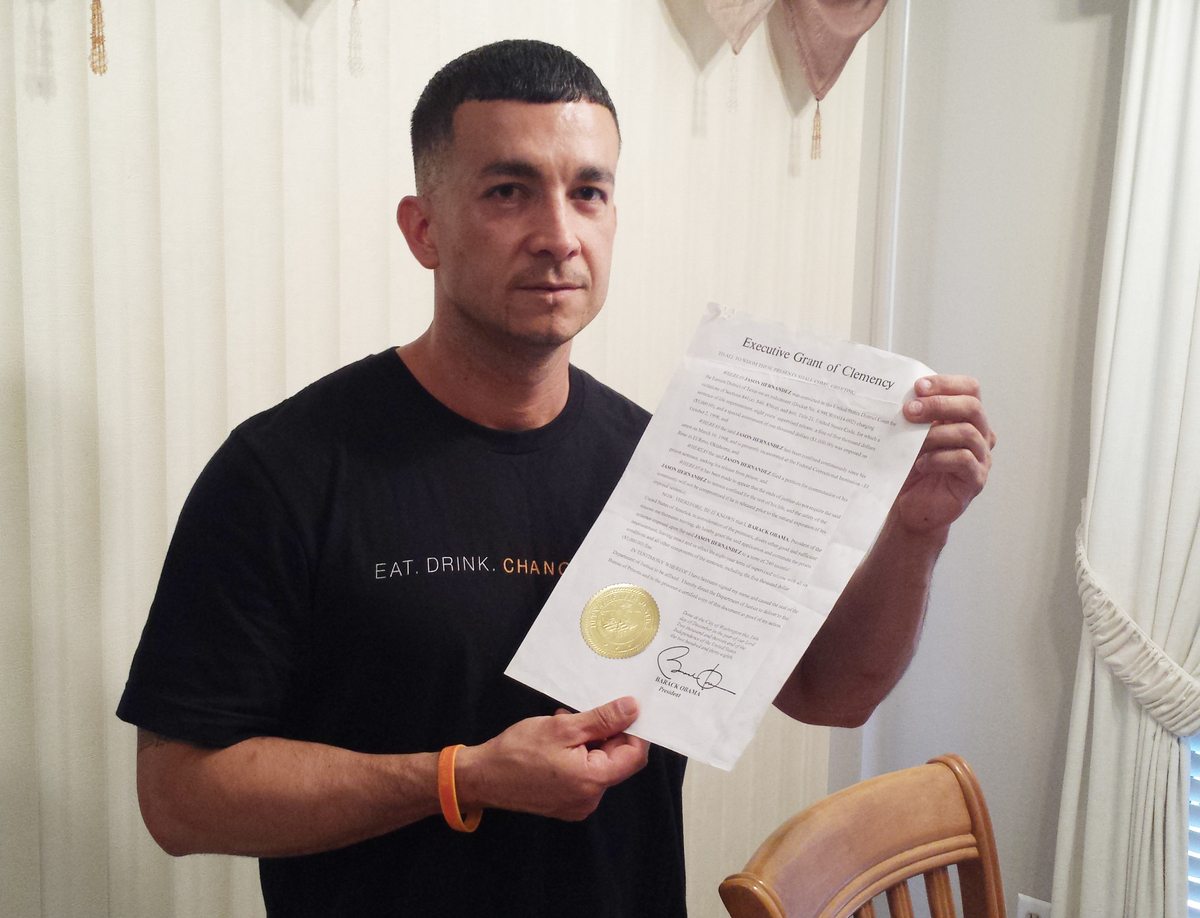 Jason Hernandez holds the piece of paper that changed his life -- the letter from President Obama commuting his sentence.

He still has that letter.

"It's kind of torn. It's wrinkly, it's creased, has grease on it, and that's because I held it in my hand for almost two days," he says. "I slept with it, I took it everywhere, because I just thought that if I had let go of it, that, you know, it wouldn't be real anymore."

Hernandez lives at his parents' house, where he's under house arrest until Aug. 11.

He knows he's lucky: He expected to die in prison. Now he works at a restaurant called Cafe Momentum, where he mentors young people who've been in juvenile detention. But at first, he faced plenty of rejection from potential employers.

"They would say, 'Well, there has to be something you're not telling me about your charge because nobody gets that much time for drugs," he says. "So I ended up taking my petition that the president gave me. I would take it to job interviews."

Hernandez wants to keep working with kids who've had a rough start. Eventually he'd like to start his own organization.

"My whole goal is to work on that promise that I made to Obama, and fulfill it," he says. "I kind of see him like a father, and just like any son, I want to make him proud."

First, it's striking how much these three former prisoners relied on social services to transition to life after prison. Whether it was paying for them to stay in some kind of transitional facility or linking them with job and educational services, or in Jackie's case, mental health services, they all seem to have navigated the transition because they had a lot of help.

Second, each one has a different idea of what success looks like. For Taitt, it's about getting an education that he believes will open up professional doors. For Whitt, it's about being a better parent than she's been in the past. And for Hernandez, success means shifting his focus to others.

Finally, although all are committed to creating a new life, it's still clear that everything could go off the rails if they make one bad choice. The way Whitt talked about this was most telling, using words and phrases that could just as easily have come from a therapist or social worker. But it's what she has to tell herself to keep holding everything together.