Accessibility links
Turkish TV Travels Far As Craze For Dramas Goes Global The Turkish television industry is booming. Audience numbers spike at the end of Ramadan, when viewers around the world tune in in massive numbers — but there's year-round enthusiasm, too. 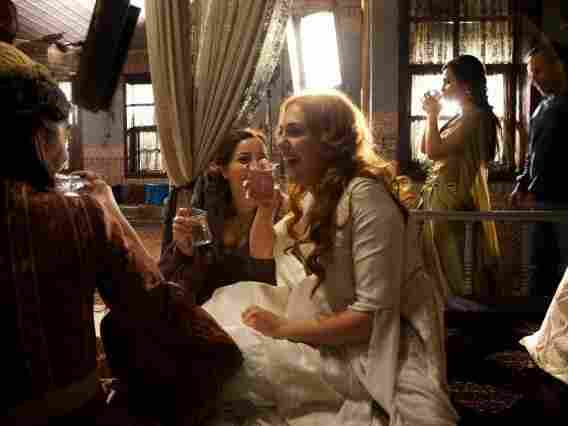 Actress Meryem Uzerli takes a break with colleagues on the set of Magnificent Century in Istanbul. The craze for Turkish TV dramas has spread to the Middle East and to Latin America, where telenovelas rule. Ed Kashi/VII/Corbis hide caption 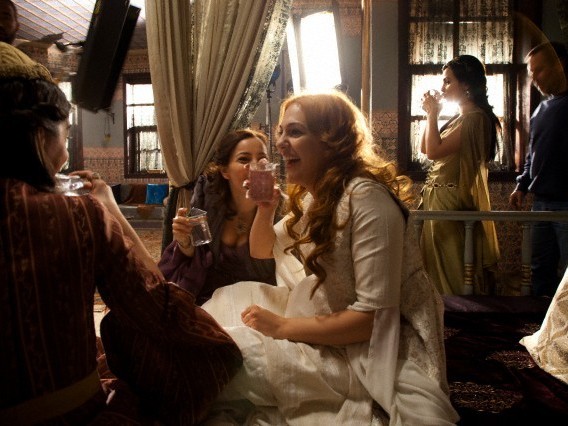 Actress Meryem Uzerli takes a break with colleagues on the set of Magnificent Century in Istanbul. The craze for Turkish TV dramas has spread to the Middle East and to Latin America, where telenovelas rule.

The Turkish television industry is booming.

During Ramadan, which ended this week, many Muslims — around the world — tuned in to watch Turkish TV in massive numbers.

But Turkey isn't just presenting religious programming. The country is second only to the U.S. in producing and exporting secular TV dramas — and they're becoming global hits

A 'Captive Audience' During Ramadan

Many families watch as they gather as they wait to break their Ramadan fast after sundown, says Pinar Tremblay, a columnist for the online newspaper Al-Monitor.com.

"During sunset, everybody sits around the dinner table waiting," Tremblay says. "Everybody turns on the television. It is the captive audience. Ratings go up — the ratings are very high during Ramadan."

"Some of them turn it into a sort of Jerry Springer, in a different way," she says, referring to the U.S. tabloid talk show. "People ask questions like, 'Oh, I slept with my brother-in-law; what do I need to do now?' 'If I chew gum, would my fast be affected?' "

Cooking shows, music programs and kids' shows are also popular. But throughout the year, it's the secular Turkish dramas that stand out.

Among this summer's hits: a soap opera about a forbidden love, and a drama depicting the founding of the Ottoman Empire.

The boom began about 10 years ago, when Turkish studios began making dramas with high production values, says Selin Arat, director of international operations at Tims Productions, which makes some of Turkey's most successful TV series.

"Here, your show can get cancelled after three or four episodes if it's not getting the ratings that it's supposed to get, so it's very competitive," Arat says.

"Now, Turkey is now the second [biggest] exporter of TV series in the world, after the U.S., so that's a big deal," she says. "Being able to sell to 60 or 70 countries is a huge success."

The Turkish dramas are popular throughout the Middle East, says Iranian-American businesswoman Goli Ameri, who has served as a diplomat.

"Because they show that you can be Muslim, but at the same time modern — and you know, Turks basically look like everyone," Ameri says.

Ameri points to one recent Turkish series that captivated viewers on both sides of the Gaza Strip.

"At 3 or 4 p.m., when the series was running, the fighting would stop and people would watch the series," she says. "It had that kind of an impact."

The craze for Turkish TV dramas has also spread to Latin America, where telenovelas rule.

In the U.S., they've proved extremely popular on Mundo Fox, which is airing the highly rated series Magnificent Century, which is also set during the Ottoman Empire.

The big-budget series, with lavish costumes and sets, was compared to HBO's Game of Thrones series. It was sold from Tims Productions to 60 countries and boasted more than 200 million viewers. The series was directed by Durul Taylan and his brother Yagmur, who've been described as the Turkish Coen Brothers.

"The writer of the show, Meral Okay, told the story totally from the perspective of the slaves," says Yagmur Taylan.

Now the Taylan brothers, who split their time between Istanbul and Malibu, are working on a feature film in the U.S. — and a television drama about Turkey's TV industry.