Accessibility links
Once Immune To Cord-Cutting, 'King Of Live Sports' Finds Throne Shaken Even as other channels tried to adapt to a new TV landscape, ESPN seemed to be impervious for one reason: People want to watch sports live. But ESPN has shed 3.2 million subscribers since May 2014. 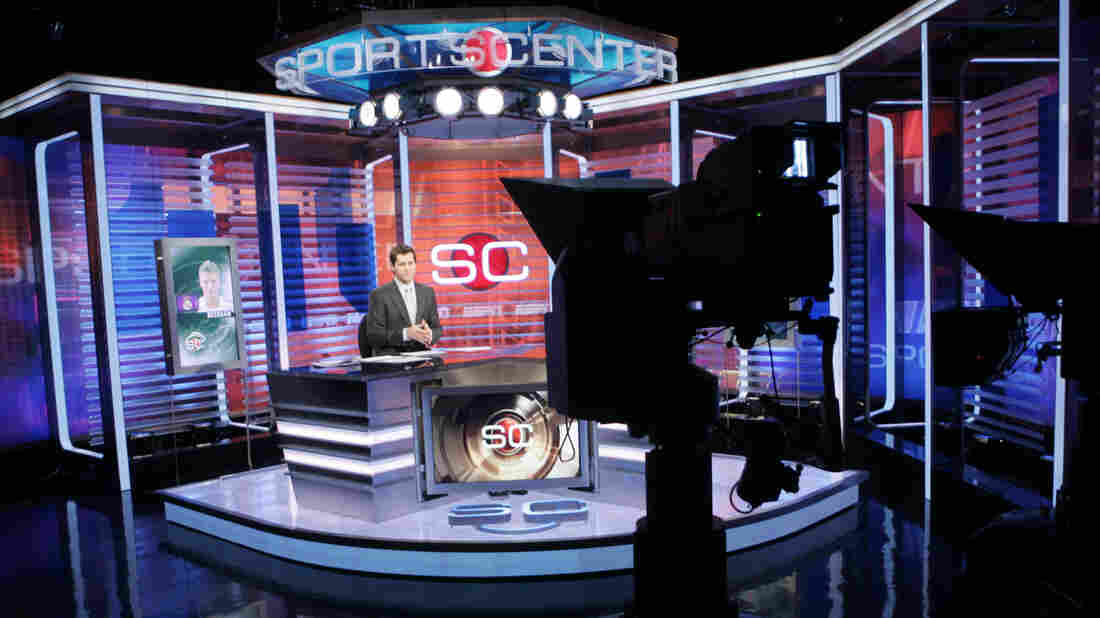 Ryan Phelan rehearses on the set of SportsCenter at ESPN's headquarters in Bristol, Conn., in 2007. Years ago, the network had been thought impervious to the seismic shifts shaking the cable landscape. Now, that appears to be changing. Bob Child/AP hide caption 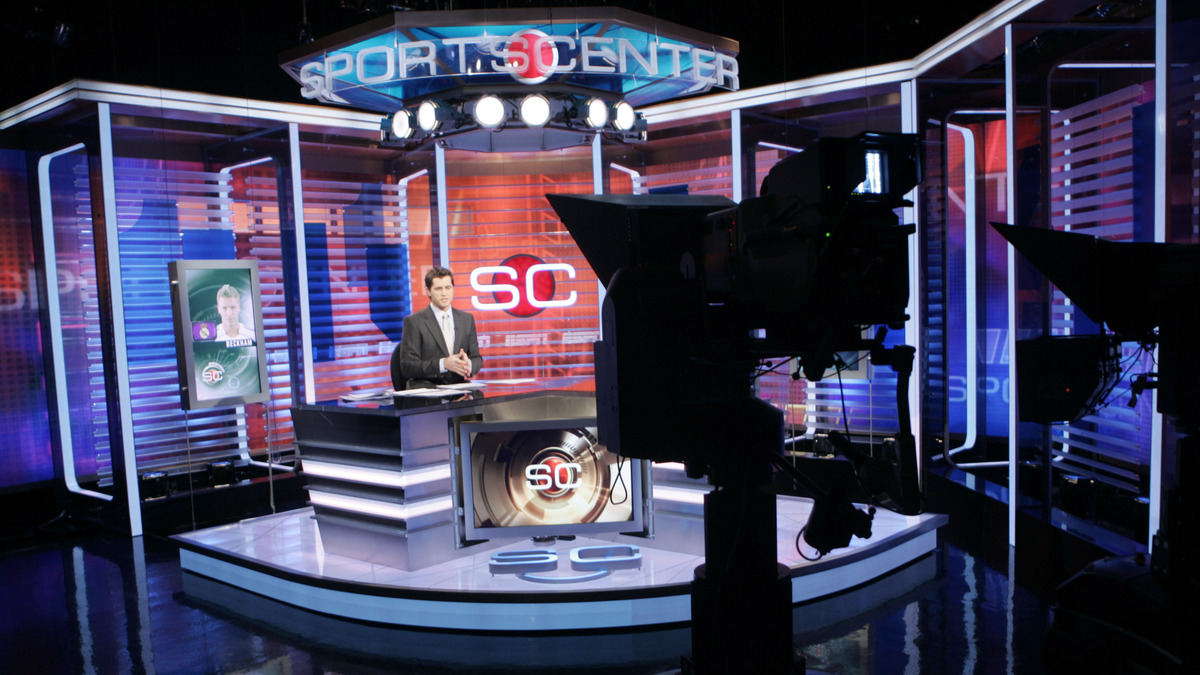 Ryan Phelan rehearses on the set of SportsCenter at ESPN's headquarters in Bristol, Conn., in 2007. Years ago, the network had been thought impervious to the seismic shifts shaking the cable landscape. Now, that appears to be changing.

It's no secret that cable television is in trouble. With Hulu, Netflix and many networks streaming their shows online, viewers don't have to watch shows like Scandal or American Horror Story live. They can stream it the next day — or the next year.

Nevertheless, one channel had long looked impervious to the trouble: ESPN. Even as other channels suffered losses in subscriptions, the sports network was sitting pretty for one simple reason: People want to watch sports live.

"You're not going to wait two years to watch your football game," says Shalini Ramachandran, who reports on the cable industry for The Wall Street Journal. "That's what's been holding together this idea of, 'All right, I'm going to pay for this bundle of 500 live channels, because I want to watch live sports the day it happens.' "

But now, she says, even ESPN — the king of live sports — is showing the signs of pressure. ESPN has lost 7 percent of its subscription base since its peak of about 100 million homes in 2011. And the trend is accelerating: 3.2 million subscribers have left since May 2014.

Left and right, people are downsizing on their cable packages. Ramachandran says one CEO described it as hundreds of thousands of "paper cuts" to the industry. Networks and providers alike are scrambling to figure out why these people are leaving, and whether there's any money still to be made from them.

Evaluating Whether It's Time To Cut The Cord

Evaluating Whether It's Time To Cut The Cord

I called a few of these former customers to find out for myself. One common theme: money.

"Ninety bucks wasn't an expense that I could afford," says Jon Duarte, an information technology professional in San Antonio, Texas. He's a sports fan but he's from California originally, which means he runs into a frustration felt by many with the traditional sports broadcasting model.

"If the [San Antonio] Spurs played the [Los Angeles] Lakers, I got to watch the Lakers," he said. Otherwise, even ESPN wasn't a sure bet. "Cutting the cord and finding alternate sources gave me the ability to watch the Lakers, the Angels and the 49ers."

The choice is even easier if you don't like sports, like Benjamin Klahn in Joliet, Ill. He realized he was paying hundreds of dollars a year to watch reruns and the Discovery Channel, as he puts it.

"I'd seen a number of articles over the years about how much ESPN charges for the cable operators," he says. "So, looking at my bill of $50 to $60 a month, [I was] paying a huge amount to ESPN, and I don't even like it."

For decades, the TV industry has been dominated by the bundle model: Consumers pay anywhere from $50 to over $100 a month for hundreds or thousands of channels, no matter which ones they actually watch.

Now that millions of people are deciding to abandon those packages, companies are trying to figure out how to retain customers.

For their part, cable providers have started selling what they call "skinny packages." Fewer channels are included, usually little more than networks that could otherwise be had for free with an antenna. ESPN is not typically included. (The network is included in Dish Network's lower-cost streaming TV service called Sling — but Sling's subscribers don't count toward ESPN's total subscriber figure.)

The sports leagues have also started offering their product straight to consumers. The NBA, the NHL and the MLB each already offer their own standalone streaming services. The NFL could be headed this way, too. In June, it announced a deal with Yahoo to broadcast a game only online for the first time.

But none of this helps ESPN, which still has to pay huge fees for the right to broadcast these live sports in the first place. Just last fall, the NBA struck a new deal with ESPN. The price ESPN pays the league per season jumped from $485 million to $1.47 billion.

The result is that ESPN is tightening its belt. But because of the nature of the network, that will prove a challenge.

"Because a lot of their costs are things that are really hugely valuable and make ESPN what it is — which is rights contracts with the NBA, the NFL, these big leagues — they can't really cut there," Ramachandran explains.

While ESPN has retained contracts with many of these leagues, big-name commentators and hosts like Bill Simmons, Keith Olbermann and Colin Cowherd have left the network in the past few months (though salary disputes haven't been among public reasons for the departures).

What should worry ESPN, Ramachandran says, is that sports fans are notoriously tech-savvy and willing to embrace something new — which is what originally helped launch ESPN into the giant it is today.