Accessibility links
For The Rubik's Cube World Champ, 6 Seconds Is Plenty Of Time Competition was fierce at the Rubik's Cube world championship in Brazil. There was a 4-year-old and a category for those who do it with their feet. The overall winner needed less than 6 seconds. 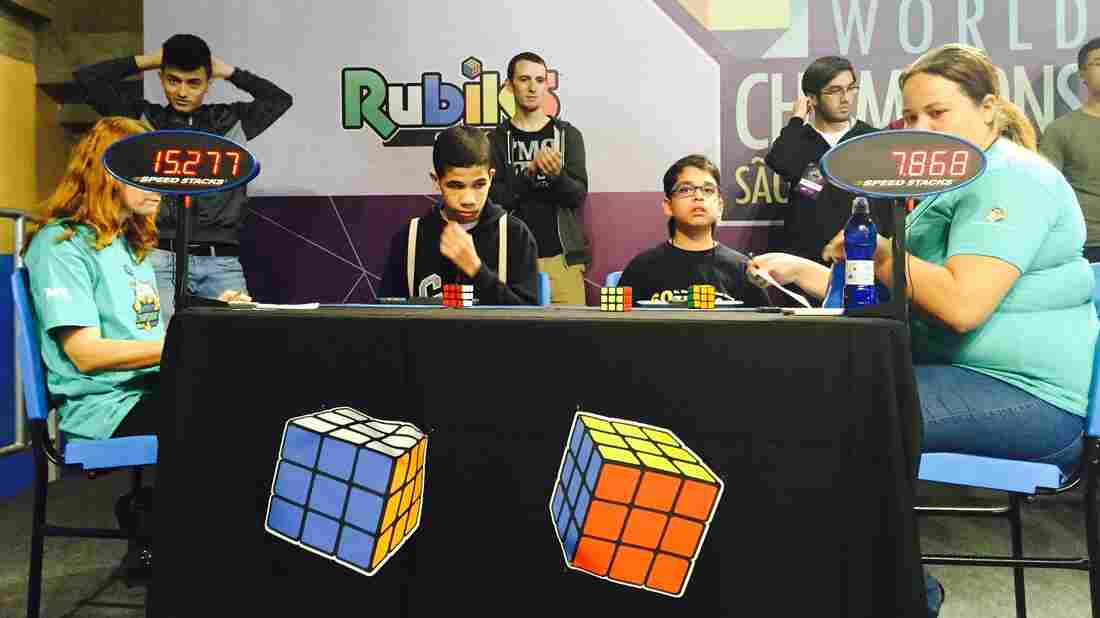 The Rubik's Cube world championships were held in Sao Paulo, Brazil, over the weekend, drawing participants from more than 40 countries. The winner completed his cube in 5.69 seconds. Lourdes Garcia-Navarro/NPR hide caption 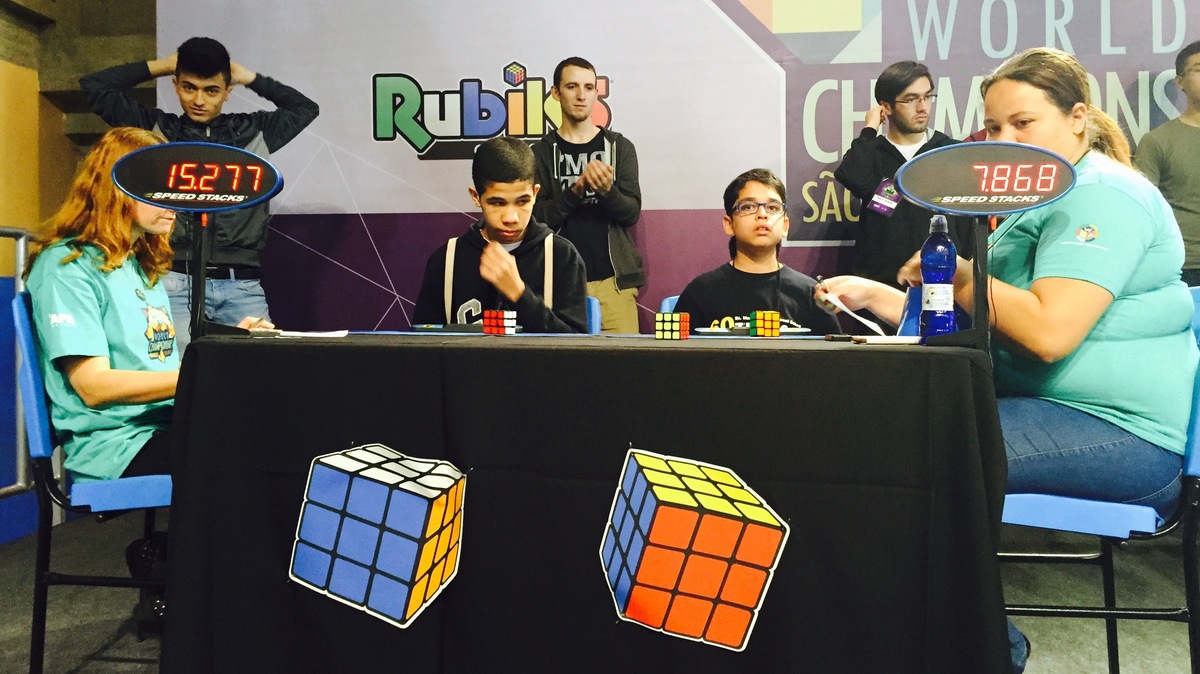 The Rubik's Cube world championships were held in Sao Paulo, Brazil, over the weekend, drawing participants from more than 40 countries. The winner completed his cube in 5.69 seconds.

Brazil hosted the World Cup last year. Next year, it will host the Summer Olympics. On Sunday, though, the country played host to another international gathering of talented competitors: the Rubik's Cube World Championship.

This past weekend, hundreds of "speedcubers," as they're known, descended on Sao Paulo from over 40 countries, to take part in three days of intensive competition.

Before meeting the speedcubers, though, a word on just what, exactly, speedcubing entails: Let's start with the Rubik's Cube. 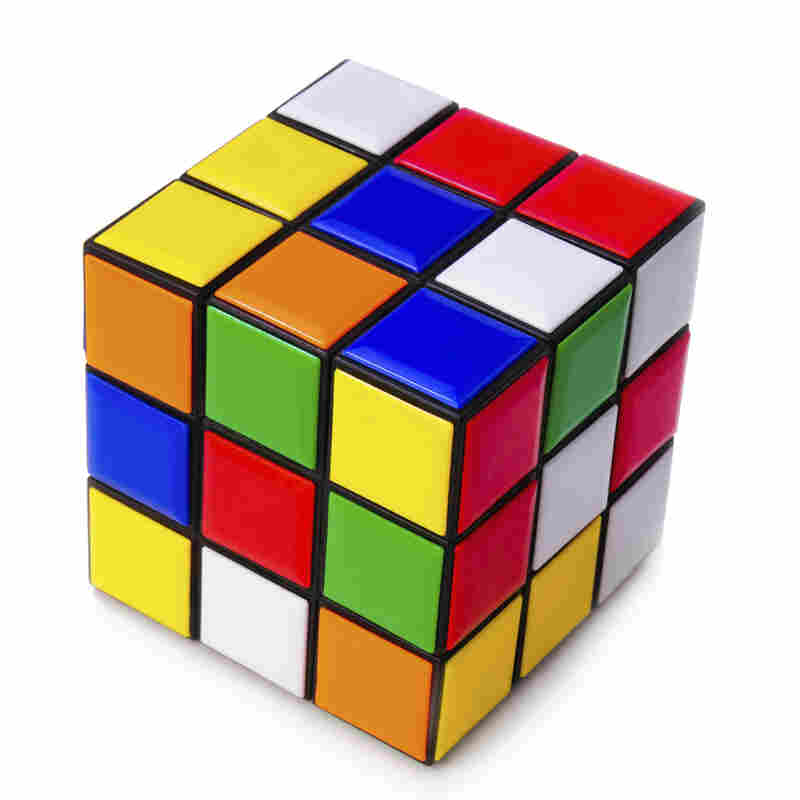 The Rubik's Cube, the boxy beast to be tamed by our intrepid competitors. serts/iStockphoto hide caption 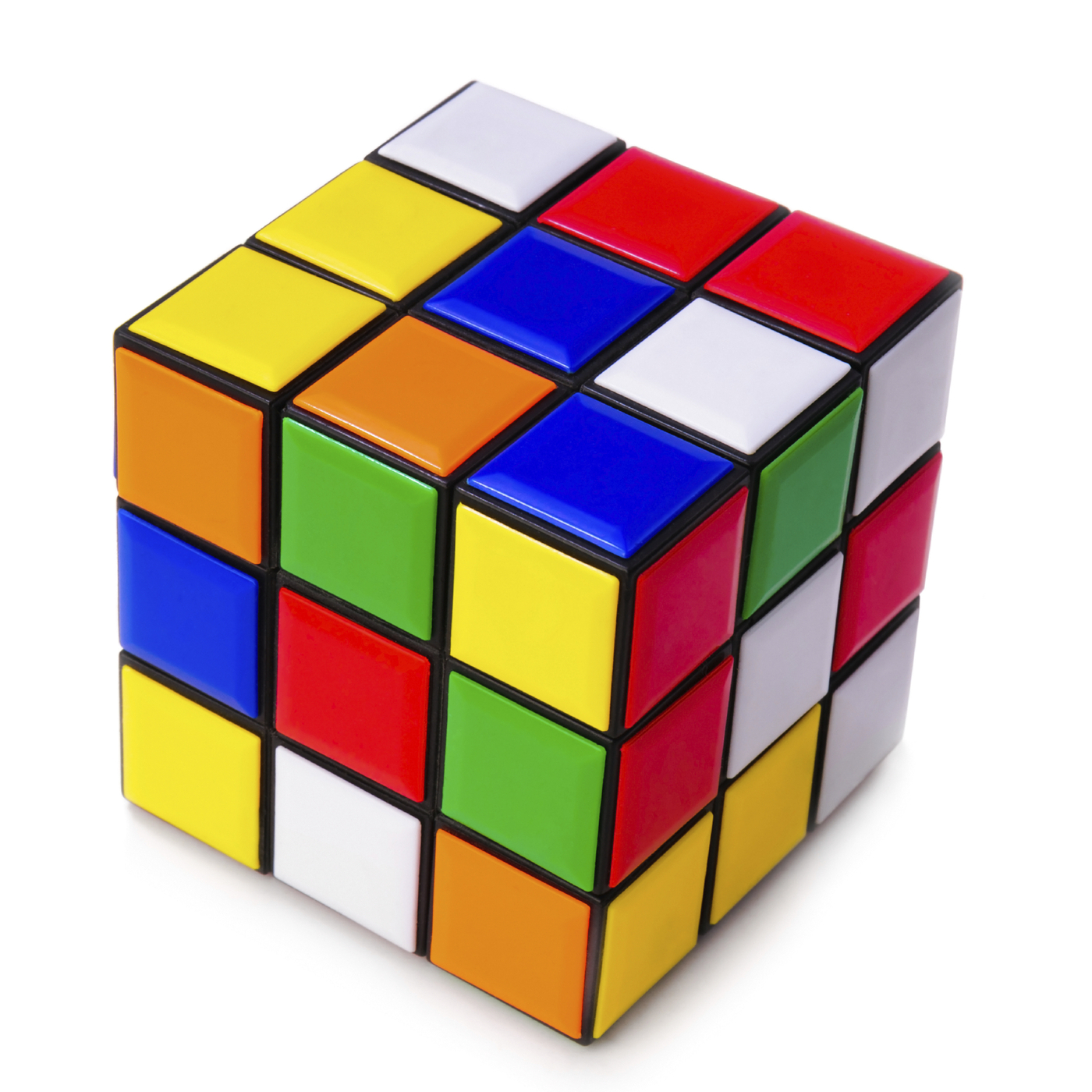 The Rubik's Cube, the boxy beast to be tamed by our intrepid competitors.

"The world's best-selling toy," as it is billed, the cube was invented in 1974 by Hungarian architect Ernő Rubik and became ubiquitous in the 1980s.

To solve the cube, one must arrange its tiny squares in such a way as to make each of its faces in a single, solid color — and to win at speedcubing, you've got to do it fast.

These days there are loads of different categories one can compete in.

The 3x3 category, the gold standard of speedcubing, uses a cube with nine squares to a side. But there are also categories with bigger cubes and pyramid cubes; competitors can cube one-handed, blindfolded or even with their feet. And, yes: All of the above are official competitions.

The best of the best in speedcubing were in attendance.

There was Yani Chan, for example. She's 4 years old and holds the world record for the youngest person to take part in an official competition. When she isn't cubing, she's got a toy bunny in her hand. She can't really speak clearly yet, so interviews proved difficult — but when she handles a Rubik's Cube, her little hands fly.

This is 4 year old Yani Chan completing the Rubik's Cube at the World Championship yesterday. Filming her was completely humbling and amazing. She couldn't speak much yet and she had a toy bunny in her hand when not playing with the cube. She's also the youngest person to have ever officially competed in a competition. But look at those hands fly! This is my story https://www.npr.org/2015/07/20/424465069/for-the-rubiks-cube-world-champ-six-seconds-is-plenty-of-time?live=1

Then there was Kevin Hays. He's an American college student, and currently an official world champion. He holds the impressive distinction of having solved the most Rubik's cubes underwater — in one breath.

He's 21 years old, an age considered mature in the sport.

"I think the ideal age is between 16 and 23, I guess," Hays says. "I started when I was 14. It's really easy to get into, as everyone knows the Rubik's Cube, and it's a really cool thing. And if you want to solve it faster, it's even cooler."

But you don't just have to be handy to move fast with the Rubik's Cube. Jakub Kipa solved one with his feet — in just 20.57 seconds. The young Polish man is the current world record holder in that category.

I asked him to give me a demonstration in person, but he demurred. After a sweaty day at the competition, he warned that a show-and-tell wouldn't be pleasant. Apparently, this is an occupational hazard. I concurred.

Of Women And Cubes

For the most part, this is a boy's sport. There were not a lot of women speedcubing at the championship, and there aren't many worldwide.

Londoner Daniel Sheppard, 26, has a theory on the lack of female interest.

"Women tend to be less competitive about something like this, which almost seems like a pointless activity [to them], I think," he muses. "A lot of people ask me, 'Why do you do this all day? It is so pointless trying to get faster and faster!' And most women tend to feel that way, maybe."

But in the case of his own girlfriend, Thaynara Santana, 19, the theory doesn't quite hold. The Brazilian law student is also a speedcuber. In their case, competitive speedcubing led to love.

"I'm just really lucky I found a girl, really, because really there is not many around," he quips.

Some have argued that this relative lack of female competitors is a sign that there ought to be a category for women alone, separate from the men. But Santana disagrees.

"I feel like everyone should be treated the same. Both genders can do this."

Hail To The Victor

Lore has it that Ernő Rubik needed a month to solve his own invention, while 4-year-old Yani Chan took about 30 seconds to complete it in front of me.

On Sunday, Feliks Zemdegs, who is considered the fastest speedcuber on the planet, won the day after clocking 5.69 seconds in the final.

During the final, I sat next to Zemdegs' mom, Rita. She confessed that her son is so swarmed with people trying to take pictures with him, he can barely get a moment alone to go to the bathroom.

"It's a crazy feeling as a parent to have him mobbed by so many fans," she told me as we watched her son compete. "It's hilarious. He doesn't get much rest."

Then, she excused herself from our conversation to turn and film her son become a world champion.

In a previous version of this story, competitor Kevin Hays' name was misspelled.