Accessibility links
From Crape Myrtles To Long Houses, Charleston Is A 'Big Barbados' This South Carolina city has its architectural and economic roots in the Caribbean. 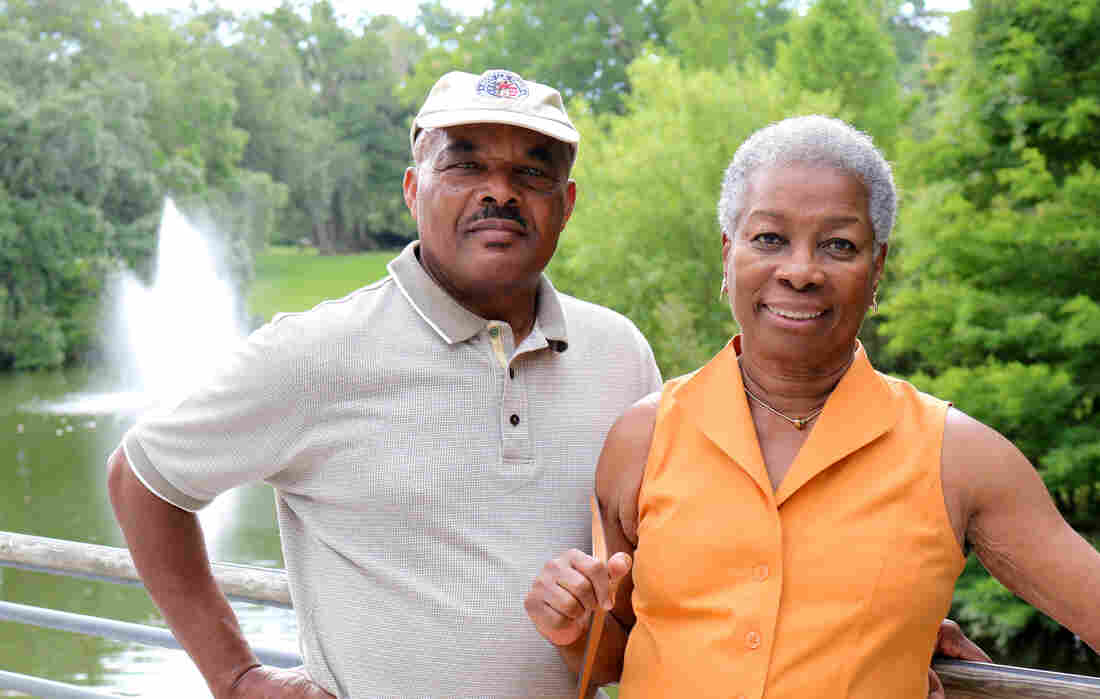 Robert and Rhoda Green founded the Barbados and The Carolinas Legacy Foundation and guide visitors to South Carolina along a trail exploring the state's unique connection to their homeland. Kenya Downs for NPR hide caption

This summer, Morning Edition is taking you on adventures off the beaten path — trails that transport us to a special, hidden place.

When Rhoda Green and her husband, Robert, moved from Harlem, N.Y., to Charleston, S.C., in the 1970s, the city seemed eerily familiar. They looked around and saw the same street names and architecture as the capital of their homeland, Barbados.

"I would tell Rhoda, 'Hey look I was just in this place and all the names are the same thing. What is happening?" Robert Green says with a laugh while recalling their first few years. "We realized this place was a small Barbados, or a big Barbados I should say."

Rhoda Green was so fascinated that she started digging deeper. As it turned out, Charleston is a "big Barbados." In fact, there's a unique connection between the Carolinas and Barbados that explains the similarities.

"The people that were here at the founding of this colony were from Barbados," Rhoda says. "They were British, or British-born, they were the enslaved who worked on Barbados plantations and they were [Barbadian] indentured servants."

Rhoda now runs the Barbados and The Carolinas Legacy Foundation and is an honorary consul for the island. She volunteers as a guide for visitors on a personalized trail that explores Charleston's Caribbean history.

From the rice fields of the coastal Low Country through the downtown streets of the historic city, the tour traces the founding of the original Carolina colony — what is now North Carolina and South Carolina. The journey begins at the colony's birthplace: Charles Towne Landing.

"Charles Towne, in 1670, was the 'colony of a colony' because Barbados was the most thriving colony of that time period of England," says Park Manager Rob Powell. "And really, Charles Towne is a branch of the colony of Barbados."

Now a state park, Charles Towne Landing features trails and a museum that explores the lives of the Carolina colony's first settlers. Piped-in sounds of seagulls and ocean waves fill the air as visitors board mock ships simulating those early voyages. 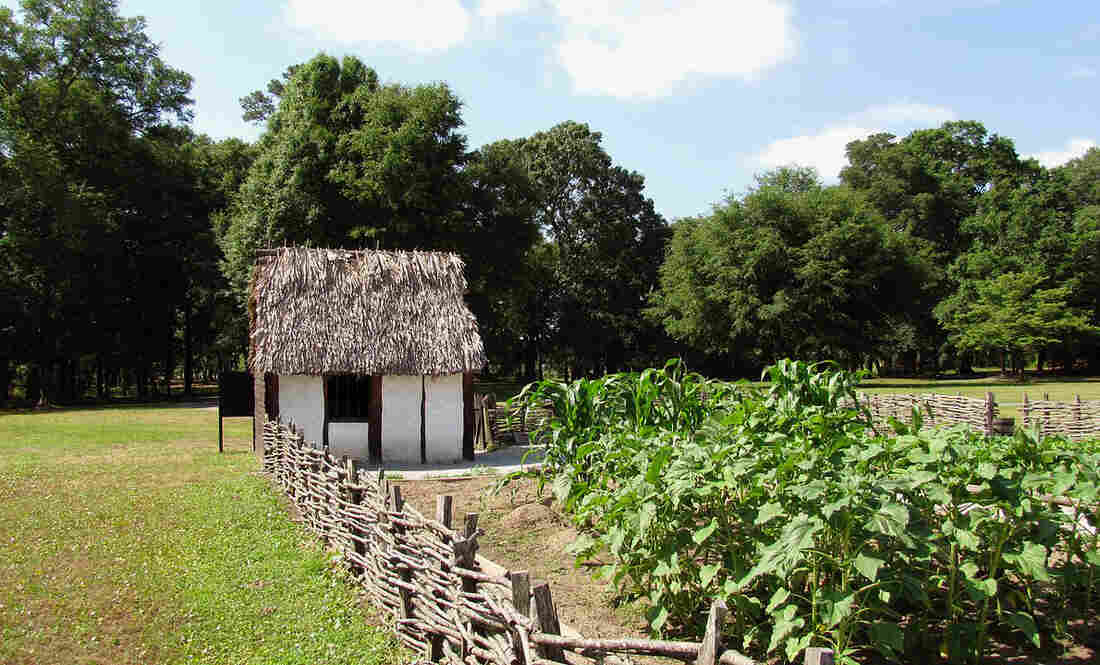 A "conceptual replica" of a hut and garden used by the settlers at Charles Towne Landing. The state park is the site of the original Carolina Colony, founded by settlers who sailed from Barbados. Brian Stansberry via Wikimedia Commons hide caption

English-born settlers living in Barbados wanted more land to mirror the island's thriving sugar industry. So they sailed to North America, bringing along black Barbadian slaves and white Barbadian indentured servants. As Powell explains, the plantation-based system of slavery came to define the economy of the American South.

"The plantation economy started in Barbados, and of course it moved to Charles Towne," Powell says. "Not only the economy, but the architecture transferred from Barbados to Charles Towne and you can still see that evidenced today."

That Barbadian architecture is key to Charleston's draw as a tourist destination. Rhoda Green says "big Barbados" and "small Barbados" — that's Charleston and Barbados' capital of Bridgetown — have almost exactly the same layout. Both cities have the same charming cobblestone streets lined with crape myrtle trees and bright, colonial buildings. 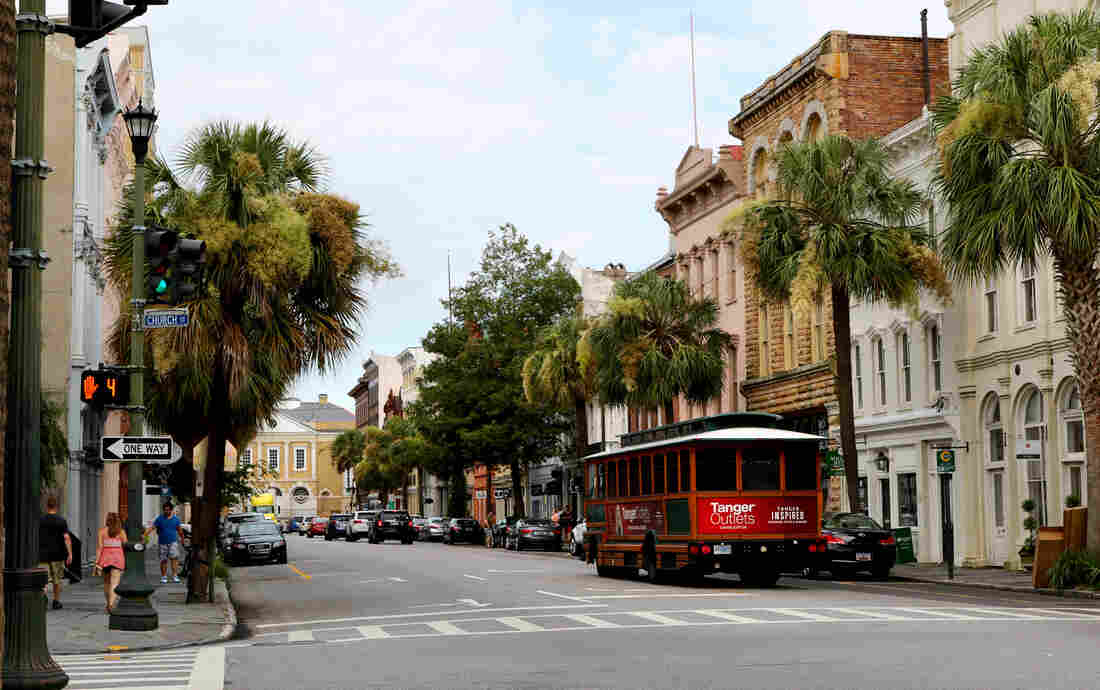 The architecture of downtown Charleston, S.C., is modeled after its sister colony, Bridgetown, Barbados. Many of Charleston's first settlers were white voyagers and black slaves from the island. Kenya Downs for NPR hide caption 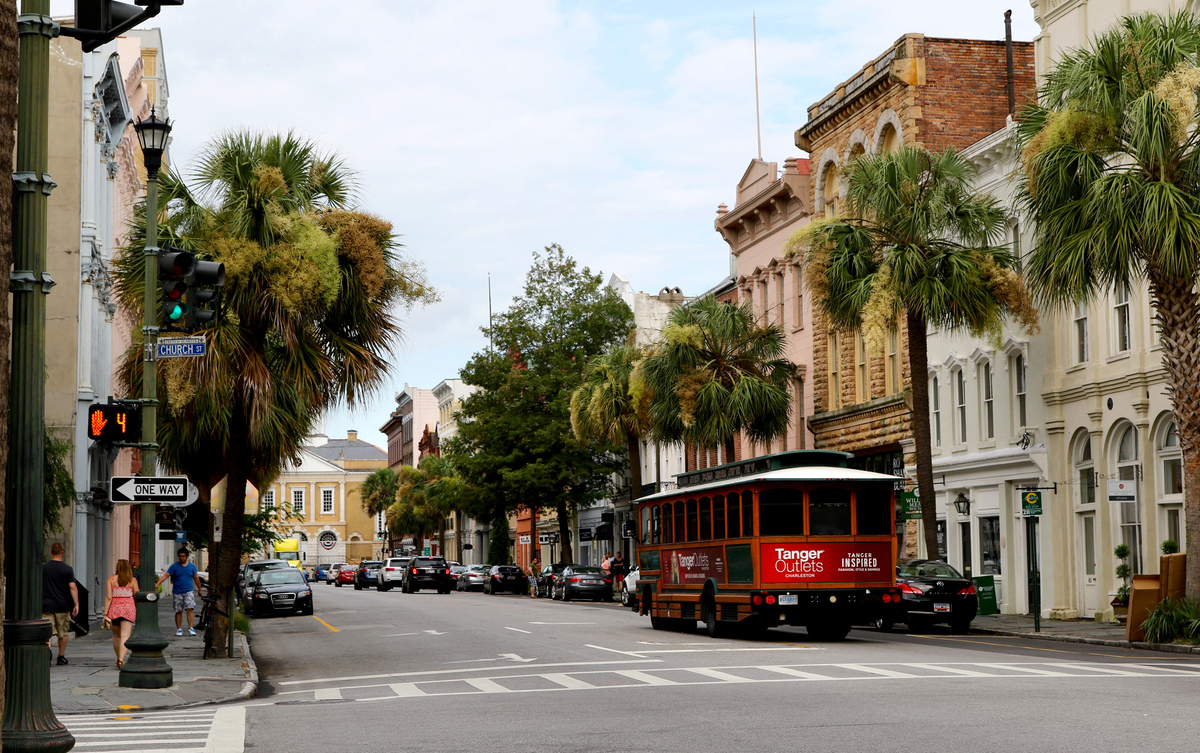 The architecture of downtown Charleston, S.C., is modeled after its sister colony, Bridgetown, Barbados. Many of Charleston's first settlers were white voyagers and black slaves from the island.

And Green points out one way in which Charleston may actually be more Barbadian than Bridgetown. As the trail now ventures through downtown, she points out a few "single houses." Also called long houses, they're shotgun-style homes with a narrow facade on the street side.

"They're basically that one narrow room and you get in from the side," she says, "And then they would have verandas or porches."

A series of fires destroyed most of Bridgetown's single houses in the late 17th century. Only a handful remain in Barbados today, so they're now essentially unique to Charleston.

Next the tour leads visitors along a narrow street lined with traditional row houses and tropical palm trees. Each home is a different pastel color. It's Charleston's Rainbow Row. Here is where Charleston's Caribbean connection is most visible; it looks more like a remote island than a U.S. city.

Shallun Evelyn, a Barbadian visiting from Maryland and — full disclosure — a traveling companion of this correspondent, immediately sees the similarities. It's so familiar, he questions whether perhaps he's been here before.

"I feel like I'm back home in Bridgetown," he says. "The only difference is people are driving on the right side of the road instead of the left."

That's the point of the journey, Rhoda Green says — that despite our differences, there's a historical and spiritual connection that transcends race, class and even borders. The trail is meant to highlight those people and places history books may have missed.

"The English colonists, their presence and their footprints are very, very prominent," Green says. "But behind them, you have the unnamed, the faceless, the people who weren't recorded in history."

Green says telling the story of those unnamed people is why she offers this tour: to shed some light on an ugly past that helped shape Charleston.

Kenya Downs is a freelance journalist and 2015 International Center for Journalists reporting fellow.