Accessibility links
A Lifelong Surfer Explains Why There's No Such Thing As A 'Perfect' Wave "Waves are not stationary objects in nature. They're not diamonds or roses or something that you just look at," says New Yorker journalist William Finnegan. His new memoir is called Barbarian Days. 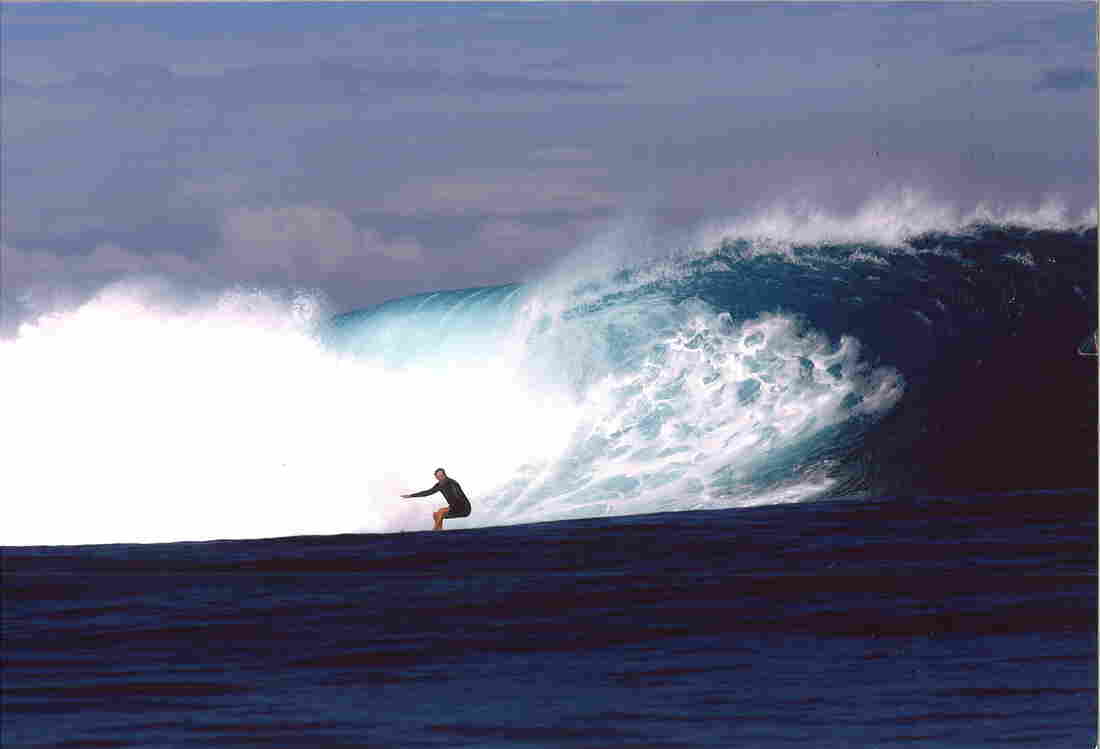 William Finnegan surfs Cloudbreak, off the island of Tavarua in Fiji, in 2005. Scott Winer hide caption 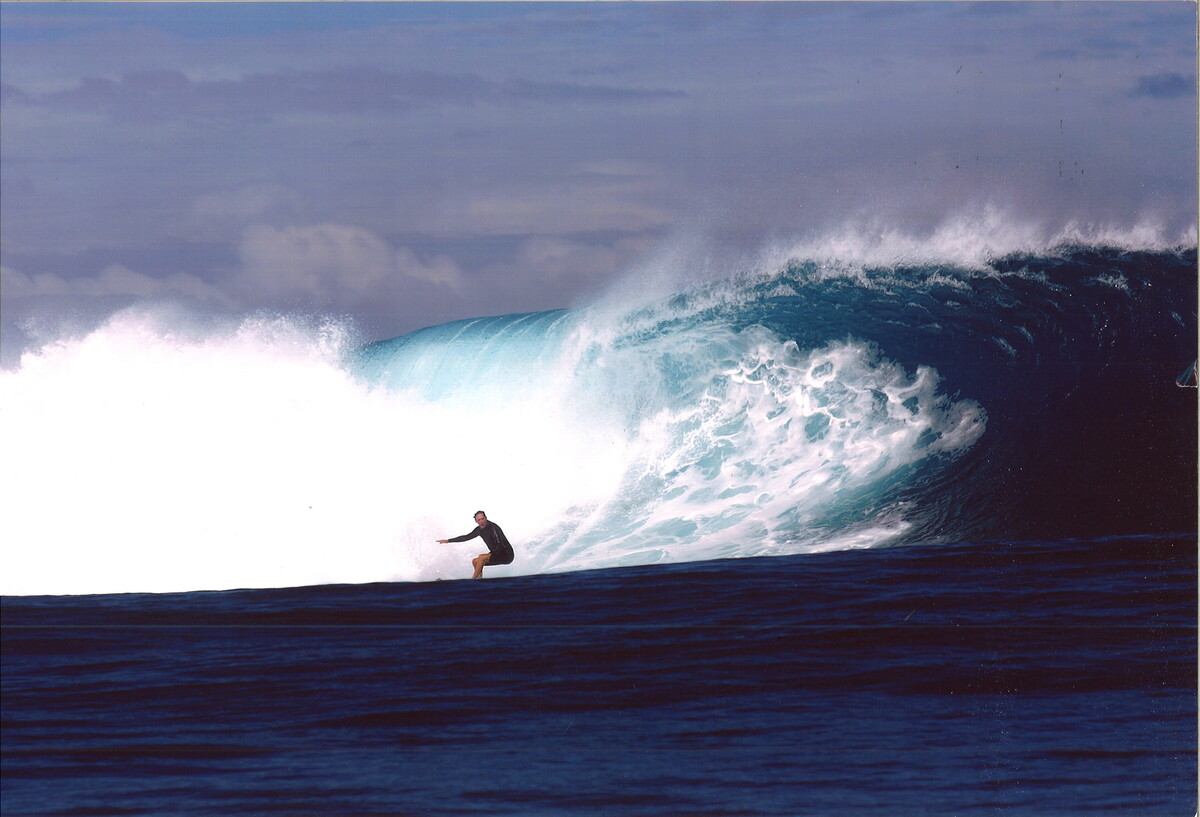 William Finnegan surfs Cloudbreak, off the island of Tavarua in Fiji, in 2005.

William Finnegan is a New Yorker journalist, but his new memoir doesn't focus on the wars or controversies he's covered. It's about surfing.

Finnegan traces his love of surfing back to his childhood, when he used to watch surfers in Ventura, Calif. He remembers being 10 years old, sitting with his family in a diner, watching waves break on the coast.

It seemed "like they were arriving from some celestial workshop ... carved by ocean angels," he writes. "I wanted to be out there, learning to dance on water."

Finnegan talks with NPR's Renee Montagne about different surfing styles, his quest to find the perfect wave and what it's like to keep surfing as you get older. 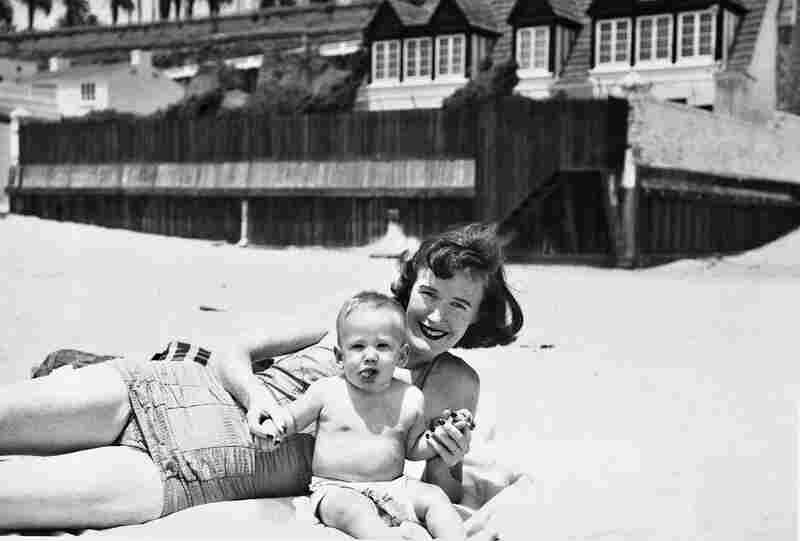 Finnegan on the beach in Santa Monica, Calif., with his mother in 1953. Courtesy of William Finnegan hide caption

I'd been surfing a couple of years by the time we moved there and so I had all these preconceptions about Hawaii formed by surfing magazines and instead, here was the actual thing itself, and the seawater smelled strange and the coral was scary and who are these people? But, I really got into those spots and trying to read those waves.

On being exposed to different styles of surfing 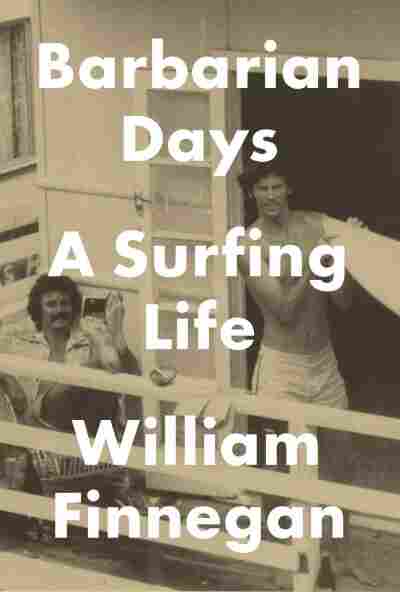 I met some guys — including a kid my age named Roddy Kaulukukui and his brothers. The Kaulukukuis were a surfing family, Hawaiian. They surfed a kind of island style that I hadn't seen before. But they used to make fun of other families that surfed even more island style. And they kind of caricature these styles in some ways.

You know: hands up and back and legs quite wide and behind thrust out. And it — this is an exaggerated version. And this family they were making fun of were actually — they were great surfers. They were big wave surfers. And it really widened the horizons. And I had a very cold water, stiff, kind of white boy California style.

On being inspired by the 1966 surfing documentary Endless Summer, in which surfers travel the world looking for the perfect wave

I was heavily influenced by that movie. I think I and a lot of my friends had our career goals seriously warped by that movie. I didn't really even think about it. It just sort of felt mandatory. I'd have to go looking for waves. I'd set off in 1978 with my friend Bryan Di Salvatore, also a writer and a surfer, first to the South Seas then Australia, South East Asia. Ended up spending nearly four years traveling, looking for waves. In the South Seas in Fiji, we actually found an uninhabited island — a wave that was the best wave that either of us had ever seen.

On finally finding that perfect wave

I was on a yacht that had some surfers also looking for waves, some Australians. And I heard, or one of those guys overheard, broadcasts between two other boats — something about a perfect 300 yard left. And we searched and searched and got quite lucky. ... We made it there. I mean the fishermen we got to take us across the channel to this little uninhabited island — they had never seen a surfboard before. They didn't believe that we could stand up on them — they thought they were airplane wings. And so it was really a sort of the dawn of discovery of that place, which is now one of the most famous waves in the world.

On what made the wave "perfect"

Perfect is a terrible word, actually. Surfers have kind of a perfection fetish. "And it was perfect." Waves are not stationary objects in nature. They're not diamonds or roses or something that you just look at. They're — they're the end of a long process, it's an explosion across a reef and wind, tide, everything affects every wave.

On great surfing areas, such as Tavarua Island in Fiji, being turned into commodities

We tried to keep it secret. So some years later, we pick up a surf magazine and there it is splashed all over the cover. The secret had got out and not only that, but a couple of Americans had built a resort. And for the first time, these waves were essentially privatized with an agreement with the government that nobody else could surf there, so I was pretty horrified.

On how he became a paying guest of this surfing resort

Yeah, I swallowed my principles ultimately. I mean I really did think it was kind of politically indefensible but, I wanted to surf it so much that I eventually went back there as a paying guest and surfed there for a number of years — and as an embarrassed but happy paying guest.

On surfing at an older age

It's still pretty great. I mean it's horrifying to lose your quickness and strength. But, I think I've gained an appreciation of, you know, a good day in the water. I mean, I think when I was younger, it was easier to take it for granted that it would go on forever. You know as you get older you know it's not going to go on forever.

Read an excerpt of Barbarian Days