Accessibility links
Review: 'Foulsham,' By Edward Carey This second volume in Edward Carey's Iremonger Trilogy leaves the forbidding Heap House behind to explore a strange alternate London where people can turn into objects — and objects into people.

'Foulsham' Ventures Forth Into A Grimy, Enthralling City

'Foulsham' Ventures Forth Into A Grimy, Enthralling City 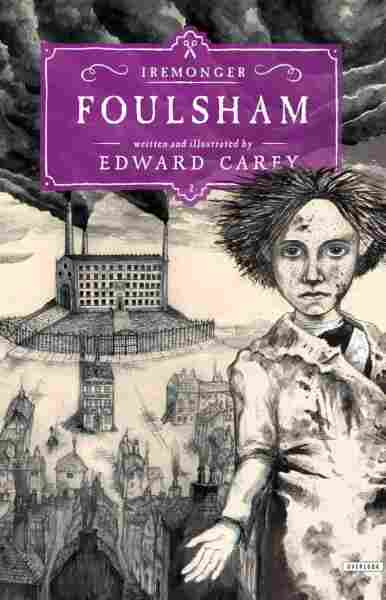 Edward Carey's Heap House, the first book in his Iremonger trilogy, was one of my top two books last year and left me shaking my fist at the whole tribe of trilogies for leaving me on such a note as it did. If you haven't read Heap House, I advise — encourage — beseech you to do so, because it is a perfect book except for the shock of it being the first book of three, and very little will make sense in Foulsham otherwise.

In order to talk about Foulsham, I need to spoil Heap House, so if you'd rather be delighted by its every turn and twist, avert your eyes — but do so knowing that Foulsham is very nearly as good as its predecessor, hampered only by some small middle-book woes, and does an excellent job of setting up the final volume.

In Heap House we were introduced to Clodius Iremonger and his family, who live in the titular Heap House, always accompanied by their special birth objects and surrounded by the brooding weather system of the heaps. These are enormous mountains of London's trash that are sorted by the poor and destitute of the borough of Forlichingham — called Filching — and most lately called Foulsham, as it has lately become a murkier, drippier, more horrible place than ever before. Where Heap House and its residents were the main mystery in the first book, Foulsham and its citizens are foregrounded here, trying to make ends meet and resisting as much as possible the "sickness" that literally turns people into objects.

Foulsham is a walled borough, separated from Heap House on one side and from London proper on the other. Rat-catching is a respectable profession; a frightening Tailor stalks the streets; an old woman lovingly dusts a collection of former husbands who now exist as a vase, a paper slicer, and a handbell. The poverty is so extreme that families will often "ticket" their children, pawning them to the Iremongers for large sums; the children are then put to work in Bayleaf House Factory , though no one knows quite what they make there, or what becomes of them beyond its gates.

Living in Bayleaf House Factory — an unsettling place where one can hear, but never see, other children calling out — we find James Henry Hayward, formerly Clodius' bath plug, with his governess Ada Cruickshanks, formerly Lucy Pennant's box of matches. James now clutches a half-sovereign named Clodius Iremonger, and is cautioned never to spend him; Ada feels the agonizing pull of a clay button named Lucy Pennant, lost in the heaps, trying to become a girl again. When Ada succumbs, turning back into a box of matches, James seizes his chance to escape and find his family. In so doing he spends his "half-sov" in a pie shop; this sets the fast-paced plot of Foulsham in motion, as we follow Clod-the-coin through the town, piecing together bits of the overarching puzzle along the way.

That puzzle is still, partly, to do with the relationship between people and objects, and how they turn into each other. I was dazzled by the implications of this system in Heap House, and very curious to see how currency would change the equation: what would it mean for Clod to be literally turned into his market worth and to pass from hand to hand in Foulsham? I'm still pondering it, as the answer — which is brilliant — raises several more questions about the nature of the object sickness, the power of the Iremongers, and the relationship of Foulsham to London and the rest of the world.

In Foulsham as in Heap House, Edward Carey's inky illustrations help establish the tone, introduce the characters, and evoke the atmosphere of the book. I highly recommend perusing the author's website, which has an illustration of the whole town and clickable sites of interest.

The pace of Foulsham is much faster than that of Heap House, so a number of important things come up amidst flurries of action; this is very exciting, but sometimes makes revelations and plot shenanigans seem arbitrary, where Heap House had a slower, more organic build. But just like Heap House, the character voices, new and old, are varied and wonderful, the situations terrifying and exhilarating, and the concept and execution so desk-thumpingly good that I resented having to spend time away from reading it. I love this series' structure, beginning from a single house and expanding outward into a borough and then a city, widening the scope of its action even as it widens the circle of its concept's implications.

It takes a pretty phenomenal book to make me long for November at the height of summer, but that's just what Foulsham's done; I'm left counting the days until Lungdon comes out to conclude the whole.