Accessibility links
Syfy's 'Sharknado 3' Fails At Being Really Good Bad Television Syfy debuts the third installment in its disaster movie spoof franchise. But it isn't fun to watch — even ironically — and the film falls short, even as it inspires imitators on other channels. 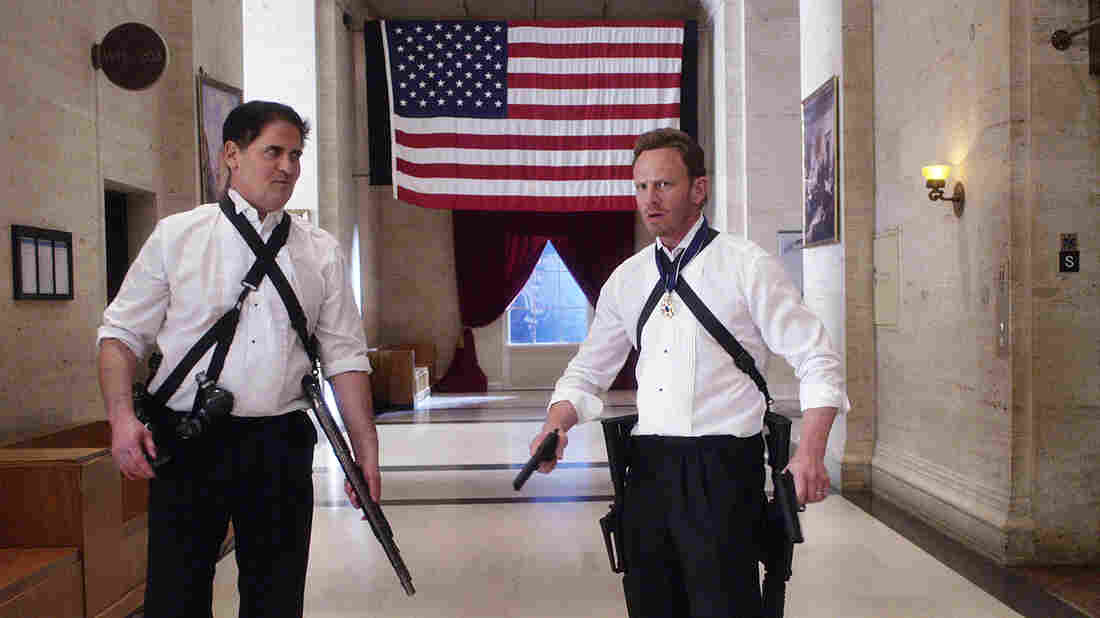 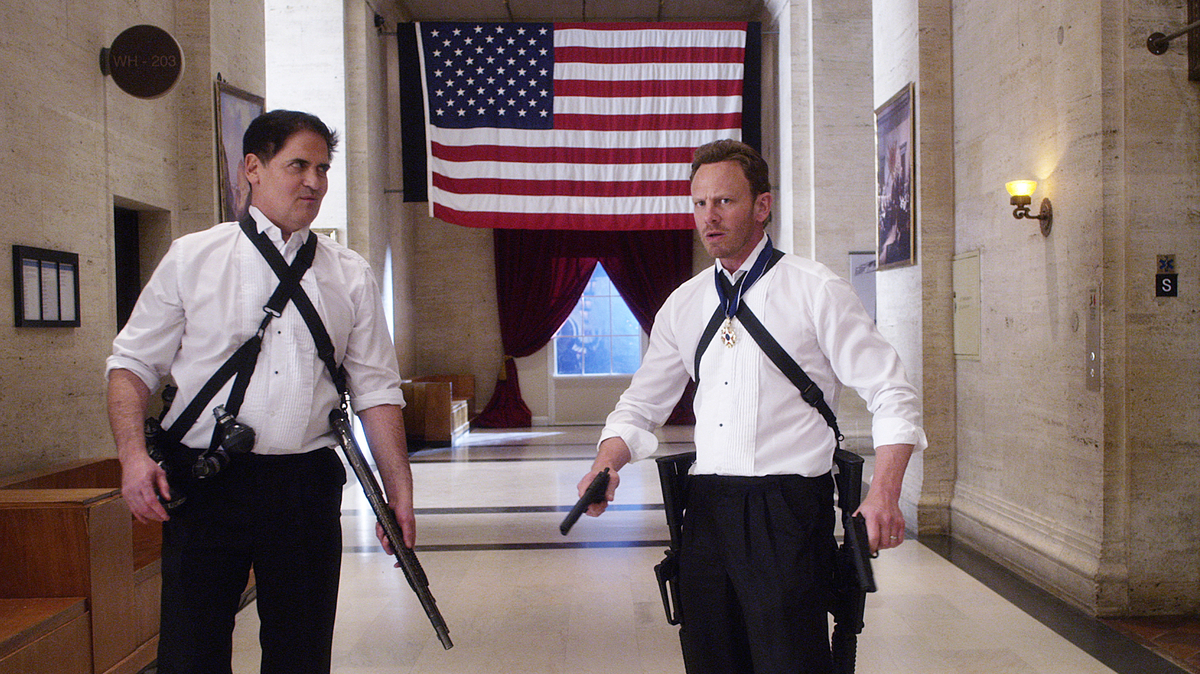 Mark Cuban, left, as President of the United States, faces killer sharks with Ian Ziering in the Syfy film Sharknado 3: Oh Hell No!

For connoisseurs of wonderfully bad television, there is a fine line between stuff that's so bad it's great fun to watch and stuff that's just bad.

And Syfy's latest Sharknado movie — the third one based on tornadoes filled with killer sharks terrorizing America, if you can believe it — has finally, unfortunately, fallen into that last category.

It's not that Sharknado 3: Oh Hell No! lives down to its title by casting spectacularly wooden Shark Tank star Mark Cuban as the president and a perpetually complaining Ann Coulter as his vice president. Or that the king of C-list celebrity David Hasselhoff, shows up as the crusty, estranged father of Ian Ziering's hero, Fin Shepard.

That's the stuff we fans of great bad television love.

No, the real sign that Sharknado 3 is beating a dead horse — or shark — into a fine paste is the fact that none of this feels fresh, new or remotely funny anymore.

Consider the cameo appearances from the top four anchors at NBC's Today show, who treat a storm that buffeted Washington, D.C., with all the seriousness of a terrorist attack.

"The Washington Monument, the White House, not far from where we are right now ... both destroyed by the worst sharknado this country has seen since the first formation two years ago," Today host Matt Lauer says. But since we've seen this act twice before, it mostly looks like product placement for Syfy's corporate parent, NBCUniversal.

This won't necessarily bother Syfy or NBCUniversal, which seem to be counting on Sharknado to repeat its past success as a buzzed-about topic on Twitter and other social media. In anticipation of renewed attention, the film is packed with corporate siblings like Universal Studios theme parks, Xfinity online services, Comcast cable and more.

Even Ziering, who has turned playing hyper-focused disaster movie hero Fin Shepard into a deadpan art, can't save this one. Not when he's forced to explain to President Cuban — ugh — why he thinks the Sharknado that devastated the nation's capitol was just a start.

"I know how this is going to sound, but I can sense these storms now," he says, intensely. "These sharks have a scent, and it's not a pretty one."

Neither is the smell of this movie, which has the distinct aroma of a joke repeated a few too many times.

Such spoof films are pretty much critic-proof — how can you criticize a movie that's basically an intentionally unintentional comedy?

This is also part of a trend. Syfy has been making B-movie disaster films for a while now. In the Sharknado series, they've found that turning into the skid of bad acting and low budgets on these projects can bring even more attention, and other cable channels have noticed.

Lifetime let Will Ferrell make A Deadly Adoption; an essentially straight film about a successful couple who take in a pregnant woman with hopes of adopting her baby only to see her turn into a dangerous psycho. It was a note-perfect recreation of the channel's actual women-in-peril movies, made awkward by the fact that the actors played it too straight to generate many laughs.

Ferrell also has made miniseries spoofs for IFC — The Spoils of Babylon and The Spoils Before Dying — that were packed with big names like Haley Joel Osment and Tobey Maguire playing melodramatic roles pretty straight. Even some of Lifetime's ostensibly serious movies like its Unauthorized Saved by the Bell Story seem built more to draw laughs from the audience than anything.

These projects make sense for the cable channels. They draw media coverage and pull in viewers who would normally make fun of the channel's more serious fare, bringing a new dimension to their audience.

But that tactic doesn't work so well if the movie in question isn't fun to watch, even ironically.

And that's where the latest Sharknado really fails, leaving some fans of awful TV to wonder what we truly found so funny about shark-filled tornadoes in the first place.