Accessibility links
Jake Gyllenhaal On Throwing (And Taking) Punches: 'It's Very Primal' In Southpaw, Gyllenhaal plays a boxer who grew up in foster care and is struggling to become a father to his daughter. "I don't like getting hit, but it was important for the movie," he says. 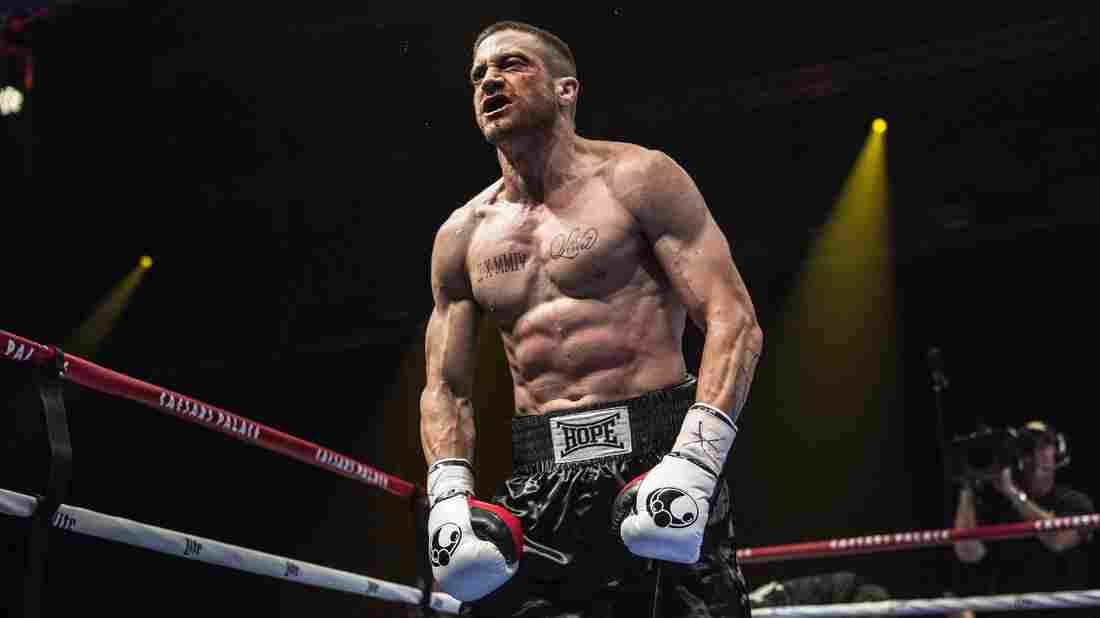 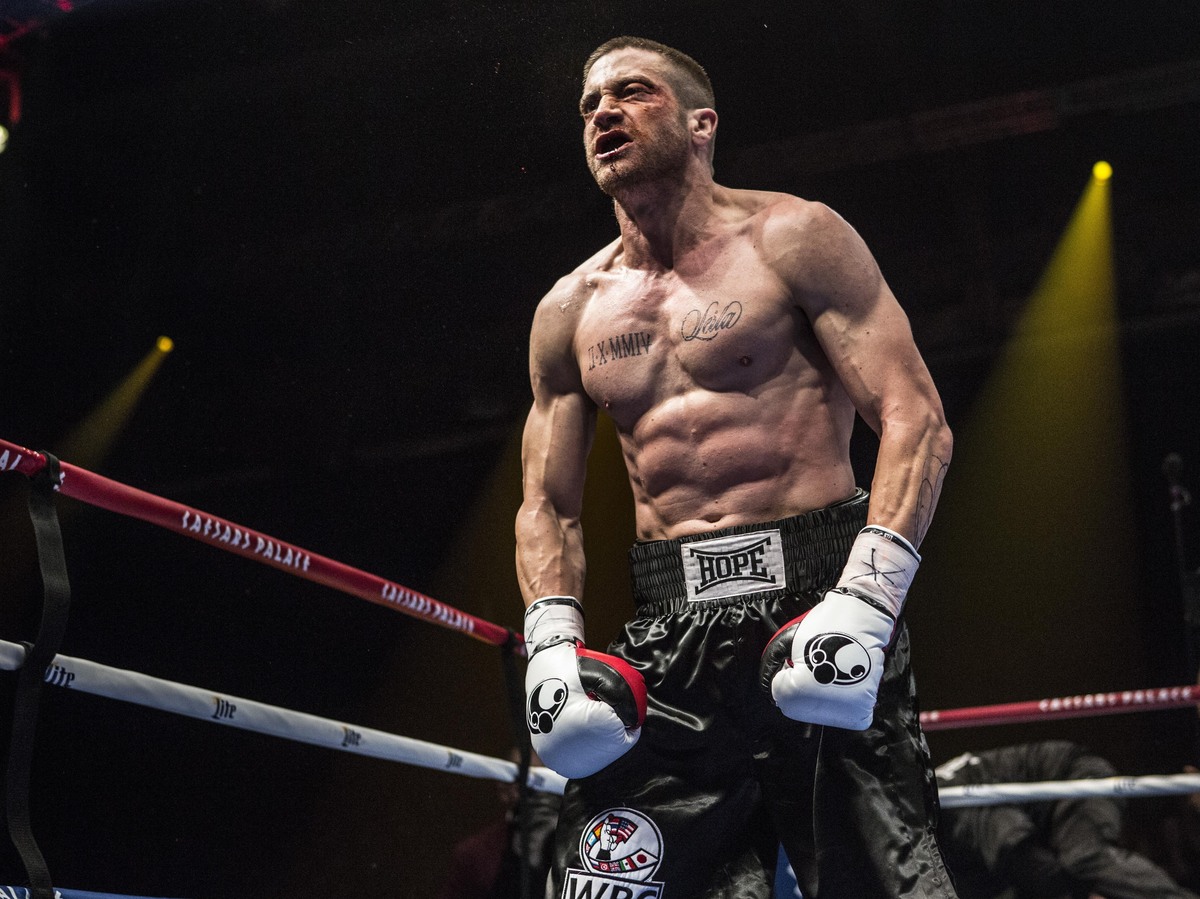 Actor Jake Gyllenhaal knows what it feels like to take a punch. "It doesn't feel great, you know," he tells Fresh Air's Terry Gross. "I don't like getting hit, but it was important for the movie. At least that's how I justify when I would get hit: 'That was good for the movie.' "

The movie in question is Southpaw, in which Gyllenhaal stars as a boxer who grew up in the foster care system and is struggling to be a father to his daughter. 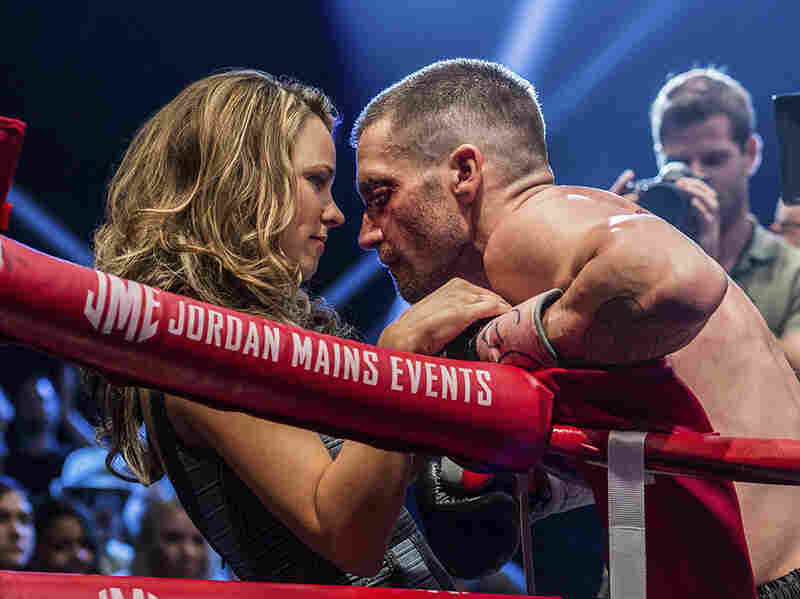 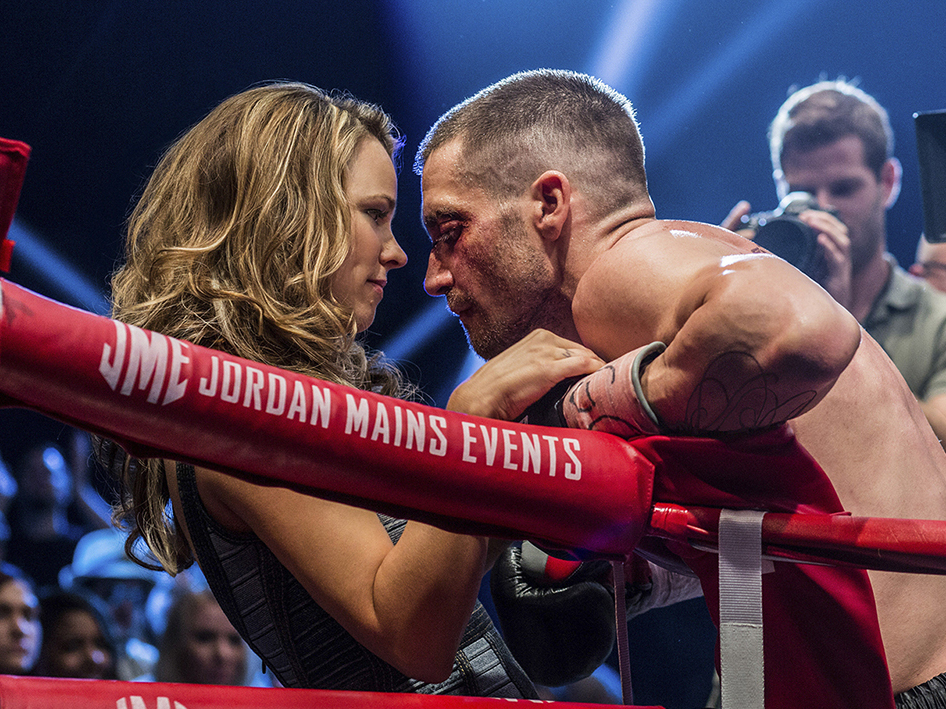 The actor says that it was the father-daughter relationship that initially drew him to the role: "[Director] Antoine Fuqua always said to me that he wanted this movie to be for the young men out there who never necessarily had a father figure ... to know that being a father is the most honorable job that you can have in your life."

But boxing was also part of the job, and so the actor spent five months learning the ways of the ring. During that time, Gyllenhaal says, his appreciation for the sport — both its brutality and its grace — grew. He likens the discipline, skill and sacrifice required of boxers to that of ballet dancers. "When I see and am moved watching Swan Lake, I'm equally as moved watching Cassius Clay, you know, Muhammad Ali," he says. "I think that there's a similarity — the beauty and the art and the angles and the science."

On training and developing a very muscular body

I spent five months learning how to box, so over those five months as I started to become more fluent in the language of boxing, what happens is you learn combinations or you learn offensive and defensive moves, and then you need your mind to be able to translate itself through your body. And so as you learn more you need to be in better shape. And so, over five months, slowly I sort of chipped away at it, and got in very, very, very good physical shape in order to kind of translate what had been taught to me skill-wise.

On how his physical training for Southpaw affected him mentally

You basically walk into a ring half-naked and it's very primal in that way. ... There's a boldness, a confidence with your body that comes with being a boxer.

You basically walk into a ring half-naked, and it's very primal in that way. ... There's a boldness, a confidence with your body that comes with being a boxer ... More than that, in terms of how you look on the outside, I think, my feelings about my endurance and my own strength and confidence, it was life-changing, to be honest. I felt ... more confident, internally, than I had in my whole life, and that was not just due to the physical stuff, it was really due to learning boxing and knowing that I could defend myself if I needed to.

In terms of getting hit, I think that's inevitable, and it's hard to play a boxer in a movie and not know what that feels like and not actually take a punch or give a punch. To me, when you're playing a character ... whether it's directly or indirectly, [you try to experience] the feeling of what your character might be going through somewhere in the real world. ...

As actors would say "[my face] is my instrument," and I do believe that and I do believe in taking care of yourself, but there's something that happens ... sometimes in the middle of a scene, in the presence of a feeling in the middle of a scene, those things do take over and you let go to the moment that you're in, so the repercussions of those things — maybe it's not safe and it sometimes isn't — but I don't always think about that, and maybe I should.

I remember I went to some sort of party with my parents and Billy Crystal was there and he saw me and he said, "Will he come in and read for this movie I have?" ... I guess I must've been acting out — if you spent more time with me in real life you'd see I like to act out — and so I was making some fool out of myself. I think I remember what happened — he was leaving and I knew who he was and I picked up a chair from the table and I said, "Here, take this. This is your party favor." That's just me. It doesn't make much sense, but he loved it and he thought it was really funny.

On his break-out role in Donnie Darko

I was at Columbia [University] ... and I think I was searching for this creative outlet. ... When I read that script I remember very clearly thinking, "Wow," because it was at the time when all of those movies about high school ... were about who was going to go to the prom or who was going to go to the party and get accepted in the cool kids club ... and this was a movie about high school, but it was about the internal ride that is adolescence ... and I read it and went, "Wow, this is really what I'm feeling." ...

I think it's that age where you're moving out of a life that's protected and safe into a world that is ... more scary and a little bit more dangerous and more fun and exciting, and trying to navigate through those things are all what being an adolescent ... is about.

It was fascinating, particularly because I don't think we knew what a success the movie would be, what it would become and it was an intimate and really scary thing for me and Heath, in particular, to dive into. It was uncomfortable for both of us in some of the scenes, and yet we both deeply believed in what the movie was saying. ... At the time it was pretty unreal. ... The emotional response you get from that movie from people who see that movie, I think it was one of the first movies where people would go, "Oh, I can see it as love." Believe me, we got a lot of other responses, too.

'Nightcrawler' Jake Gyllenhaal: We're All Complicit In 'If It Bleeds, It Leads'

Jake Gyllenhaal On The Rewards Of Role Research

On how Ledger's death has affected him

I miss him as a human being and I miss working with him and what an unfortunate thing it is that we won't be able to see the beauty of his expression. ...

I'm trying to be present where I am. I'm trying to have relationships that are as real as they possibly can be on a movie set, be close to people because I know that it's precious. And I know, not only can this career end in a very short period of time and this or that can happen, but also that life is precious. I think losing Heath and being a part of a family that was something like the movie, that movie we all made together, makes you see that, makes you appreciate that and hopefully moves you away from the things that really don't matter to the things that do.