Accessibility links
Review: 'Let Me Tell You,' By Shirley Jackson This collection of the author's early fiction, unpublished stories and personal essays is a delightfully uneasy mix of wry family observation and the chills her eerie later work is known for. 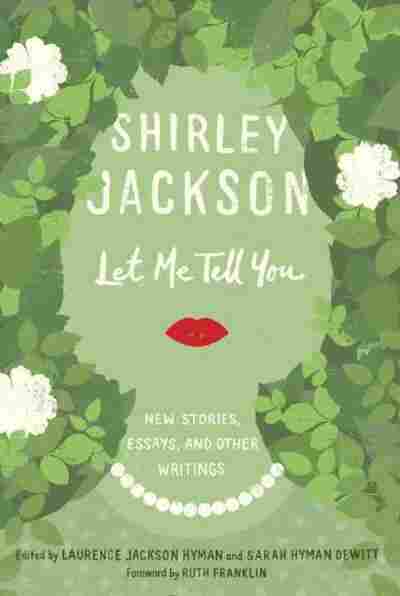 Let Me Tell You

New Stories, Essays, and Other Writings

To read one of Shirley Jackson's signature works is to live in a house built on sand. From novels like We Have Always Lived in the Castle to the iconic "The Lottery," Jackson's worlds carve some essential, uncanny instability out of the everyday, and any of us can sink without warning into something consuming we can't understand — or, worse, that we understand all too well. This thread of the supernatural can be found in most of Jackson's major works; in one of the personal essays collected in Let Me Tell You, the author herself admits, "I don't think I like reality very much."

But Let Me Tell You — a collection of Jackson's early fiction, unpublished stories and personal essays, edited by her children Lawrence Hyman Jackson and Sarah Hyman DeWitt — proves otherwise. Though that foundation of the uncanny has become her calling card, this collection features very few stories with an overtly supernatural bent. When they appear, of course they're as unsettling as you expect. Beware the painstaking housewife encroached upon by a sloppy family of strangers, or the man lost in the woods who stumbles across a house rendered in true Jackson style — with a sense that the world knows more than a person ever can, and it's out to prove it: "Over him, over the roses, over the house, the trees leaned eagerly."

But by and large, Let Me Tell You is more interested in the ghosts within the house than the frightening sand beneath it. The fiction here offers a satisfying, subtly creepy array of short stories about the horrors lurking in everyday life; Jackson combines suburbia's endless fount of petty horrors with implicit social criticisms (nearly all the married women, who give up their identities to the men they marry, seem to chafe at it).

Though there is, unsurprisingly, a sense of grim delight when dealing with destructive outsiders, Jackson's keen eye is turned on all alike — everyone has equal capacity for wretchedness and sympathy — and many of the stories feel as insidiously claustrophobic as the lives of their characters.

The rest of Let Me Tell You draws from Jackson's personal and personable essays, many of which were published in 'women's magazines,' precursors to the sort of observational-autobiographical essays that would later become the calling card of writers like Erma Bombeck (in the foreword, Ruth Franklin even invokes mommy bloggers, though one wonders what Jackson would do with the comparison).

Some of them bubble over with the sort of earnest intelligence that feels like sitting down for a cup of coffee with Jackson herself. She admits with admirable candor, "I loathe writing autobiographical material because if it's dull no one should have to read it anyway, and if it's interesting I should be using it for a story," but relates dryly humorous family tableaux, and somehow manages to write one of the most insightful essays on clowns that you'll read this year (I hope — I don't know how many clown-based essays per year is the average, and I don't want to know).

But like any good Shirley Jackson story, the sense of unease is what keeps us reading. Jackson has a well-earned reputation as a master of ghost stories where people are possibly haunting themselves, and some of her finest essays in Let Me Tell You are just that. The fictionalized versions of her family bickering at dinner are charming, but the fictionalized version of her family dealing with a very peculiar house, or an even more peculiar set of postcards, are the sort that make you set down the book a second just to make sure the coast is clear.

They also present a distance between the real and unreal — the Shirley Jackson who appears in these essays and the characters in her fiction who become quietly devoured by something they can't explain — and make the reader question just what sort of story Jackson's telling. It's a fitting sentiment to linger after a book that feels like an uncanny dollhouse: Everything perfectly rendered, but something deliciously not quite right.