Accessibility links
'Southpaw' Makes A Bruised Bruiser Out Of Jake Gyllenhaal In the story of a struggling boxer, Gyllenhaal undergoes a physical transformation that's more and more common for actors in a superhero-driven world.

'Southpaw' Makes A Bruised Bruiser Out Of Jake Gyllenhaal

'Southpaw' Makes A Bruised Bruiser Out Of Jake Gyllenhaal 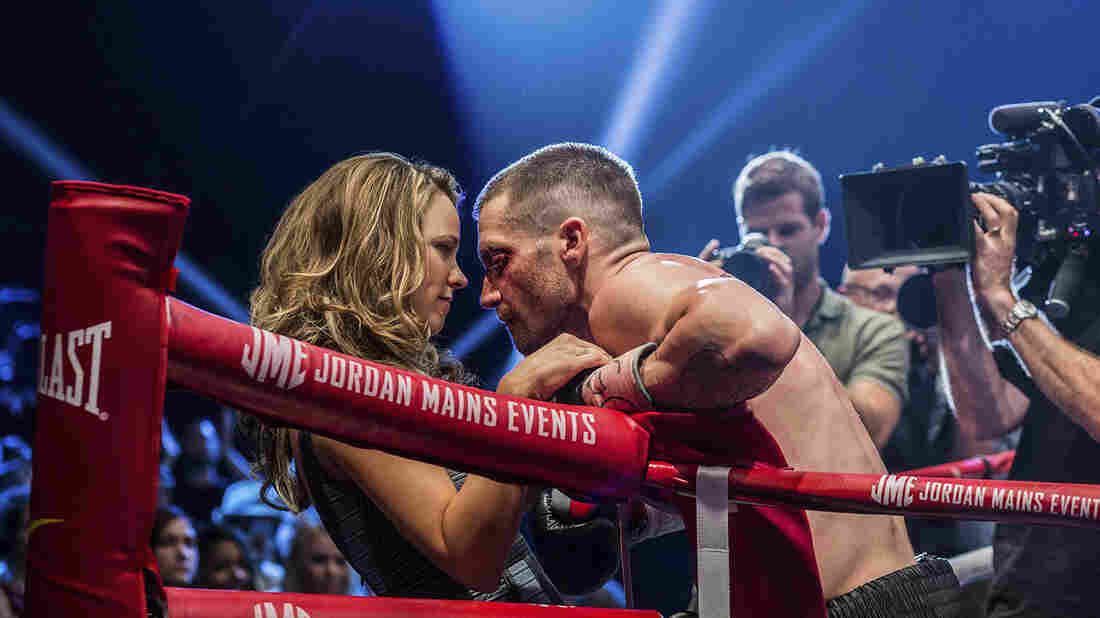 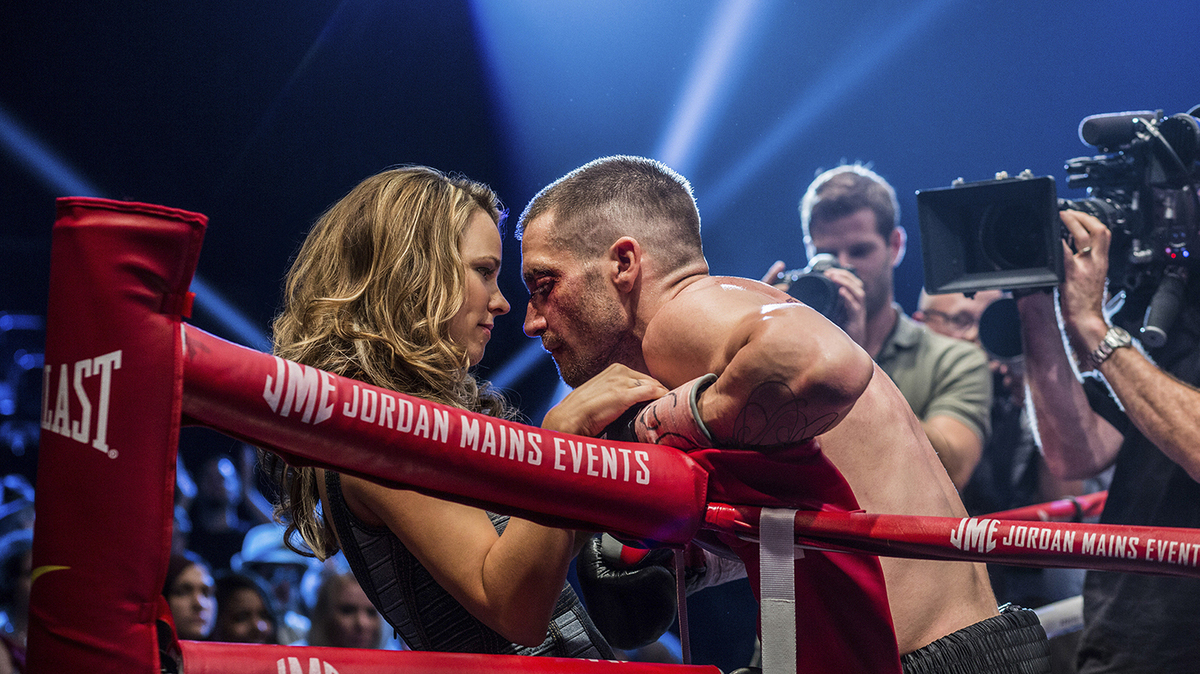 Rachel McAdams as Maureen Hope and Jake Gyllenhaal as Billy Hope in Southpaw.

Don't call it a comeback: The grimy boxing melodrama Southpaw is so old-fashioned and unsophisticated it's almost new. Initiated as a remake of 1979's sap-soaked The Champ with Eminem in the lead role, it morphed into yet another opportunity for Jake Gyllenhaal to prove he's a contender. When he finally gets that Oscar he so clearly covets, it'll likely as not be a make-up award for his spooky turn as a sociopathic TV news cameraman in Nightcrawler last year.

Gyllenhaal isn't quite that good in Southpaw, but he's still pretty great. The orphan-turned-ex-con-turned-light-heavyweight champion Gyllenhaal plays is named Billy Hope — a sign of the degree of subtlety in Sons of Anarchy creator Kurt Sutter's screenplay, wherein every plot turn is as telegraphed as a tomato can's jab. I didn't care: Enough of it felt earned to me that Southpaw wins on points. With movies and TV inching ever closer to the meta singularity that will render all earnestness extinct, a film that doubles down on performance and dares to tell a simple story simply feels vaguely punk rock.

Or at least punk rock-era. In '70s-cinema terms, Southpaw is a mashup of Rocky and Kramer vs. Kramer — though it borrows more from the latter, actually. When Billy's wife (Rachel McAdams, trading in her True Detective Ka-Bar collection for a slinky dress and big hoop earrings) exits the scene, he falls into a tailspin, losing his boxing license, his manager (Curtis "50 Cent" Jackson), his fancy house, and finally, custody of his 10-year-old daughter Leila. (Oona Laurence avoids the cereal-commercial poise that makes most child actors so grating.) Billy's need for income, so that he can convince a judge that he's fit for fatherhood, is what sends him to the gym run by Tick Wills, who trained the only boxer ever to beat him. (Billy still got the decision, but he suspects that was because someone in his camp paid a bribe. "The fight game, you know," he shrugs.)

Wills is the movie's other bravura performance. Can it be true that the great Forest Whitaker has never played a crusty, philosophically inclined fight trainer before now? With a glass eye that doesn't match his real one? Who is secretly a big softie who lets the neighborhood kids train for free but fines them 50 pushups for cursing? It seems impossible, and yet IMDB insists 'tis so. Whatever: There's great pleasure to be had from watching Gyllenhaal and Whitaker play lonely, inarticulate guys trying squint and grunt — and above all, sweat — their way to revelation.

The movie spends a lot of time alone with Billy and Leila, too, as he faithfully visits her, hoping she'll finally speak to him. Sutter actually does do some subtle work in these scenes, never expecting us to care about this father-daughter relationship just because. Leila is more mature and rational than Billy, and the movie is smart enough to realize that's not funny or cute; it's a serious problem.

Indeed, Billy is the most nonverbal character Gyllenhaal has ever embodied, frequently defeated by the labor of stringing sentences together. Rocky Balboa sounds like Ali at his rhyming-trash-talk peak compared to this guy. But it's expressly because fight films emphasize discipline over eloquence that actors like Gyllenhaal — the ones who seem to crave respect even more than wealth or fame — can't resist them.

Like (in chronological order) Robert De Niro, Daniel Day-Lewis, Will Smith, Mark Wahlberg and Tom Hardy before, Gyllenhaal trained hard for months to look and move like a champion. Southpaw's press notes insist he didn't use a stunt double in the ring, and director Antoine Fuqua — an amateur fighter himself, though he usually makes movies about cops or soldiers — brought in HBO Boxing camera operators Todd Palladino and Rick Cypher to make the choreographed bouts look real. (David O. Russell did this in 2010's The Fighter, too.) Naturally, Fuqua takes advantage of the fact that these are staged fights to put his camera where it could never go in a real one. And as in every non-documentary boxing flick, the blows seem to land more cleanly and with more immediate effect than in life. Still, Southpaw's fights are still visceral and involving.

Once upon a time, physical transformations like Gyllenhaal's — he half-starved himself for Nightcrawler, then followed that up by making himself at least a convincing replica of an elite athlete — were rare signifiers of an actor's commitment. Fairly or not, they feel less significant now that Hollywood has gone full-time into the superhero business, spawning an entire sub-industry devoted to making youngish men from England, Ireland, Scotland, Australia, and on rare occasions the United States of America, look like Jim Lee drawings.

The difference is that playing Superman or Wolverine means making yourself look invulnerable, while vulnerability and exhaustion are what boxing movies are all about. Southpaw sometimes carries that idea to a laughable extreme: Gyllenhaal's face is an oozing deep-dish pizza of bruises and lacerations in every scene, even when months are supposed to have passed since his last fight. Still, you can't blame the guy. You've heard the expression that an actor's face is his tool? Sometimes it's his trophy, too.