Accessibility links
Infidelity Is Steeped In Suspense In 'Among The Ten Thousand Things' Julia Pierpont's debut novel opens with a young girl's discovery of her father's infidelity. Maureen Corrigan says that what follows is so unexpected and tense that it's a "fresh pleasure to read." 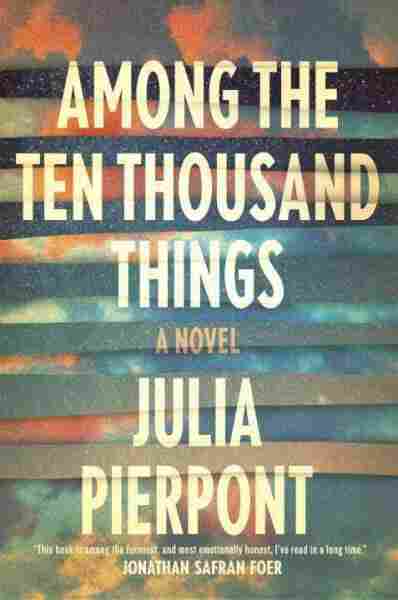 Among the Ten Thousand Things

Talk about opening with a bang: at the beginning of Julia Pierpont's debut novel, Among the Ten Thousand Things, an 11-year-old girl named Kay Shanley enters the lobby of her New York City apartment building. We readers have already been clued into the fact that Kay is the kind of awkward, shy, pre-teen other girls ridicule. We just want her to get safely into her family's apartment and back to watching the Harry Potter movies she loves. But, just as the elevator doors are closing, the doorman signals for her to hold up. He hands her a package addressed to her mom, who's called "Deb".

Kay doesn't even know the meaning of some of the words she sees, but she does get the meaning of the cover note, the obscenely pink thing that lured her in. It's a letter from the "other woman" to Kay's mother and it reads in part: "Dear Deborah, ... I began sleeping with your husband last June. We were together for seven months, ..."

If Pierpont simply took it from there and chronologically traced the fall-out of this terrible knowledge on Kay, her older brother, Simon, and her parents, then Among the Ten Thousand Things would deserve a nod as a closely observed work of domestic fiction. But what sets Pierpont apart from the pack of other accomplished young graduates of elite creative writing programs (she went to NYU) is her storytelling chops.

The chapters that follow that dramatic opening make it clear that there are going to be as many ingenious twists and turns in this literary novel as there are in a top-notch work of suspense like Gone Girl. The effect is dizzying: as a reader you feel, as the Shanley's do, that the earth keeps shifting beneath your feet. Early on, here's how we're told that Jack Shanley — an artist and the dad now in the doghouse — somewhat smugly assumes the future will play out:

His wife would fight with him, really just yell, because who can fight with a spineless thing? A misshapen, regretful thing that curls up and sleeps with white flags waving like windshield wipers. She'd get sick of yelling, of crying. When she cried, Kay cried, Simon cried. They'd speak to him only when his physical presence was an impediment, when he was blocking the refrigerator and they needed him to move. And then they'd be overpolite.

Because Pierpont doesn't want her readers to get caught up solely in the suspense about whether or not Kay's parents will stay together or divorce, she does something nervy right in the middle of this novel: she inserts a glimpse into the future. Then, after our curiosity about the Shanleys is satisfied, we readers are asked to turn our full attention back to those first raw weeks after that box of printed emails arrives. Smart.

Pierpont's gift for off-beat construction and for telling descriptions extends to less weighty scenes as well. There are comic moments scattered around here, mostly via quick wry observations. When, for instance, Deb, a former ballet dancer, heads off to meet a more successful dancer friend, we're told that the two women "were going to lunch because each had been waiting for the other to cancel. Making dates only to call them off was how they kept in touch."

Among the Ten Thousand Things may deal with that familiar staple of fiction — unhappy families — but it does so in such unexpected ways that it's a fresh pleasure to read. In fact, it's such a pleasure that you almost forget that everyone you care about in this novel is miserable.

Read an excerpt of Among the Ten Thousand Things