Accessibility links
In Helping Those With Disabilities, ADA Improves Access For All Take a tour through New York and you'll see how the 25-year-old Americans with Disabilities Act is benefiting everyone.

When the Americans with Disabilities Act (ADA) became law 25 years ago, "everybody was thinking about the iconic person in a wheelchair," says civil rights lawyer Sid Wolinsky. Or that the ADA — which bans discrimination based on disability — was for someone who is deaf, or blind. 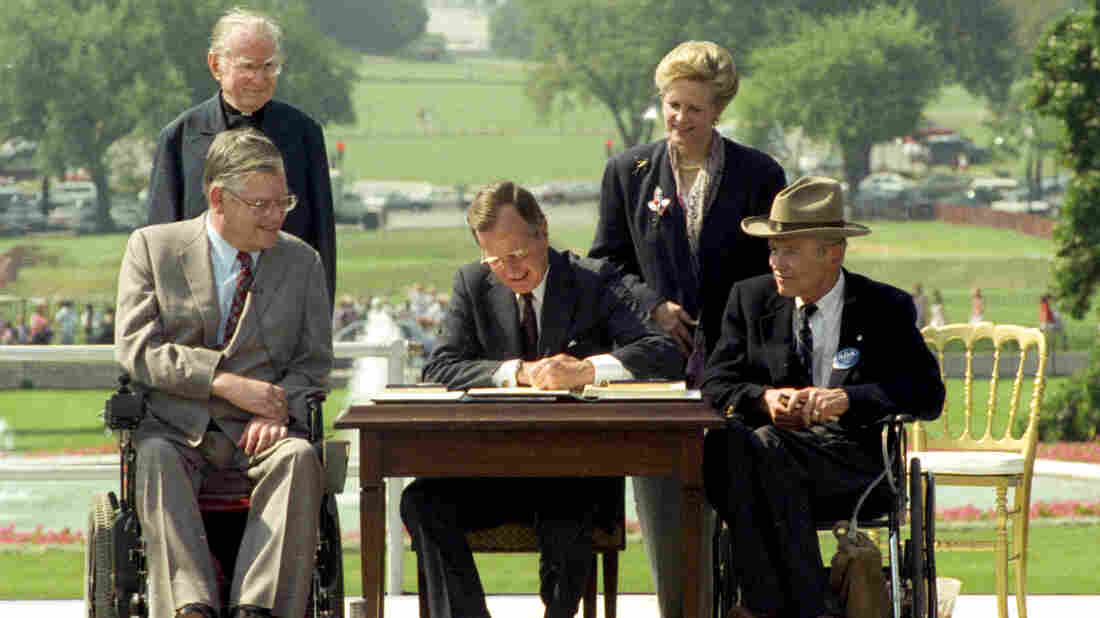 President George H.W. Bush signed the Americans with Disabilities Act on the South Lawn of the White House on July 26, 1990. "Let the shameful wall of exclusion finally come tumbling down," he said that day. Barry Thumma/AP hide caption 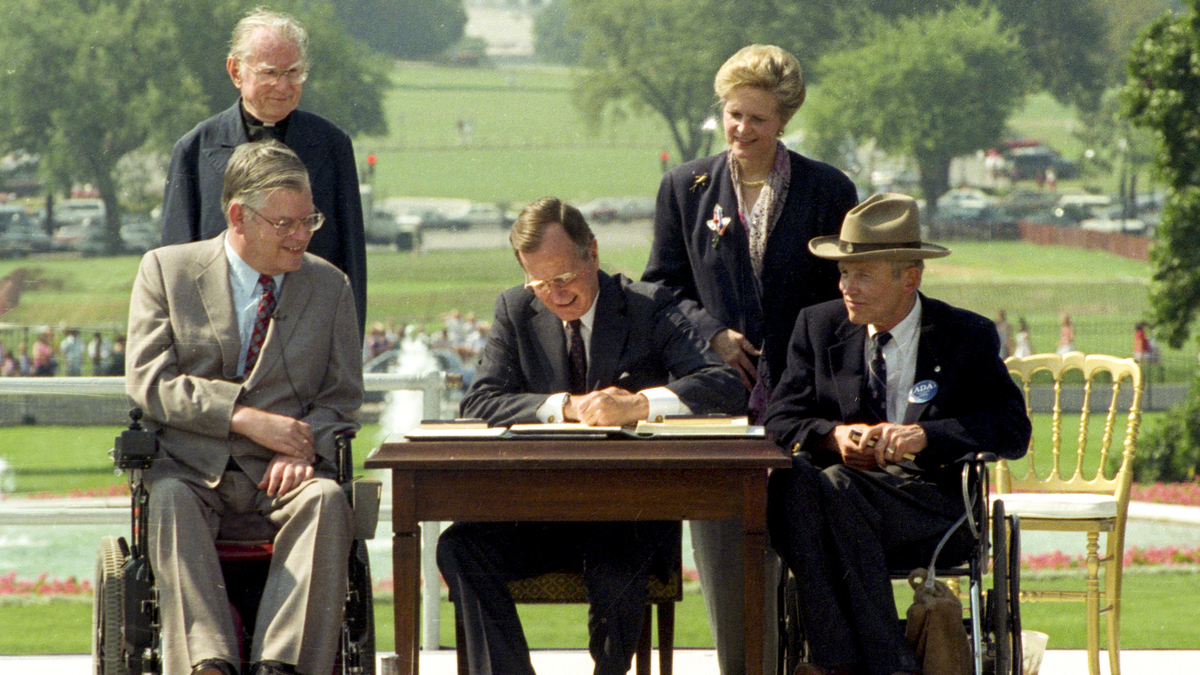 President George H.W. Bush signed the Americans with Disabilities Act on the South Lawn of the White House on July 26, 1990. "Let the shameful wall of exclusion finally come tumbling down," he said that day.

At this subway station at the northern tip of Manhattan, Wolinksy — who is joined by Jim Weisman, an attorney with the United Spinal Association — points to the elevator that was added after they sued the city in November 2013. Now, wheelchair users can get to the platform.

On this day, the elevator is in constant use, gliding up and down, the doors opening with a ding as people use it instead of climbing the steep stairs nearby.

But Dustin Jones, a wheelchair user who joins us, notes: "I have not seen a person with a disability yet ride that elevator. It's all been walking people."

Over the course of an hour, no one — other than Jones — is in a wheelchair. Jones watches a mother get on, holding the hand of one young child and pushing a baby in a stroller, while carrying bags.

"This is one of those stations where it would be really tricky to navigate a small child, a small baby with the stroller and bags, if you had to solely use the steps," he says.

Weisman, a veteran of accessibility lawsuits, also doesn't see any people with any visible disabilities enter the elevator.

"This elevator is a gift from the disability community and the ADA to the nondisabled people of New York," says Wolinsky, who co-founded Disability Rights Advocates. 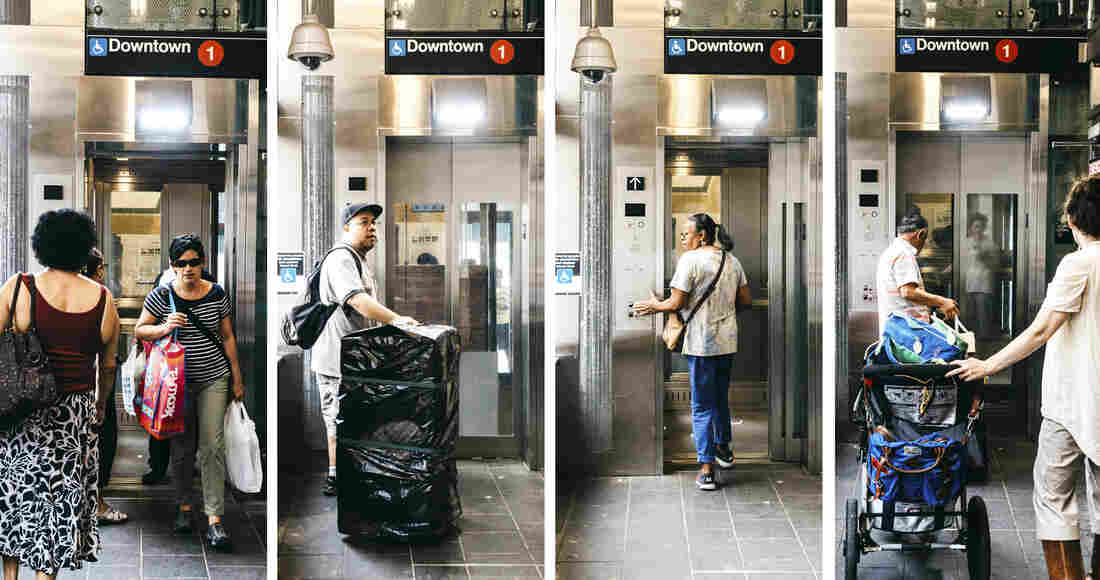 The elevator at the Dyckman Street Subway Station in Inwood, Manhattan, helps people of all abilities reach the platform. Michael Rubenstein for NPR hide caption 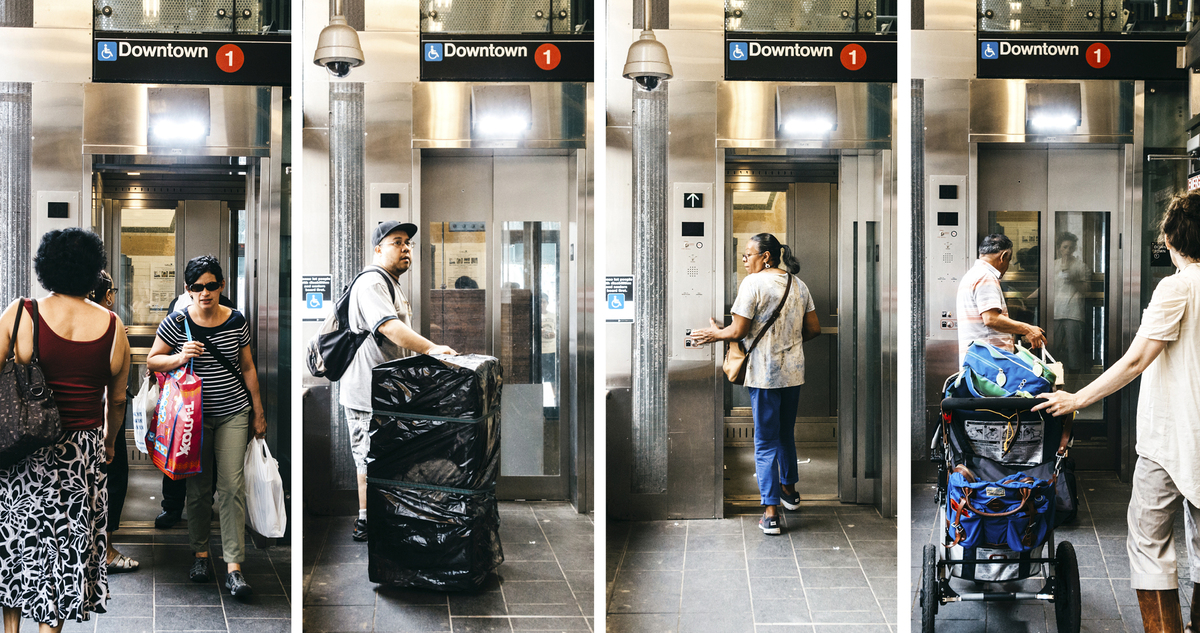 The elevator at the Dyckman Street Subway Station in Inwood, Manhattan, helps people of all abilities reach the platform.

The ADA, which was signed into law on July 26, 1990, banned discrimination based on disability in employment. It also required access to government services and public accommodations, and included a rule that public transportation be made accessible.

That means adding an elevator to a major subway station, or including elevators when building new stations, or adding one when there's a substantial renovation at a station.

So when the Dyckman Street Station was renovated, the lawyers sued to have an elevator included. It can sometimes be expensive to provide access. In this case, the tricky work of installing the elevator at an old station located on a rocky cliff cost about $7 million, or a little more than 20 percent of the overall cost of the renovation. And that was just for one elevator, to the downtown trains only.

NPR analyzed transit systems in New York and 16 other cities across the country. In New York, only 21 percent of subway stations are accessible. That's the highest percentage of inaccessible stations of any system in the country. New York's subway has the nation's highest number of riders, but most of the city's current stations were built before 1940, long before wheelchair accessibility became an issue.

Kevin Ortiz, a spokesman for New York's Metropolitan Transportation Authority, notes that the system has made progress, and has committed hundreds of millions of dollars on a promise to make 121 stations wheelchair accessible by 2020. That would bring up the percentage of accessible stations in the city to roughly 25 percent. In addition, Ortiz says, "every single one of our 5,700 buses is accessible," another change mandated by the ADA.

The NPR analysis found that older transit systems remain the least accessible. After New York's subway system, the system with the lowest number of accessible stations is the Philadelphia metro area's commuter rail system, at 43 percent.

In other systems, newer subway stations, including any built after the ADA, are accessible. The stations in the transit systems in the Washington, D.C., metro area, Los Angeles, Dallas, Portland, Oregon and Denver are 100 percent accessible, according to the NPR numbers.

"When Hurricane Sandy hit, I was here, in my apartment," says Melba Torres, 53, who lives at this red-brick public housing complex on Manhattan's Lower East Side. "I live on an eighth floor, and I was not able to be evacuated."

When the October 2012 storm knocked out power to her building, the elevator shut down. She has cerebral palsy, and her power wheelchair weighs a few hundred pounds. Like thousands of people in high rises around the city, she was stuck.

Torres stayed in her apartment for six days without power.

"It's the fear of not knowing what could happen. It was totally dark. I don't like darkness," she says. 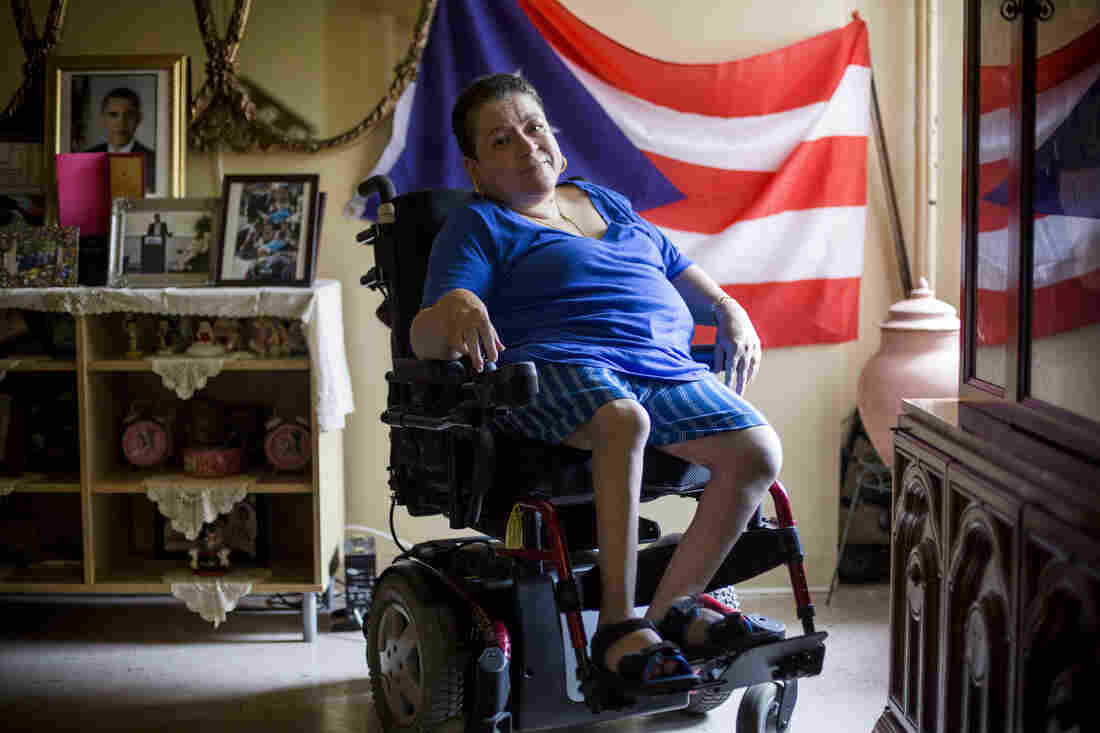 When the power went out during Superstorm Sandy, Melba Torres was trapped in her eighth-floor apartment on the Lower East Side of Manhattan for several days without access to a working elevator. Adam Wolffbrandt/NPR hide caption 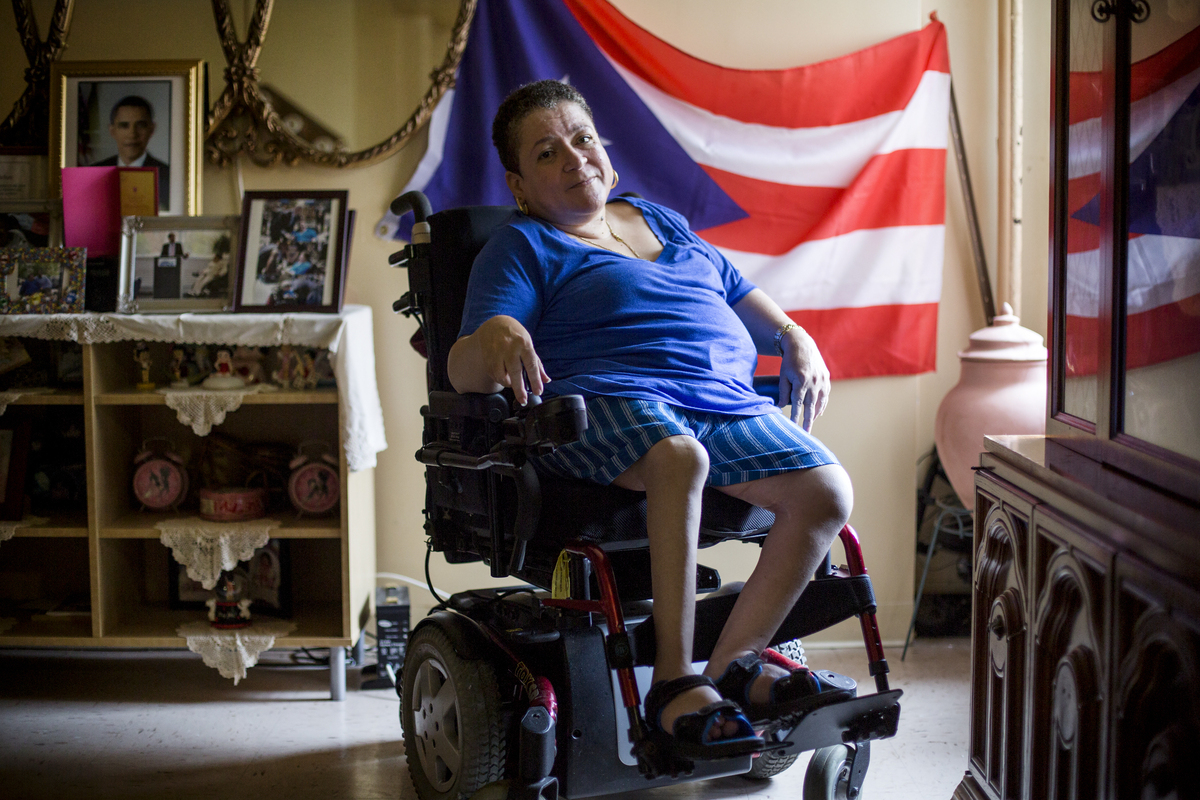 When the power went out during Superstorm Sandy, Melba Torres was trapped in her eighth-floor apartment on the Lower East Side of Manhattan for several days without access to a working elevator.

In the daylight, as the storm surged, she looked out her window and watched the water rising in the nearby East River.

For a person with a disability, losing electricity isn't just an inconvenience — it can be a matter of life and death. Some people with disabilities lost power to home dialysis machines, or even to portable respirators that helped them breathe.

"Everything that I use to live on: my chair, my device to get in and out of bed," she says. "My bed is electric."

Torres also depends on her elderly mother, who lives down the block. But her mother couldn't walk up the eight flights of stairs to help. "My mom was very frightened for me," says Torres. "She's in her 70s and she has her own health issues, and she refused to go to a shelter knowing that I was here."

Wolinsky sued the city on behalf of people like Torres and her mother.

In 2013, one year after the storm, a federal judge ruled in their favor.

Susan Dooha, who runs the Center for Independence of the Disabled, New York — which was a plaintiff in the lawsuit — notes that the new disaster plan now takes into account not just people with disabilities and the elderly, but also people who are injured during a disaster.

"People who are hurt on the day of a disaster may need evacuation assistance," she says.

Stop 3: The Streets Of Lower Manhattan

Dan Carione walks a street in Lower Manhattan where he used to patrol.

Then, as a result of a a shootout, Carione lost part of his hearing.

The police department paid for his hearing aid, but then forced Carione, a deputy inspector, to retire. Police officials told him he couldn't be a police officer with partial hearing.

Carione didn't think of himself as someone with a disability. The hearing aid was small, and with it, he heard well. 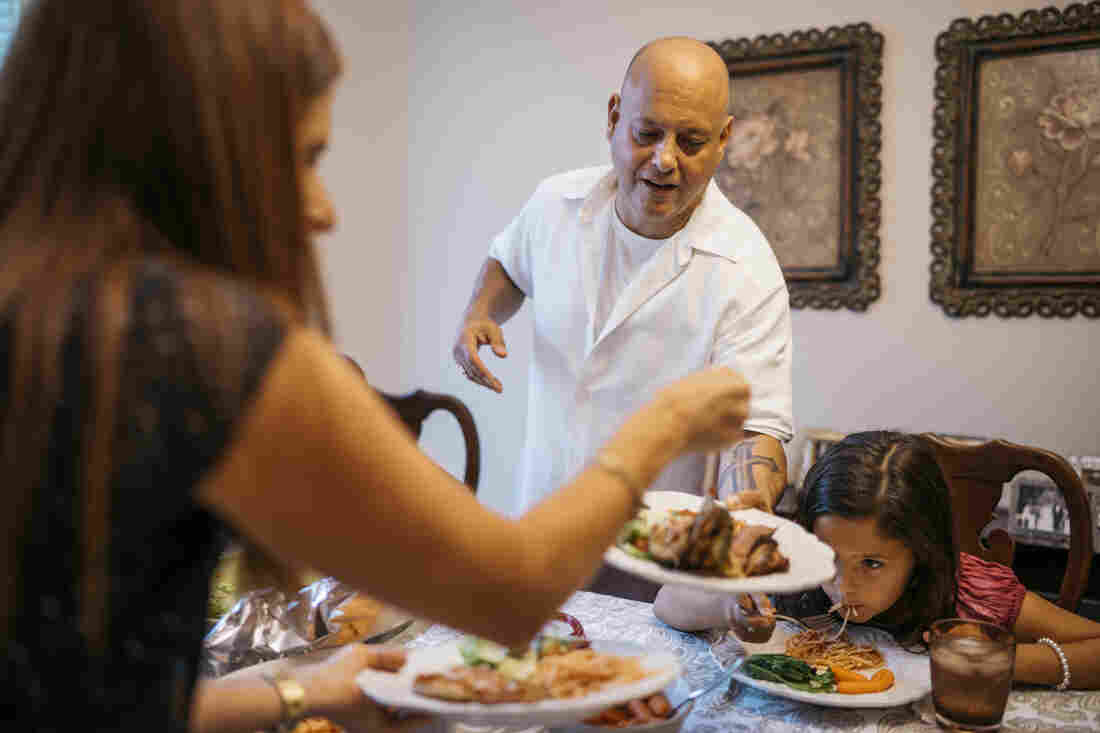 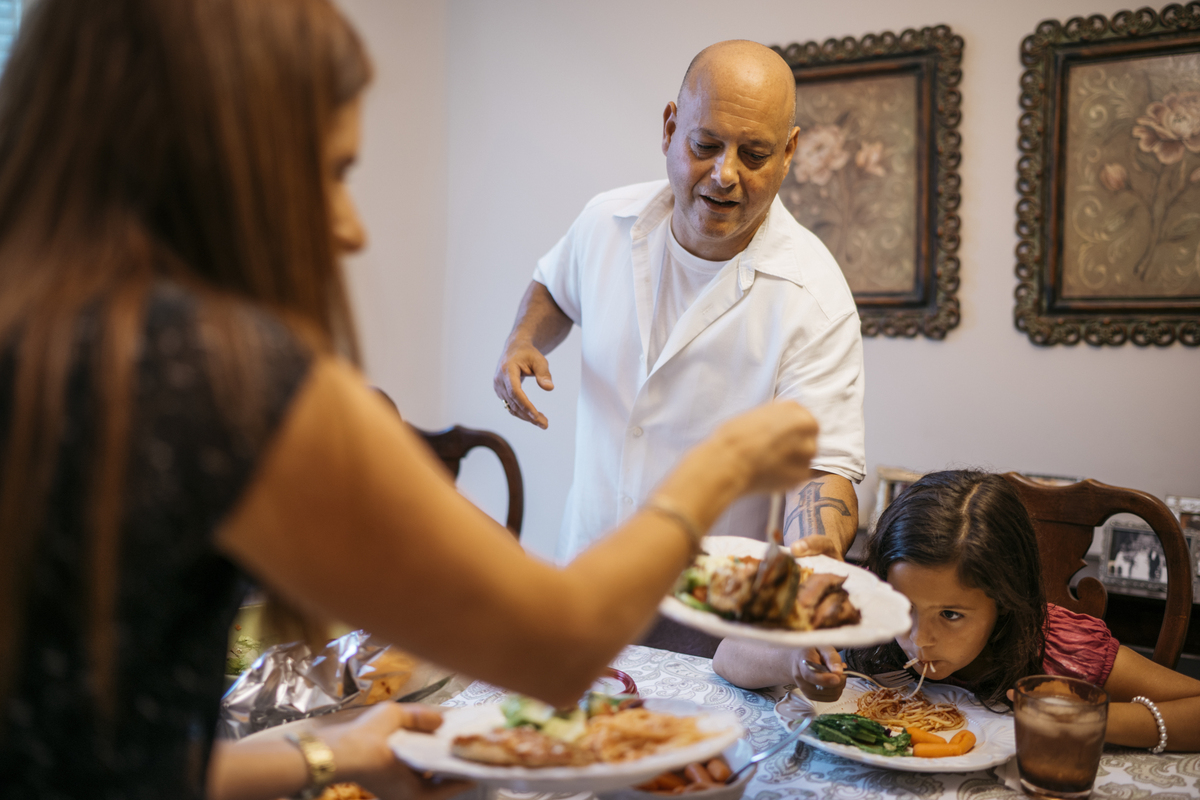 Jennifer Carione puts food on Dan Carione's plate while their daughter Sophia eats dinner at their home in Brooklyn, N.Y.

Carione sued, using the ADA. He argued that, with his hearing aid, he could do his job as well as or better than before. In March, the city settled, and recently, Carione, who is 48, went back to work. Now New York will set new rules for letting police use hearing aids.

"The ADA offers protection for everybody," says Wolinsky, who sued on behalf of Carione. "In fact, this is an enormous group of Americans — people who don't define themselves as disabled. The person who's in their 80s and moving really slowly, and can't manage a flight of steps, doesn't think of themselves as disabled — they're just a little older. A person with a mild case of arthritis, a person who can't manage a heavy suitcase when they're traveling — those are the people who are being helped by the ADA, and it's a large and growing population."

That's clear from U.S. Census Bureau numbers. About 1 in 5 Americans has a disability. And the number keeps going up as people age: About 40 percent of people 65 or older report they have one or more disabilities.