Accessibility links
Retracing Ralph Waldo Emerson's Steps In A Now 'Unchanged Eden' A century and a half ago, the poet and philosopher headed to New York's Adirondack Mountains with some notable pals. Today, we follow his journey with a new crew, the help of a painting and a book. 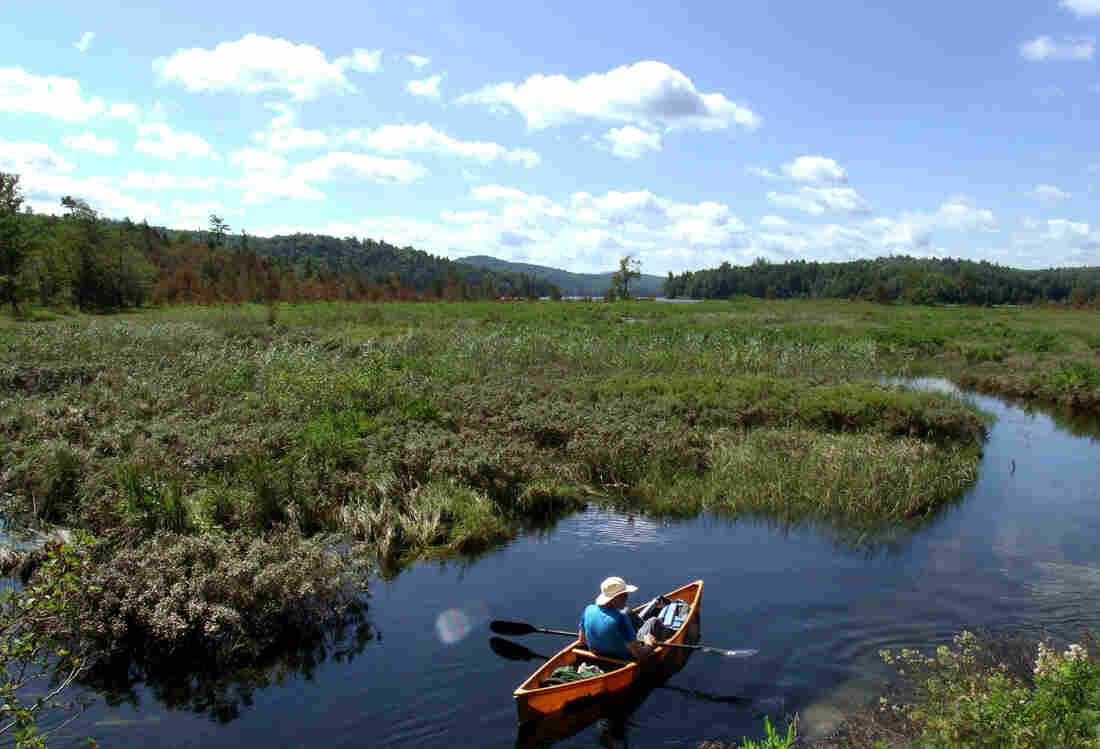 Author and activist Bill McKibben paddles toward Follensby Pond in New York's Adirondack Mountains, along the route followed by Ralph Waldo Emerson in the summer of 1858. Julia Ferguson/NCPR hide caption 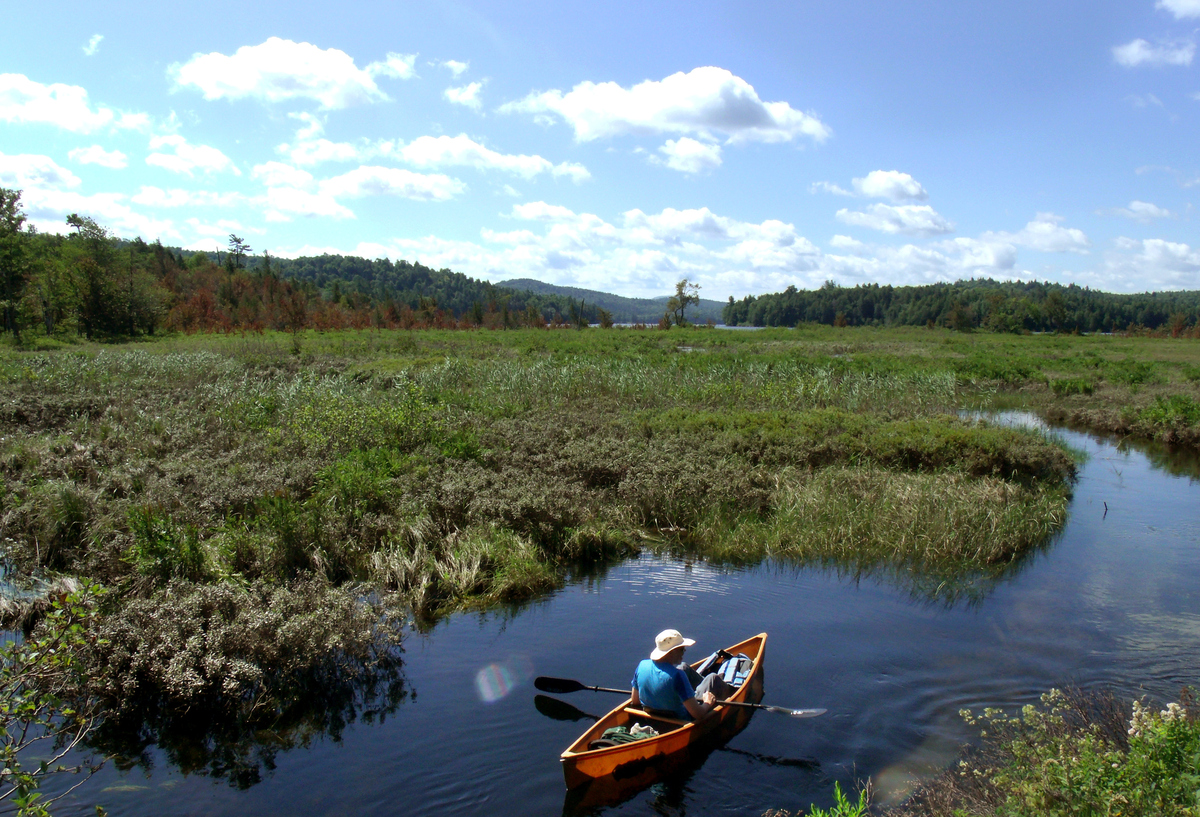 Author and activist Bill McKibben paddles toward Follensby Pond in New York's Adirondack Mountains, along the route followed by Ralph Waldo Emerson in the summer of 1858.

It's high summer, and for a lot of us that means it's time to go camping. This summer, we're celebrating one particular camping trip.

Way back in 1858, Ralph Waldo Emerson, the great philosopher and poet, set out into the Adirondack Mountains in New York. On the famous journey, he took with him some of the most famous artists, scientists and thinkers of his day.

This year, I set out early in the morning in my canoe with a company of my own: environmental activist and writer Bill McKibben and our guide, Mike Carr with the Nature Conservancy. 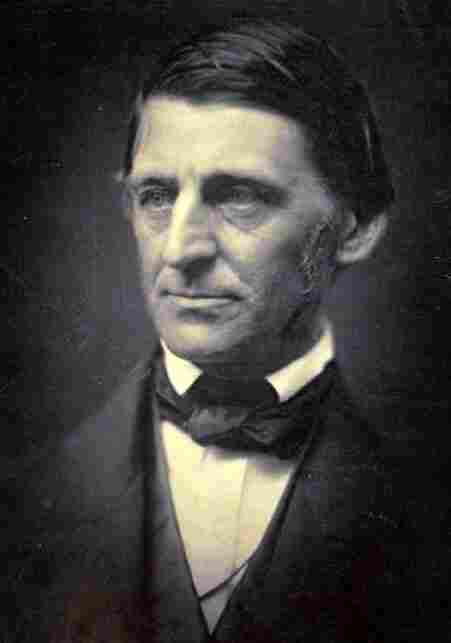 Our idea is to paddle, as closely as possible, the route Emerson and a bunch of his friends took 157 years ago.

"They came down through Stony Creek Ponds, just upstream, and floated down the Raquette," Carr says.

Emerson was in his 50s when he made the trip, already a famous poet and essayist. He came from Boston when the Adirondack Mountains were still really remote, a howling wilderness north of Albany. Getting here took days of travel by train, wagon and boat.

On this day, it feels like nothing much has changed. We drift the current down the big river under white pines as tall and straight as ship masts.

We see a beaver and an otter creasing the water. McKibben points out an eagle sweeping ahead of us.

Emerson's journey here was famous even while it was going on. The newspapers found out what he was up to and people started calling it the "Philosopher's Camp."

The party included one of the great scientists of the day, a guy named Louis Agassiz, and a lawyer named Ebenezer Hoar, who would later serve as U.S. Attorney General.

They passed through this vast meadow that links the Raquette River to Follensby Pond where they planned to make camp.

It's so quiet, we can hear the wind as it lays the grass side to side.

"That play of water and pickerel lily and grass and big pines on the edge — it's magnificent," McKibben says. 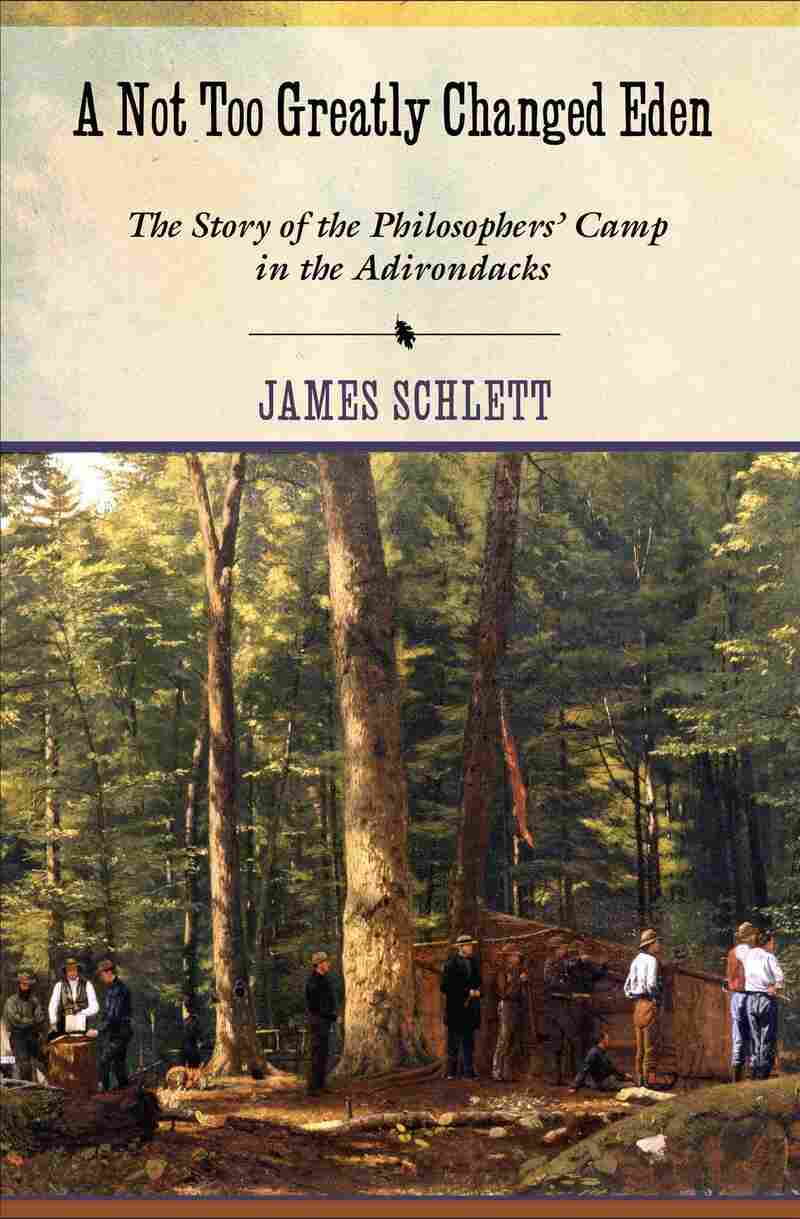 The book A Not Too Greatly Changed Eden inspired the trip to re-trace Emerson's steps to get to the Philosopher's Camp. Cornell University Press hide caption

The next hour, we cross the open reach of the lake.

One of the men on Emerson's trip was a painter, William James Stillman. He painted the scene of the Philosopher's Camp, with Emerson standing at the middle and Agassiz off to one side, dissecting a trout.

Using Stillman's painting as a guide, we're able to hone in on the low-rise where they camped, wading ashore through bog laurel and lilies.

Bushwhacking through the woods, Bill McKibben and Mike Carr find the spring where Emerson drank and the huge boulders that may be the ones in Stillman's painting.

"We're used to thinking of sort of spiritual pilgrimages or we go to Fenway Park or, you know, or we have these historical pilgrimages where we go off to a battlefield or something," McKibben says. "But what we come here to remember is this particular spark of intellectual energy."

The reason we followed Emerson's journey this summer is that a new book, A Not Too Greatly Changed Eden, has been published about the Philosopher's Camp and the men who gathered here.

The writer, James Schlett, meets us at the lake. He says Emerson wasn't really much of an outdoorsman — he preferred his nature in small doses, in gardens and farm fields.

But the poet wound up loving this place.

"It was a very meditative moment," Schlett says, "just Emerson there standing among these giant trees, taking it in in the quiet, away from the rabble of the camp."

This may be the biggest legacy of the Philosopher's Camp. This was the moment when one of our deepest thinkers on nature and the spirit took his deepest dive into a truly wild place, one that still boasted wolves and bears and mountain lions.

In his poem about the trip, called Adirondac, Emerson sounds melancholy about leaving:

The holidays were fruitful, but must end;
One August evening had a cooler breath;
Into each mind intruding duties crept;
Under the cinders burned the fires of home;
Nay, letters found us in our paradise:
So in the gladness of the new event
We struck our camp and left the happy hills.
The fortunate star that rose on us sank not;
The prodigal sunshine rested on the land,
The rivers gambolled onward to the sea ...

It sounds like what we all think when we're on a great camping trip that we don't want to end.

The Nature Conservancy bought Follensby Pond seven years ago. It isn't yet open to the public and it's unclear when that might happen.

What is certain is that this place where Emerson paddled out to look at the stars will stay wild and undeveloped forever.