Accessibility links
Interview: Filip Bondy, Author Of 'The Pine Tar Game' In the 1983 game, the Yankees were holding a trump card: an obscure rule that turned the Royals' game-winning home run into a game-loser, inspiring one of the most epic tantrums in baseball history. 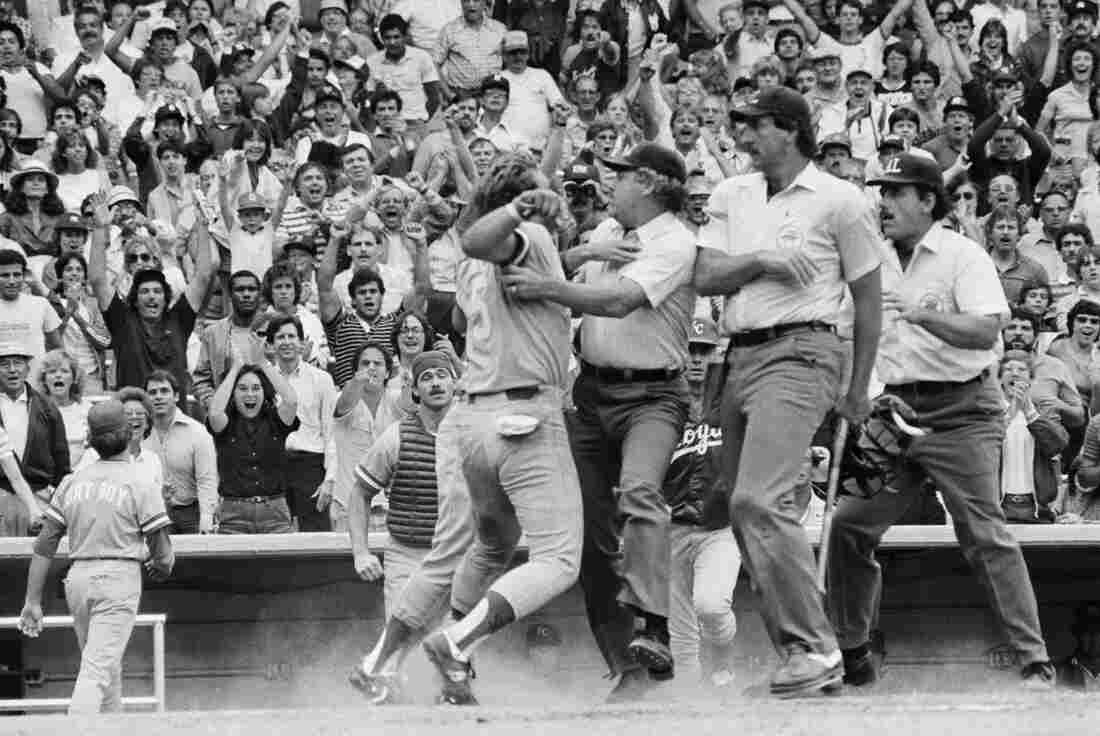 George Brett argues with the umpires who ruled out his two-run homer after an examination of his bat showed that the pine tar had exceeded the allowable area. "Nobody has ever exploded like that," sportswriter Filip Bondy says of Brett's famous fit. Bettmann/Corbis hide caption 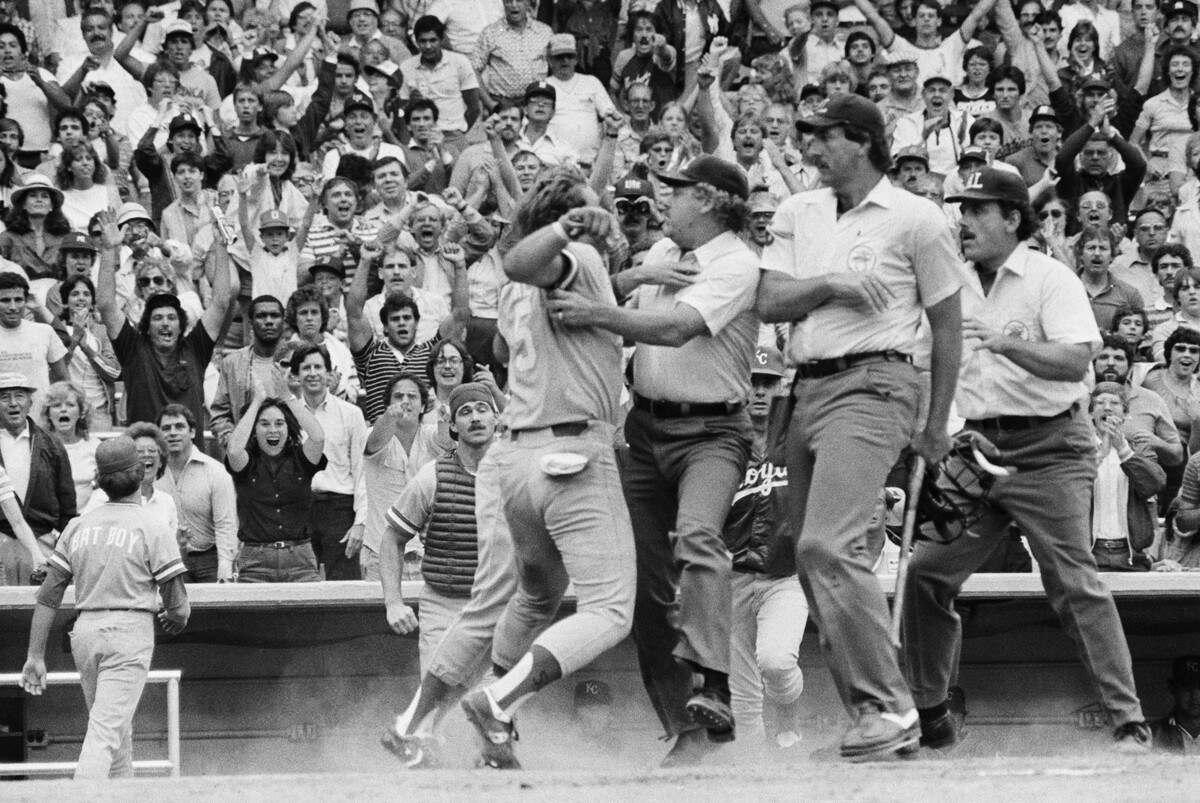 George Brett argues with the umpires who ruled out his two-run homer after an examination of his bat showed that the pine tar had exceeded the allowable area. "Nobody has ever exploded like that," sportswriter Filip Bondy says of Brett's famous fit.

A game-winning home run becomes a game loser — and 25 days later, it's turned back into the game-winner.

That alone would warrant an entry in baseball's history books.

But cast it with David and Goliath, include a temper tantrum of epic proportion, and hinge it all on an obscure old rule — and you've got the infamous Pine Tar Game.

That 1983 game between the New York Yankees and the Kansas City Royals is recounted in a new book by New York Daily News sports columnist Filip Bondy.

The Context: Rivalries And Rules

Back in the late '70s and early '80s, Bondy was covering the Yankees, and he says the Royals and the Yankees actually had a bit of a rivalry. The two teams kept meeting and clashing in the playoffs, where four years out of five they faced off for a berth in the World Series. 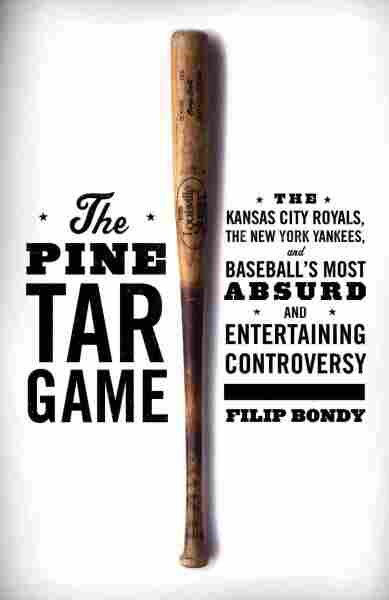 The Kansas City Royals, the New York Yankees, and Baseball's Most Absurd and Entertaining Controversy

The Yankees usually won, but the Royals were very good. Their star was a third baseman named George Brett.

Brett had a favorite bat: a particularly well-made Louisville Slugger with a handle covered in pine tar. He didn't like batting gloves, so the pine tar allowed him a better grip on the bat.

But there was a catch: an old rule banned pine tar from going up more than 18 inches on the bat. Not because pine tar is advantageous, Bondy says — but because pine tar smudges were ruining baseballs, and the owners didn't like having to frequently replace them.

"The only reason it was high up on ... George Brett's bat was because Brett had a habit of massaging his bat with his hands," Bondy says. "And the pine tar just kept getting higher and higher on his bat. But it was not affecting the flight or the distance of the batted ball."

On July 24, 1983, the Royals were at the end of a four-day series in New York against the Yankees. The Yankees held a one-run lead going into the ninth inning, and the Royals were up to bat.

With two outs, the Yankees gave up a single. With that, it was Brett's turn to bat.

Pitching was Goose Gossage, the Yankees' star reliever. With the crowd holding their breath, Brett fouled off the first pitch deep in to left field.

The second pitch he wouldn't miss. It was an easy home run, deep into the right field stands. A two-run homer put Kansas City up 5-4. 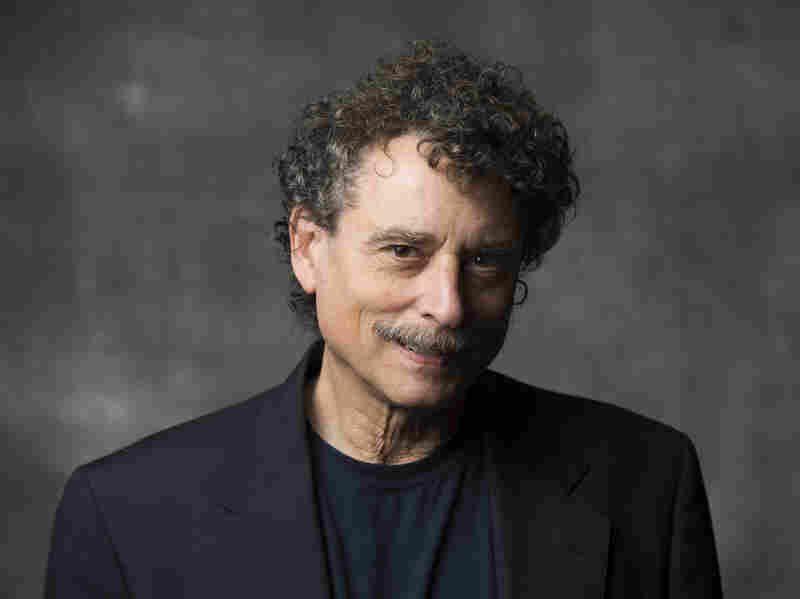 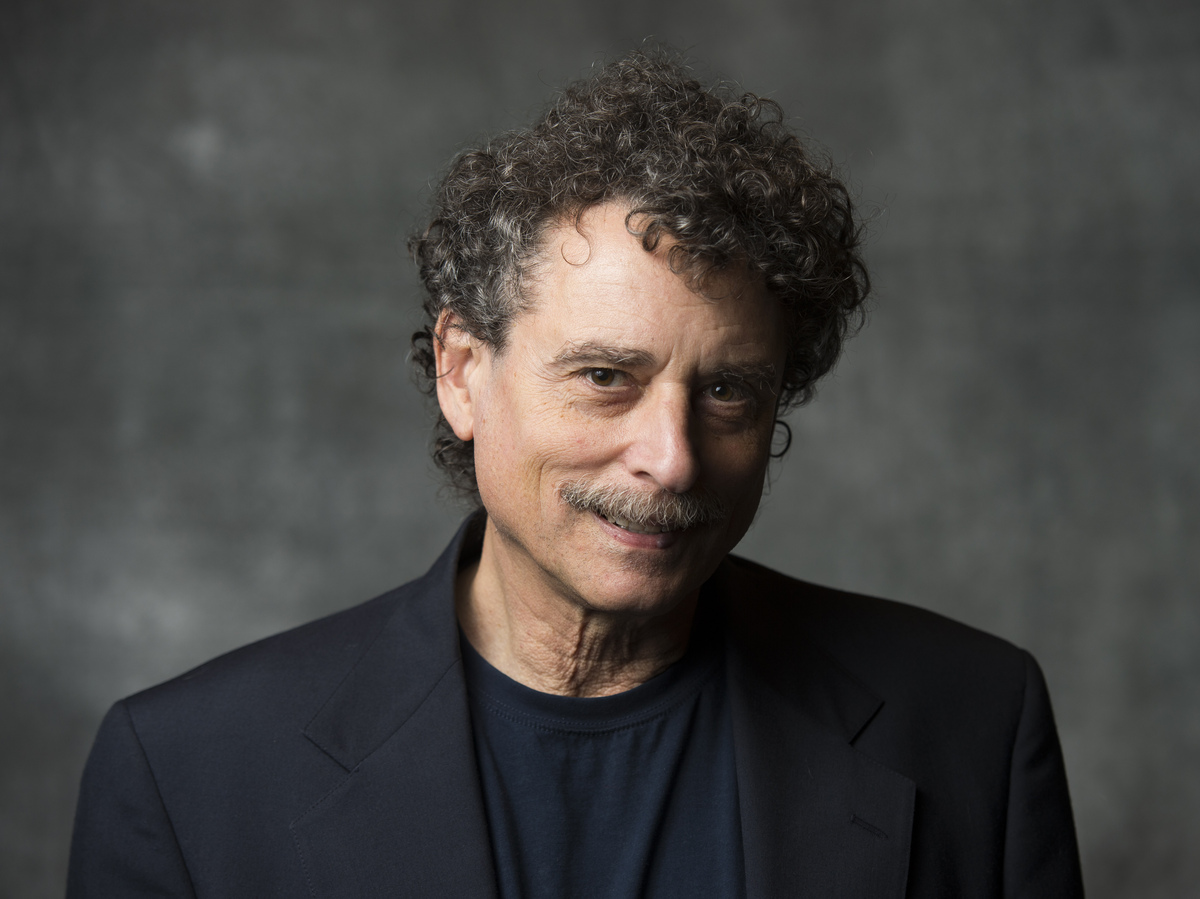 Filip Bondy has been a sports columnist for the New York Daily News for more than 20 years. His other books include Tip Off and Who's on Worst?

"So he rounds all the bases, he comes back home. The Royals are celebrating in the dugout. Brett takes his seat in the dugout. But then, stuff happened," Bondy says with a laugh.

The Yankees had been tipped off about George Brett's bat. And they'd been waiting for a moment exactly like this to play their trump.

"Suddenly, [Yankees manager] Billy Martin is out there talking with the umpires, and the next thing we see is they're measuring the bat against home plate," Bondy remembers. "And the reason they're doing it is they don't have a measuring stick, but they know that home plate is 17 inches wide, and that this bat sure looks like it's been pine tarred a lot more than that."

In the broadcast, Yankees announcers Bobby Murcer and Frank Messer, along with the crowd, explode with excitement as the umpire gives the signal that Brett is out.

And Brett explodes, too. He came tumbling out of the dugout, arms flailing and his face getting redder and redder with each step as he sprinted toward home plate.

"That is what I remember as much as anything, are the arms, flapping flapping flapping," Bondy laughs. "And then I remember the headlock that [umpire] Joe Brinkman put on him from behind. Brett was just basically spitting curses. Nobody has ever exploded like that."

A group of four Royals and the umpire Brinkman had to pull Brett backward as he yelled, brows furrowed and breathing hard.

Another Royal absconded with the bat, darting into the dugout chased by a Yankee security guard.

All the while, the crowd was cheering wildly. The Yankees appeared to have won the game 4-3. Frank Sinatra's "Theme From New York, New York" blasted victoriously over the stadium loudspeakers. 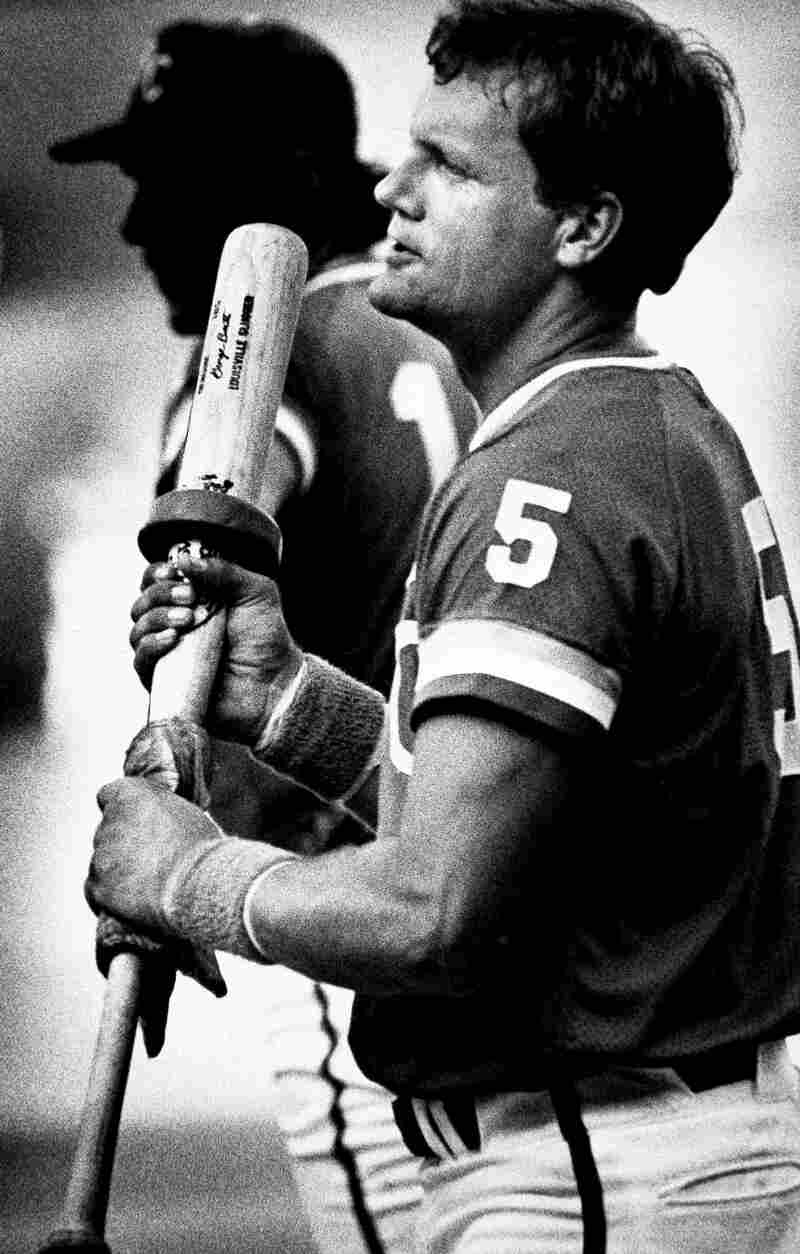 George Brett wipes a new bat down with a pine tar rag before a game with the Cleveland Indians on July 25, 1983. The day before, Brett had been called out for using a bat with pine tar too far down the bat; the league president decided that Brett's bat was OK. Doug Atkins/AP hide caption 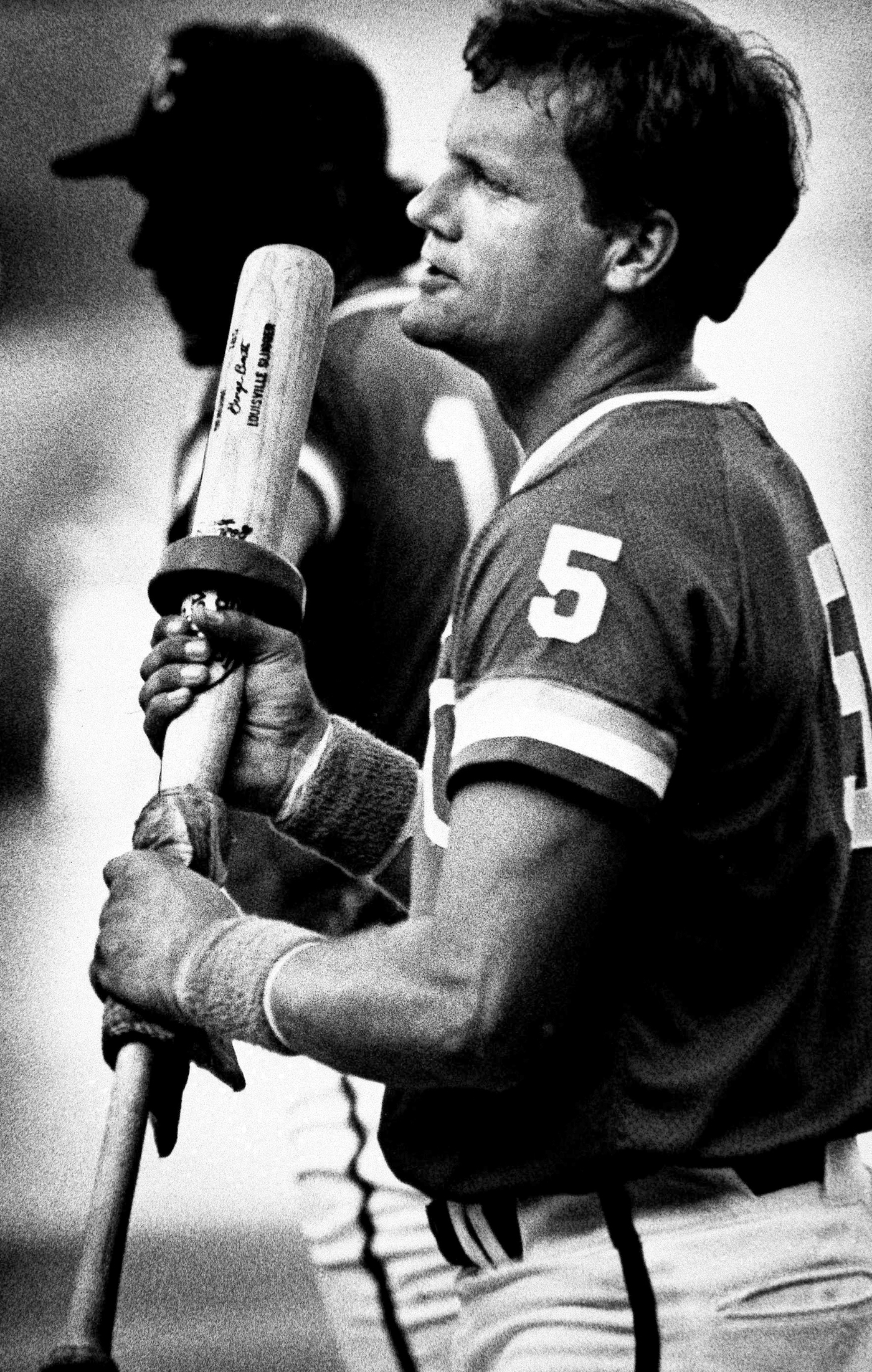 George Brett wipes a new bat down with a pine tar rag before a game with the Cleveland Indians on July 25, 1983. The day before, Brett had been called out for using a bat with pine tar too far down the bat; the league president decided that Brett's bat was OK.

The Aftermath: A Win And Wistful Memories

The Royals protested the game to the American League office, where the league president, Lee MacPhail, upheld their protest. He reinstated the home run and ordered that the game restart from that point — the Royals up 5-4, with two outs in the top of the ninth inning.

"He decided that it was [a] ridiculous rule. If the pine tar did not really affect the flight or distance of a baseball, then it shouldn't be considered an out," Bondy says. "It was only fair that that home run be a home run."

On a day off, the Royals flew to New York to finish the game. When gameplay resumed in earnest, it was over in just eight minutes. The Royals had won the Pine Tar Game, as the announcers were already calling it, by a score of 5-4.

Bondy remembers the game fondly. Today, he says, cheating in baseball has a different meaning. It means steroids, performance-enhancing drugs. Or it means the Cardinals hacking into the Astros' internal database. That, he says, makes him want to turn his TV off.

"So we tend to smile at it, and think of it as this wacky, funny, episode in baseball history."