Accessibility links
Beneath Alaskan Wildfires, A Hidden Threat: Long-Frozen Carbon's Thaw As millions of acres of forests burn across the state this summer, there's growing concern about what impact that might have on permafrost — and how melting permafrost might affect climate change. 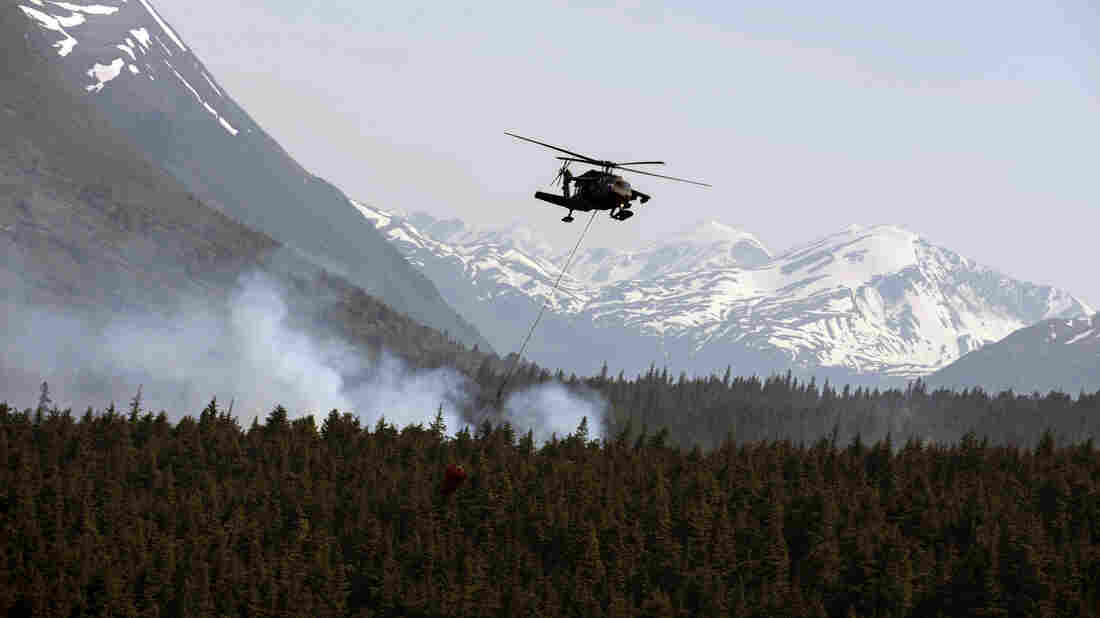 Some of Alaska's wildfires are dramatic: flames, vast plumes of smoke and firefighting battles. Here, on June 17, a helicopter releases hundreds of gallons of water onto the Stetson Creek Fire near Cooper Landing, Alaska. But even fires that look far quieter, like they're all burned out, can continue to smolder underground — and pose a dangerous threat to permafrost. Sgt. Balinda O'Neal/U.S. Army National Guard/AP hide caption 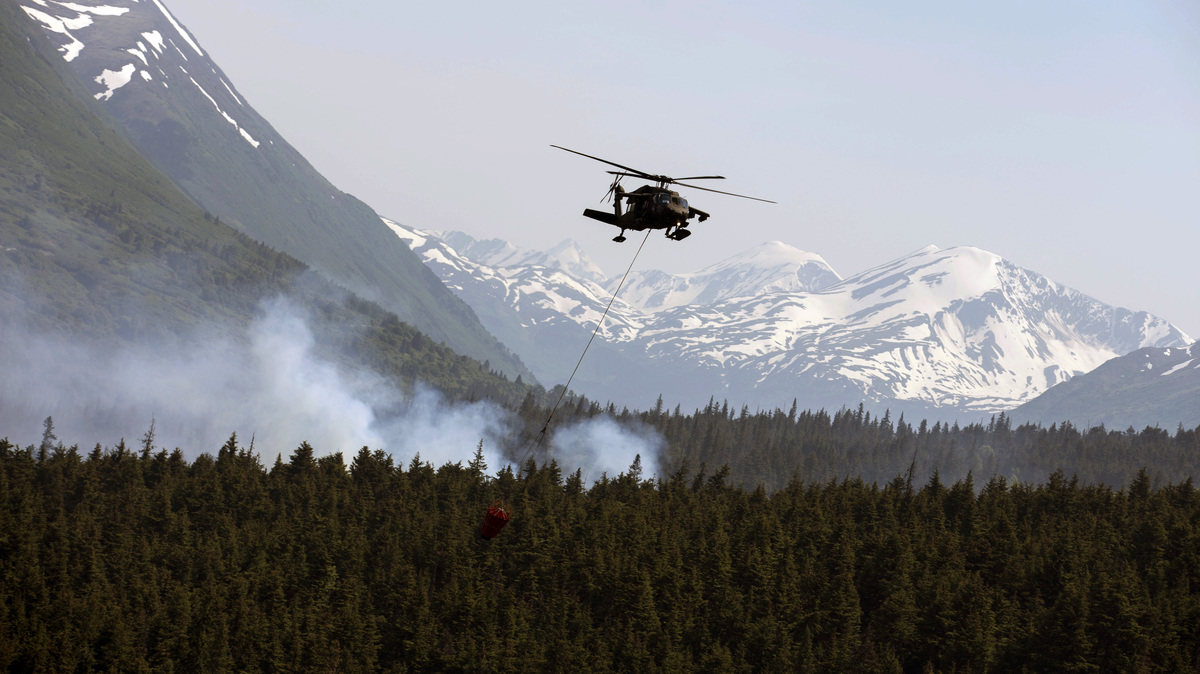 Some of Alaska's wildfires are dramatic: flames, vast plumes of smoke and firefighting battles. Here, on June 17, a helicopter releases hundreds of gallons of water onto the Stetson Creek Fire near Cooper Landing, Alaska. But even fires that look far quieter, like they're all burned out, can continue to smolder underground — and pose a dangerous threat to permafrost.

The Fish Creek Fire in Interior Alaska isn't much to look at. It's about 7,500 acres in size, sitting about an hour south of Fairbanks near the twisty Tanana River. The main fire front — the made-for-TV part, with torching trees and pulses of orange heat — flamed out more than a week ago, leaving behind a quiet charred landscape.

But the fire is far from over. It's one of nearly 300 fires still burning in Alaska, after a spectacular lightning storm late last month sparked hundreds of blazes and a wave of fire larger than any in the state's history — nearly 5 million acres in total.

And though the Fish Creek Fire looks benign, with little wisps of white smoke as its only sign of life, it's not.

A little fire like this could have a huge impact on the surrounding environment and ecosystem — not just here in Alaska, but across the planet.

"It's really a different kind of fire," says Teresa Hollingsworth, a research ecologist with the U.S. Forest Service. 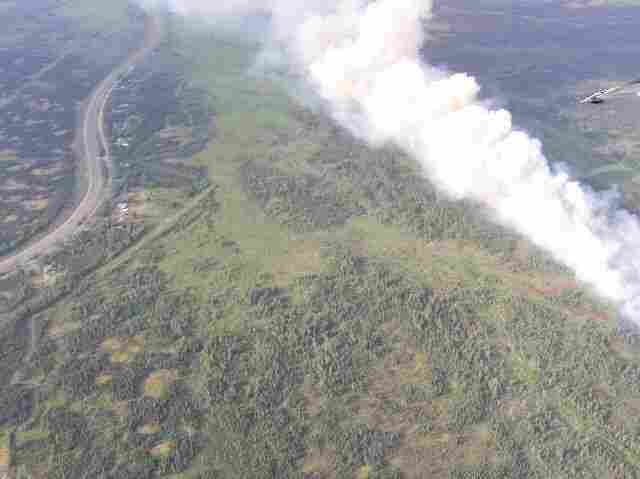 The most visible parts of the Fish Creek Fire — shown here on June 21 — flamed out more than a week ago. But the fire continues underground, burning hidden layers of organic material that never decomposed. Alaska Division of Forestry hide caption 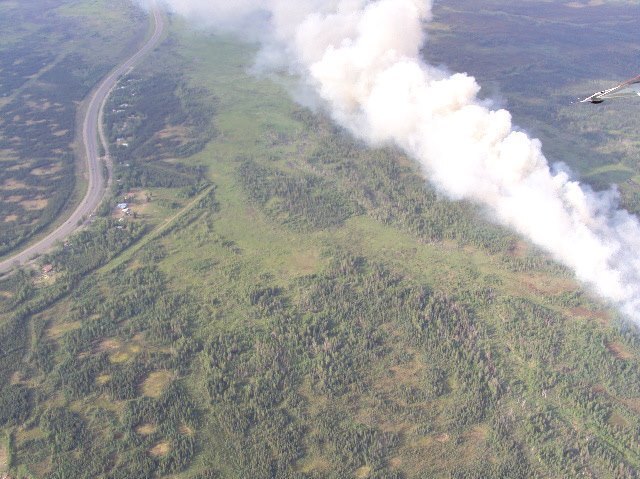 The most visible parts of the Fish Creek Fire — shown here on June 21 — flamed out more than a week ago. But the fire continues underground, burning hidden layers of organic material that never decomposed.

The Fish Creek Fire is mostly done burning the trees and brush above ground and has moved on to the organic matter underground — organic matter that goes, Hollingsworth says, "meters and meters deep."

That's why fires in the higher latitudes, in places like Alaska, are different than other wildfires. Here, Hollingsworth explains, the vegetation above ground is just the tip of the iceberg.

There are layers and layers of organic material called duff — things like pine needles, grasses and trees — that have fallen and accumulated on the forest floor over time. They haven't fully decomposed, like they would in a place like Florida, because of the frigid temperatures.

In places, the duff can pile up to be feet deep.

Below that duff, there's permafrost — which, as the name implies, is permanently frozen ground. It can include dirt, rocks and water, as well as trees, twigs and mammoth bones.

The result, Hollingsworth says: There can be way, way more organic material, or biomass, below ground than there is above.

And all of that biomass is made up of carbon — the same carbon that's a leading cause of climate change.

That's why ecologists and climatologists are watching this year's fire season with so much interest.

Roughly 4.7 million acres of boreal forest and land have burned in Alaska this summer. Millions more have burned in Canada, where scientists estimate half of the land is underlaid with permafrost.

Wildfires In Canada And Alaska Drive Thousands From Homes

In total, more than 11 million acres have burned between the two places — an area roughly the size of Connecticut.

Fires in the subarctic are nothing new. The vast majority of the land burned by wildfire in North America every year is in Alaska and Canada, far from cities and towns.

Still, Alaska has never seen that much fire so early in its fire season. And many of those fires are burning with greater intensity.

That's worrying to research ecologists like Ted Schurr, a professor at the University of Northern Arizona who spends his summers in Alaska studying permafrost.

"It's understood that there's about twice as much frozen carbon [in permafrost] as there is in the atmosphere, to the tune of about 1,700 billion tons of carbon stored frozen," he says.

Put in context, he says, there's maybe another 2,000 billion tons of carbon stored in soil and vegetation in the rest of the world.

"The Arctic and the boreal regions are a hotspot of carbon that's stored in the biosphere that has some vulnerability of ending up in the atmosphere as the climate changes," Schurr says.

One of the more rapid ways a climate or ecosystem can change, he says, is through fire. 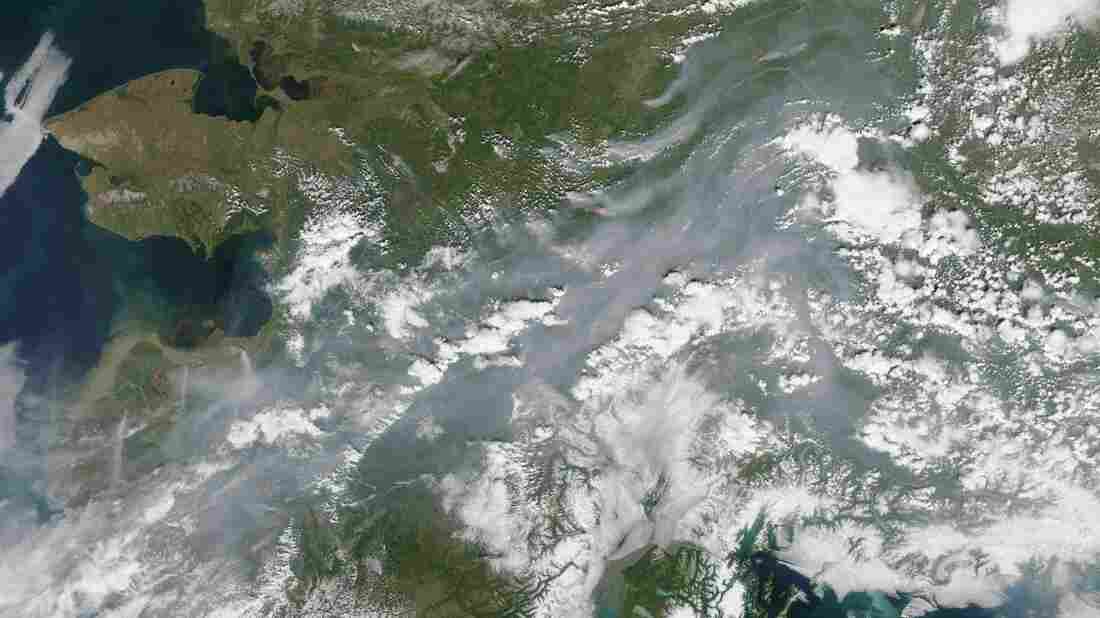 Images taken by NASA satellites last month revealed the extent of wildfires in Alaska's interior. Beyond such wildfires' immediate threats, some scientists are also concerned that they could lead to melting permafrost — and hasten the pace of global climate change. NASA hide caption 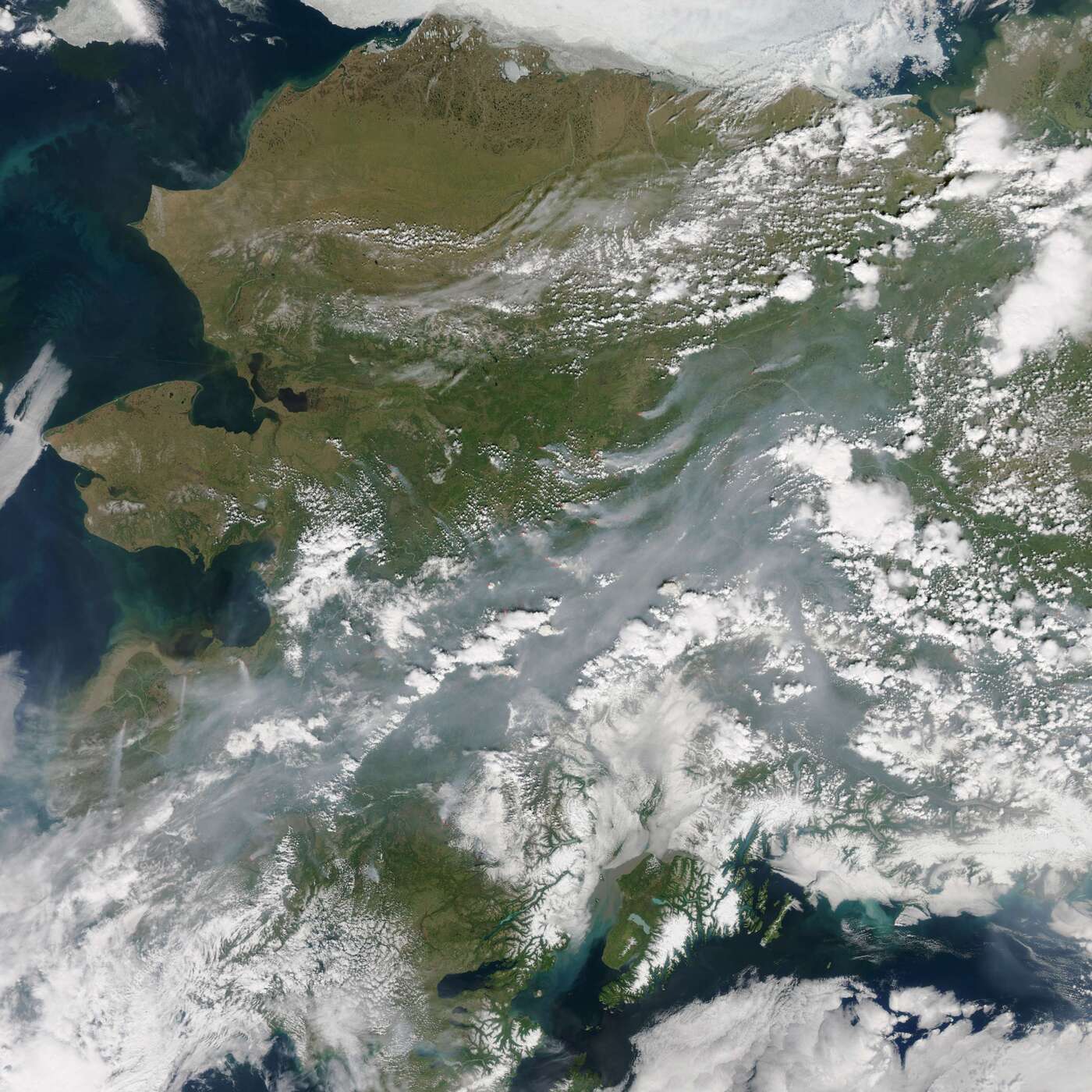 Images taken by NASA satellites last month revealed the extent of wildfires in Alaska's interior. Beyond such wildfires' immediate threats, some scientists are also concerned that they could lead to melting permafrost — and hasten the pace of global climate change.

A good example of that can be found just a half-hour drive from the Fish Creek Fire, in a wide, densely vegetated area called the Tanana Flats, south of Fairbanks.

Merritt Turetsky, a research ecologist from the University of Guelph in Canada, runs a field site there.

She kneels on the spongy, springy ground and starts sawing through the surface with a long knife, cutting away at that duff layer that's burning in many of the fires around the state.

"Feel how dry that is," she says. "I mean, we had rain last night and it's still this dry. This stuff burns like crazy."

She cuts more of the earth away, reaching into the hole up to her elbow. The dirt at the bottom is cold and wet, which means it's the layer just above intact permafrost, Turetsky says.

She grabs at a piece of the rooty soil she just cut away.

"This is 40 centimeters of a blanket that protects [permafrost] from what's happening at the surface," she says. "But when a fire comes through it might remove 15 or 25 centimeters of this organic mat."

The result is a thinner blanket — providing less protection for the permafrost below.

That's particularly problematic given the changing climate in the planet's higher latitudes. Alaska has already warmed by more than 3 degrees Fahrenheit in the past 50 years, rendering much of the permafrost here unstable.

As His Home Melts Away, Teenager Sues Alaska

For proof, she walks just 10 yards away, through thick trees to a bald patch a few acres in size. As she walks from the forested area to the open area, her steps slow and her feet sink. Each step comes with an accompanying splash.

It's a thin layer of vegetation on top of muddy, soupy water — water that was frozen in permafrost not long ago.

Can The Ecosystem Compensate?

Turetsky is here with a group of graduate students and researchers from the University of Alaska Fairbanks to determine why the permafrost thawed.

They take core samples of trees around the bald spot's perimeter and samples of the water below that thin layer of vegetation.

Nearly all of the samples show signs of a fire that burned through the area maybe 40 years ago: a fire that burned off that top layer of duff, leaving the permafrost vulnerable to the hotter temperatures of the last couple of decades.

Now, Turetsky says, all of the carbon that was trapped in that permafrost, frozen in time, is available to be put back in the atmosphere.

What that means is debatable. Some scientists think that the ecosystem will be able to compensate for all of that new carbon with new plant life. They point to an increase in the number of hardwood trees in Alaska, which grow faster and absorb more carbon, as a potential sign of that.

Other scientists, like Turetsky, are less optimistic. She does believe that the environment can compensate for the carbon that's released when a fire burns up trees and brush, and even the carbon that's been piling up for hundreds of years in duff.

The carbon that can get released from thawing permafrost, though?

"The atmosphere thought it lost that carbon and all of a sudden it's being returned to the atmosphere after a prolonged period of time," Turetsky says.

"That's the kind of carbon pulse to the atmosphere that actually can invoke additional climate change, above and beyond human emissions."

In the audio of this story, as in a previous Web version, we call Teresa Hollingsworth a research ecologist at the University of Alaska Fairbanks. She is a U.S. Forest Service employee.