Accessibility links
Review: 'Circling The Sun' By Paula McLain The author of The Paris Wife is back with another novelized memoir, this time of pioneering aviator (and all-around adventurer) Beryl Markham, the first woman to cross the Atlantic Ocean east to west.

An Airborne Adventurer's Journey In 'Circling The Sun'

An Airborne Adventurer's Journey In 'Circling The Sun' 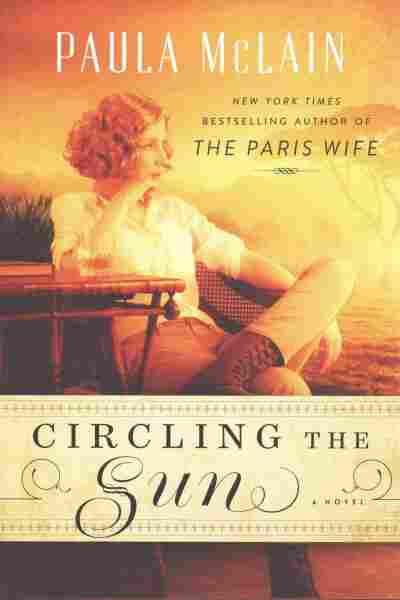 As she approached old age in the 1980s, the author, aviator and adventurer Beryl Markham had been largely forgotten. Her 1942 book detailing a pioneering east-west crossing of the Atlantic Ocean by plane, West with the Night, was long out of print. She had returned to her beloved Nairobi and was eking out a living training thoroughbred racehorses. Then a bit of praise tossed her way by Ernest Hemingway ("It really is a bloody wonderful book") turned up in a long-lost letter. West with the Night was republished in 1983 and became a smash hit best-seller, allowing Markham to die in 1986 a comfortably wealthy woman.

It was only the last lucky turn of events in an extraordinary lifetime full of them. As chronicled in Paula McLain's richly textured new novel, Circling the Sun, Markham's life is the stuff of legend. The Paris Wife, McClain's earlier dip into novelized memoir, related the bittersweet saga of Ernest Hemingway and his first wife, Hadley. This novel cuts a wider swath than that book did, against a majestic backdrop of African scenery.

Circling the Sun focuses on Markham's life through her 20s; she tells her story from the cockpit of her Vega Gull airplane during her record-breaking 1936 flight. Below is the "black chop and nothingness" of the Atlantic, with "the propeller ... slicing through years, turning me backward and also endlessly forward, setting me free."

Her flight into the past begins with her wild-child upbringing. Born Beryl Clutterbuck, raised in British East Africa ("before Kenya was Kenya") to a neglectful mother and an accomplished racehorse-trainer father, she modeled fearlessness throughout her life. Young Beryl always runs with the boys, training up as a warrior among the Kipsigis people of Kenya. Boarding school doesn't suit her: "I ran away half a dozen times, once hiding in a pig hole for three days." Eventually, following in her father's footsteps, she becomes the youngest — as well as the only female — licensed horse trainer in Kenya. This in the world of the early 20th century, when a woman simply riding astride shocked high society.

I liked the way McLain mythologizes crucial incidents in Markham's life. A childhood attack by a lion, the pet of a family friend, leaves Markham undaunted, even as she feels "his dagger teeth and his wet tongue." The future aviator takes away only a feeling of invincibility: "This is how it feels, then. This is what it means to be eaten by a lion." Give her a stallion with a glint of murder in his eye, and Beryl Markham is happy.

Beautiful, smart and headstrong, the independent young firebrand in trousers bewitches every man and woman she meets. Her passions prove uncurbable; Circling the Sun captures the private side of a woman who appears preternaturally self-assured, even as her world is crashing down around her ears. Undeterred by a failed affair, a wretched divorce and looming poverty, she presses on. She turns her fortunes around with a filly named Wise Child, a long shot she brings to greatness on the turf.

At the heart of Circling the Sun is Markham's tangled, explosively romantic liaison with the aristocratic big-game hunter Denys Finch Hatton. We've encountered Hatton before, played by Robert Redford in the movie Out of Africa, based on the memoir of Baroness Karen Blixen, aka Isak Dinesen.

Somehow, Blixen failed to mention Markham in her memoir. The slight might have been intentional, an older woman (by 17 years) cutting an upstart rival; McLain effectively contrasts the maturity of the Blixen-Hatton relationship with the younger woman's infatuation. Markham, meanwhile, considers the dashing, poetry-reciting Englishman to be her soul mate. "The self sufficiency and free-spiritedness Whitman was celebrating," she says, "and the connection to wild things and wildness — that was a part of me, and Denys too."

Finch Hatton introduces Markham to the magic of flight. "'Sounds like heaven, then,' I told him. 'Save some of it for me.'" But Hatton loses his life in a plane crash, a flight Markham was supposed to be on.

Paula McLain has created a voice that is lush and intricate to evoke a character who is enviably brave and independent. Markham's self-stated challenge is overcoming the "horrible crimes [of] being a woman and daring to think I could be free." Soaring high over the Atlantic at the age of 28, she finally embraces the freedom she seeks when she learns to defy gravity.

Read an excerpt of Circling the Sun