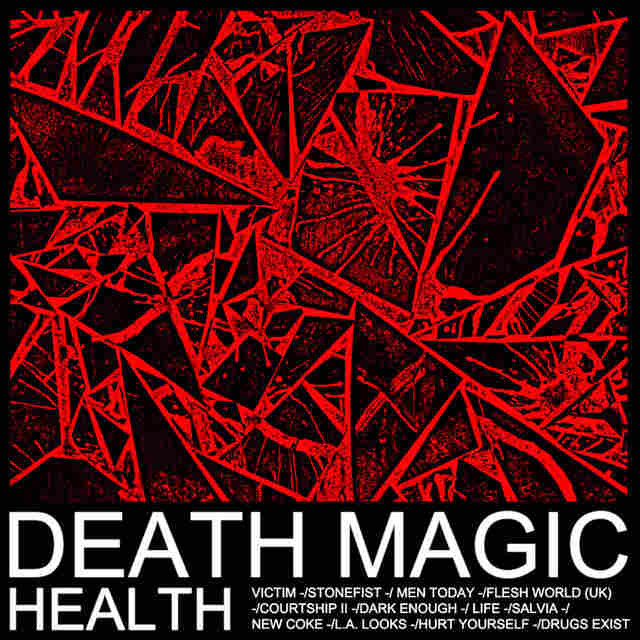 For HEALTH, an ambitious noise-rock band from Los Angeles, the all-caps designation is well-deserved. Every gesture on Death Magic, the group's third album (not counting remix packages or video-game music), is grand, and each resulting sound is scaled to match. The opening track, "Victim," commences with a slow, steady beating of drums and what sounds like a heavily processed tuba — both presented with a force and foreboding that could soundtrack Godzilla preparing to stomp on a city. When words do come, the picture is not pretty: "Love, love, love / is not enough," intones a voice through a numb, deluded chant.

That all this can seem bright and even somewhat cheery is a testament to how HEALTH's harsh sounds are also surprisingly inviting. For instance, "Stonefist" takes shape as a kind of singed, seething pop; and "Men Today" unfurls with a savage drum solo layered by waves of nuanced noise, intensifying stretches of varying digitized textures and grains. Similarities stream back to '80s strains of industrialized new wave turned out by the likes of Depeche Mode and Pet Shop Boys, but the scale and density of it all is undeniably contemporary. What Mad Max: Fury Road is to the road movie, Death Magic is to chillwave.

"Flesh World (UK)" introduces a less convincing mode of amped-up dance music, with fleet, club-minded beats that teeter under the weight of the action. But the energy remains striking at any speed: slower songs that shift gears through further blasts of agitation ("Courtship II"), mid-tempo odes that derive their potency through persistence ("Life"), and one antic, halting assault that brings to mind syncopated jackhammer ("Salvia"). Somehow, through all the vein-straining intensity, the tone is less antagonistic than alluring, open to attention in different registers. The dreamy singing of Jake Duzsik floats hopeful and wide-eyed even in the midst of all the haunted melancholy, similar to the way vocals work within the Icelandic band Sigur Ros. And even when Death Magic is pitched to its abrasive, scabrous extremes, there's a thrill in being taken over by a sound so meticulously crafted.