Accessibility links
New Griswolds Take New Dysfunctions On A 'Vacation' This time it's Rusty Griswold, the grown son of Chevy Chase's Clark Griswold, dragging his family on a doomed road trip. Critic Scott Tobias says the movie is overeager to provoke and offend. 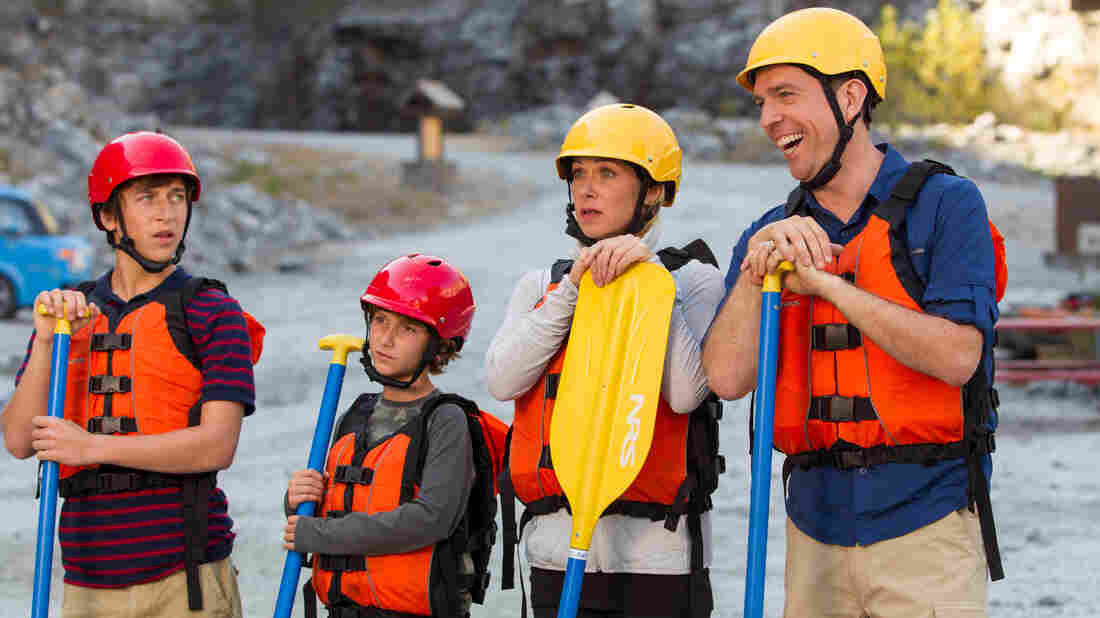 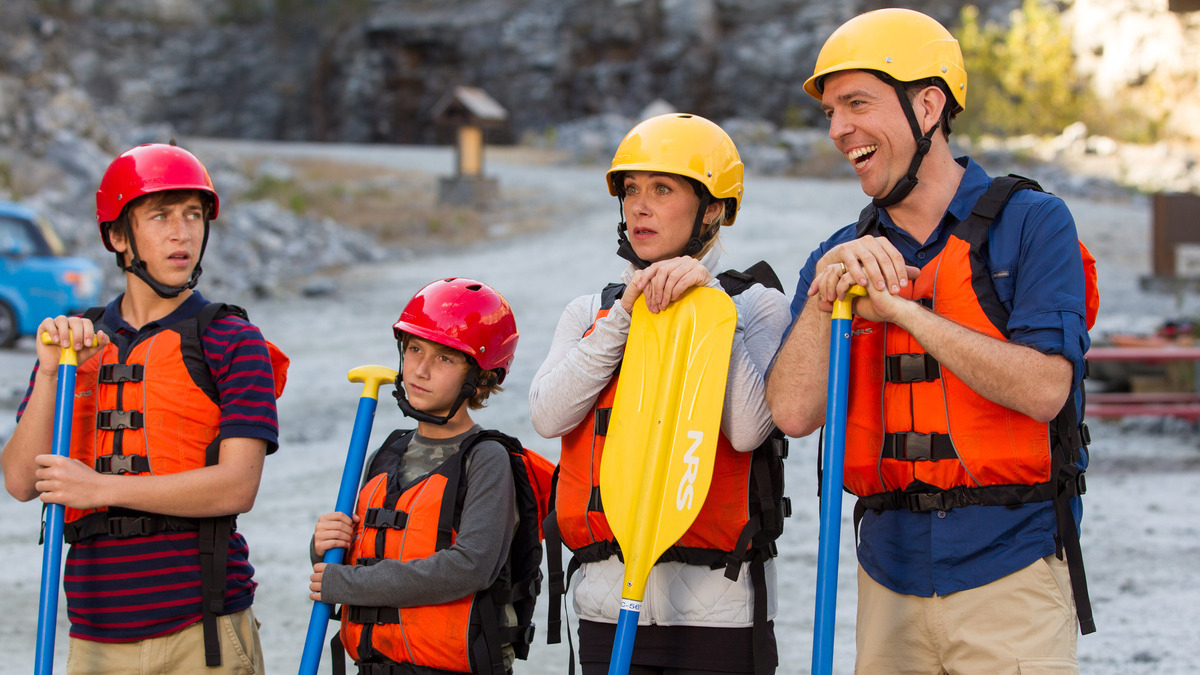 Skyler Gisondo (from left), Steele Stebbins, Christina Applegate and Ed Helms star as the next generation of Griswolds in Vacation.

Those keeping up with the National Cinematic Lampooniverse (NCL) will be interested to know that Vacation isn't a remake of the three-plus-decade-old Chevy Chase comedy, but a continuation of the series. It takes place in a world where the events of Vacation, European Vacation and Christmas Vacation have happened and everyone has gotten older, if not wiser. Now Rusty Griswold, the grown son of Chase's Clark Griswold, wants to follow in his father's footsteps and drag his own family on a cross-country misadventure. Such is the power of nostalgia: Just as the 1983 Vacation is a bad movie that's remembered fondly, Rusty longs to recreate an experience that he forgets was a complete disaster.

Written and directed by John Francis Daley and Jonathan M. Goldstein, the writing partners responsible for Horrible Bosses and The Incredible Burt Wonderstone, the new Vacation reasserts the hard-R raunch of the National Lampoon brand after the sequels drifted into more family-friendly fare. But while it roughly follows the Family Truckster's tire tracks to Walley World, the film feels more like one of the icky spectacles that followed There's Something About Mary, when gross-out comedies were in a race to the bottom. It's as if Daley and Goldstein started with a list of disgusting topics — outré sex acts, human waste, pubic hair, projectile vomiting, cow cannibalism, et al. — and constructed a narrative around them.

Since Vacation is a road movie, there are plenty of detours, like a side trip to a secluded "hot spring" where the Griswolds immerse themselves in the sulfuric mist of raw sewage. As with his father, however, Rusty (Ed Helms) will let nothing deflate his relentless good cheer, even as his optimism becomes indistinguishable from madness. Though his wife Debbie (Christina Applegate) would prefer a romantic trip for two to Paris, Rusty sees the trip as a chance to make up for his shortcomings as a husband and father, yet turns a deaf ear to their griping. From the moment they leave the driveway in suburban Chicago, everything goes wrong for Rusty, who fails to recharge his love life and can't keep his foul-mouthed youngest son (Steele Stebbins) from bullying his guitar-plucking older brother (Skyler Gisondo).

For all the film's strained stabs at outrageousness, it's the Griswold's car that earns most of the laughs. The latest in Albanian technology, the 2015 Tartan Prancer is like a contraption out of a Jacques Tati movie, with two gas tanks, a bewildering European hybrid plug and two sets of side mirrors facing each other. Daley and Goldstein have endless fun with the Griswolds mashing a series of mysterious buttons and key fob symbols and immediately regretting it. One causes the rear bumper to pop off, another slowly rotates the driver's seat 360-degrees, and a third is too ominous to press.

The car brings a welcome note of whimsy and lightness in a film that's overeager to provoke and offend. The scenes of coitus interruptus between Rusty and Debbie echo the false starts of Clark and Ellen (Beverly D'Angelo) in the original Vacation, but there's a true ugliness to Rusty's passive-aggressive treatment of his more sexually experienced wife. It's as if the world is bullying him with constant humiliation and emasculation and his response is to bully Debbie for her sorority-girl past and her mild crush on studly brother-in-law (Chris Hemsworth). It wouldn't be Vacation without père Griswold facing setback after setback, but the tone goes sour quickly.

The episodic nature of the road movie gives each pit stop a fresh opportunity to make a good impression, and a few actors take advantage, particularly Hemsworth as a preening Texan and Charlie Day as a suicidally despondent whitewater rafting guide. But the center does not hold: The Griswolds are a miserable bunch, and their dysfunction smothers the comedy as much as it fuels it. This Vacation wants us to wince and laugh at the same time.