Accessibility links
Interview: For Penn & Teller's Magical Partnership, The Trick Is Telling The Truth The duo are are back on Broadway. They both talk — yes, even Teller — with NPR's Scott Simon about magic, danger and the remarkable endurance of their 40-year partnership. 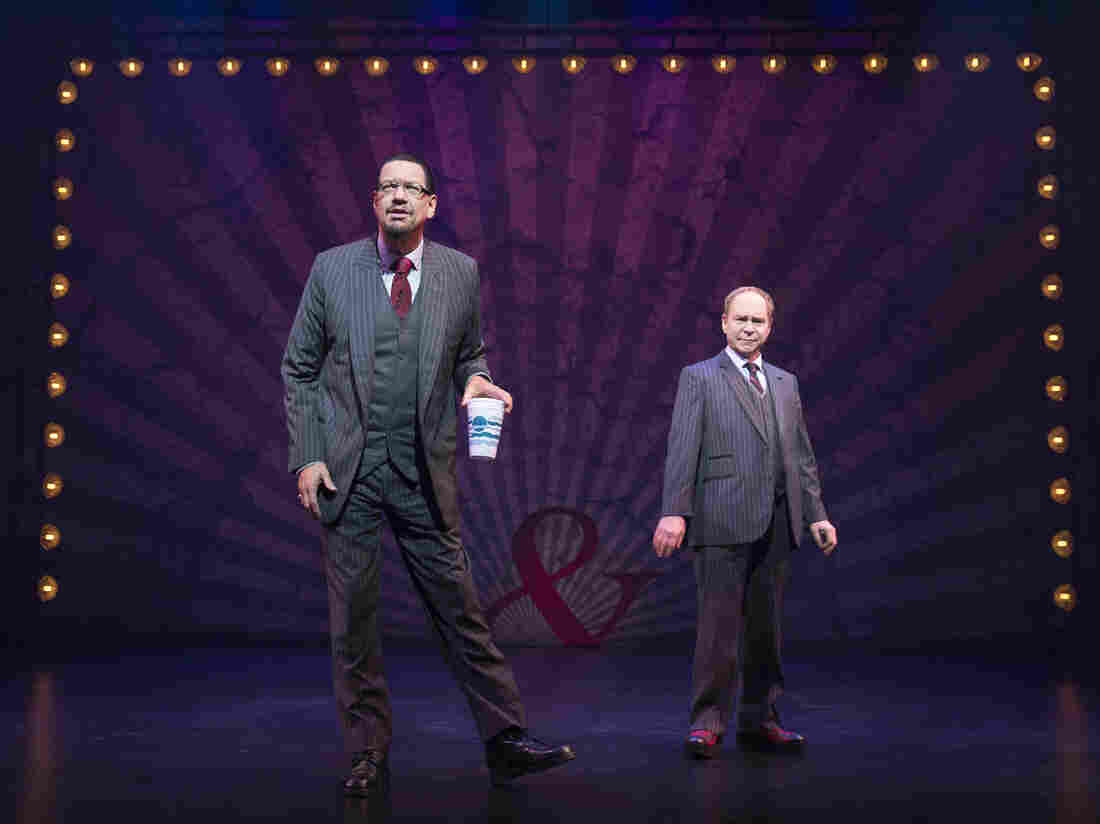 Penn and Teller take the stage on Broadway at the Marquis Theatre. Joan Marcus/Courtesy of Boneau/Bryan-Brown hide caption 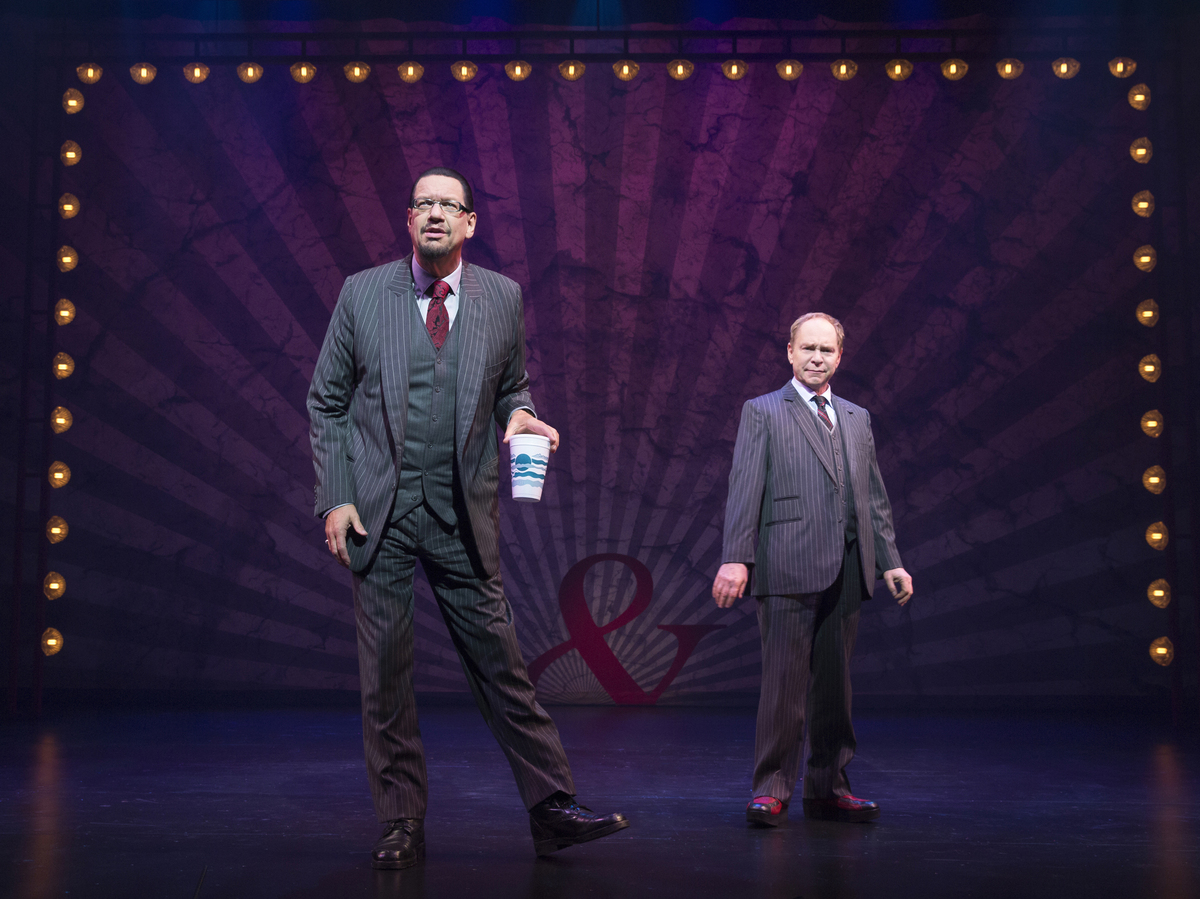 Penn and Teller take the stage on Broadway at the Marquis Theatre.

What does a couple do for its 40th anniversary?

If you're Penn and Teller, you play Broadway. Thirty years after they first played New York, the duo are back with a new show. And it's no quiet celebration, either. In the course of a single performance, they make a cellphone ring inside a dead fish, swallow both needles and fire — and make a rare African spotted pygmy elephant disappear.

Over the past four decades, Teller has directed Macbeth, they've both individually written best-selling books, and the pair's taken a starring turn in a Katy Perry video. Oh, and they've also got a couple of TV shows running right now — Penn & Teller: Fool Us and Wizard Wars — as well as a star on the Hollywood Walk of Fame.

They joined NPR's Scott Simon for a conversation on magic, danger and the remarkable endurance of their partnership — and they did it one at a time.

Click the audio link above to listen to the full interviews. 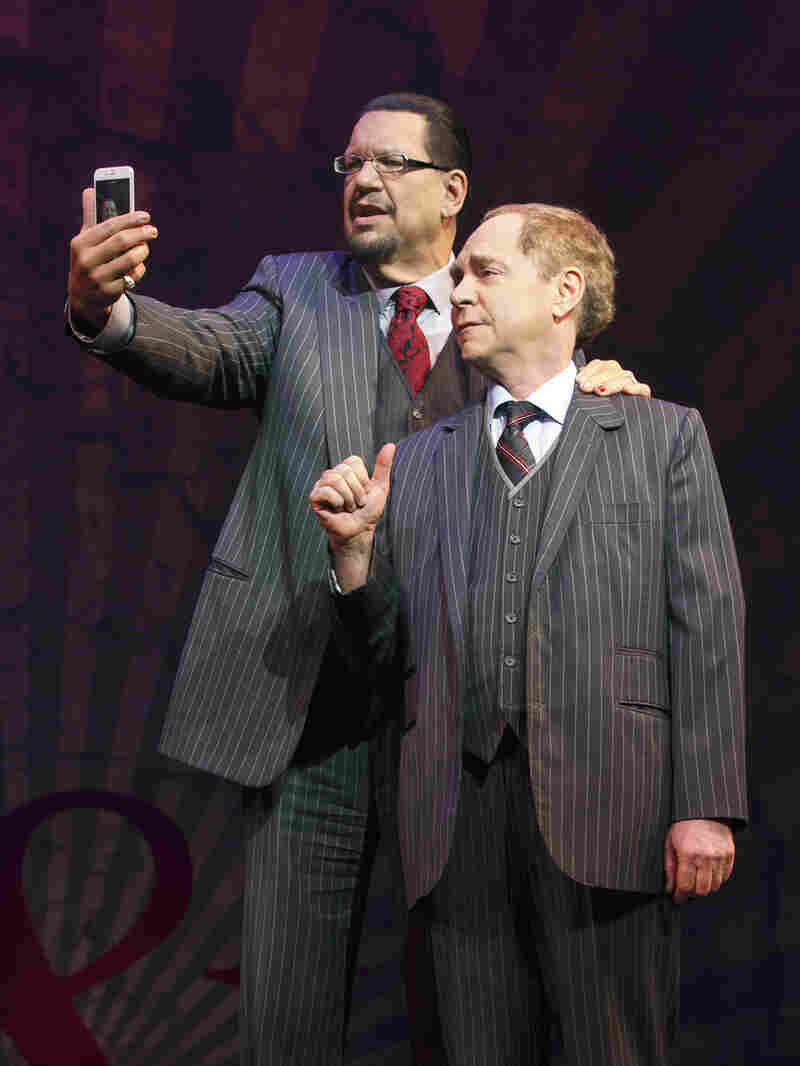 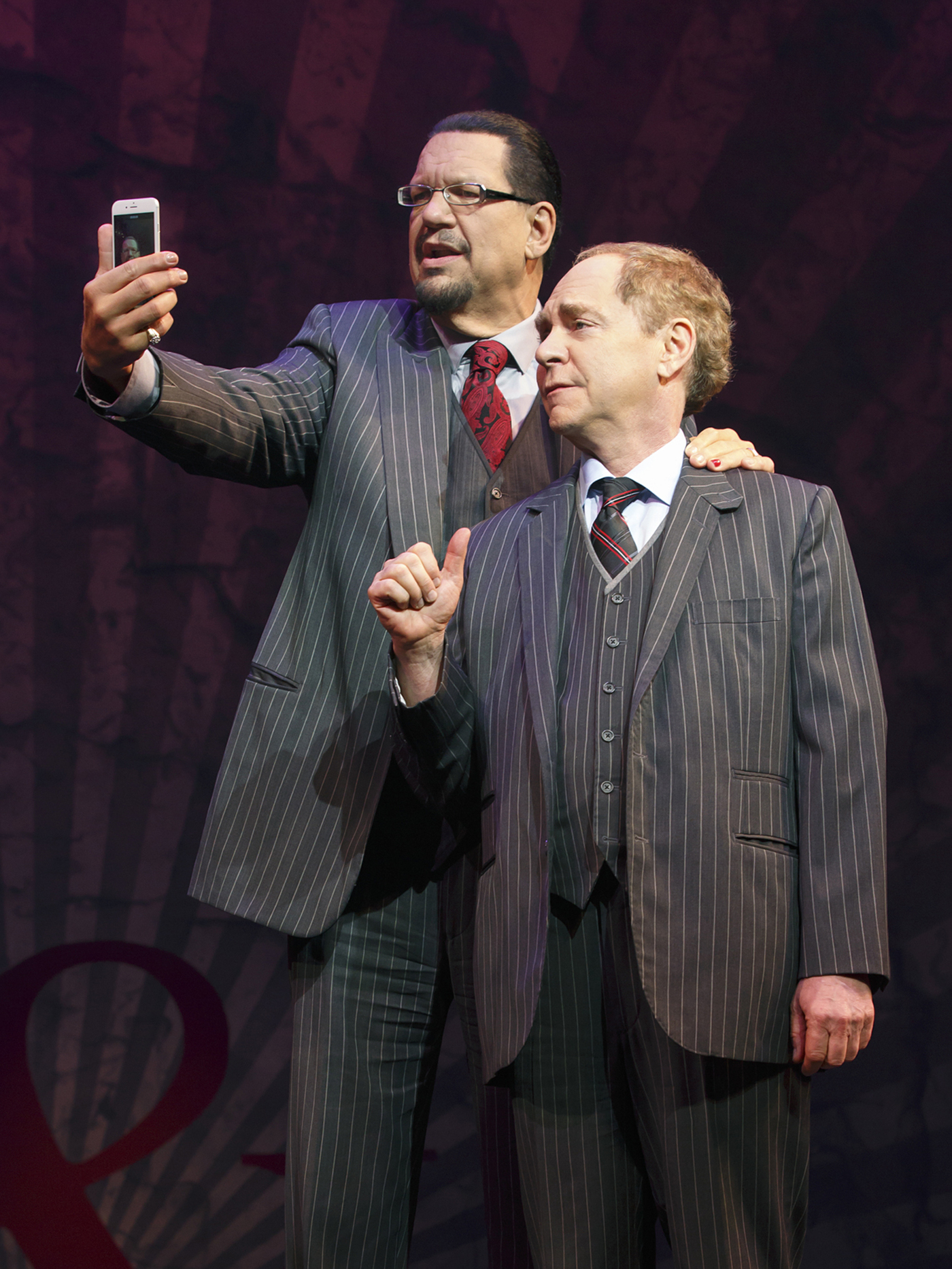 On magic that puts lives at risk

No one should ever be hurt doing art. Now, of course ... a light can fall on you, you know what I mean? And I don't mind being hurt, being uncomfortable. We've been covered with bees; we've had cockroaches all over us. But the idea that something life-threatening should be entertaining; I think humanity's sphere of compassion should have grown to eliminate that entirely. ...

You know, magicians will tell you you can't possibly say, during something that looks like a stunt, "This is actually a trick," or the entertainment value of that is completely negated. And I don't think it is. I want someone to think we do a good show. I don't want someone to think I'm mentally ill and don't have respect for life.

On the bit that ends the Broadway show — a monologue about the nature of magic, followed by a fire-eating trick

A lot of this is just — even though I'm now 60 — thoughts I had when I was 20. Rebellious thoughts. Conventional wisdom would be, if you're going to eat fire, you have to say you were born with a special skill that allows you to do this — "The Human Salamander" — and you have to do all of this.

You want your guts to say, 'We're going to die,' and you want your mind to say, 'If everybody died on this roller coaster, there's no way they could make money.' And you want those two to collide hard.

Turns out Taxi Driver doesn't dissolve. If I sit next to you and I write on the screen every time De Niro goes on, as Travis Bickle, "This is really De Niro. He doesn't really drive a taxi. He doesn't really care about Jodi Foster," somehow the art kind of takes over.

And the thing — and this is, I'm going to try to segue this in, but it really is nothing more than bragging — the great physicist Richard Feynman, who I got to know toward the end of his life and who is, you know, certainly one of the most brilliant thinkers of the 20th century, came to see that monologue.

He talked to me after it, and then came back to the show later and brought five other Nobel Prize winners with him. And [he] said to me afterwards, "I wanted them to hear that monologue, and I especially want my wife to hear that monologue, because she has never understood how those who look for answers are the ones who love the mystery the most." And he said, "I could never find a way to explain that; your fire-eating monologue explains that."

It often brings up that same subject: I don't think knowledge ever diminishes, ever.

On the idea behind not talking

Well, I resented magic patter, especially as a late teenager, because magicians were always saying redundant things. "Here I am holding a red ball." Well, yes. You're holding a red ball. I can see that. I asked myself, could you tell the story of a piece of magic just by doing actions and letting the audience watch and put the pieces together themselves?

And it turns out that there's lots of interesting benefits to that. Nothing fools you better than the lie you tell yourself. So, when you let an audience figure out what is going on and they tell themselves the beautiful lie that a good piece of magic is, it becomes convincing in a way that if the magician asserts that, the magician doesn't get through nearly as well. So that's part of the idea of not talking.

Another part is, at the time that I was doing that, I was playing fraternity parties at Amherst College, where I went. And I am a small man of not particularly imposing proportions or voice. And if I had tried to assert myself over a room full of drunken kids groping their dates and drinking beer, they would not have paid any attention to me. So I found that if I turned off all the lights except for a few lawn spotlights that I carried with me and put them on me, and then did creepy things like swallowing razorblades ... I found that when I did that sort of thing, they paid attention to me in a way that if I had tried to assert myself over them, they wouldn't have. It sort of undercut any kind of heckling.

On the pair's 40-year partnership

We were introduced by our friend Wier Chrisemer, and both of us really liked Wier and we didn't really like each other. I admired Penn immensely; to this day, his street act is the most perfect street act that I've ever seen. It was 12 minutes, it was tight, it was dramatically structured, it was hilarious, it was unnerving. And I believe that he has some admiration for what I do too.

That's what you want in a partner, an artistic partner. You want someone you're going to disagree with, and an idea that is third, that is other, will emerge from that.

The idea that you can respect someone without wanting to sit by a fire and snuggle with them is maybe not a very popular idea in show business, but it is a very true one. And what turns out to be more important in a long-term relationship is that you can do your job, and doing your job includes things like: Neither of us drinks, neither of us does any drugs, we are never late for gigs, we never miss gigs, we always show up — we always do our job.

Penn likes to say it's like two guys who own a dry-cleaning shop. They show up and do their jobs. And the relationship lasts very much longer than it would if you started like the kids who form a band in their garage — they're all good friends, and then the first time something goes amiss, they fight and then they don't like each other anymore.

Doesn't matter: There are lots of times when Penn does not like me, lots of times when I do not like him. And that's what you want in a partner, an artistic partner. You want someone you're going to disagree with, and an idea that is third, that is other, will emerge from that.