Accessibility links
For Many Adopted Dogs, The Journey Home Takes A Thousand Miles In Puerto Rico, poverty and lax rules have stranded about 300,000 dogs as strays. So rescue groups are sending many of those dogs to the mainland — and trying to change attitudes on the island. 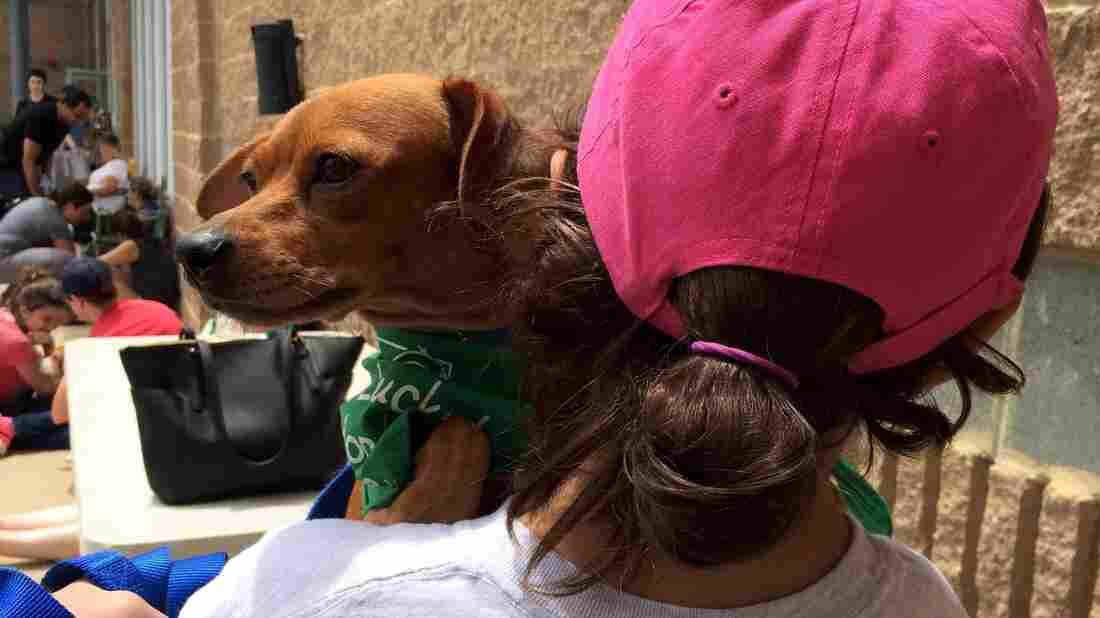 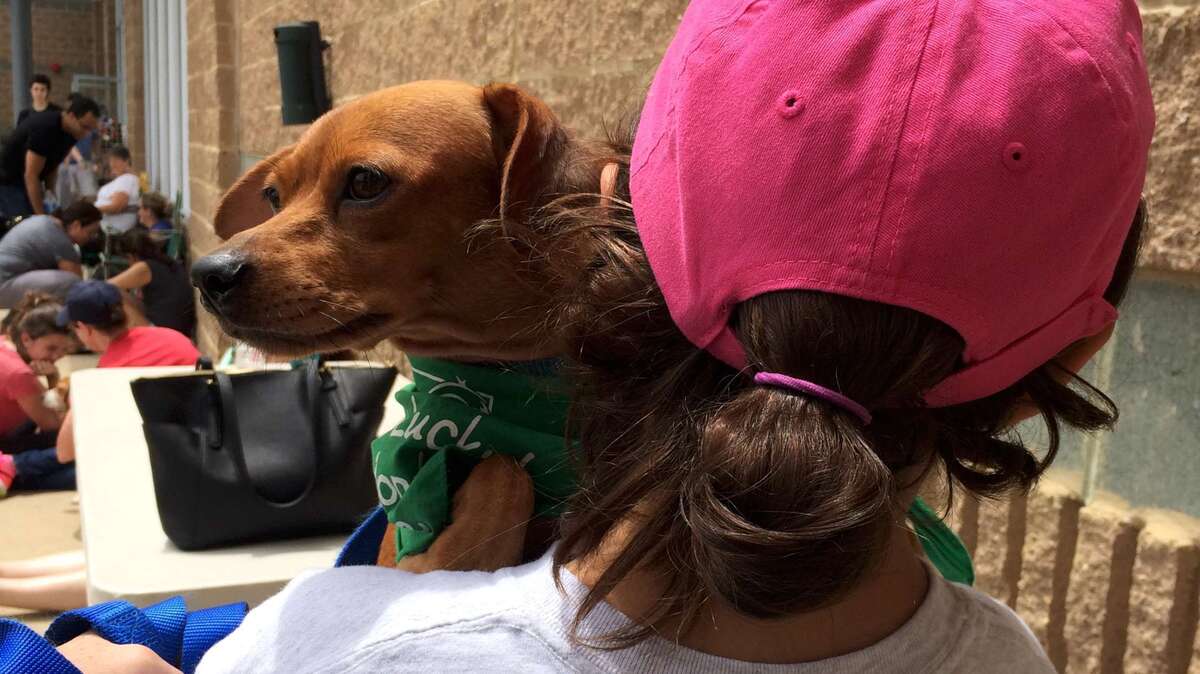 On a muggy Sunday morning in Rockville, Md., the parking lot of the local pet store is organized chaos at its finest. Several hundred people pack the lot looking for a dog to adopt, and they have 50 to choose from. But they'll have to sort through a whole bunch of barking and tail-wagging to do it.

The scene looks like a mix between a fair and speed dating. Volunteers run the check-in table, coordinators walk potential adoptive families through the logistics and people move from dog to dog trying to find a perfect match to take home.

And in many cases, those dogs have gone a long way to get to this parking lot. The event organizer, Lucky Dog Animal Rescue in Washington, D.C., brings in dogs not only from Virginia and the Carolinas, but Puerto Rico, too. In Puerto Rico alone, the Humane Society of the United States estimates there are about 300,000 homeless dogs.

Dinaz Campbell, 10, is among the people looking for a dog to adopt. She's here with her dad, and she says she's finally found her dream dog.

"I've been looking since last year" she says. "At the start, I was looking for a puppy until I realized how much work it was going to be."

So a slightly older dog, like Sherry, a caramel-colored 2-year-old with big eyes, seems to be a perfect fit for the rising fifth grader. Dinaz says it was love at first sight.

Like many here looking for a dog, Dinaz says she likes the idea of adopting and saving a dog's life. But she's still surprised to find just how far Sherry has come — all the way from San Juan. She was rescued from a dumpster in Puerto Rico with her three puppies. Her $300 adoption fee covers shots, treatment and canine airfare from the airline.

Mirah Horowitz, founder and executive director of Lucky Dog, one of nearly 14,000 animal rescue organizations in the U.S., explains why so many of their rescues come from Puerto Rico, despite the distance. The spay-and-neuter laws are especially lax there, she says, and Puerto Ricans don't seem to share the culture of adoption that has become the norm on the mainland. 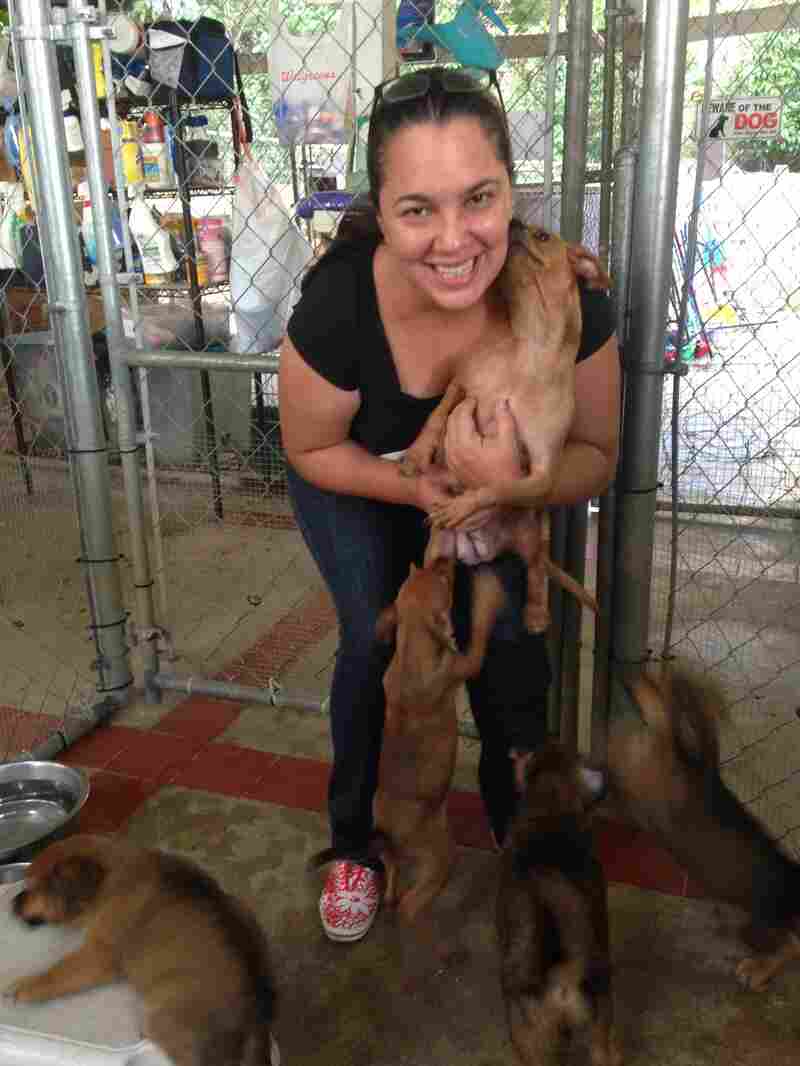 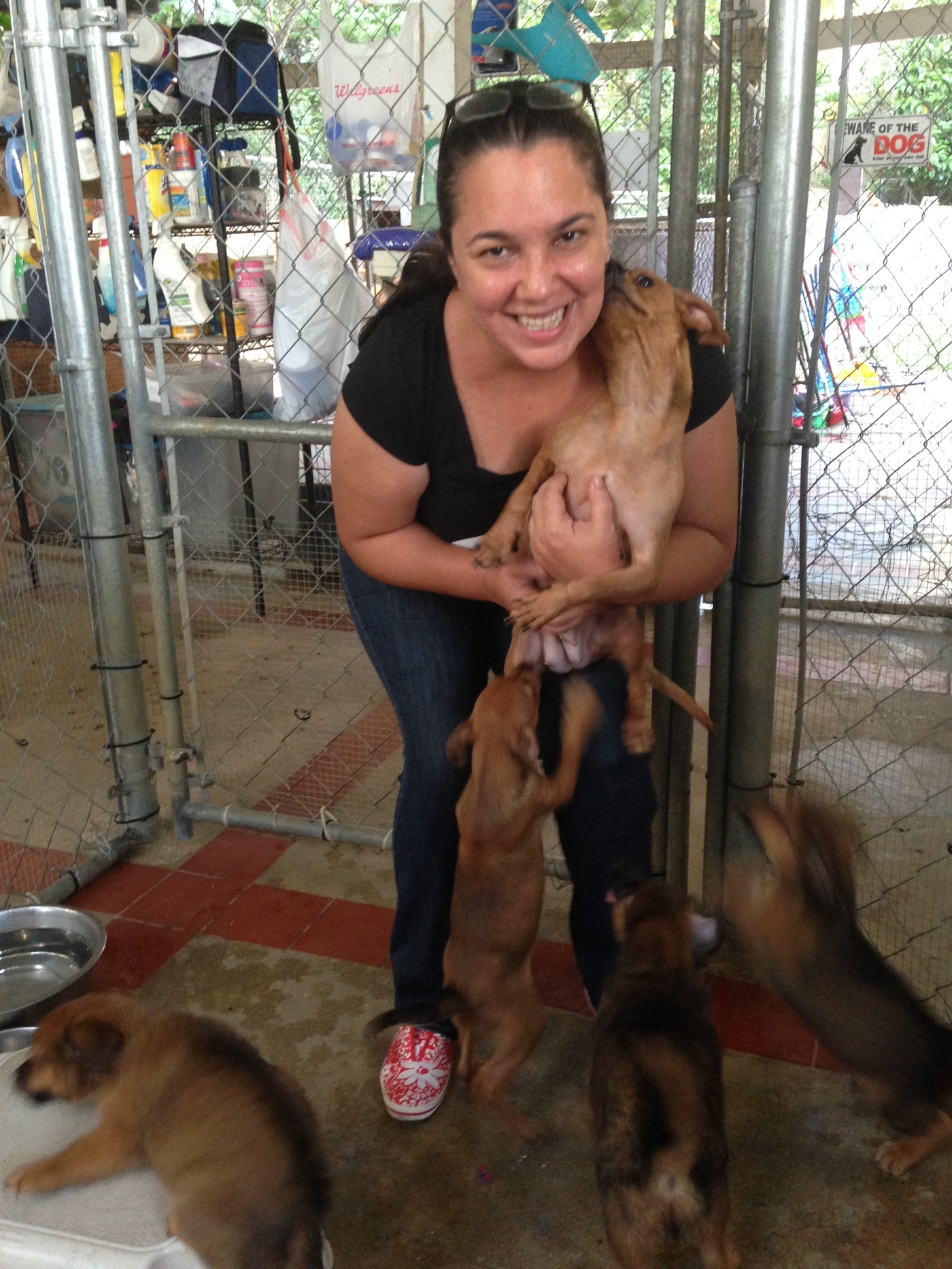 Michelle Cintron works with the Puerto Rico Alliance for Companion Animals. "Dogs are everywhere on the island," she says. "Once you see them, you can't turn your back to them."

And Michelle Cintron, a dog rescuer with the Puerto Rico Alliance for Companion Animals, echoes that sentiment.

"The dogs are just roaming around," Cintron says, "and a lot of people don't see them, because when they are so many of them that they just become part of the landscape."

Cintron works at the Alliance's shelter in Guaynabo, just north of San Juan. The place has become a paradise of sorts for dogs, many of which are rescued sick or injured. At the shelter, dogs get medical care, vaccinations and lots of love before they are found a home — which is the biggest challenge.

In Puerto Rico, satos, local slang for stray dogs, are just as common as palm trees and white-sand beaches, Cintron says. Satos can be found in rivers, trash cans, sidewalks and beaches — "because," she says, "if you want a dog in Puerto Rico, you open your door and you'll find a dog."

The no-kill movement began two decades ago in the United States, and it has given millions of dogs a second chance; instead of being euthanized, they are matched with families. Until recently, though, that movement had struggled to take hold in Puerto Rico.

But now, the movement is picking up momentum on the island. Earlier this year, the Humane Society set up an office for the first time there to crack down on animal abuse and promote a culture of love and respect for pets. And the group is setting up an infrastructure to help enforce animal cruelty regulations.

Beyond the lack of enforcement on spay-and-neuter laws, poverty also proves to an issue. Many in Puerto Rico have trouble covering their own daily needs, let alone paying for a pet's medical care and food. As a result, dogs often face neglect, abuse and cruelty.

Cintron says that when the alliance was created five years ago, it was intended not just to teach people humane ways to care for dogs, but also to change attitudes. They're working hard to change the ways people think about the treatment and adoption of dogs on the island.