Accessibility links
'Spies' Is A Cinematic Account Of Americans In War-Torn Paris Historian Alex Kershaw's latest book focuses on an American doctor and his family who worked with the French Resistance from their apartment just down Avenue Foch from the Paris SS headquarters.

'Spies' Is A Cinematic Account Of Americans In War-Torn Paris

'Spies' Is A Cinematic Account Of Americans In War-Torn Paris 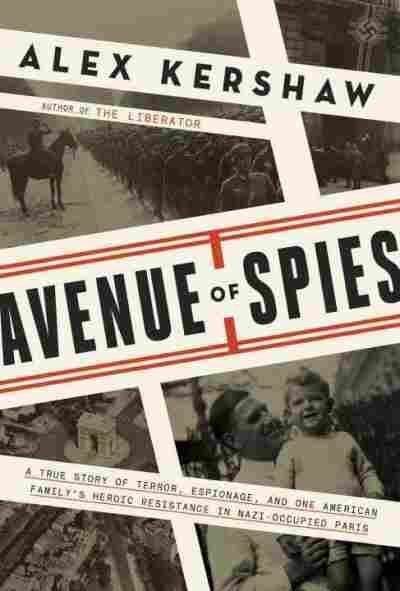 A True Story of Terror, Espionage, and One American Family's Heroic Resistance in Nazi-Occupied France

It's the least surprising thing in the world to discover that historian Alex Kershaw's latest book, Avenue of Spies, has already been optioned for development with Sony Pictures TV. Its circumstances — an American family in Paris aiding the French resistance from an apartment only a few doors down from the Paris headquarters of the SS — are too cinematic to ignore. And if that sounds like a coincidence so precarious only fiction can support it ... it sounded that way to the Jacksons, too.

The Jacksons: World War I veteran Sumner, a surgeon at Paris's American Hospital, Toquette, a onetime nurse, and their son Phillip. Their house: A ground-floor apartment at 11 Avenue Foch, one of the most well-heeled streets in the city. When the German threat loomed, Sumner began to smuggle Allied prisoners to the French Resistance; after the Nazis invaded Paris, Toquette met another Resistance network and agreed to turn the apartment into a communication hub, passing messages that would become crucial, and increasingly dangerous, as the war went on and Germany's eye turned slowly down the Avenue.

Kershaw has made a bestselling career with stories of World War II that allow for a neat slice, a particular moment of a sprawling war: The Bedford Boys and a group of young men from the same town who perished on D-Day, The Few and the Americans who joined the Royal Air Force in 1940 to supplement the ranks, The Longest Winter and the Battle of the Bulge, The Liberator and an American soldier's journey from Italy through the last days of the Reich. Kershaw's clearly mastered his field — the endnotes and bibliography lend a sense of effortless familiarity, and every page of Avenue of Spies is dense with context — though his writing is never quite as graceful as his scholarship.

There's also, at times, a sense of our American protagonists and German antagonists operating in a France oddly absent of the French. They appear as a downtrodden patriotic collective or the occasional collaborator, but anything outside of Sumner's hospital activities can feel as if it's occurring behind a veil. Part of this, of course, is a matter of circumstance. Sumner and Toquette deliberately left their son out of their espionage activities — but the book relies on Phillip's memories to reconstruct his parents' lives. That leaves Kershaw to connect dots in ways that are illuminating but lack particular immediacy for French operatives. This is a knowledgeable book about an American family caught in war-torn Paris; this is not, for all the glimpsed operations and notes on crucial underground activities, a particularly satisfying book about the French Resistance.

There's something grim in saying that narratives of World War II are "accessible;" within the word is some sad acknowledgment of the world the war left behind — and of the patterns that produced that devastating conflict and echo strangely still.

And despite some truly heroic gestures from the Jacksons, the book's asides — noting small rocks in the avalanche — might be its most resonant aspect. Everything that happens near the Jacksons is echoed elsewhere; from "polite" German regulations about off-limits consorts to Coco Chanel's anti-Semitism, harrowing escapes at the Spanish border to details of SS torture, Kershaw makes sure things are connected.

In between noble sentiment and reassurances that not everyone endorsed the things that happened in Vichy France, there's a comforting lack of the Great Man theory of history. Hitler appears only twice: Once to tour Paris, once to ask if it's burning. Kershaw lingers instead on smaller, more chillingly recognizable gestures. The Gestapo manipulate public sentiment by providing scapegoats or silencing rebels; the Vichy government offers to round up and deport thousands of its Jewish population for some imaginary lenience forthcoming for others; the sadistic SS hardliners do their damage according to the scope they were allowed by a revolving door of superior officers. Even the Jacksons, surrounded by French rebels and sympathetic colleagues, become brave resisters among the brave.

There's something grim in saying that narratives of World War II are "accessible;" within the word is some sad acknowledgment of the world the war left behind — and of the patterns that produced that devastating conflict and echo strangely still. There's a reason, one imagines, that Phillip — who was imprisoned in an internment camp by the SS and later testified against them — brought home a suitcase full of guns, and became a hunter of big game in the world post-war. And there's a reason, one imagines, that Kershaw quotes historian and former resistance fighter Jacques Delarue in the book's final section: "Men have not the right to forget so quickly. They have not the right."