Accessibility links
Opulent And Apolitical: The Art Of The Met's Islamic Galleries Navina Haidar, an Islamic art curator at the Met, says she isn't interested in ideology: "The only place where we allow ourselves any passion is in the artistic joy ... of something that's beautiful." 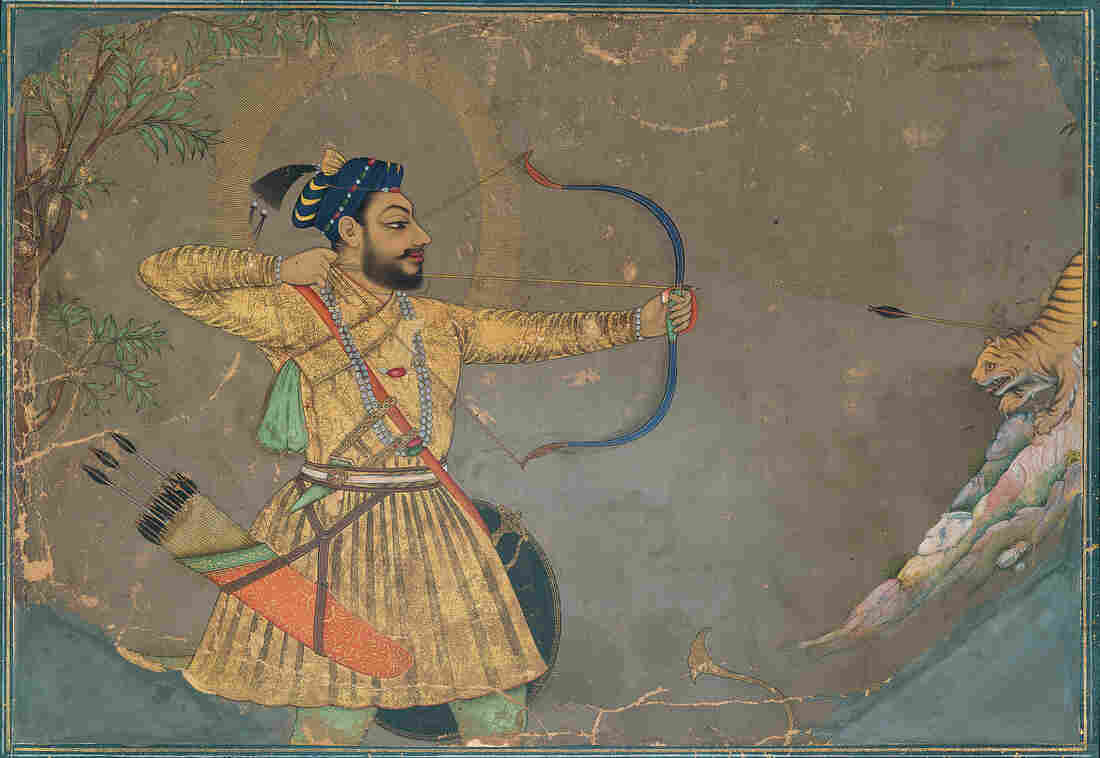 toggle caption
The Ashmolean Museum, Oxford. Lent by Howard Hodgkin./Courtesy of the Metropolitan Museum of Art 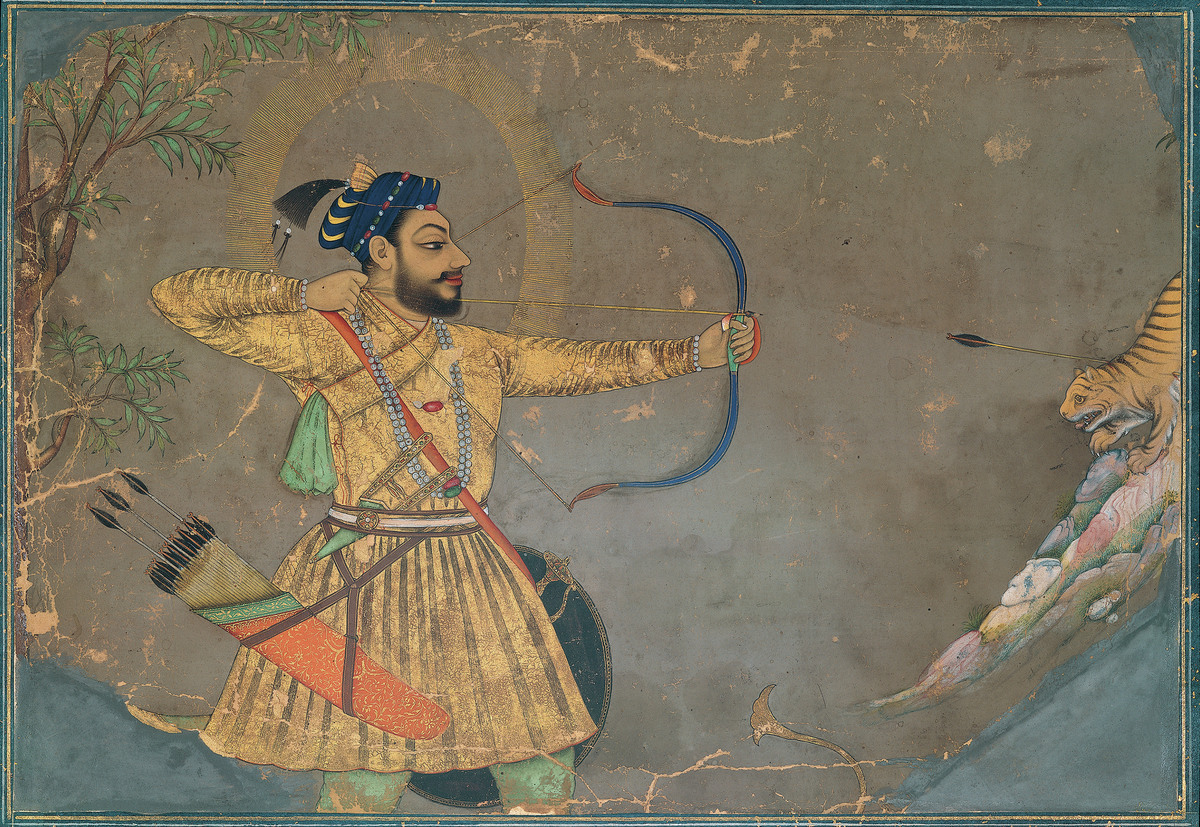 The Ashmolean Museum, Oxford. Lent by Howard Hodgkin./Courtesy of the Metropolitan Museum of Art

This is an introduction to NPR's Muslim Artists, Now series, which will highlight contemporary Muslim musicians, writers, painters and filmmakers, among others.

When the Islamic galleries of New York's Metropolitan Museum of Art reopened in 2011 (after eight years of renovation), it was heralded as a landmark moment for deepening American understanding of the Islamic world. Amid live performances and lectures, the museum's 15 new galleries brought audiences into a physical world of lavish carpets, ceramics and miniature paintings.

Since the Met's Islamic revival, the Louvre in Paris and the British Museum in London have also invested in glittering new galleries for Islamic art. And this year alone in the United States, the Los Angeles County Museum of Art, Baltimore's Walters Art Museum and the Dallas Museum of Art each has an exhibition dedicated to the genre.

Sheila Canby, the curator in charge of the Met's Department of Islamic Art, acknowledges that showcasing the galleries' objects provides an alternative to the predominant political narrative. She says, "After things like Sept. 11, after things like the destruction of ancient sites in northern Iraq and Syria, museums serve as a place where people can come to this idea of Islam through the material culture, not just through what they're being told all the time."

At LA Museum, A Powerful And Provocative Look At 'Islamic Art Now'

But at a time when the meaning of Islam is so fraught and the debate over Muslim values is so charged, what exactly constitutes Islamic art? Is it a religious definition, an ethnic category or a political statement?

The formal, art history discipline of "Islamic art" originated in 20th-century Western museums. It began as an offshoot of antiquities departments as curators began to notice the aesthetic links between medieval Islamic courts stretching from Spain to India. The Met defines the most salient of these links as "the predilection for all-over surface decoration," and it includes calligraphy, vegetal patterns, geometric patterns and figural representation.

The Met's first Islamic galleries were called "Islamic Art" and opened in 1975. When they reopened in 2011, they were also given a new name: "New Galleries for the Art of the Arab Lands, Turkey, Iran, Central Asia and Later South Asia." Curator Sheila Canby says, "What we want to reflect in the title over the door is kind of what we cover and what we don't cover, because of course there's a huge population of Muslims in places like Indonesia, but we don't have the art of Indonesia in these galleries."

That evolution in the study of Islamic art mirrors cultural shifts in today's Muslim societies. The kingdoms that gave rise to the workshops and artisans whose work fills the Met's galleries no longer exist, and today those regions have new borders, new crises and new economic realities.

For Met curator Navina Haidar, the central vision in reopening the museum's galleries was to highlight these objects as the world's heritage. She says the fundamental question is whether you see it "as the heritage of the Islamic world or do you think about it as the Islamic heritage of the world. You see, there's a difference there."

This summer, Haidar curated a critically acclaimed exhibition about the Muslim kingdoms of India's Deccan plateau. It included bejeweled decorative objects, massive diamonds and miniature paintings filled with details that required magnifying glasses. Like the museum's permanent Islamic collection, the emphasis was on showcasing the global trade links that created this world. Gallery labels underscored influences from China, Africa and Europe. And to make this even more inviting for a modern audience, Haidar sought to create an alluring vibe using music, mood lighting and and deeply colored walls — after all, the subtitle of the show was "Opulence and Fantasy."

"Sometimes when you're too puritan about things you can actually kill off the vibe completely, which is what we definitely didn't want to do," Haidar says. "One of the important concepts, actually, in the Deccan is Rasa — is flavor, is juice, is essence."

The interesting thing about the arts of the Islamic world and courts is that there is always a wonderful tension between ... the stark of beauty of [the most austere traditions] contrasted with a kind of opulence and a love for color ...

That might seem to run counter to the perception a lot of people have of Muslims as puritanical and uninterested in physical beauty. But Haidar says, "The interesting thing about the arts of the Islamic world and courts is that there is always a wonderful tension between ... the stark of beauty of [the most austere traditions] contrasted with a kind of opulence and a love for color, for texture; an imagination, a feeling for romance and beauty; some great music. So, you know, you have both ends of the spectrum and to somehow be inclusive in one's thinking is the best way to go."

But the museum's exploration of the Islamic world stops short of the 20th century, and that's a challenge for Munir Jiwa, a professor of Islamic studies at Graduate Theological Union. He says he loves visiting the Met's Islamic galleries, but it's difficult for him to make the connection between what's in the museum and what he sees, hears and teaches. "My daily work reminds me of ... just how difficult it is to relate or translate that very beautiful aesthetic experience that one finds in a place like the Met to the realities on the ground and the very difficult and challenging present," Jiwa says.

But according to Haidar, the role of the Met and of Islamic art historians is to be dispassionate and apolitical. "We show things on the basis of their artistic merit, their rarity, their condition and their historical importance," she says. "So we don't censor the evidence. We don't promote the evidence. We try to be strictly dispassionate about the evidence. The only place where we allow ourselves any passion is in the artistic joy and excitement of something that's beautiful and elevating and technically accomplished. But we don't get ideological about it."

Still, as you leave the Met's opulent galleries and return to the real world, it's striking that the formal idea of Islamic art ends in the 19th century. What's happened to Muslim creativity since the collapse of these kingdoms, since industrialization, since globalization and since our current debates around radicalization? Those are questions that contemporary artists have taken up — artists Haidar has the utmost respect for.

"Most contemporary artists are very brave people," she says, "because they actually are willing to take on these issues and not let their expression be suppressed. ... And if their voices were to be extinguished — the voice of the writer, the voice of the artist, the voice of the poet, and then the evidence of history — that would be a truly terrible, dark world that would descend upon all of us."