Accessibility links
Review: 'The Fifth Season' Yes, N.K. Jemison's newest epic is the kind of fantasy that has not one but two glossaries at the end — but reviewer Jason Heller says that just underscores her sumptuous detail and dimensionality. 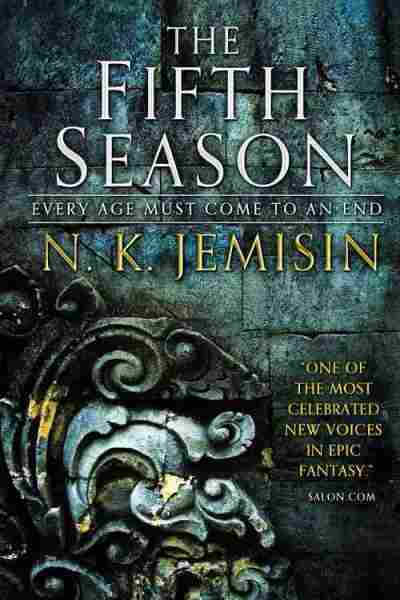 There are two ways to look at the kind of fantasy novels that come with big glossaries at the end. Negatively, they're self-indulgent exercises in building fictional worlds, with the author fixating on the sheer quantity of settings and characters to the exclusion of all else. Positively, fantasy-novel glossaries help the reader keep track of an intricate clockwork of imaginary peoples, places, and things — and that intricacy actually pays off.

In N. K. Jemisin's new novel, The Fifth Season, the payoff is astounding. Sure, there's a whopping glossary at the end of the book — two of them, actually — but that simply underscores how much sumptuous detail and dimensionality she's packed into her premise. The story takes place in a land called the Stillness, a tragically ironic name, seeing as how the geography is in constant, violent flux. The entire world undergoes apocalypses on a periodic basis, as regular as weather patterns. In the fractured landscape that houses the sprawling city of Yumenes, that instability has given civilization an equally volatile reality. A caste system scars it. Science and magic have uneasily mixed. And Essun is a small-town schoolteacher whose family has been brutally ripped apart from within.

Jemisin has built similarly complex worlds before, most notably in her multiple-award-nominated The Inheritance Trilogy. The Fifth Season is the first book in Jemisin's latest series, The Broken Earth, and it's already off to an equally promising start. Essun — grief-stricken after her husband suddenly kills their small son and flees with their daughter — begins a quest that starts out as a rescue but becomes something else entirely, as a horrific new cataclysm bears down on the Stillness.

Whether volcanic, seismic, atmospheric, geomagnetic, or manmade, each new disaster is called a Season, and the next one threatens to be the most devastating in recent history. History itself has gone through numerous disruptions, creating an ambiguity about the ancient era that comes to bear on Essun's own shadow-shrouded past and present. Not to mention those of Syen and Damaya, characters of varying castes whose storylines overlap with Essun's in a deeply clever and affecting way that drives home the mechanisms of power and oppression at work in vast backdrop of The Stillness. The Fifth Season isn't a straightforward book any more than it's an upbeat one, but it's stronger for that. And Jemisin maintains a gripping voice and an emotional core that not only carries the story through its complicated setting, but sets things up for even more staggering revelations to come in future installments of the series.

One of the book's big strengths, and big surprises, is the secret that its multiple point-of-view characters keep. It's a smart demonstration of structure and suspense on Jemisin's part, but it's also a sophisticated metaphor for the essence of the Stillness, a mystifying flux of geography and society that no collection of glossary entries can fully define. "The ending of one story is just the beginning of another," she writes early on, and that's just one of many sly snippets of foreshadowing that wind up feeling profound by book's end.

The Stillness is a study in geological upheaval; in their own way, so are its people. With The Fifth Season, Jemisin brilliantly illustrates the belief that, yes, imaginative world-building is a vital element of fantasy — but also that every character is a world unto herself.

Read an excerpt of The Fifth Season