Accessibility links
A Community Built Around Older Adults Caring For Adoptive Families A neighborhood in Rantoul, Ill., offers older adults a break in rent in exchange for six hours a week helping families with adopted foster kids. And the model is catching on. 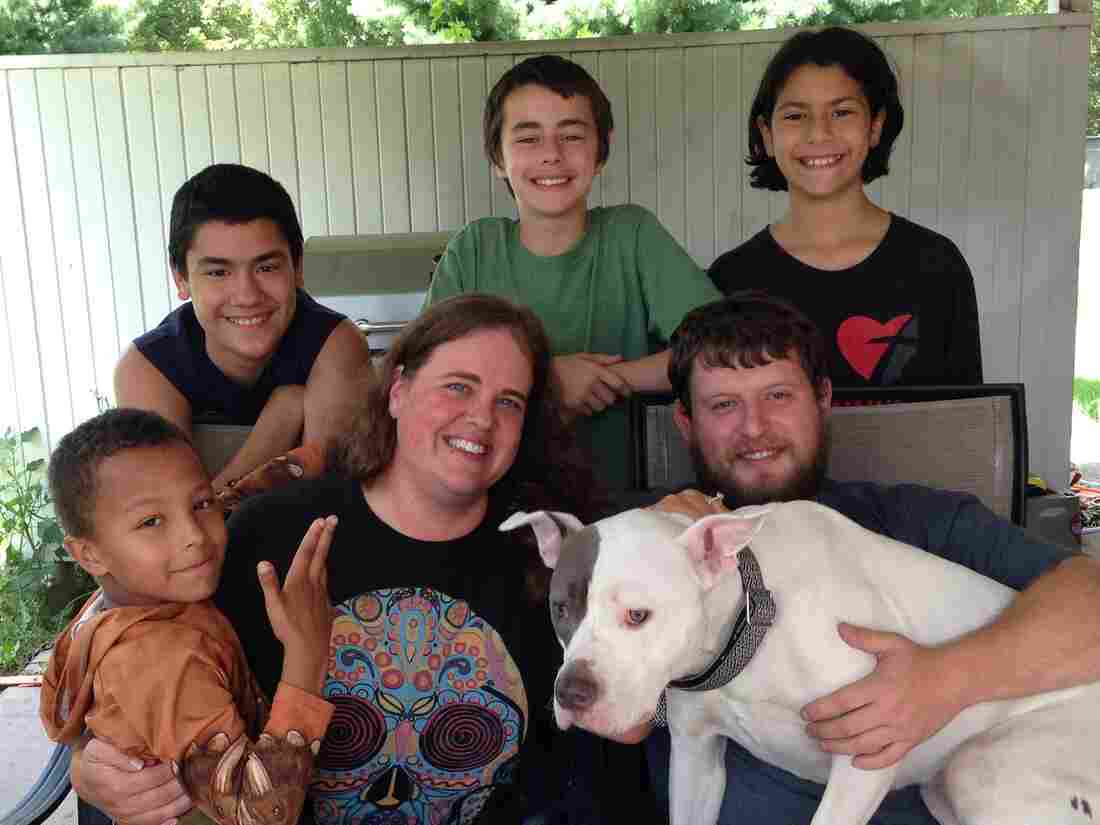 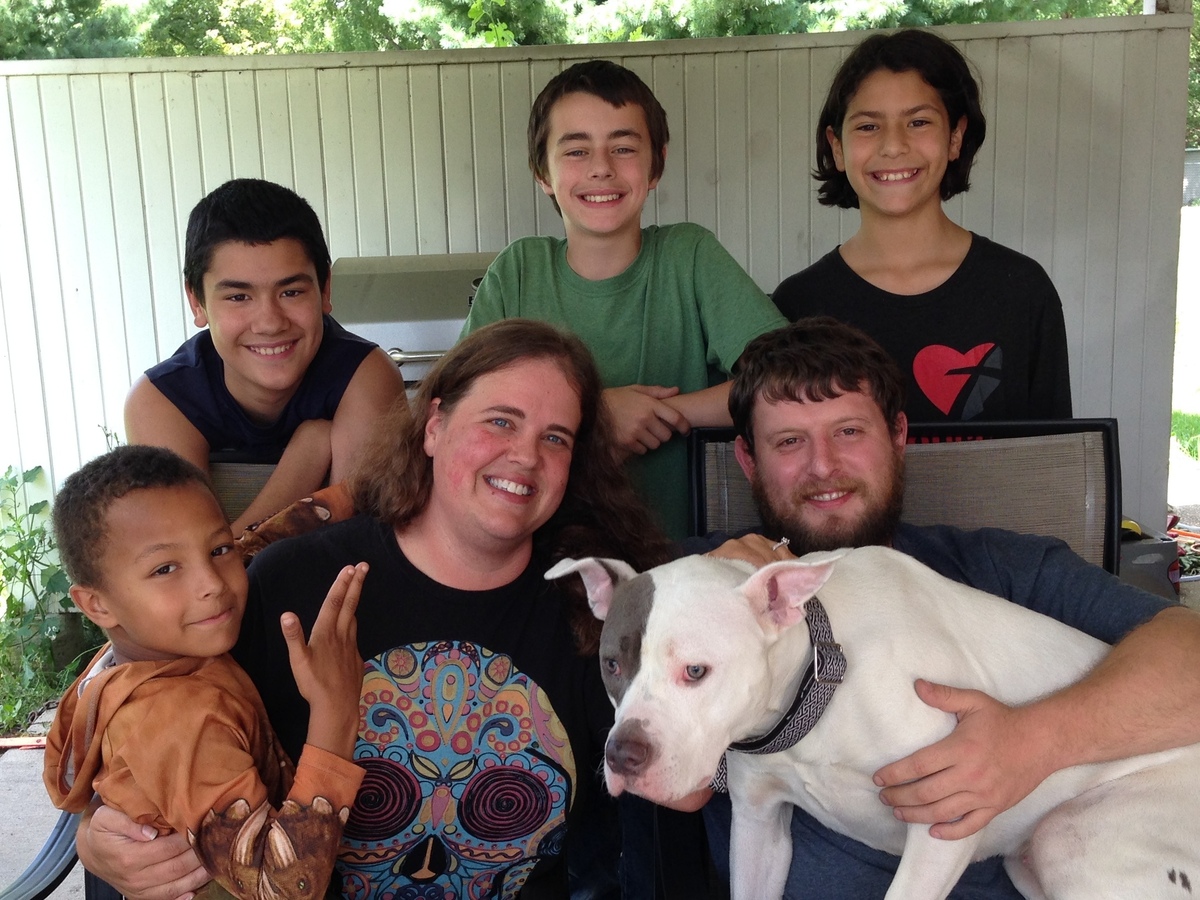 Whitney Gossett (seated, center) sits with her children (clockwise) Jeremiah, 7, Andrew, 12, Patrick, 13, and Bella, 10 — along with her fiance Brad Burtcher.

Families who adopt foster kids need a lot of support. In Rantoul, Ill., families get help in a neighborhood called Hope Meadows from older adults who've moved there just for that purpose.

"It's a good thing that they all got to stay together," she says. "They were talking about having to split 'em all apart and send them to different places until I told them I wanted all of 'em."

Soon there will be a dad in the picture: Gossett's fiancé, Brad Burtcher.

"We just got together in January, but we're getting married in September, and I plan on adopting all of them. So they're my children," Burtcher says. "These are my kids."

But for a few years, it was just Gossett. "I went from single and no kids to having four. It was a big step, but it was well worth it," she says.

Hope Meadows (formerly Generations of Hope) was established 21 years ago to make sure that parents like Gossett wouldn't have to take that big step alone. Of the roughly 40 houses currently rented in Hope Meadows, only 10 are occupied by families who've adopted children from foster care. The rest are occupied by older adults. They get a break in rent for volunteering six hours a week. But a lot of them do more than that.

Carol Netterfield, 70, is one. Miss Carol, as the kids call her, meets Bella Gossett in the community center to teach her to cross stitch. Bella is making a big red heart.

"I wanted to learn how to do this because my mom is getting married, and this card is for her and her fiancé," she says.

Netterfield says she and Bella go back a long time. When Bella was around 5, she started taking her to story time at the library.

"But this little one didn't like story time," recalls Netterfield. "She wanted to read herself. She was hungry to read." And Bella's not finicky. She says she likes "most books." 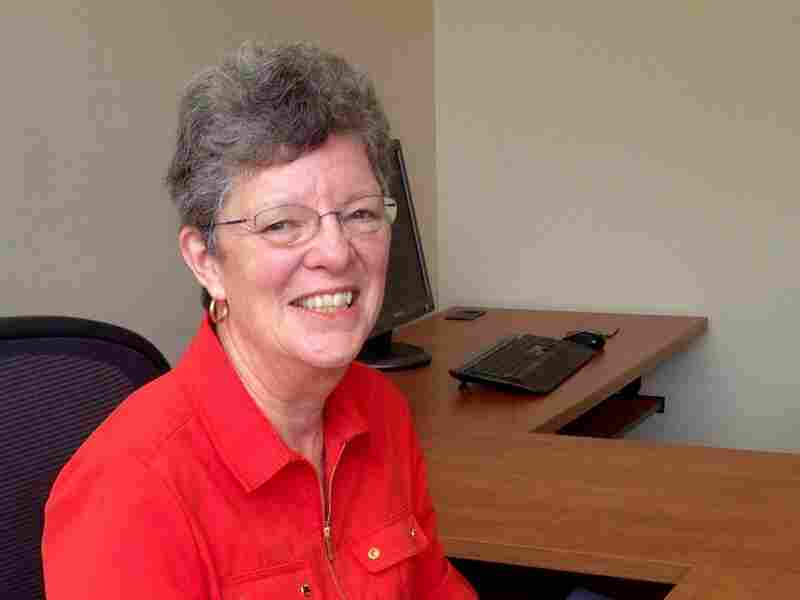 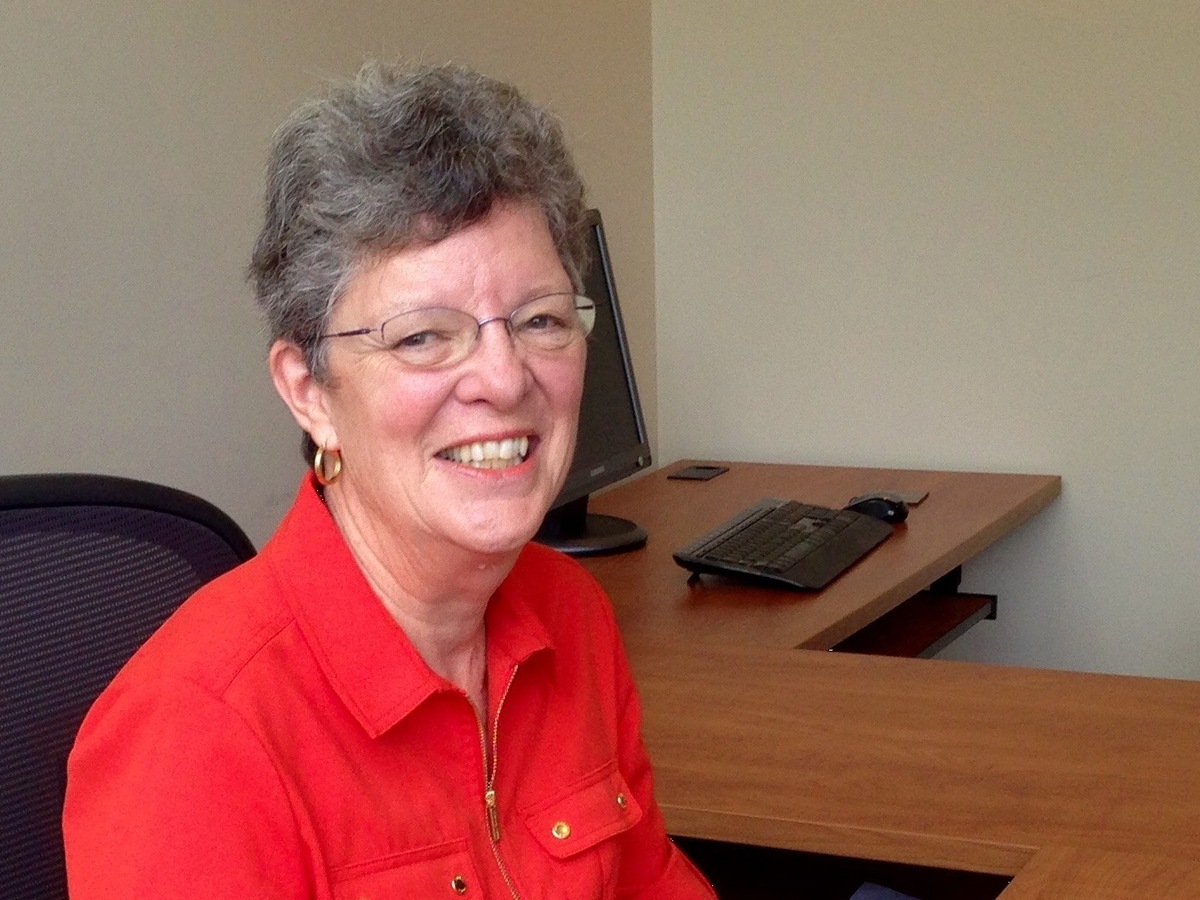 In recent years, communities modeled on Hope Meadows have been created in Oregon, Florida and Massachusetts. And a project called Genesis is under construction in Northwest Washington, D.C. It's adapting the Hope Meadows idea for young women aging out of the foster care system, all of them mothers of small children.

Fernando Lemos is the executive director of Mi Casa, the nonprofit developer that's building Genesis with a combination of public and private funds. "The goal of the program is to put together the two elements, the seniors with the teen mothers, to form a community and to support each other," Lemos says.

Actually, the teen mothers he refers to are not teens anymore. In Washington, D.C., kids age out of foster care at 21.

"Everyone will have to offer at least 100 hours [of volunteer service] every 3 months," Lemos says.

For example, the young mothers can take the seniors to the doctor, and the seniors can help out with child care while the moms are at school or at work. Lemos says that will "provide the support that the [young] mothers need to be successful in the outside world."

There are half a dozen more of these Hope Meadows-inspired communities in the planning stages. In two of them, seniors will be the neighbors of adults with developmental disabilities. And in New Orleans, older adults will live next door to veterans with traumatic brain injuries.

"I am so convinced that we have to do so much more to utilize the time and talents of older adults to address these social problems," says Brenda Krause Eheart, the former University of Illinois professor who founded Hope Meadows.

Now she heads the Generations of Hope Development Corporation, which doesn't actually develop properties but works with those groups establishing similar communities across the country. She says originally, Hope Meadows was just intended to be maybe a dozen families adopting children from the foster care system who would offer each other mutual support.

I am so convinced that we have to do so much more to utilize the time and talents of older adults to address these social problems.

Eheart had been trying to get just 12 houses in Rantoul, Ill., on the Chanute Air Force Base when it was shutting down. But "They said, 'No, we're breaking this base into units,' " she says, "and they said 'you gotta take 82 housing units.' "

Did it ever. "I can tell you that if it weren't for the older adults, that program would have collapsed, absolutely would've collapsed," Eheart says.

As the sun is setting, the Gossett boys are having dinner at the home of another Miss Carol — 72-year-old Carol Veit. And for the first time ever, 12-year-old Andrew is confronting eggplant that has not been breaded and fried.

"But it's brown!" exclaims Andrew. "It looks like mushrooms."

This argument can only happen between people who are really used to each other. Veit has the Gossett boys to dinner almost once a week. They use her iPad to look up recipes to make.

"They can make anything they want that doesn't turn on the oven 'cause it's summer time and that's not sweet 'cause their parents don't like that," she says.

But Andrew doesn't wait until the weekly dinners to see Miss Carol. "I bug Miss Carol every day," he says with a grin. "In fact, Thursday is my day to bug her all day." That happens down at the Hope Meadows office where she works on Thursday mornings. "And I'm bugging her from the time I get down there until 1 o'clock," Andrew says, barely mentioning that he also helps her get out the community newsletter.

Before she retired, Veit was a physical therapist in schools in the El Paso area. So she's been around kids her whole life.

"Yeah, I knew what they were like before I got here," she says with a laugh. "And they were what I expected."

But they're the kind of "hard time" you only give someone when you know them well — and you really care about them.

In the audio of this story, as in a previous Web version, we say Genesis is located in Northeast Washington, D.C. It is in Northwest.