Accessibility links
Review: 'Two Across' By Jeff Bartsch Jeff Bartsch's new novel is about a brainy couple who, after meeting at a 1960s spelling bee, conduct their troubled love affair through secret clues in the crosswords they compose for newspapers.

'Two Across' Spells Out A Charming Love Story In Crosswords

'Two Across' Spells Out A Charming Love Story In Crosswords 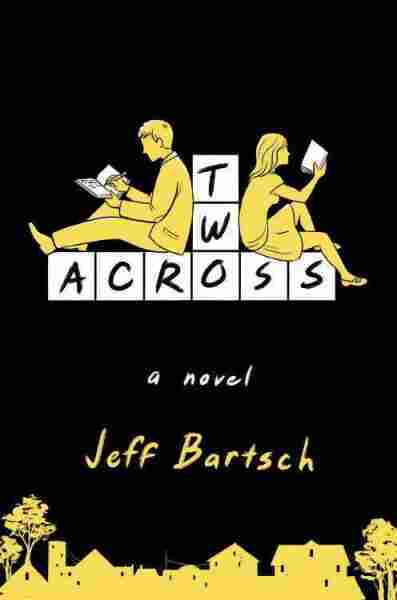 My perennial quest for smart, fun summer reads landed me on Two Across, Jeff Bartsch's debut romantic comedy about a brainy couple whose on-again-off-again relationship begins at age 15, when they tie in the 1960 National Spelling Bee. During their recurrent off periods, they send hidden messages to each other in the clever crossword puzzles they compose for major newspapers.

Both Vera Baxter and Stanley Owens are the products of idiosyncratic childhoods, reared by hovering single moms. Vera, a brilliant mathematician, has spent a lot of time on the road in cheap motels with her mother, a hard-working traveling sales assistant striving for promotion in an era when glass ceilings were at crawl space levels.

Stanley, on the other hand, lives with his agoraphobic mother in a complimentary suite at the Hawthorne Hotel in Washington, D.C., where his father, whom he never knew, served as concierge before disappearing in Normandy in 1944. His mother is a proofreader for a publishing company, a job she can do without leaving her favorite chair. She has mapped out a future for her smart son, including Harvard and an eventual senatorship. The trouble is, his sole ambition, which doesn't square with hers, is to write crossword puzzles.

But Stanley is clueless when it comes to love. In a ridiculous scheme to dodge college and pursue his lexical dream, he cooks up a faux wedding to Vera — failing to notice that their feelings for each other are real. Their fraudulent marriage is the first of many "origami lies" that fold in on each other, creating an elaborate booby trap of missteps. Hurt time and again by Stanley's lamebrained failure to makes things right, Vera repeatedly flees with no forwarding address; by my reckoning, her CV should list six universities.

The best parts of Two Across are the ingenious crossword puzzles through which the estranged couple periodically reconnect. Themes like "Partners in Crime" or "Just Friends" chart the stages of their relationship. Besides the crossword puzzle mainstays, "aloe___" (VERA) and "Erle­­­ Gardner" (STANLEY), the puzzles are filled with clues to their shared past, such as "City where loads of laundry are done?" (WASHINGTON) and "A type of Holly" (BUDDY). One tip-off to Vera's whereabouts reads: "Where you'll find Water Lilies." The answer: MFABOSTON.

Two Across is an excellent title for a book that revolves around crosswords, cross-purposes and a couple stumped by love. Bartsch doggedly works his themes: secrets, deceptions and fraud versus honesty and true love. His tightly constructed book is crammed with jabs at politicians, entitled rich people, workaholics, businessmen who profit by purveying junk, and college students too lazy or dumb to do their own work. To give you some idea of the playful mechanics of his storytelling, let me just say that an invisible ink pen dubbed Socrates plays a starring role.

And there are some lovely images early on: A brainy 13-year-old spelling bee contestant with "spectacles thick as security glass ... tested the letters as if stepping out on a frozen lake." But for a book about strained relationships and the frustrations of damaging lies, the language is flatly modulated, tending toward summaries and emotional dodges as opposed to actual cross words. Stanley, Bartsch writes, "suspected he had shortcomings in matters of the heart" — a failing that carries over into this novel.

Despite its considerable promise, Two Across has trouble sustaining the necessary emotional pitch when wordplay isn't involved. Several plot developments (which I'll leave readers to discover for themselves) are neither as subtle nor as beguiling as the cunning puzzles. Two particularly head-scratching narrative moves include a sappy surprise revelation and an abrupt coda.