Accessibility links
Review: Grace Potter, 'Midnight' On the singer's new album, a departure from the rootsy sounds of her albums with the Nocturnals, pop-rock music gets a real kick in its cherry-red pants. 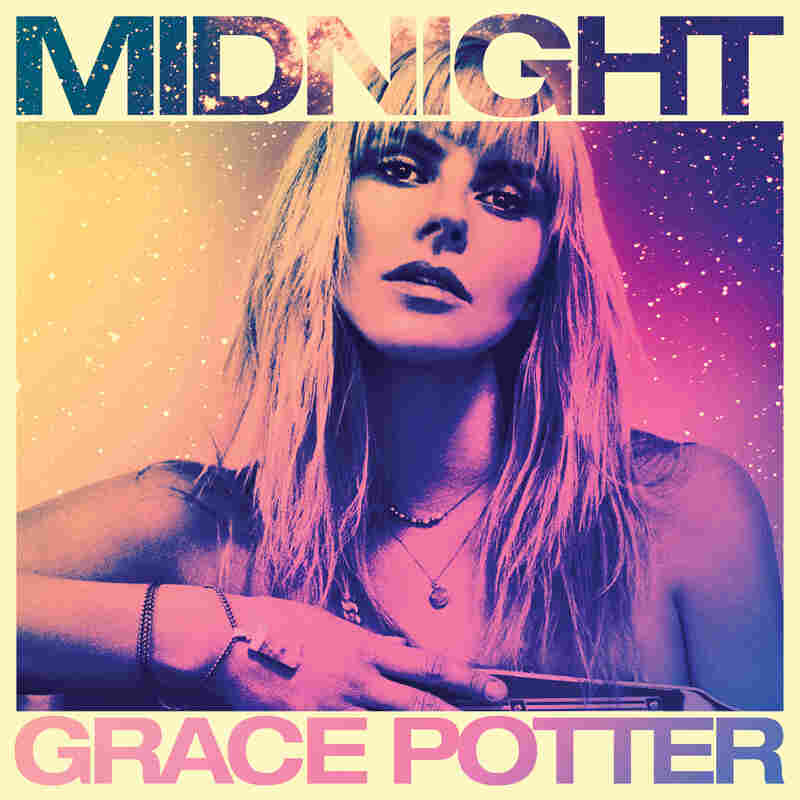 All hail pop rock! Few categories in contemporary music are more maligned, yet what resides within this one can be tremendously energizing, adventurous and fun. The term "pop rock" affixes itself to all kinds of things — new-wave songs by women celebrating the weekend, like the Go-Go's "We Got The Beat"; boy-band charmers with a little extra kick, like One Direction's "Little Black Dress"; dance songs with guitars, like Donna Summer's "Bad Girls"; stuff by guitar bands that takes an open-minded turn, like Def Leppard's "Pour Some Sugar On Me." Some people think it's too shiny and too cheap, but it's actually inclusive and progressive; it's a party that's a little messy; it's sincere. And in Grace Potter's hands, on her first solo album Midnight, pop rock gets a real kick in the cherry-red pants.

Potter has risen in the rock world leading the Nocturnals, a super-solid band that's proven versatile enough to integrate plenty of soul, but which always goes back to the basic rock riff. Within that group, Potter became known as a belter and a strutter, with a dynamic range that could get a little overwrought. Potter has proven her versatility guesting with everyone from Kenny Chesney toThe Rolling Stones, but she clearly needed a new main collaborator to break out of her sweet spot. Working with L.A. producer Eric Valentine on Midnight, she remains her aggressive, earthy self while getting playful in new ways. With its songs about sex and dancing, self-confidence and risk, Midnight is a mid-career turn for Potter that proves genuinely freeing.

"Your Girl" and the aptly named "Delirious" reference Prince circa 1999, while "What We've Become" shows traces of MGMT's "Electric Feel." "Empty Heart" connects to the contemporary country sound of Little Big Town. There's a trace of Tom Petty here, a nod to Paramore there. The time- and genre-hopping sound makes sense, given Valentine's resume: He's worked with Nickel Creek and Good Charlotte and Queens Of The Stone Age, and because he started out as a drummer, his eclecticism shows in Midnight's colorful rhythmic palette. Matt Burr, drummer for the Nocturnals and Potter's husband, keeps his kick drum on alert, as the grit of rock 'n' roll remains central to Potter's approach. But in these songs, it's a grounding element, not an obligation.

Potter and the musicians who joined her at Valentine's celebrated studio, Barefoot — including most of the Nocturnals — obviously relish stepping away from the guitar-jam prerogatives of the summer-shed touring circuit and trying out synths, sequencers and arrangements that are chock-full of experiments, yet don't feel too busy. Potter's powerhouse voice remains central, and it's a blast to hear her try out being more conversational or funky. "Sing hallelujah or sing any song you want to hear," she intones in the sparkling ballad "Nobody's Born With A Broken Heart." She's doing just that.