Accessibility links
Review: 'Black Chalk' By Christopher Yates Black Chalk hinges on a plot twist that we won't give away. But we will say it's the summer thriller we've been waiting for: about a teenage game that turns dangerous as its players become adults. 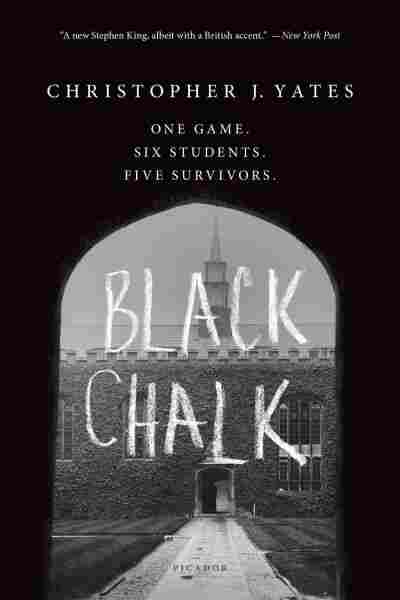 I don't want to say a single thing about this book — about Black Chalk, the debut novel from Christopher Yates, who writes like he has 30 books behind him; like he's been doing this so long that lit games and deviltry come to him as natural as breathing.

I don't want to say a word. And not because I don't love the book (I do, deeply and weirdly), but because I want you to go into it cold, knowing nothing and expecting nothing, like I did. I want you to suck it down in one breath, like a lungful of dark water. For it to hit you the same way it did me: like a sucker punch delivered slowly and with exquisite precision.

Spoilers? No, not this time. Under normal circumstances I have no problem giving things away. That's my business, after all — tempting you enough to read the books that are awesome, scaring you away from the ones that are terrible. The trick comes in knowing which secrets can be revealed and which ones to hold close. It's a balancing act.

But Black Chalk is not normal. Black Chalk has, somewhere around the turning of its first quarter, one of the greatest surprise reveals I've witnessed. A twist that's like screwing your head on backwards. And when you see the tricky switch Yates has pulled, you just want to kiss him, because dammit if there isn't something sweet and satisfying about a plot twist pulled off with aplomb.

So I'm going to be uncharacteristically careful here. Circumspect, you might say, and stingy with what I reveal.

Black Chalk is a story about students at the fictional Pitt College at Oxford — six of them, freshers all, five Brits of varying tempers and varying levels of damage, and one American exchange student called Chad.

Very early on, Chad meets Jolyon — the golden boy — and the two of them instantly become best friends in the way that only young men away from home can. Jolyon knows everything, is beloved by everyone, exists with a slightly higher gravity than anyone else in the world and, thus, draws orbiting bodies to himself. He has a bar in his flat and good hash, lends books, never locks his door. People love him, but Chad (shy Chad) was first and Chad (awkward Chad) was best and the two of them, they're inseparable.

We're still in safe territory here. Nothing vital given up.

In a quiet week — once they have told all their best stories to each other and (some of their) secrets — Chad and Jolyon begin thinking about a game to liven things up. Cards, dice. Yates is never clear about the mechanics because the mechanics don't really matter. There will be a cash prize for the winner—10,000 pounds, no small amount for a student. A series of dares and humiliations that must be endured by those who play poorly — nothing illegal or physically harmful, just tests of will and of the mind. At least at first.

They gather four more players. Find backing in the form of a mysterious society called Game Soc that presents itself as an extracurricular club at Pitt but is actually something ... more. And then the game (which quickly becomes The Game) begins.

And now we find ourselves in dangerous waters. To say more would be to brush up against the edges of ruin. Six students. High stakes that begin with money and quickly become something much darker. Can you trust me that Yates is a beautiful writer without me offering you a quote? How about just a small one, full of dread but giving away nothing?

"But it was never supposed to be that sort of game."

Oh, but it's never supposed to be that kind of game. But that's how they sometimes end up, isn't it? No one ever writes a book about a game of tiddlywinks that doesn't end in murder.

Yates splits his narrative between Pitt in the 1990s and the present day. The narrator is untrustworthy, drunk, medicated, seriously mentally ill. He hides none of this. He tells reader that he believes someone is sneaking into his room and changing his story as he writes it. He might be right. He says that he is a liar. That he is trying to confess things, but struggling. That The Game never really ended. That it is still going on and he has to see it through to the end. Because it truly has become that kind of game.

And that's it. That's all I'm going to say. But trust me (because I'm no liar, and certainly not drunk right now): This is the smart summer thriller you've been waiting for. The black and harmful little book you want in your carry-on. The novel you should be reading tonight.

Because The Game never really ends. It's out there, just waiting for you to make the first move.